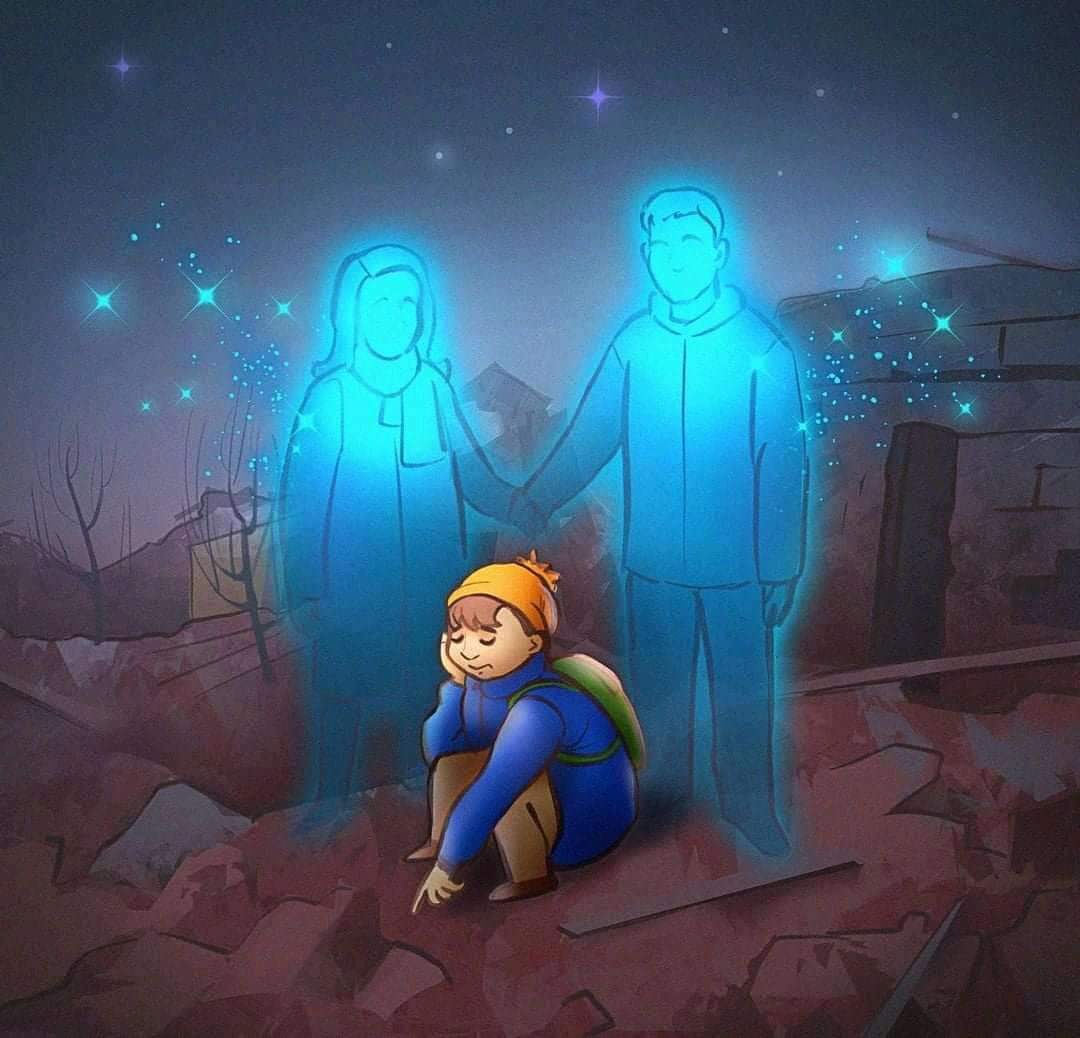 This is Oksana Leontieva, a doctor. Yesterday morning she brought her 5 y.o. son to a kindergarten and went to her work in the National Children's Hospital. On her way she was killed by a Russian missile attack in the centre of Kyiv.

Russia’s aerial bombardment of Ukrainian civilians and civilian infrastructure is now in its second day. It is, as we discussed last night, the specialty of Putin’s new theater commander General Surovikin. The emerging consensus, which I think is the correct assessment, is that the new Russian theater strategy is to destroy as much of Ukraine’s infrastructure, especially power generation and transmission and the water system, but also residences or any place Ukrainians could shelter, before winter. By doing so Putin and Surovikin are trying to set the conditions to freeze out the Ukrainians over the next several months. I don’t think that’s going to work, but it appears the Russians are going to try.

Energy infrastructure objects were hit in Lviv, Vinnytsia Obl. Great damage was caused in Dnipro Obl; residents are called on to save powerhttps://t.co/qks2wQGBZV pic.twitter.com/4MG7ZbITTt

My understanding is that once again the Ukrainian air defense intercepted the majority of incoming Russian attacks.

The enemy launched a second wave of terrorist attacks against our country.

As of this morning, there were 28 missiles, of which 20 were shot down. More than 15 drones, almost all of them are Iranian combat drones. Most were shot down.

I am thankful to all our warriors of the Air Forces, Ground Forces and Intelligence involved in defense against these Russian strikes!

And, by the way, at the request of the military command, I want to celebrate soldier Dmytro Shumskyi (anti-aircraft missile platoon of the 57th separate radio engineering battalion, Chernihiv direction) for yesterday.

On October 10, Dmytro Shumskyi showed excellent skills and reaction and shot down two terrorists’ cruise missiles with the help of Stinger MANPADS.

One person saved dozens of lives. Thank you for that!

Restoration works are taking place quite quickly and efficiently throughout the country.

If it wasn’t for today’s strikes, we would have already restored the energy supply, water supply and communications that the terrorists damaged yesterday. And today, Russia will achieve only one additional thing: it will delay our recovery a little.

And I thank everyone who, at their level, provides recovery after terrorist attacks.

I am grateful to the rescuers – more than a thousand employees of the State Emergency Service, who immediately arrived on calls and began neutralizing the consequences of terrorist attacks.

At the suggestion of the Minister of Internal Affairs, I would like to especially note the selfless and determined actions of senior ensign Borys Shapovalov, commander of the department in the Zaporizhzhia region; sergeant Oleksandr Smiyan, firefighter-rescuer, Zaporizhzhia region; ensign Yuriy Lozynskyi and junior sergeant Oleksiy Biletskyi, respirator workers of the mining and rescue department, Kyiv city.

I am grateful to all the doctors who helped the wounded and injured!

I am grateful to all energy workers and utility workers for their high-quality response and quick work.

The government controls all this – we are trying to restore normal conditions as quickly as possible.

I would also like to thank all Ukrainians who listened yesterday and limited their own electricity consumption during peak hours – from 17:00 to 22:00.

Thanks to our conscientiousness, we managed to save a tenth of the energy on average in the country, which allowed the system to work more stably. And our goal should be to save a quarter of electricity precisely during these peak hours.

It should be done today and in the near future.

Please postpone the energy consumption of appliances that require a lot of electricity to other hours of the day. It is not difficult for an individual, and it gives a great result within the scale of our entire country.

I took part today in the extraordinary summit of the Group of Seven, which was convened by the German presidency on our initiative.

We discussed the response of the most powerful democracies to this new Russian escalation.

Tomorrow, the defense support for Ukraine will be discussed in the “Ramstein” format. I expect progress from our partners on the issue of air and anti-missile defense, agreements on new supplies of other weapons and ammunition we need.

The terrorist state must be deprived of even the thought that any wave of terror can bring it anything.

A separate task for intelligence is to establish all those involved in these missile attacks against Ukraine, in schemes with Iranian drones.

We also have a detailed statement from the Group of Seven, in particular, that all those responsible for terror against Ukraine will be brought to justice. Starting with the current political leadership of Russia and ending with everyone who serves these terrorist interests.

Mankind and humanity are stronger than any terrorists. I am thankful to everyone who fights and works for our victory!

And one more thing. Today, 32 of our warriors were freed from Russian captivity. We do everything for Ukraine – possible and impossible. Gratitude to everyone who worked for this result!

Glory to our beautiful people! We will restore everything that was destroyed! 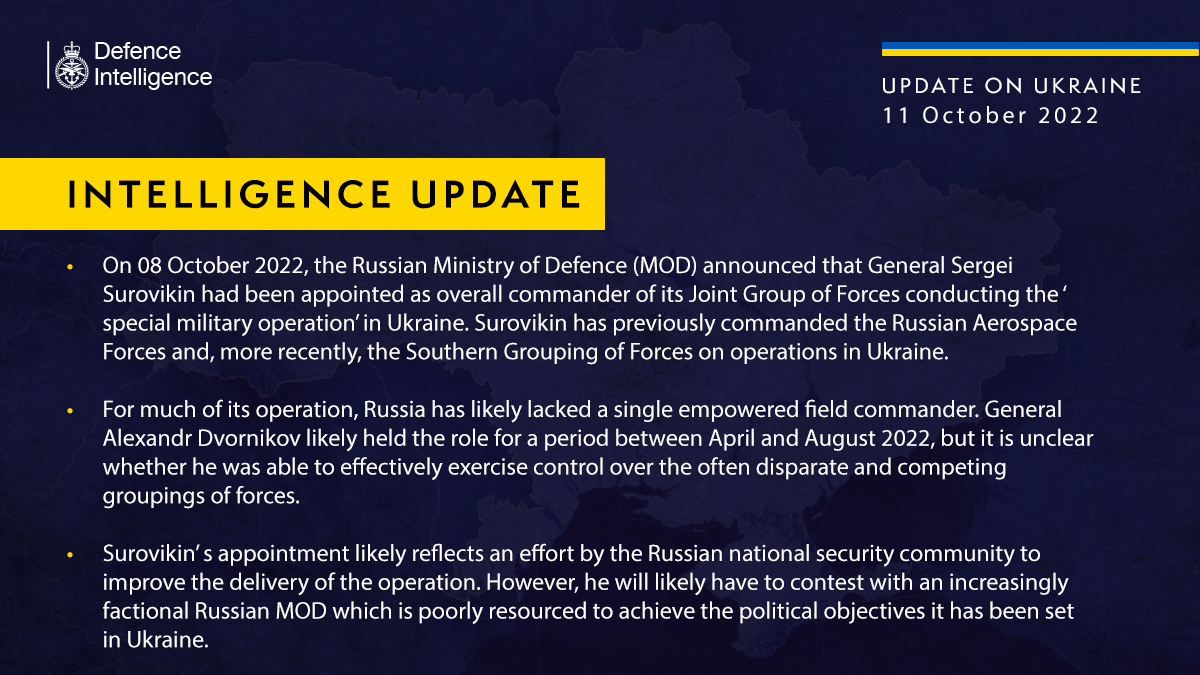 They have posted an updated map, but nothing has really changed on it so I’m not posting it.

Here is former NAVDEVGRU Squadron Leader Chuck Pfarrer’s most recent assessments of the situations in Kherson and Izium:

KHERSON/ 2145 UTC 11 OCT/Overhead imagery reveals that RU engineers have established a pontoon bridge across the Inhulets River at Daryivka, replacing the destroyed P-47 HWY bridge. This crossing is vital to transport troops and logistical support to RU units east of the river. pic.twitter.com/156fvbKjze

IZIUM/1200 UTC 11 OCT/ UKR has cut the H-26 HWY at Krokhalne, threatening Svatove. In response, RU units have flattened their lines to maintain control over the vital P-66 HWY, the principal north-south line of communication and supply (LOCS) in the Kupiansk-Izium sector. pic.twitter.com/T9KykIIyOe

4 additional HIMARS from our 🇺🇲 partners have arrived!
I thank @POTUS Joe Biden @SecDef Lloyd Austin III & the American people.
HIMARS time:good time for Ukrainians and bad time for the occupiers.
Great news on the eve of #Ramstein 6, where I’m going tomorrow. There will be more.

And personal thanks to my colleague 🇩🇪 Minister of Defence @BMVg_Bundeswehr Christine Lambrecht for her partnership and strong commitment to supporting Ukraine. We will win.

The NATO and non-NATO allies supporting Ukraine need to really step up the transfer of air defense systems so that the Ukrainians can established a proper, layered air defense network. I honestly do not understand the calculus in DC, London, Paris, Berlin, and other allied capitols that delayed this being done until now. Despite Ukraine’s successes in the defense of Kyiv, in pushing the Russians back in Kharkiv, and in chewing away at them in Kherson; that these more advanced air defense systems are just now getting to Ukraine 9 months into the war just mystifies me. I just do not understand the strategic thinking here.

European Commission President Ursula von der Leyen condemned the Russian firing of cruise missiles at cities across Ukraine which killed a number of civilians and knocked out power and heat pic.twitter.com/ODwhtKBHWj

been far too long since a russian general has been killed, if you ask me pic.twitter.com/WJekNSUd6n

There was a time we expected the Russian people to criticize their government for killing Ukrainians. Instead we see them complaining that the attacks are too weak and rejoicing at our destroyed playgrounds, concert halls and universities.

Sorry, been a bit quiet recently, just a bit overwhelmed.

Here's "DPR" separatist and terrorist Pavel Gubarev stating he will kill millions of Ukrainians possessed by demons, and even exterminate them all if need to be. pic.twitter.com/RTThje9mho

I’m sure everyone is waiting for me to get to the big news of the day. Vice has reported that, according to Ian Bremmer, Elon Musk told Bremmer that Musk had a conversation with Putin prior to beginning his pro-Russian/anti-Ukrainian tweet storm.

Elon Musk spoke directly with Russian President Vladimir Putin before tweeting a proposal to end the war in Ukraine that would have seen territory permanently ceded to Russia, it has been claimed.

In a mailout sent to Eurasia Group subscribers, Ian Bremmer wrote that Tesla CEO Musk told him that Putin was “prepared to negotiate,” but only if Crimea remained Russian, if Ukraine accepted a form of permanent neutrality, and Ukraine recognised Russia’s annexation of Luhansk, Donetsk, Kherson and Zaporizhzhia.

According to Bremmer, Musk said Putin told him these goals would be accomplished “no matter what,” including the potential of a nuclear strike if Ukraine invaded Crimea, which Russia annexed in 2014. Bremmer wrote that Musk told him that “everything needed to be done to avoid that outcome.”

Bremmer wrote that Musk said he had refused a Ukrainian request to activate Starlink in Crimea. According to UK newspaper the Financial Times, Ukrainian forces have reported connectivity issues as they continue their counteroffensive into areas previously held by Russian forces in the east and north-east of the country. Musk responded by criticising the FT’s reporting, saying that what happens on the battlefield is “classified.”

The Ukrainian response to Musk’s Twitter peace proposal was succinct – one diplomat told him to “fuck off,” while Ukrainian President Volodymyr Zelenskyy posted his own Twitter poll.

Since Vice published their reporting, Musk has denied it by tweet – of course – and Bremmer tweeted out that he stands by his remarks:

No, it is not. I have spoken to Putin only once and that was about 18 months ago. The subject matter was space.

elon musk told me he had spoken with putin and the kremlin directly about ukraine. he also told me what the kremlin’s red lines were.

i’ve long admired musk as a unique and world-changing entrepreneur, which i've said publicly. he's not a geopolitics expert.

This is not exactly news. The Economist‘s Oliver Carroll broke this story last week:

Also: Ukrainian officials told me Musk turned down request to use Starlink over Crimea. They would not tell me for what purpose. As I also wrote — @FinancialTimes later expanded on it— Ukrainians started experiencing problems w Starlink shortly before Musk’s strange Twitter foray

From this, it seems Putin's conditions *to start* negotiations with Ukraine are "let me dismember your country and accept all my other demands" pic.twitter.com/GuXLALcQgf

Also, it seems Putin told Musk that he had no interest in Kherson and Zaporizhzhia – which he's decided are Russia, except he's not sure how much of it – except as logistical buffers for Crimea

It will not scare us. Ukrainians will fight until the last breath of the last Ukrainian. https://t.co/xEgNYlkZqI

And a new video from Patron’s official TikTok!

♬ Bundle of Joy (From “Inside Out”) – Benny Martin

The caption (machine) translates as:

Take care of yourself and your loved ones! Do not ignore the air warning signals. Safe warm skiing for everyone ❤️ #SlavaUkraini #PatrontheDog