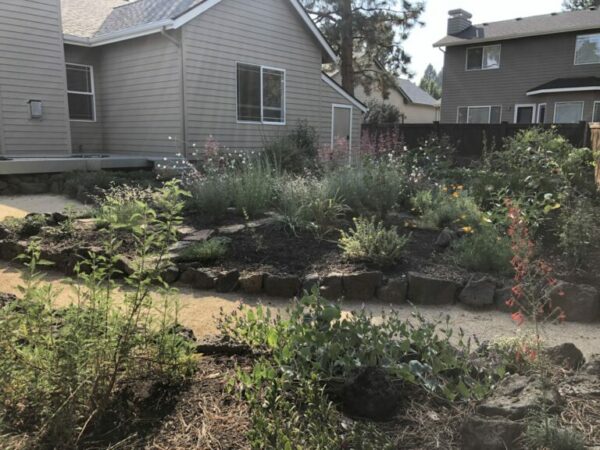 We bought a house 2 years ago that was fairly neglected, especially the landscaping.  I knew I was going to end up replacing 95% of the existing landscaping, and because this is a high desert area in central Oregon, I knew it would need to be a xeriscape transformation. And, after having had a xeriscape with no grass for 16 years at our old house, there would be no grass to mow here either.  The average annual precipitation here is 12-15 inches, while keeping a green lawn here requires 35-40″ of water because summer rains are rare here, and we are in drought conditions with a declining water table.  I’ve been using xeric planting ideas since the two summers I worked for a xeric landscaper in the early 1990’s (where I learned about drip irrigation), so I was pretty sure I could do a full yard transformation and make it work.

I started with the backyard and have worked my way into the front; the front will have to wait for another series because its still in a state of mostly dirt with only part of the hardscaping completed.

For the backyard, the first step was salvaging what plants I could… and then realizing that the native soil is so rocky and hard, plus almost completely deficient in organic matter, that building raised beds is truly the only way to garden here.  Xeric plants require excellent drainage, and the native soil drains very poorly because not too far below the surface it is basically solid basalt.  The good news is that people are constantly trying to give away basalt chunks from their projects, so I had a ready source of rock to build my beds with.

I added soil, installed my drip irrigation system (with pressure reducers at the sprinkler valves) and then a layer of compost from the city’s composting facility as the mulch.  I started 1/3 of the plants from seed under grow lights, and bought 1/3 from a local nursery that exclusively sells native plants, and the remaining 1/3 from a xeriscape mail order nursery I’ve used since 1996.

I wish I had taken better “before” photos; what this post consists of is a set of “before and after” photos that will hopefully be understandable.

LOOKING TOWARDS THE HOUSE THE DAY AFTER WE MOVED IN – OCTOBER 31, 2020 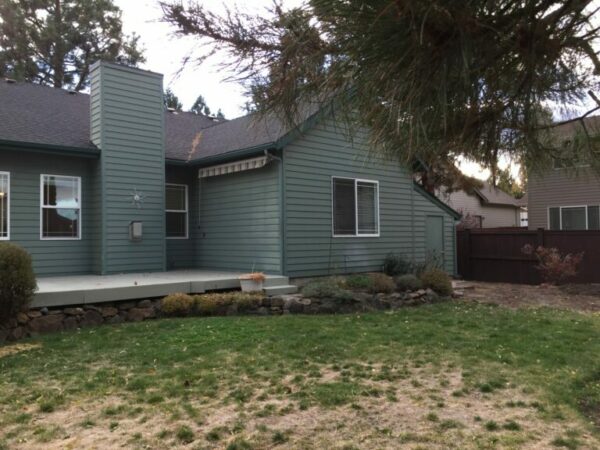 This photo gives you a little idea about the state of the grass and the overgrown shrubs; pretty neglected, with grass invading all the existing border beds.

BACKYARD, LOOKING THE OTHER DIRECTION FROM THE HOUSE – MARCH 31, 2021 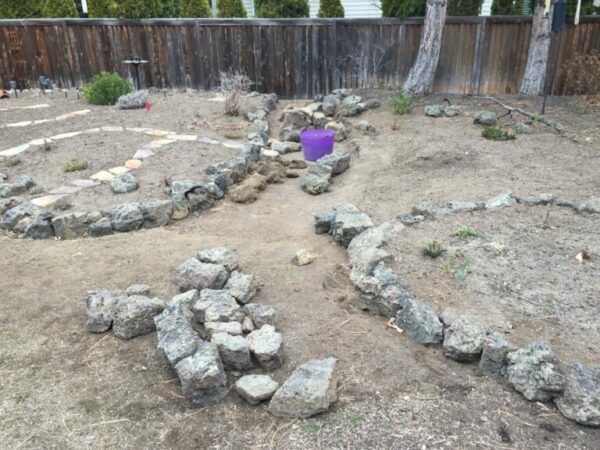 This is a hint of what it took to build the raised beds with basalt chunks.  Unfortunately this photo is looking the opposite direction from the first one, but it gives you an idea of how I spent the spring and summer of 2021!

I think I totaled 24 loads in our Subaru Outback of free boulders over the months. I got lucky and found a guy with a huge source of them that were nicely gray with age and covered in lichens; I tried to build with an eye towards showing the ones with the best lichen coverage in prominent places.

My goal was to get everything done so that all I had to do in the spring of 2022 was plant perennials, and I was able to plant a row of shrubs along the back of the yard in the fall of 2021 to give them and extra jump on growth.  It will be another few years before the Mock Orange, Serviceberry and the Greenleaf Manzanita (that was already here when we bought the house) reach full size. 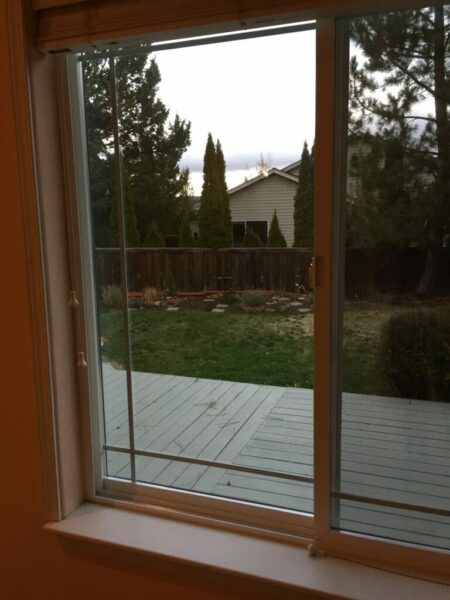 As I designed the garden plantings last winter, I made an extra point to carefully choose the plants for the view from the main windows in the rooms where we spend the most time.  This is the view into the backyard from the living room, so I thought long and hard about how I wanted this to look. 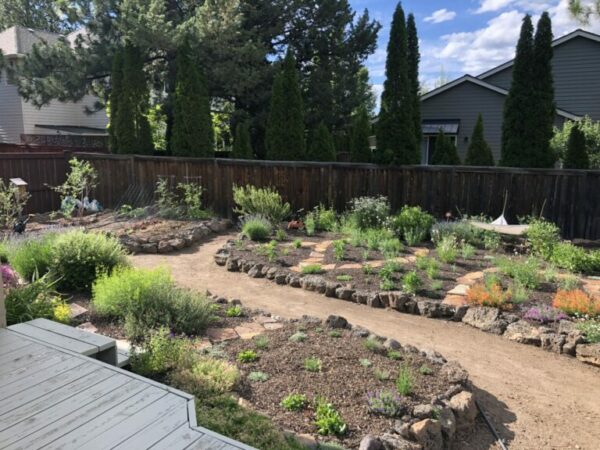 This photo was taken late this spring from the same location as the last, but outside the house at the same window.  Eventually this deck will be removed and a ground level patio built so we can be “in” the garden instead of above it. 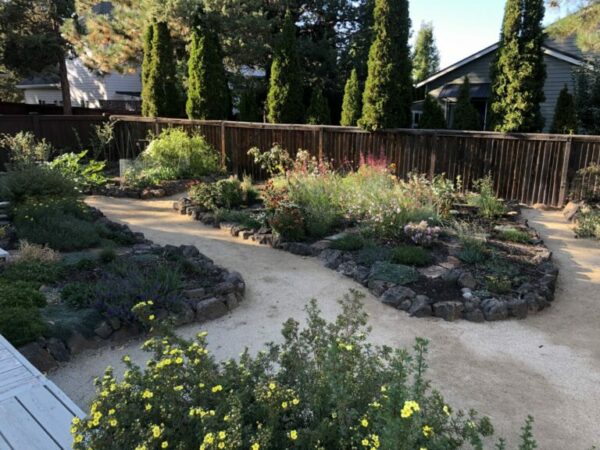 This is the same view as the last photo, but taken last week with some of the later blooming plants coming into their best period. In between the last photo and this one, the pathways were covered with decomposed granite as the pathway material.

I have built with flagstone before, but source of flagstone are very far away from this part of the US west and very expensive. So I used a few pieces as stepping stones inside the bed, and used this compacted-in-place material to keep the weeds and the dust down.
======

This is how the backyard looks right now, at almost the same view as the first photo in this post.

About half of the perennials have already reached full height, and will likely fill out more next year. The remaining plants will take another year or two, and some of the more woody natives (like a few kinds of Sulfur Buckwheat and Salvia, plus xeric penstemons) will take at least another year.

The tall pinkish orange flowers in the distance are a version of Agastache Rupetris called “Apache Sunset” that I grew from seed under lights; I think the long, cool and wet spring we had let these baby plants do just as well as many of the year old perennials I bought.

The tall scarlet flower in the right of the photo is the wildflower Scarlet Bugler, a biennial that I will be sure to collect seed from to get more of those beauties started for next season. 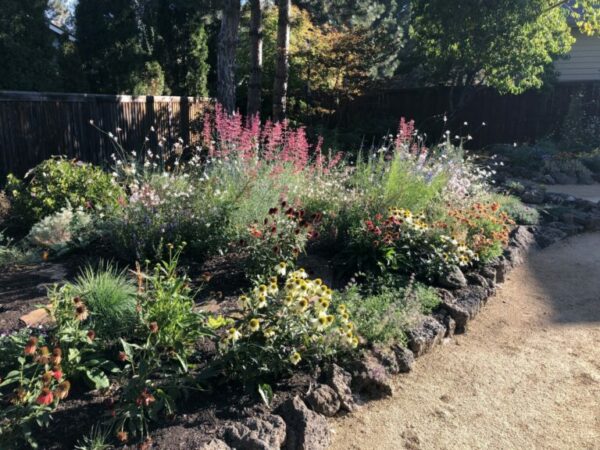 I’ve thought a lot about it since then, and I suppose it’s half the process of creation and puzzle solving that I love, and the other half is the beauty I enjoy every time I pass by the garden.

I hope to encourage others to save water in our desert environment by showing them you can have what looks like an English garden that takes minimal water.  I selected the plants based first the amount of water they need, and second if they were good sources of food for bees and hummingbirds.

The bonus is all the cover they provide for our roving flocks of California quail; I’ve learned their calls and I can tell when they are on the way to our part of the neighborhood.  If you sit still, they don’t see you and you can get a nice closeup view of their flock dynamics; they move like a school of fish, with a large male first checking out the area and then calling the rest of the flock to join him. 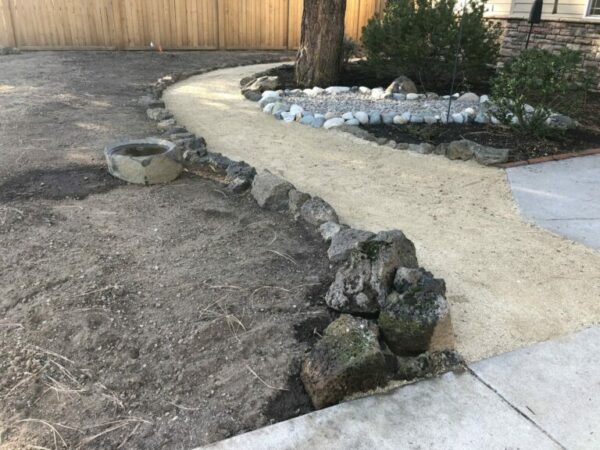 Once the backyard was planted this past spring, it didn’t need much more from me other than harvesting the veggies in their separate raised bed. So I moved on to the front yard once I realized that the landscaper we thought we’d hired to do that yard was never going to come (workers are in very short supply here so I wasn’t surprised).  I decided that was for the best because it let me finish up a lot of connected details, plus save a ton of money!

Previously, I had not been able to come up with a vision for the front yard, but the visit from the landscaper last autumn gave me some ideas and I started to see what I could manage to do. The gravel “pond” in this photo is a infiltration gallery filled with drain stone that I built (enlarged it 3 times but who’s counting?!?) to deal with roof runoff and a very flat grade that left the runoff flooded up against the house in a cloudburst.  The most recent cloudburst in June showed that it is now, finally, deep enough.

The sod removal was one thing I paid someone else to do because when the grass is as dead and dry as this was, well, yuck what a nasty job. And I’m 64, so I can let someone else do the really difficult stuff with a machine I can’t transport or lift easily.

The birdbath is a chunk of columnar basalt wrestled into place, with decomposed granite path material placed between the pathway edges built out of yet more of the local basalt.

I am in the process of spreading the dirt I had stockpiled out to replace what was removed by removing the sod, but I’ll have to get a lot more delivered.

My plan is to get some pallets of the local lichen covered basalt boulders delivered, some raised beds built, and to plant the yard and street strip in 80% native shrubs and native grasses.  The goal is to have the raised beds look like native rock outcrops with the appropriate plants to go with the large Ponderosa pine in the front yard.

How much farther I get on that task list this year is looking pretty limited for a few reasons, one of which is that my back needs a break!  So, probably next spring.  I hope to have a “before and after” post for the front yard for you to look at next year at this time.