You are here: Home / Elections / 2022 Elections / Thursday Morning Open Thread: Why We (Must) Fight 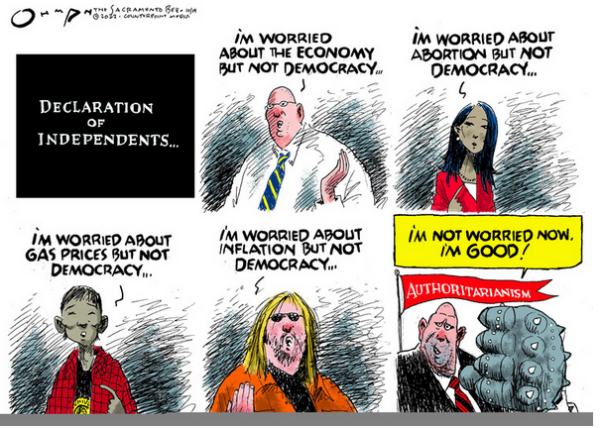 Seriously, too many of our fellow Americans think they’re living in a video game where you can always hit the ‘reboot’ button and start over…

Doocy: What’s your top domestic issue? Inflation or abortion?
Biden: All important. Unlike you, there’s no one thing. There’s multiple issues and they’re all important. pic.twitter.com/Fvh8fhWiqT

There are positive signs!

it might be that 'nothing matters' is bullshit https://t.co/py6ks8YM1v

— a spooky archaeologist and enthusiast of The Queue (@merovingians) October 18, 2022

oklahoma has always, as long as i can remember, been a pretty rough state, and it’s amazing that this is the first time i have ever seen it come up in an oklahoma political debate.

"The fact that Governor Stitt thinks he can command tribal leaders to his office by simply declaring on live television speaks volumes of why he has been a failure at state, tribal relations." 2/2

This project seems a little… elementary… but it’s not intended for high-info news consumers:

Is it legit? Five steps for vetting a news source https://t.co/AXliSGXbi4 @NewsLitProject

On The Road – way2blue – TSAVO NAT’L PARKS, KENYA IN JULY [7 of 8]
Next Post: Margin of Error or Margin of Effort? Let’s Win This!