You can almost set your watch to this stuff pic.twitter.com/UrIwG4AP2m

The image on the right: 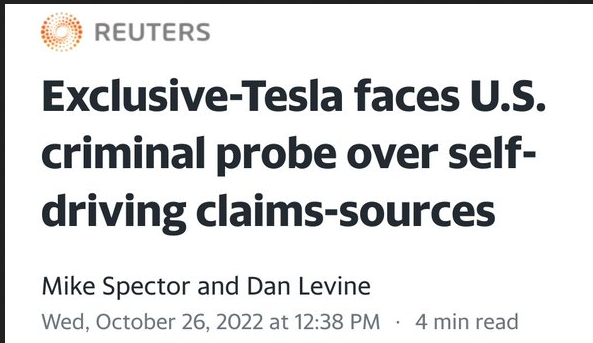 … The U.S. Department of Justice launched the previously undisclosed probe last year following more than a dozen crashes, some of them fatal, involving Tesla’s driver assistance system Autopilot, which was activated during the accidents, the people said.

As early as 2016, Tesla’s marketing materials have touted Autopilot’s capabilities. On a conference call that year, Elon Musk, the Silicon Valley automaker’s chief executive, described it as “probably better” than a human driver.

Last week, Musk said on another call Tesla would soon release an upgraded version of “Full Self-Driving” software allowing customers to travel “to your work, your friend’s house, to the grocery store without you touching the wheel.”…

Musk said in an interview with Automotive News in 2020 that Autopilot problems stem from customers using the system in ways contrary to Tesla’s instructions.

Federal and California safety regulators are already scrutinizing whether claims about Autopilot’s capabilities and the system’s design imbue customers with a false sense of security, inducing them to treat Teslas as truly driverless cars and become complacent behind the wheel with potentially deadly consequences.

The Justice Department investigation potentially represents a more serious level of scrutiny because of the possibility of criminal charges against the company or individual executives, the people familiar with the inquiry said…

The criminal Autopilot investigation adds to the other probes and legal issues involving Musk, who became locked in a court battle earlier this year after abandoning a $44 billion takeover of social media giant Twitter Inc, only to reverse course and proclaim excitement for the looming acquisition…

I think often about that guy in the NY Times/Hulu documentary on musk who was a huge fanboy and trusted the company's claims right up until his "self-driving" tesla couldn't see a tractor trailer in the middle of the road, at which point he, well, died

Now that Tesla faces a criminal probe over it's autonomous tech, this great recent article argued that all self-driving tech firms are basically scams at this pointhttps://t.co/nck45bTsHb

the conclusion is that self-driving tech has one major problem that it simply cannot overcome, and that the companies just fudging their demos to get around this central limitation pic.twitter.com/j5tWak8tBw

'Elon Musk's Crash Course' was the documentary. It was far too kind in terms of perpetuating the supergenius engineer mythology, but it's an interesting watch regarding the early crashes (there's of course been many, many since then)https://t.co/VaQtRXQy3u

But look, over there! I am about to revolutionize social media!…

guy has no genuine idea how the platform he's about to overpay for works, and neither do any of his loyal bitcoin fluffing earlobe nibblers

going to be a very keystone cops esque few years around here pic.twitter.com/JSt2dmC5gS

Of course, Musk is not actually an Afrikaaner — he’s a soutpiel:

War for Ukraine Day 245: The Russians Have Reached the Sloppy Agitprop Stage
Next Post: On The Road – Litlebritdifrnt – Gretna Green