David Letterman Interviewed Volodymyr Zelenskyy in Kyiv. The President became a guest on ‘My Next Guest Needs No Introduction’: https://t.co/bo0IoBJy9P@netflix pic.twitter.com/iFSf0Vbqzn

… Letterman’s interview with Zelenskyy will premiere later this year.

35 weeks of my 3 day war. I've restored Soviet Union. Economy is ruined, everyone is trying to get out of the country & were losing a catastrophic war we blame on USA.

I remain a master strategist

So UKR aid is minuscule

This argument, instead,is to help RU win by cutting off aid by implying it’s a lot when it’s not https://t.co/6MY1y5n0Ml 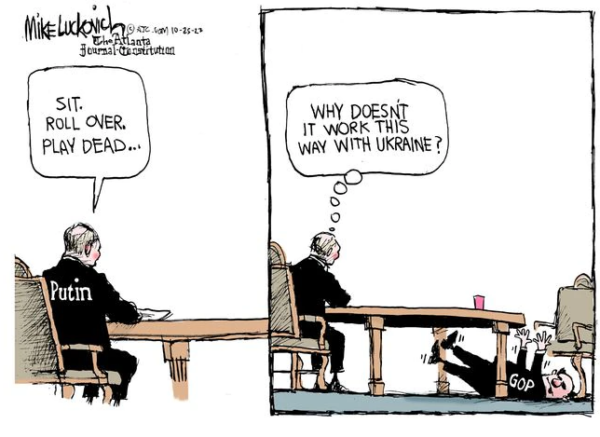 Russian swearing is some of the funniest swearing, but these guys really are screwed. https://t.co/KO3XyKibAK

Russia 2021: fuck yeah, the strong do as they will and the weak suffer what they must

Russia 2022: not fair! The strong do as they will and the weak suffer what they must! https://t.co/cPJELM6j2W

A telling event here was the sanctioning of pro-Russian oligarch Viktor Medvedchuk in February, seizure of his oil pipeline and other businesses and banning of his three TV stations. Russia invaded 5 days later. 2/ https://t.co/wipPVT05I5


Europe correspondent at the Economist:

The corruption frame isn’t the only way to think of what Russia was trying to accomplish by invading Ukraine. But it’s a very helpful paradigm, and in my view the only one that clearly makes sense on its own terms. 3/

A good way to think about it is to imagine Putin as Tony Soprano. He has a racket that extracts wealth from a lot of businesses in the region he controls through a combination of longstanding relationships and the threat of force. 4/

This is the way Putin’s regime operates inside Russia: it seizes or threatens all the country’s major businesses, especially in the energy sector, and awards them to trusted cronies, while skimming off a huge amount of vigorish.* 5/

(*Interestingly “vigorish” comes from the Russian “vygrish” or “winnings”, it seems to have been an Odessa mafia term.) 6/

For a long time this was how Russia’s control of Ukraine worked too. Kleptocratic Russia-friendly networks headed by oligarchs ensured that the gains from corruption in Ukraine flowed to Russia or to people Russia was happy with. 7/

But then Maidan happened, and Ukraine started to turn away. It shifted from the kleptocratic Russian model and towards the rule-of-law-governed EU. 8/

In the Sopranos analogy, a business, let’s say a chain of groceries, at the edge of his territory decided they were going to stop paying protection and start trusting the police. 9/

Tony Soprano obviously cannot tolerate this. It’s not just the loss of revenue: it’s that letting it go unpunished tells everybody else who’s paying him protection money that they can leave, too. 10/

So Tony decides to hit the groceries, take out the owner and ensure a more pliable one is installed, to send a message to anybody else who might get ideas. 11/

Unfortunately it turns out the grocery clerks are packing shotguns and Tony’s soldiers, who were overconfident, get shot up and retreat. Now Tony has worse problems: he’s lost the grocery chain and he looks weak. 12/

Yet he may have inflicted enough damage that his other businesses hesitate to leave; who needs the trouble? Similarly, Ukraine’s economy has shrunk by a third. 13/

Anyway, the point is that if you think about Russia’s invasion of Ukraine as an old-fashioned attempt at territorial conquest, it makes no sense. States don’t gain power by conquering territory anymore, this isn’t the 18th or 19th century. 13/

But if you think of it as a mob hit to intimidate states from exiting the protection racket that delivers corrupt rent streams to Russia’s ruling kleptocrats, then it at least made sense–until Ukraine fought back. 14/14

Apologies, I got the timeline claim made by anti-corruption folks confused. The point was that the first deployment in Putin's building in February 2021 came 2 days after the sanctioning of Medvedchuk: https://t.co/cKpX3e6ezn

Combination of reasons: proximate and underlying

Russian recruiters: it's okay we don't need you to raid houses or jump out of helicopters or other stuff you were trained for. Just man the trenches and do the job our corrupt, incompetent conventional army won't against a foe determined to expel foreigners.

maybe they just pretended they did https://t.co/6G2CfSUDiY