The American Rescue Plan changed ACA subsidies in March 2021 so that the Essential Health Component (the required benefits) portion of premium for the cheapest and 2nd cheapest silver plan is zero for individuals earning under 150% Federal Poverty Level (FPL) which is just about $20,000 for a single person in 2023.  My research with Coleman Drake, Sih-Ting Cai and Dan Sacks research as well as research by the team led by Dr. Adrianna McIntyre of Harvard have shown that zero premium plans notably reduce administrative frictions and burdens which leads to more months covered.  However the ACA has a dynamic pricing model.  A plan that is zero premium in one year is not guaranteed to be a zero premium plan in the following year.

Dr. McIntyre and colleagues estimated that from 2021 to 2022 that zero premium silver plan turnover was substantial:

I estimated the least expensive and second least expensive silver plans in each county on Healthcare.gov using the 2022 & 2023 Landscape public use file.  I then created a binary variable (Yes/No) if the same plan ID was one of the two cheapest plans in both years for a given county AND if the 2023 version was 100% EHB benefit only as non-EHB benefits like adult vision/dental can not be funded by premium tax credits.

However using the SAHIE U64 138-400% FPL population estimates, the plausibly exposed population is way smaller.  Only about 16% of the plausible Healthcare.gov buyers lived in counties where there was at least one silver plan that was plausibly zero in both years.  This is a small county event. 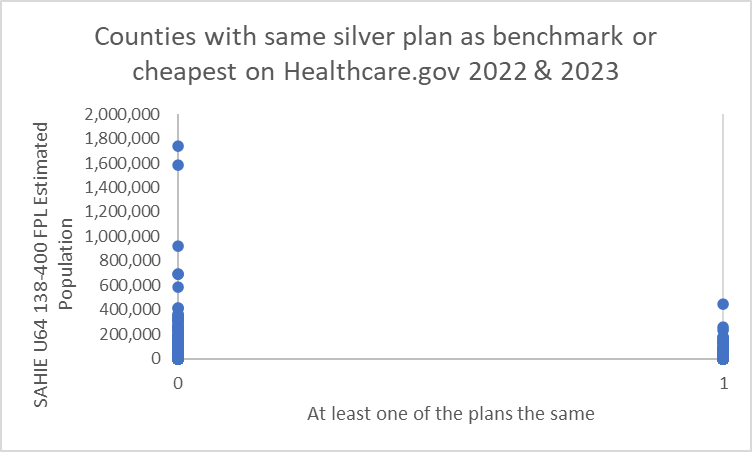 This is quick and dirty. To do this right, I would use the same population estimates as Dr. McIntryre and her team. I would also want to look at the automatic re-enrollment crosswalk as it is plausible that an insurer in County X had the cheapest silver plan in 2022, and the same insurer eliminated that plan in county X in 2023 but crosswalked their enrollment to another zero premium silver plan that they offered.

But this is a call for active choice and smarter defaults to help make the better decision the easy decision to make.

Previous Post: « Thursday Morning Open Thread: Excellent Speech, Subpar Media Response
Next Post: What To Do With the Husks? »