You are here: Home / Open Threads / Saturday Open Thread: Let’s Do This!

down in FL knocking on doors to GOTV.

get off Twitter. make calls. canvass. do what you can to save the future.

we are in the endgame now pic.twitter.com/odoztQgmOp

This election belongs to the young. pic.twitter.com/DCcLNOAa8E

But recent polls show Democratic challenger Adam Frisch is not just within striking distance but has pulled into a statistical dead-heat. That came as a shock to my preconceived notions.

First, Keating Research issued a poll conducted between the end of September and beginning of October that showed Frisch trailing Boebert by only two points, 47% to 45%. That contrasts with the 49% to 42% the same group reported in July.

Given that Keating is a reputable pollster with a “B/C” rating from FiveThirtyEight.com, the poll likely demonstrates real movement in the race. Frisch may be encouraging persuadable voters who do not like Boebert’s brash persona to consider voting for him.

Second, a poll commissioned by Center Street PAC showed Frisch with a 5-point lead, 45% to 40%. Given both the source and the peculiar methodology of the poll, I wouldn’t put much confidence in its results. However, given the paucity of public polling available in the race, it does at least suggest that the Keating poll movement may be real.

But let us not get complacent, because there’s a bad moon rising:

An ominous blood moon lunar eclipse will hang in the sky as ballots are set to be tallied for the Nov. 8, 2022 general election. https://t.co/MCjZzequ8M

For my fellow Buffy fans:

I’ve had a hell of a week that has topped off a hellish 18 months of loss, so I do NOT have the bandwidth for bad news on Tuesday (dragging into whenever votes finish being counted), so I need the Dems to pull this off. Meanwhile, I’m going to resist the urge to crawl under the covers and continue to cook, clean, and generally organize things today to keep myself functional. I suppose the dogs could use a walk, but these days that takes mental strength I’m lacking.

And after finding all this fairly good election news for you, I’m tuning out all social media and news today. I’m sure if some dramatic happens, someone will text me.  😁

Speaking of pups – we got our first snow night before last, and it was cold. And SOMEONE wouldn’t turn the heat up. 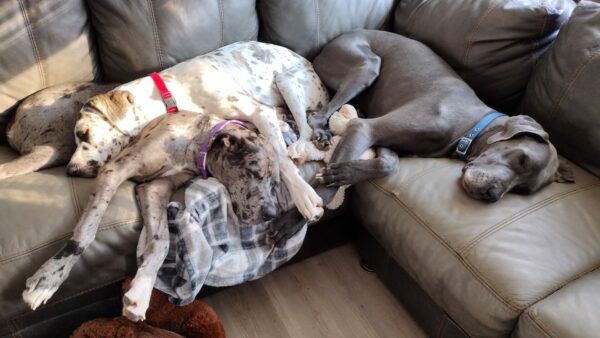 This is an open thread…. (I hope everytime you guys read that you hear James Earl Jones, because that’s what I hear when I type it).