You are here: Home / Anderson On Health Insurance / The uncertainty of waiting for a bill

I have a new early draft working paper in conjunction with Alex Hoagland (University of Toronto) and Ed Zhu (Boston University). This will be presented for the first time at the APPAM conference in two weeks and we need a lot of feedback as we know we are not as tight as it needs to be.

Our question — How do people act in the liminal time from receiving a medical service and actually receiving the bill?

This matters a lot. An increasing number of people get their health insurance through plans that have substantial deductibles. This means people pay a lot out of pocket for their early care. However once they hit their deductible their spot price of future services either goes to co-pay or coinsurance amounts which are much lower than full contracted price or they go to nothing. At that point, the high deductible health plan model predicts people will use a lot more marginal services. The entire HDHP paradigm assumes people are good shoppers for healthcare. Brot-Goldberg et al demonstrate that high deductibles are good at reducing total utilization but people suck at shopping for high value care.

We’re poking at a question within this realm.

We hypothesize that there is a temporal information and belief mismatch.

Most people when they go to the doctor’s office or a hospital for a shoppable service don’t know precisely what they will owe on their deductible until the claim is processed. They have to form a belief about how much they will owe.  This belief could be right.  It could be wrong.  It informs future spending decisions for the patient and their family.  It creates a fuzzy knowledge period between getting a service and getting the bill from their insurer. The fuzziness becomes clear once the bill actually arrives.

We leverage the fact that insurers don’t receive nor pay claims instantly. Instead there is wild variation between insurers, between providers and over the course of a year on the gap between when a service is performed and when a claim is paid. We don’t see the bill’s arrival, we just see the first date when an insurer could send an accurate bill to a patient and their family.

claims and diagnoses don’t come in instantly. Individual providers/hospitals/physician groups do not have a universal timeline to file claims. My kids’ pediatrician files claims within two days and gets paid within ten days of the service. My PCP files claims on the 1st and 15th of the month. My wife has one provider who files weekly. The other provider has a claim from several months ago that has yet to hit payables. 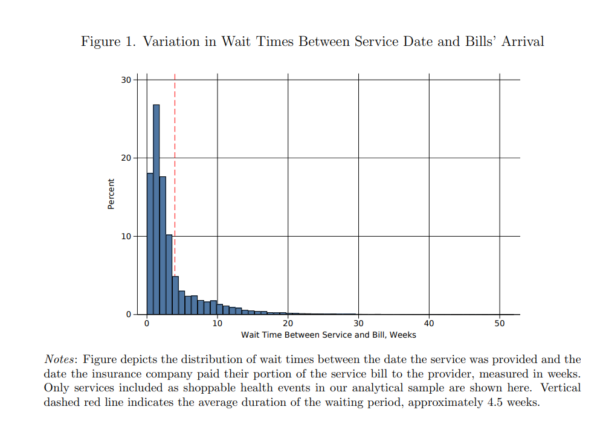 We look at two periods of spending of the rest of the family after a shoppable event.  The first portion is the spending after the service but before the bill.  The second portion is after the bill arrives.  We have three conditions on how people think about what could be in the bill:

Given that health insurance is messy and confusing, I felt a priori that people would get it right would be unlikely. However that is our null hypothesis that there is nothing happening here.

So what did we find? 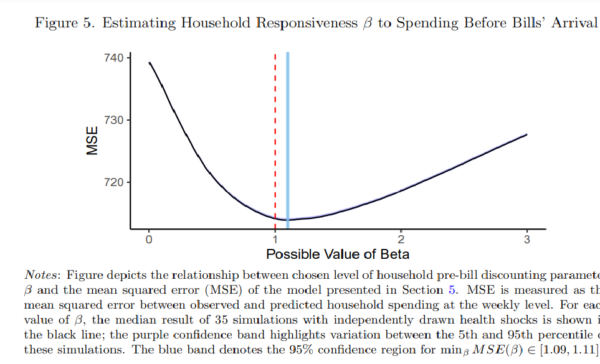 Now why does this matter besides it being cool math combined with insurance geekery?

We expect patients to act as rational consumers.  We have excellent evidence that people don’t “get” deductibles in the way that we expect people to conceptualize deductibles and value of care.  We think that our findings provides a partial explanation as to what is happening here.  There is a quasi-random information gap where people are guessing at what they actually owe and acting on that likely to be wrong information.

We estimate that a fairly decent number of people are exposed to this problem.  We also estimate that this exposed cohort spends significant sums that they likely would not have spent.  Changing the information that people see could plausibly save, for US healthcare expenditure purposes, a small but real number that in any other context is pretty big (We could probably buy at least the NFC South and perhaps parts of the AFC North with the money at stake).  This is a solvable problem.  We have this information problem solved at the pharmacy where almost everything is adjudicated in almost real time.