We’ve had some robust discussions in the comments the last couple of nights about what the Ukrainian Armed Forces is going to do now that they’ve liberated Kherson. I found a very interesting bit of analysis by a senior visiting fellow in the Department of War Studies at Kings College London which we’ll get to after President Zelenskyy’s address.

But before we get to that, just a quick update on the ongoing revolution of the women in Iran. The Guardian has the grim details: (emphasis mine)

Iran has issued a first death sentence over protests that have mounted a fierce challenge to four decades of hardline clerical rule, as rights groups warn that a wave of executions may follow as leaders try to end nearly two months of sustained nationwide dissent.

The execution was ordered for an unidentified person for allegedly setting fire to a government building. It followed 272 of Iran’s 290 lawmakers voting earlier this month to implement the death penalty for serious crimes against the state, and repeated demands by some officials to take a harder line against unrest that shows little sign of abating.

Currently Iran has arrested around 15,000 protestors:

In the last 8 weeks Iran’s regime has killed over 300 protestors, imprisoned nearly 15,000, and threatened to execute hundreds more, yet Iran’s women persist. Today female university students removed their forced hejab and chant, “I am a free woman.” pic.twitter.com/OjQZ6zHfG5

So if they carry through on what they’ve voted to do, this could get very ugly very fast!

On to President Zelenskyy’s address from earlier today. You all know the drill: video below, English transcript after the jump:

Today was a very productive and symbolic day – a day in the Kherson region, in the Mykolaiv region.

First of all, I had the honor of personally presenting our warriors with state awards. In Kherson, I presented 36 orders of Bohdan Khmelnytskyi and “For Courage”, and handed over three more orders to wounded warriors.

In particular, Brigadier General Oleksandr Tarnavskyi was awarded the Order of Bohdan Khmelnytskyi of the 1st degree. In September, he became the commander of the Kherson operational-strategic group of troops, and we can see the result.

The title of Hero of Ukraine was awarded to intelligence officer, sergeant Andriy Orlov. Back in September, he showed extraordinary bravery and effectiveness in battles in the Kherson region. He was wounded and recovered. Returned to the frontline. And already on November 10, as part of a reconnaissance unit, he took part in the liberation of Snihurivka. It was he who raised the Ukrainian flag over the district administration building.

I held several meetings today – both in the Kherson region and in the Mykolaiv region. We will do everything to restore normal living conditions for our people.

This is what the Russian flag means – complete desolation. There is no electricity, no communication, no Internet, no television. The occupiers destroyed everything themselves – on purpose. This is their special operation. On the eve of winter, the Russian occupiers destroyed absolutely all critical infrastructure for the people. Absolutely all important objects in the city and region are mined.

It is happiness for everyone when Russia is driven out. Happiness, which will also be in those cities and communities of ours, which are deprived of a normal life by Russia both after February 24 and in 2014. We will return everything. We will return normal life. And we know that peace for Ukraine is getting closer. For our entire country.

In a few hours, I will talk about this in my address to the participants of the… G19 summit in Indonesia. This is an association of very influential states. And today, on the eve of the summit, influential statements have already been made.

In particular, it is important that the United States and China jointly noted the inadmissibility of any threats to use nuclear weapons. Everyone understands whom these words are addressed to.

Today, we also have decisions from our partners that strengthen Ukraine’s position. I am grateful to Canada for the new package of defense support for our country in the amount of half a billion dollars. And also for new sanctions against Russian accomplices of tyranny – against the cogs of this system.

I am grateful to the United States for the new sanctions. Today, sanctions have been introduced against more than 40 legal entities and individuals who help Russia wage a war. Absolutely everyone who in one way or another works for the Russian army, the defense sector, must receive complete personal isolation from the rest of the world. And then there will be punishment for complicity in terror.

Within the UN, our diplomats worked for a long time with partners to agree on and adopt two very important resolutions. The first of them is supported today – regarding the creation of an international compensation mechanism that will make it possible to compensate all the losses caused by the Russian war, moreover at the expense of Russian assets. The reparations that Russia will have to pay for what it has committed are now part of the international legal reality.

We are still agreeing with our partners on the second resolution – to create a special tribunal for the crime of Russian aggression against Ukraine. We will do everything to make them both work.

Today, a meeting of the Coordination Council of Ukraine for Child Protection and Safety co-chaired by UN Secretary-General António Guterres and Head of the Office Andriy Yermak was held. I thank Mr. Guterres for that.

They discussed how to stop the deportation of Ukrainian children to Russia and return home all those who were forcibly deported. At least these are almost 11 thousand children – we know them by name. But these are only the ones we know about. And in fact, there are more deported.

The meeting was also attended by the ambassadors of the leading states, whom we call on to help with the implementation of this task. We will really need the power of the whole world to bring back all the deportees.

I believe that we can ensure it!

I am grateful to everyone who helps Ukraine!

I am grateful to everyone who fights and works for our country!

Eternal memory to all those who gave their lives for Ukraine and our people.

President Zelenskyy also made a visit to Kherson today.

We will further rule and prosper in our promised land.
We will lay our soul and body for the cherished freedom.#FreedomIsOurReligion pic.twitter.com/FdCNFgCgfS

Thank you @JustinTrudeau & 🇨🇦 people for CAD500 million in defense aid to 🇺🇦. This again proves that 🇺🇦 & 🇨🇦 are true allies who share common values & have the same goals. We’ll always remember the help provided by the fraternal 🇨🇦 in the most difficult times. Together we’ll win!

Here is former NAVDEVGRU Squadron Leader Chuck Pfarrer’s most recent assessments of the situations in Kherson and Bakhmut:

BAKHMUT/1810 UTC 14 NOV/ RU sources report that its recon UAVs were able to locate & direct effective fire on a trio of UKR M113 armored personnel carriers. This action, believed to have taken place on 13 NOV, has had no immediate effect on the lines of contact. UKR lines firm. pic.twitter.com/gaZpNsT0FS

After it was reported that GEN Milley had made statements that during he expects there to be a winter pause or slowdown, which would create an opening for negotiations between Ukraine and Russia, the Biden administration began scrambling to put out self inflicted informational fires. Today GEN Milley had a telephone call with his Ukrainian counterpart GEN Zaluzhnyi. Here is GEN Zaluzhnyi’s readout of that call:

Have informed my 🇺🇸counterpart on the operational picture & urgent needs of #AFU.
Situation on the frontline is stable & controlled. We are tracking attentively the enemy’s activities on the border with belarus & building a reliable shield for the protection of 🇺🇦 in the North.

So what’s up next for Ukraine’s campaign to clear the Russian re-invaders from all occupied Ukrainian territory? I came across this interesting analysis by Mike Martin who is a senior visiting fellow in the Department of War Studies at Kings College London: First tweet followed by screengrabs. A whole lot of screengrabs!

The Ukrainians have taken Kherson. 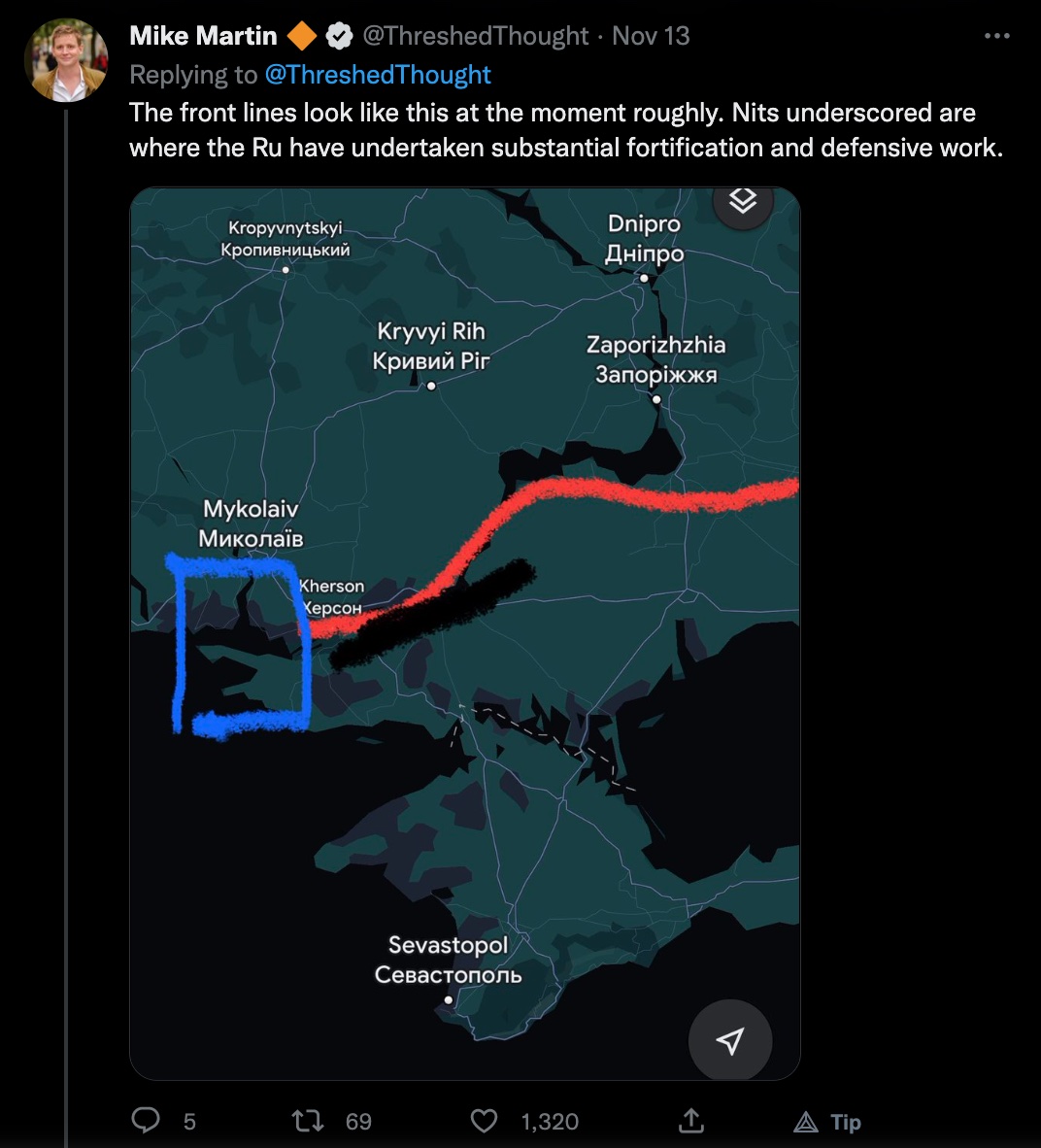 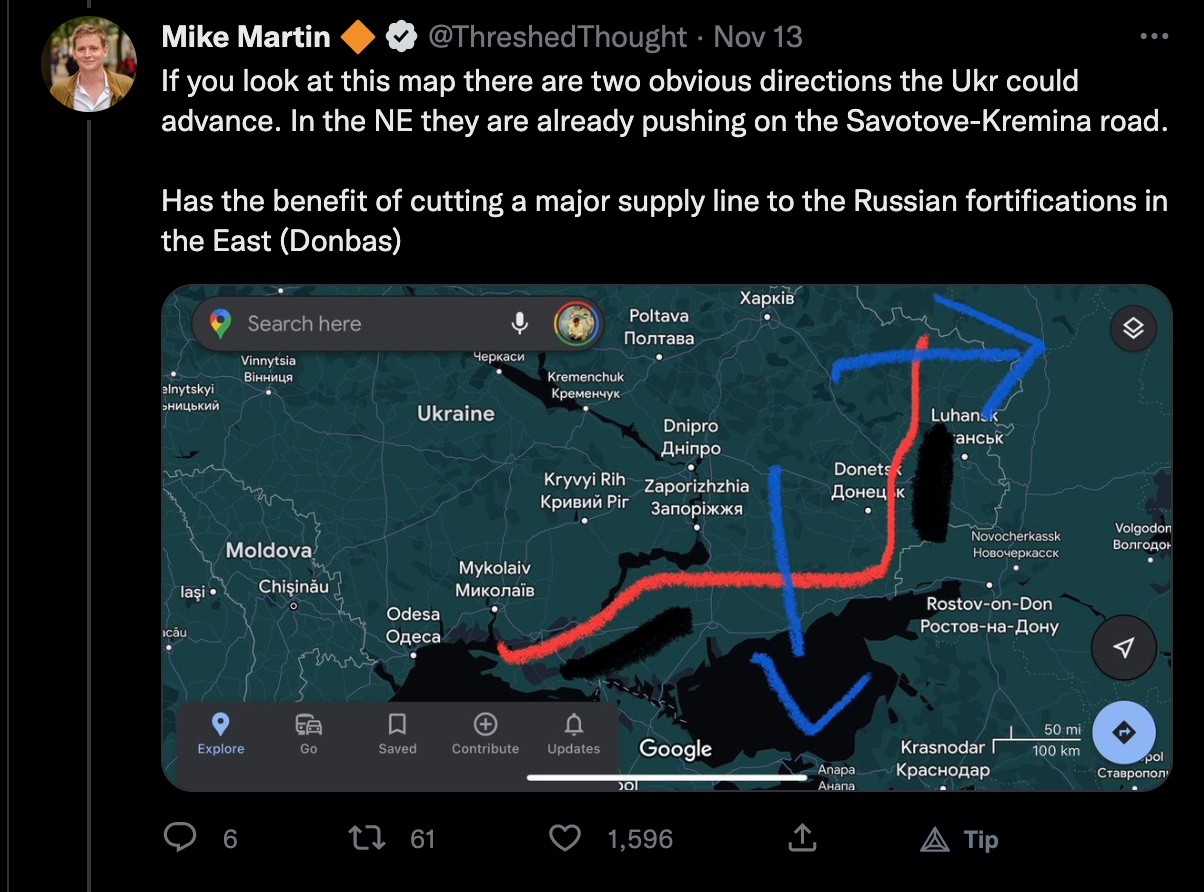 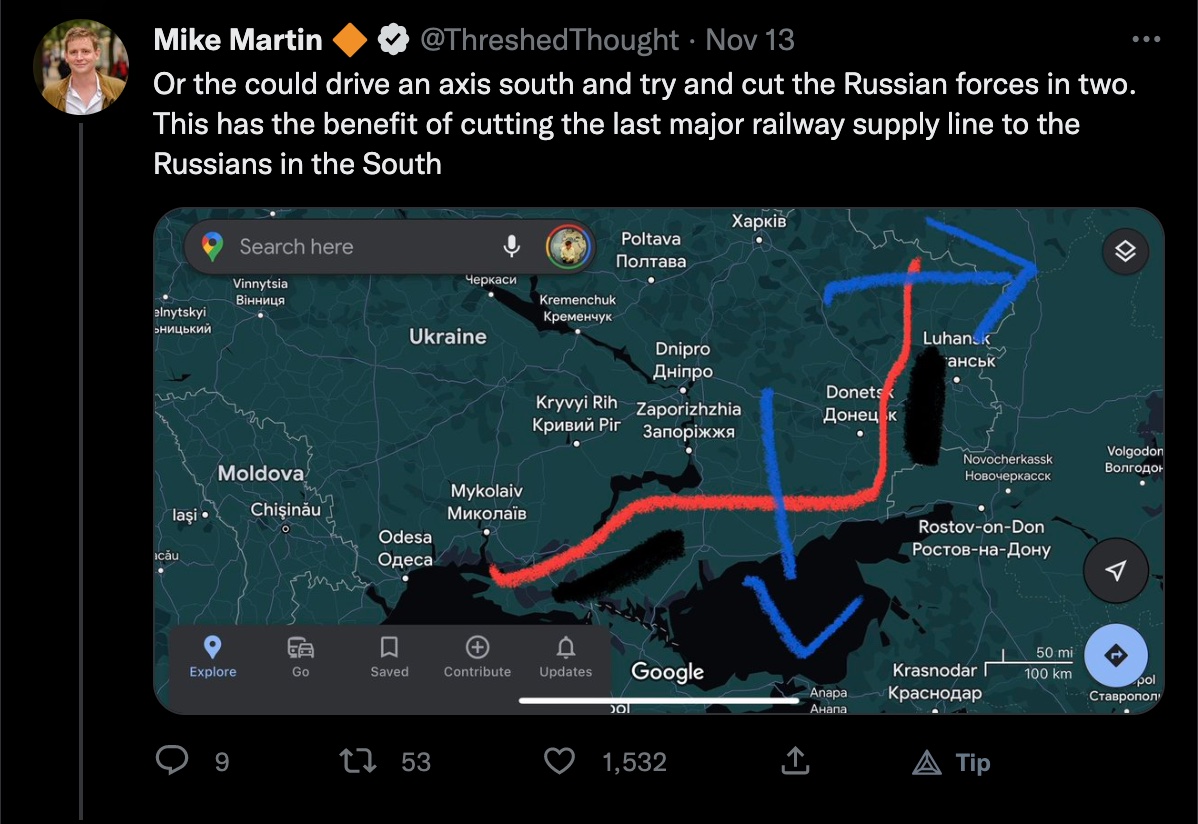 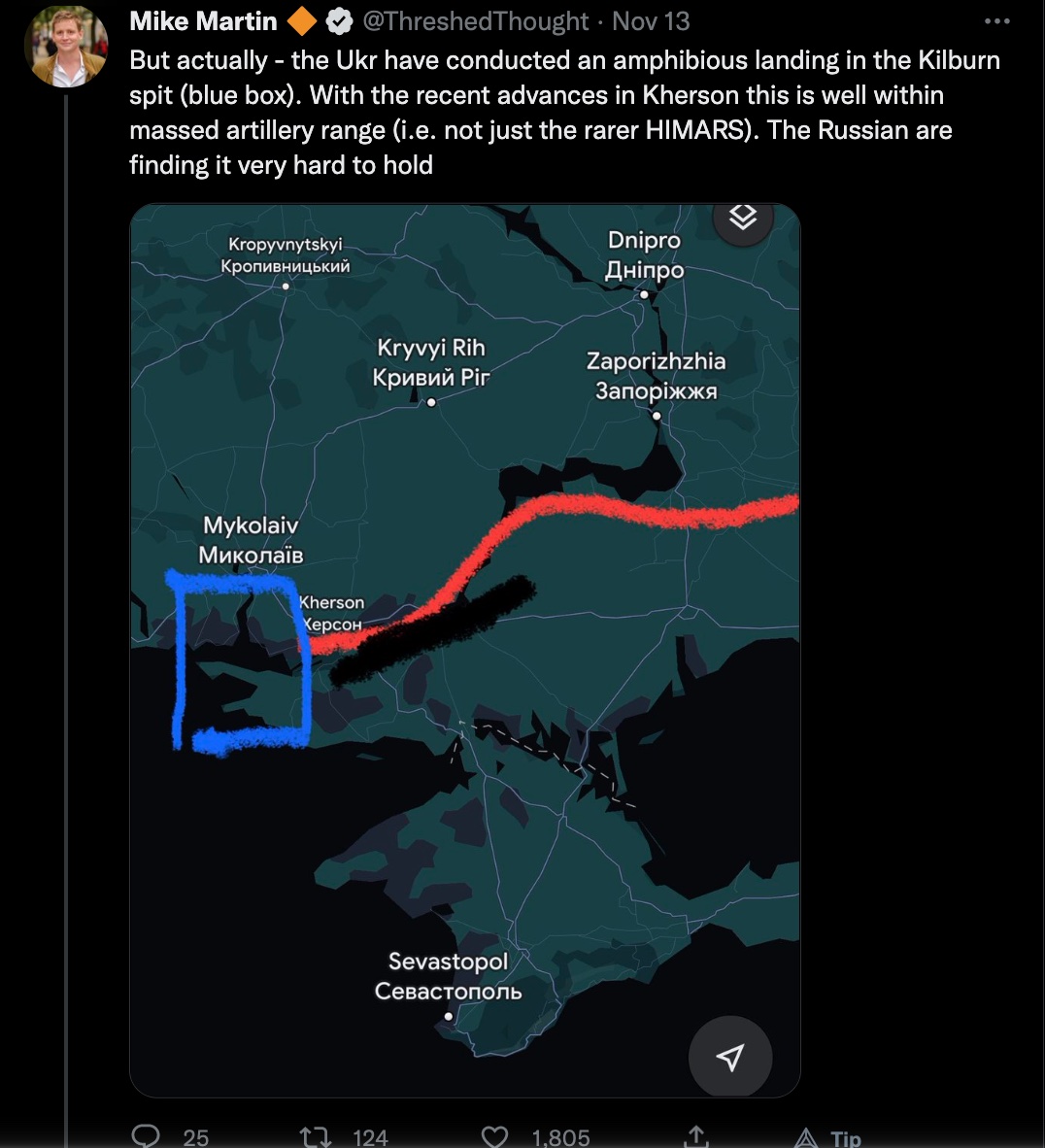 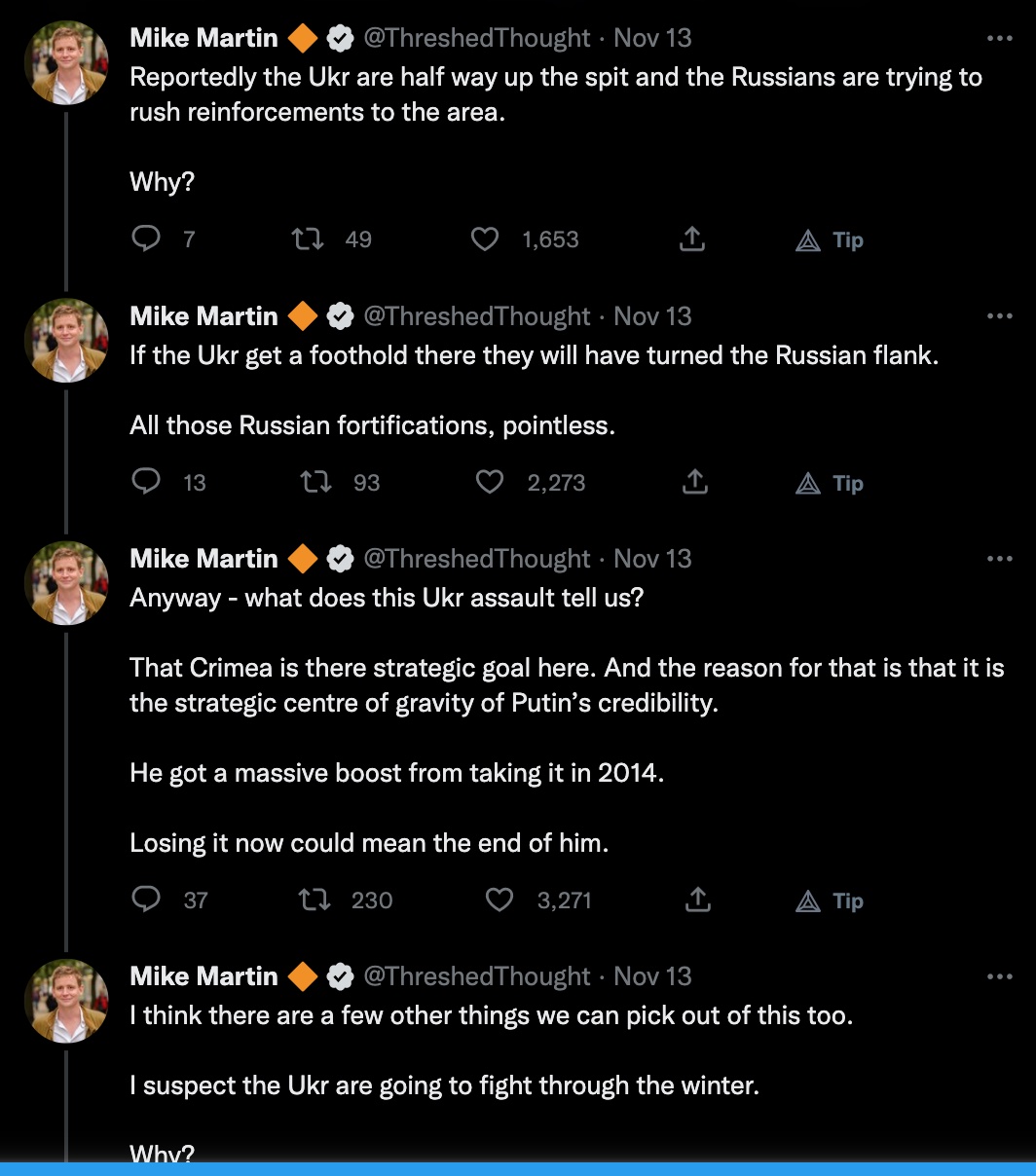 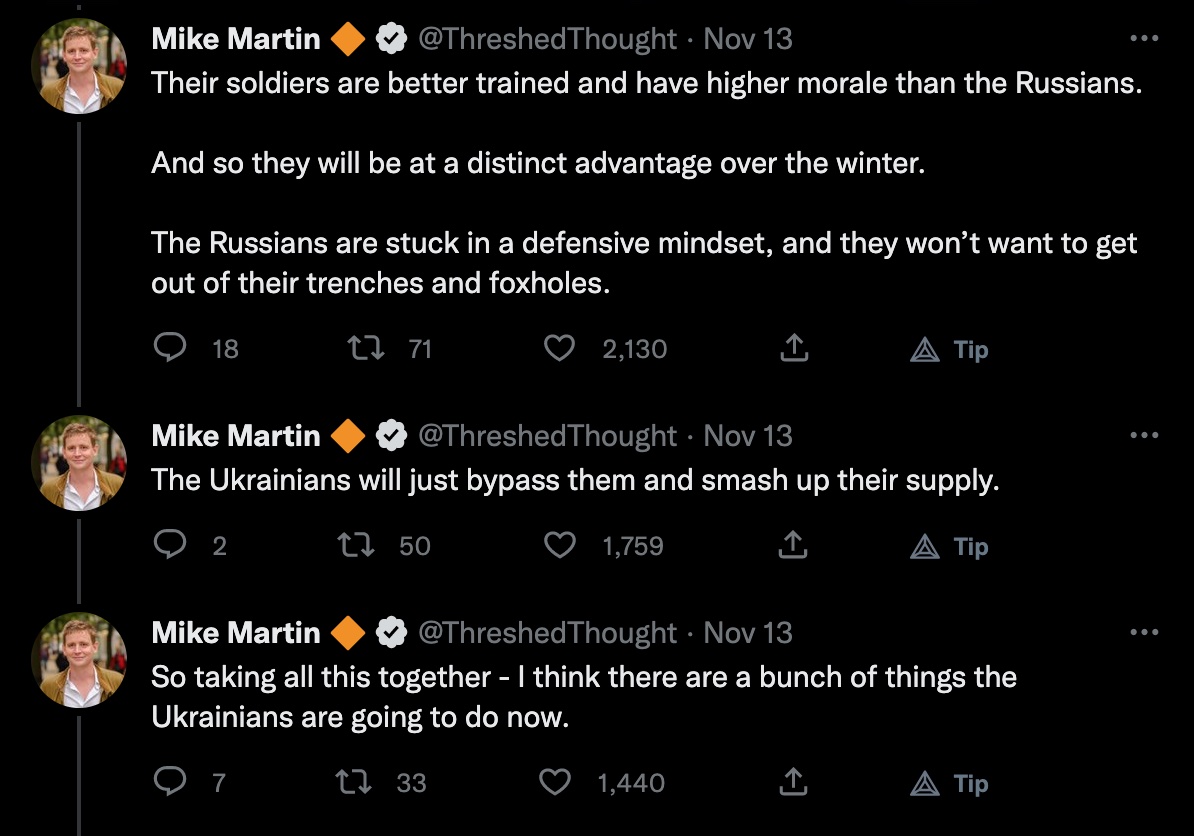 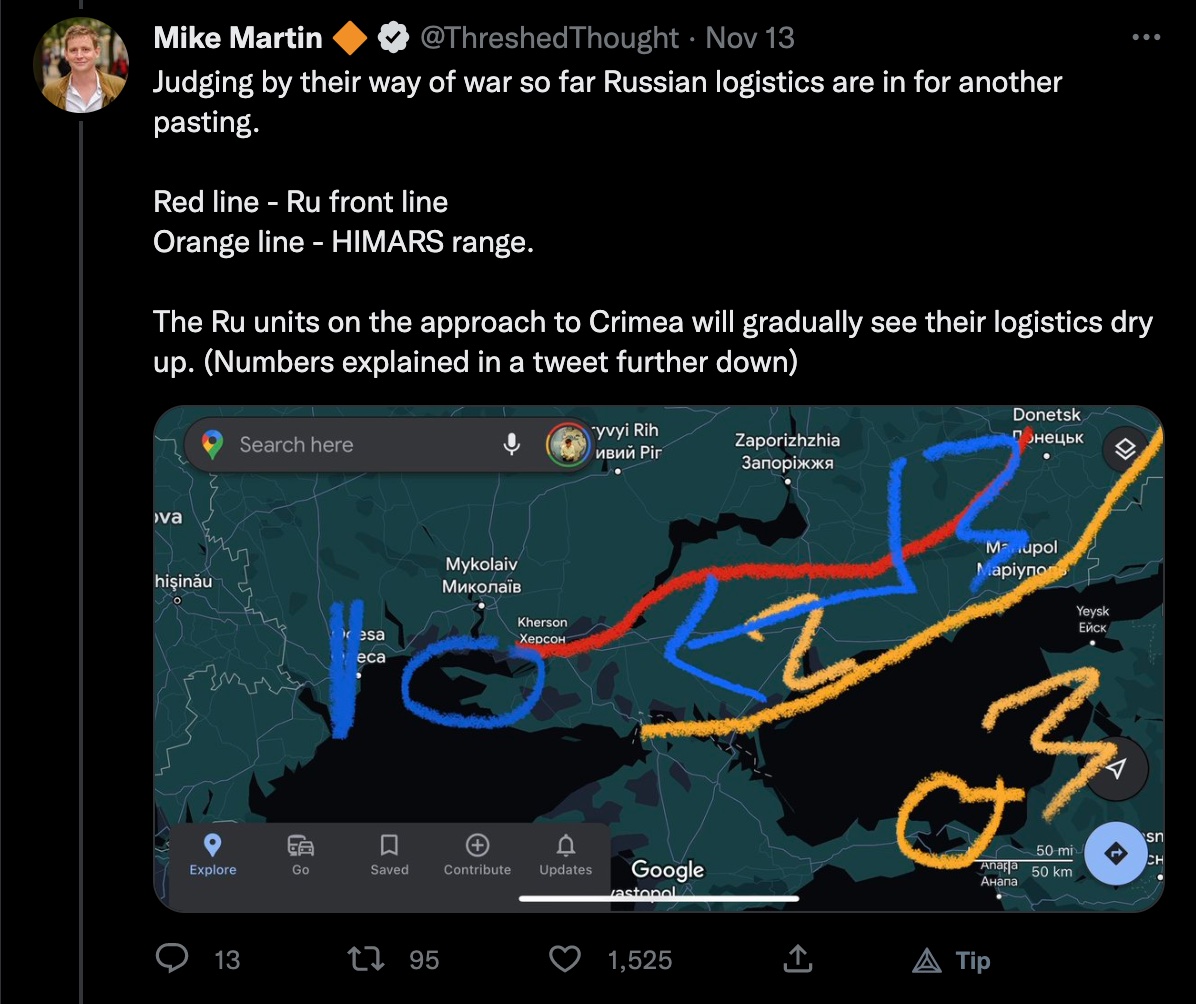 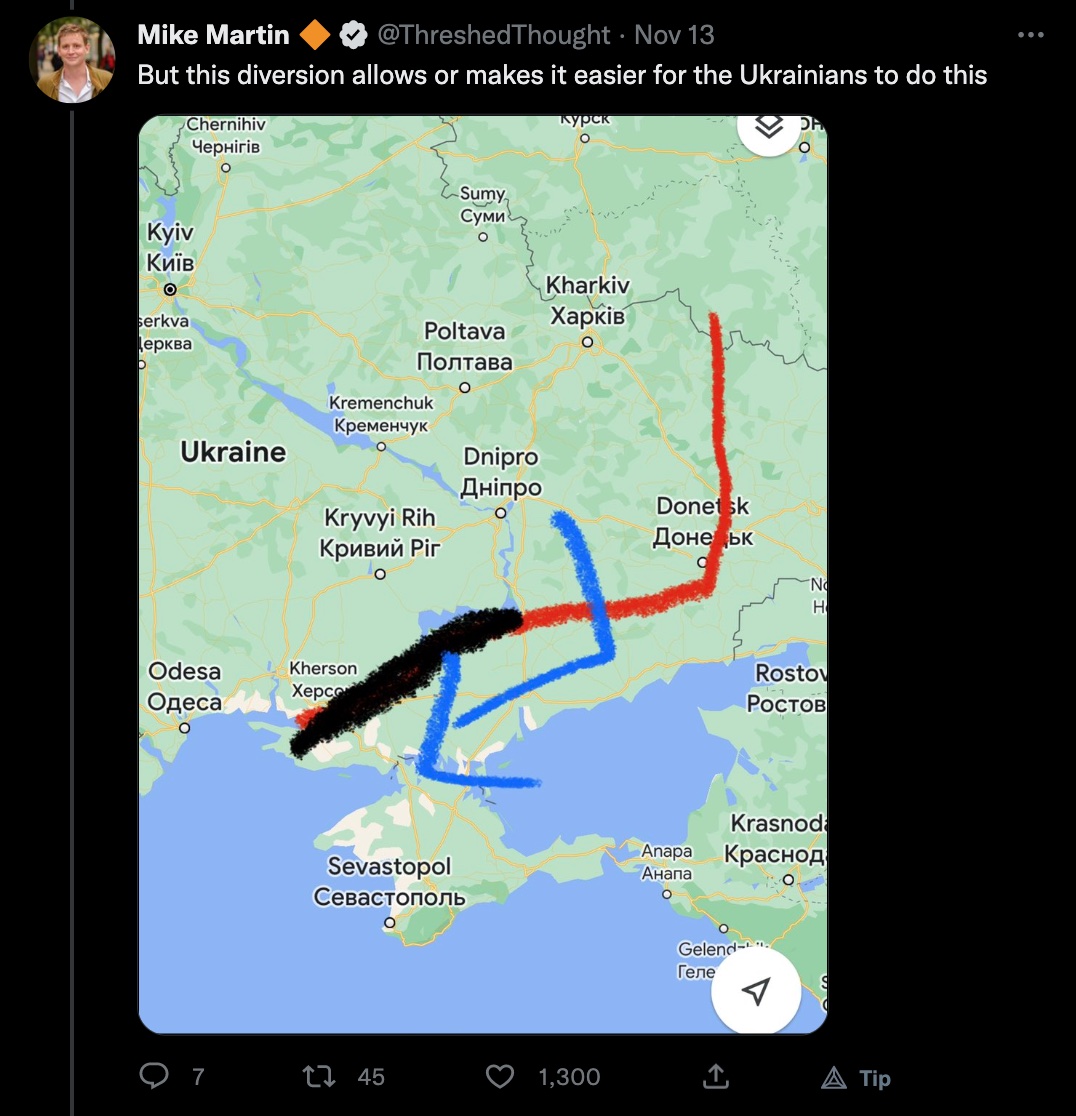 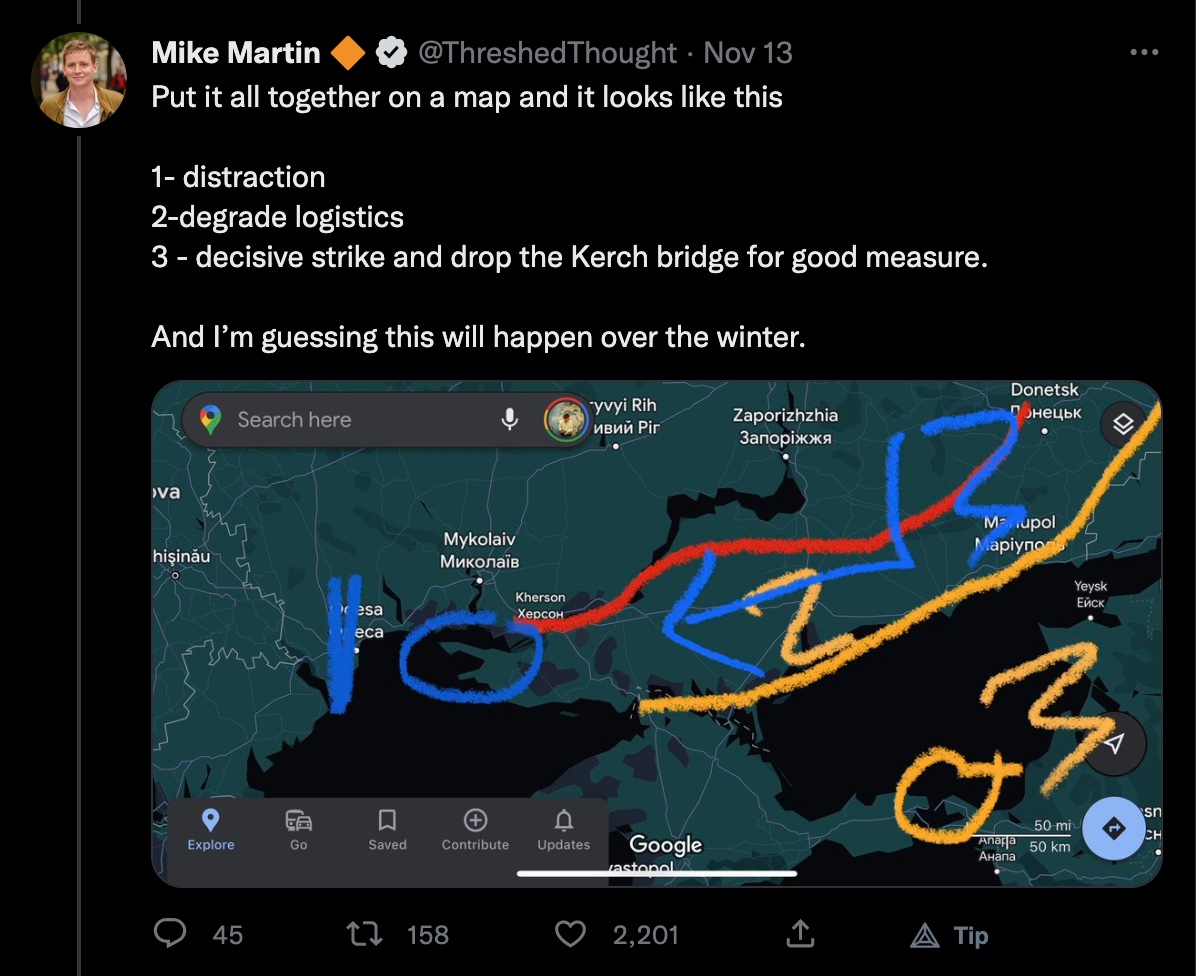 Well ain’t that a shame…

The fire is at the Podolsky Electromechanical Plant, which manufactures components for Russian missiles, all the way from 9K35 Strela-10 at the low end, to S-400s and Topol-M ICBMs! This could end any remaining production capacity.

15 seconds of beauty to make your day! pic.twitter.com/q8WxrIoHNN

Breakfast is the most important meal of the day! pic.twitter.com/hnC8bVHIFg

In Kherson Oblast we are delivering as every town gets liberated non stop! Also in Luhansk, Donetsk,Kharkiv,Mikolai regions,as cities are liberated! But look at the video! The joy+happiness! Kherson! Im so proud that thanks to your support @WCKitchen has reached so many people! pic.twitter.com/9r1cUIstQY

And that’s enough for tonight.

No new tweets, but a new video from his official TikTok: