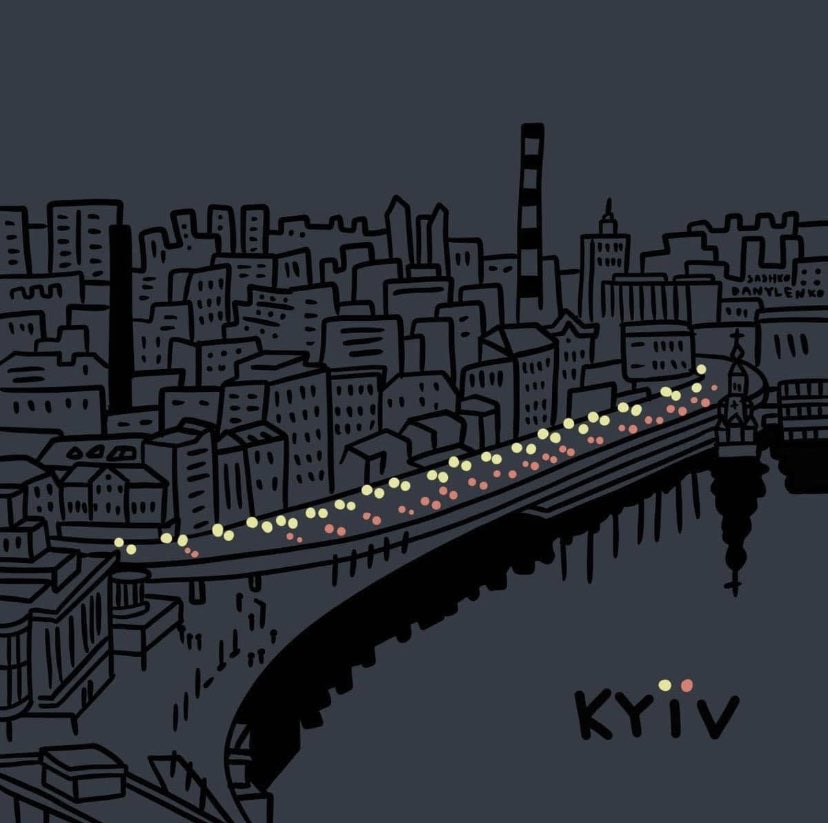 Yesterday was the 9th month to the day of Ukraine’s defense against Russia’s re-invasion.

Tonight it is still dark in many parts of Ukraine.

In case you wanted to see what Kyiv looks like right now pic.twitter.com/MNeLjoms5n

The key task of today, as well as of other days this week, is energy. From Wednesday to today, it was possible to halve the number of people for whom electricity is cut off to stabilize the system.

Most of the problems are currently in the capital of Ukraine, as well as in Kyiv region, Odesa region, Lviv region, Vinnytsia region and Dnipropetrovsk region.

Please, it is necessary to consume electricity sparingly in all regions, as before.

If you don’t have a power outage, it doesn’t mean the problem is over. Please, if you have electricity, this does not mean that you can turn on several powerful electrical appliances at once.

Spiked power draws are recorded every evening, which cause an increase in emergency blackouts. Now, as before, it is necessary to save energy.

Points of Invincibility are deployed throughout the country. But I know that, unfortunately, not in all cities the local government has done a good job. In particular, there are many complaints in Kyiv. In fact, only the Points that are deployed at the base of the State Emergency Service and at the railway station of the capital are normally provided, and other Points still need to be improved, to put it mildly. Please pay attention. Kyiv residents need more protection.

As of this evening, 600,000 subscribers have been disconnected from the grid in the city. Many Kyiv residents were without electricity for more than 20 or even 30 hours. I expect quality work from the mayor’s office. No one will forgive anyone for desecrating the Kyiv Points of Invincibility. Please be more serious. As well as lies in reports of various levels.

I was in Vyshgorod, Kyiv region today, where a Russian missile destroyed an apartment building and damaged the houses of an entire residential neighborhood.

Six people have been killed then, dozens have been injured. My condolences to the families of the victims. We do everything to help and we help.

I visited two Points of Invincibility in Vyshgorod: at the base of the State Emergency Service and at a local school. They are arranged exactly as it should be.

In total, there are now more than 4,000 Points in the country, and it is the responsibility of each local leader to ensure that everything that should be there for people really works.

I spoke today with President of the European Commission Ursula von der Leyen.

I thanked her for the decision to provide a EUR 2.5 billion macro-financial assistance. They approved another EUR 0.5 billion by the end of the year and discussed the preparation of the support package for the next year.

They also agreed on new steps in energy support for Ukraine.

Today, I took part in the international symposium “The idea of Europe” in Lithuania.

I called on the partners to take new steps for the sake of our joint victory and thanked Poland and the Baltic States for their principled stance to cap the price of exported Russian energy.

I believe that the partners’ proposals to introduce a more significant price restriction for Russian oil than was sounded this week are quite valid.

In the evening, I signed another decree awarding our soldiers. Some 216 servicemen of the Armed Forces of Ukraine were given state awards.

I would especially like to mention the fighters of the 71st separate hunting brigade and the 24th Aidar assault battalion for their bravery and effectiveness in destroying the enemy and conducting counter-offensive actions. As well as the border guards of the Lviv and Mohyliv-Podilsky detachments, who are ferocious in defense of the Bakhmut and Avdiyivka directions. Thank you, warriors!

Thank you to everyone who fights for our country! Who is doing everything to suppress the occupiers that are shelling, unfortunately, Kherson, Zaporizhzhia, and our other cities.

Thank you to everyone who works for Ukraine and Ukrainians! To everyone who brings heat, water, electricity and communication back to people.

Glory to our indestructible people!

Glory to all of you – well done!

Here is former NAVDEVGRU Squadron Leader Chuck Pfarrer’s latest assessments of the situations on the Kinburn Peninsula and Izium:

ADDITIONAL INFO: An expanded English translation of the statement by Vitaliy Kim is now available. It clarifies that 3 Kinburn settlements in Mykolaiv Oblast remain to be liberated. FEBA remains approximate.https://t.co/ZhZCuS5kO9

I think this is probably right. I suspect one of the main missions for Ukrainian SOF in the coming months will be to conduct diversionary raids across the left bank to prevent Russia from moving more forces to the Donbas or Zaporizhzhia. https://t.co/eXBuOHBmkN

Kateryna, a UAV operator of the 79th Air Assault Brigade.
Fearless, freedom loving women of Ukraine are on the front line to protect Europe against terrorist regime.
📷 Kate Geraghty pic.twitter.com/GKCzC82pDt

This is going to be a hard winter in Ukraine.
But it will remembered as our finest moment in history, and we will be proud to tell our kids how it was.
Staying together and adapting!

Oh my god, just fucking give Ukraine the Patriot already.
What sort of a divine sign from high above are you even waiting for after 9 months of Russia’s war?
In what order should planets and stars parade so that a political decision could be made?
How many more…

…Russian missile waves should strike Ukraine, taking innocent lives and destroying the country’s vital infrastructure? What high-minded geopolitical concepts prevent you from letting Ukraine end this war — and prove the ultimate effect our your valued contribution?

Right now we’re providing generators, which are most definitely needed.

As Russia works to turn off the lights, @USAIDUkraine is providing 80 generators to help keep the power on. This support is just one part of the U.S. response to Russia's cruel, sustained attack on critical infrastructure as we continue to #StandWithUkraine. pic.twitter.com/h4YgjwuMkV

Yesterday, The Financial Times published an interview with President Zelenskyy. All of it is interesting, but this is the really good part:

The president said the attacks targeting civilian infrastructure showed Moscow had no intention of negotiating an end to the war.

Kyiv has been pushing back at perceived pressure to show its openness to an eventual negotiated solution to the war. Some western partners are concerned that any attempt by Ukraine to take back Crimea — annexed by Russia in 2014 and which it deems crucial for its security — could lead to a dangerous escalation by Moscow, possibly even the use of nuclear weapons.

As Ukrainian forces have made advances against Russian troops in the south and east, Ukraine’s military aims have hardened: it is seeking the return of territory occupied since February and land occupied in the 2014 Russian assault.

Zelenskyy acknowledged that the fate of Crimea was rising on the international agenda.

“I understand that everyone is confused by the situation and what will happen to Crimea. If someone is ready to offer us a way regarding the de-occupation of Crimea by non-military means, I will only be in favour,” said Zelenskyy. “If the solution [does not involve] de-occupation and [Crimea] is part of the Russian Federation, no one should waste their time on this. It’s a waste of time.”

President Zelenskyy, like Illia Ponomarenko in his appeal for Patriot systems, has identified a key issue – that far too many key decision makers who are not Ukrainians, not in Ukraine, and not under direct kinetic attack by Russia* are constantly worried about whether Putin will escalate if Ukraine or the states and alliances supporting Ukraine do something that upsets Putin. Yet the reality that we’ve seen over the past nine months is that whenever Ukraine crosses one of Putin’s self declared red lines in their self defense against Russia’s re-invasion or the US and our allies in providing support to Ukraine that Putin has deemed off limits, Putin does not escalate. He changes course, calls the change of course something other than what it is, such as retreats that are announced as good will gestures, and then continues attacking civilian targets: residential areas, the civilian power grid, the water supply, the food supply, hospitals, schools, etc.

One of, if not THE, key dilemma for the senior leader/decision maker, for the policy maker, and for the strategist is how much risk they are willing to assume. Right now the senior leaders/decision makers, the policy makers, and the strategists in harms way, as well as those closest to harm’s way – all of whom have the most to loose – are willing to assume far, far, far more risk than their counterparts who are safe and sound far away from the battlspace. That senior leaders, who are senior decision makers, and their senior strategy and policy advisors, men and women who sleep soundly in their beds thousands of miles away from where the missiles and rockets and bombs are falling, where the heat and water and electricity is out are more scared than the Ukrainians themselves is really telling. What is even more telling is that the much younger women leading three of the allies supporting Ukraine – Prime Minster Kallas, Prime Minister Marin, and President Sandu – whose states and people are far closer to the line of fire and far more at risk than anyone in DC, are far more steadfast and far less fearful and timid speaks volumes about the need for the American gerentacrocy, and their younger proteges, to end. The club they’ve created, which keeps everyone out that isn’t in the club or isn’t a protege or a protege of a protege, isn’t serving us well.

And if you were wondering, the Kremlin’s response was all too predictable:

Today the Kremlin responded to Zelensky. “Statements such as this once again speak to the Ukrainian side’s lack of preparedness, desire, or ability to be ready to solve the problem through non-military means,” Putin spox Dmitry Peskov told reporters. https://t.co/4WTEXuChCG

And also, we need to break free Adik (the dog from Azov). He was stolen as a “gift” for kadyrov. pic.twitter.com/V2eQhiQzY7

On #WorldChildrensDay #Ukraine’s children's favorite dog @PatronDsns became the first ever @UNICEF Goodwill AmbassaDog. Patron and UNICEF will work together on mine risk education, as well as providing mental health and psychosocial support for children. https://t.co/khp18ocql2 pic.twitter.com/a6IJXcHHfa

More about Patron – in our video pic.twitter.com/KAANOe6uAe

* As I’ve been saying for at least six years, Putin both believes that Russia is at war with the US, the EU, and NATO and that the US leading our EU and NATO, as well as some non EU and non NATO allies, started the war. By and large, Putin has waged his defense against this “aggression” non-kinetically. He has weaponized all elements of national power – Diplomatic, Information, Economic, Financial, Intelligence, and Legal, while limiting the use of Military power to places where his actual or proxy forces can easily prevail, which was a key miscalculation in Kuwait – to wage what he has declared as a defensive world war.