I've not read any of The Dark is Rising sequence, but given that Robert Macfarlane mentions it here in the same breath as Alan Garner and Ursula K Le Guin I am really looking forward to this radio adaptation.https://t.co/wr3GS4SuV5


It’s probably been forty years since I read The Dark Is Rising… I should dig out my copy:

I first read Susan Cooper’s The Dark Is Rising the summer I turned 13, the year the Berlin Wall came down. I read it by torchlight under the bedclothes, not because of parental curfew or power cut, but because that seemed the safest place to read what was, unmistakably, the eeriest novel I’d ever met.

Eeriness is different in kind to horror. Eeriness thrives in edge-of-the-eye glimpses; horror is full-frontal. The eerie lives in the same family of feelings as Freud’s “uncanny”, which in its original German, unheimlich, means “unhomely”. A core power of Cooper’s novel lies in its counterpointing of the homely and the unhomely. It opens in the domestic clamour of the Stanton family house, in a quiet English village in the upper Thames valley. It’s 20 December: the eve of both the winter solstice and the 11th birthday of Will, the youngest of the Stanton children. Inside the house, all is pre-Christmas chaos, baking smells and familiarity. But in the wintry landscape around, something is very wrong. Rooks are behaving strangely, dogs are suddenly afraid of Will, a blizzard is coming, and “a shadowy awareness of evil” is building. Will’s life is about to change for ever – for he will become caught up in an ancient battle between the forces of the Light and those of the Dark, which are always strongest at midwinter. His young shoulders are soon to bear an immense burden.

The Dark Is Rising sank deep into my bones. Its characters – tall Merriman, capable of such warmth and such wrath; the Lady with her leitmotif of haunting, ethereal music; wise young Will; horned Herne – leapt into my imagination, and have never left. I was also deeply influenced by Cooper’s sense of landscape as a memory-shaping, time-slipping medium, present more widely in the tradition of Anglo-American fantasy fiction that runs from John Masefield’s The Box of Delights, through Alan Garner, Ursula K Le Guin’s Earthsea books, Cooper herself and on to Robert Holdstock and Philip Pullman…

Millions of other readers have met Cooper’s work and never forgotten it. Five years ago, with the poet Julia Bird, I co-ran a midwinter Dark Is Rising reading group on Twitter. Thousands of people joined from dozens of countries. #TheDarkIsReading trended nationally on Twitter, and the online outpouring of affection for the book was immense.

This winter, I hope The Dark Is Rising will find new audiences around the world. For, working with the actor, director and theatre-maker Simon McBurney, and supported by Complicité (the theatre company that Simon co-founded) I’ve spent the past year adapting The Dark Is Rising as an audio drama. It will be broadcast first on BBC World Service in 12 episodes, beginning on 20 December, with an episode following each day, such that the broadcasts correspond to the “real time” of the novel’s own unfolding across the solstice, Christmas and New Year’s Eve…

Don’t you just hate when that happens?!? 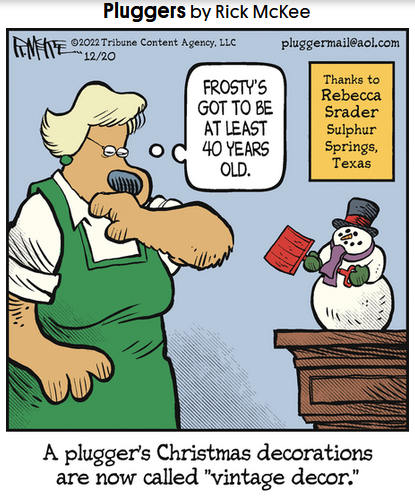 I am once again asking for the Hallmark Christmas movie where the high-powered lawyer who moved to the big city sees that her ex boyfriend from her small town is now on trial for being at the Capitol and her mom is completely redpilled sharing QAnon memes on Facebook.

Deterrence is most likely to be successful when a prospective attacker believes that the probability of success is low and the costs of attack are high. pic.twitter.com/T75MYcPkDq