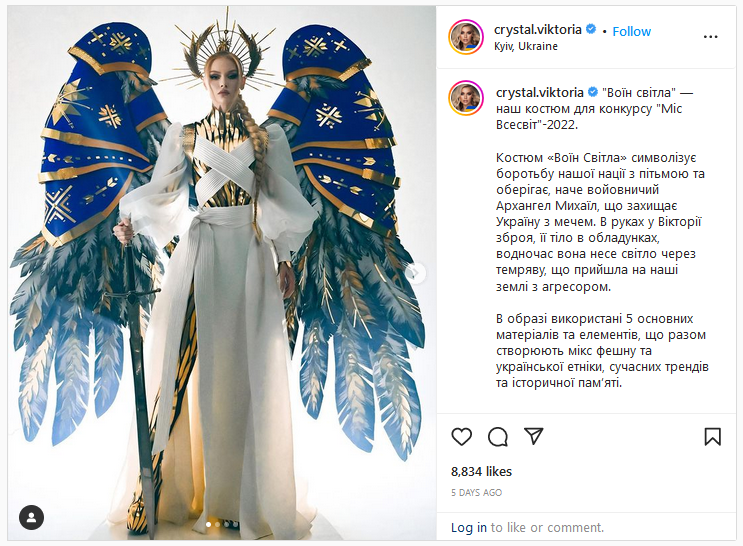 Ukraine continues to spread its national spirit by participating in global events like Miss Universe, the World Cup Qualifiers, Eurovision, and more. For the Miss Universe 2022 competition, Ukraine has decided to send its vice Miss Ukraine Universe 2021, Victoria Apanasenko, to showcase the strength that characterizes the Ukrainian people. One of the moments already gaining attention is Apanasenko’s choice for the national costume portion of the competition. Without a doubt, Apanasenko’s national costume is an ode to the current struggle facing her country today…

In a message to The Odessa Journal, the designer and creator behind the costume, Lesya Patoka, explains, “It was very important for us to create the image of not just a beautiful, but also a strong-willed girl who personifies the whole of Ukraine — unbending, courageous, free. Despite all the difficulties and challenges, we coped with creating the image on time, because each of us is a Warrior in his business.” The idea of this costume is to portray Apanesko as a warrior leading her people with bravery and humanity, something we have seen Ukrainian officials reiterate time and time again. No matter where Apanaesko lands in the competition, there’s no doubt that her national costume will be remembered for years to come

Meanwhile, Putin: Where my Nazgul at?…

Ukrainians have been telling they are fighting with Mordor and calling russian soldiers orks and now the accuracy has been confirmed by putin himself https://t.co/UGq3Fl6GzP

Some people in Ukraine celebrate #Christmas today. Some decided not to celebrate. But we have a choice. And we should remember whom we should thank for this choice.#ThanksToZSU pic.twitter.com/GFVvYvLrkx

I bought a Russian advent calendar. Every time you open a window an oligarch falls out.

Windows of all Russian buildings are insulated with cotton and sticky tape for the entirety of Russian winter (September through April) and cannot be opened without a concerted effort of at least 3 burly men or a single determined grandma.
So, make your own conclusions. https://t.co/qhmcA5VISU

Day 307 of my 3 day war. I played my gas card so early Europe stocked up for winter and I mobilized so late that my conscripts will freeze in it.

I remain a master strategist.

Both American guests of honor in this 2015 photo taken at the 10th anniversary celebration for Russian state media network RT are, in 2022, publicly advocating for the U.S. to leave Ukraine to the mercy of Russian aggression.
Funny how that works out. https://t.co/4OJvVl1Fb6 pic.twitter.com/IKZkPC9j6b

I’m convinced the prewar intelligence gathering & reporting was fatally compromised by the assumption that Russia wouldn’t dare do something so catastrophically risky. The country that recently did a catastrophic invasion was the only one that believed another country would https://t.co/RqF01wvTNg

Zelensky, in his New Year address today, has said that there will be no forgiveness to those who have started and supported this war.
I don’t idolize politicians and don’t blindly follow their lead. But this is a recommendation I will absolutely adhere to. No forgiveness. Ever.