Folks, get your updated COVID vaccine.https://t.co/l9SnrQeUu1.

As always, the (mostly red) Transmission map gives a measure of how likely you are to get sick if you don’t take precautions (currently: very). The Levels map is about covid hospitalizations (currently: increasing). It doesn’t indicate hospital crowding, just covid admissions. https://t.co/PpWVSNSOXd 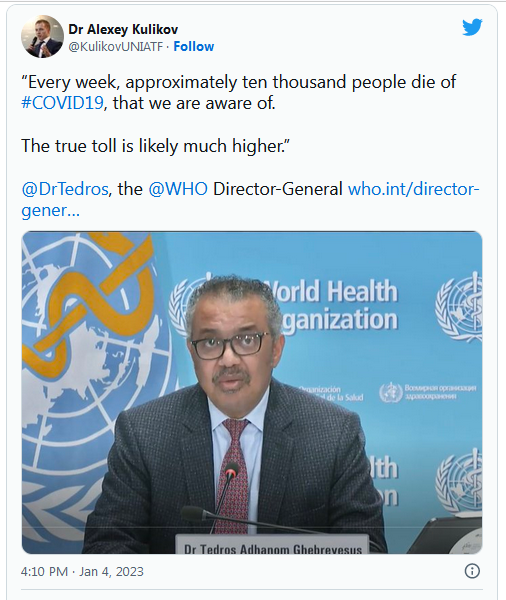 As hospitals in China overflow with COVID patients, a University of Hong Kong epidemiologist warns of the possibility of ‘a million deaths or more this winter’ https://t.co/RqNOwNQ4UJ pic.twitter.com/lfkHKK1s9x

EXPLAINER: As COVID-19 rips through China, other countries and the World Health Organization are calling on its government to share more comprehensive data. Some even say many of the numbers it's reporting are meaningless. https://t.co/oxqXKSi5pX 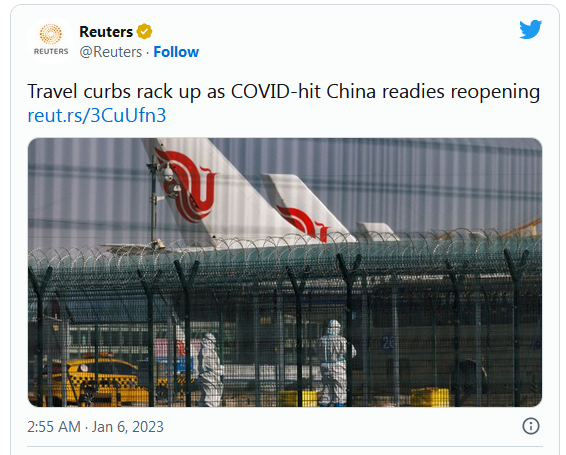 Beijing says Zero-Covid reversal was the right move at the right time. In reality, the abrupt U-turn–a result of a policymaking process driven by one person–has thrust China into a new public-health emergency. with @JChengWSJ @WSJ China team
https://t.co/a2Ep0RxE4q via @WSJ 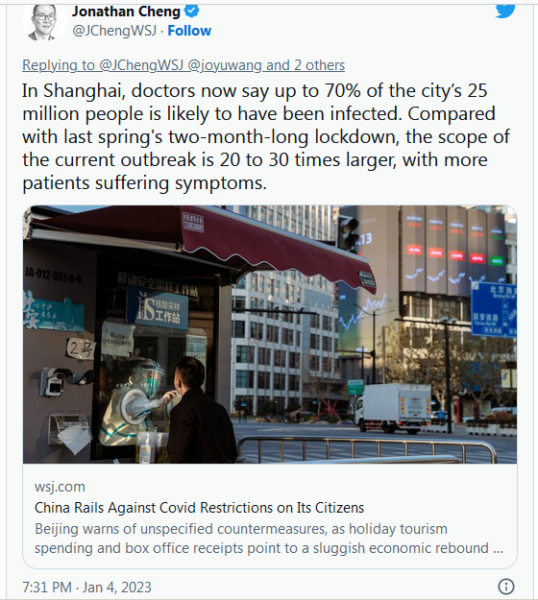 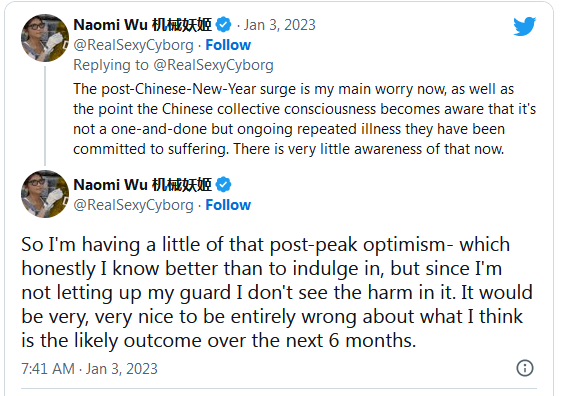 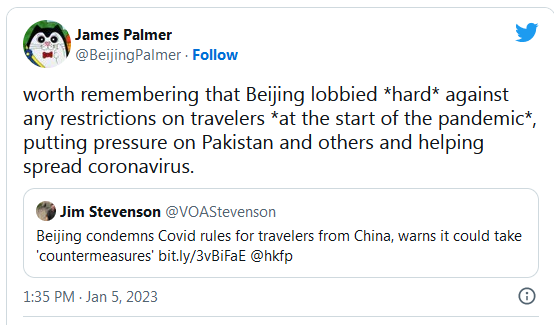 The people at the front end are too overstretched for security theatre: 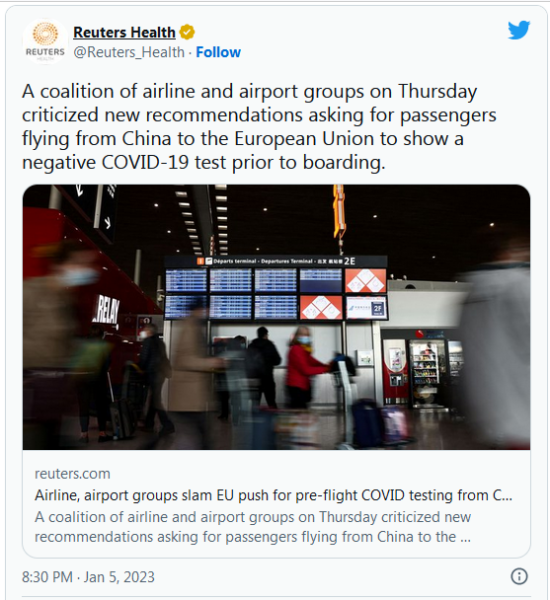 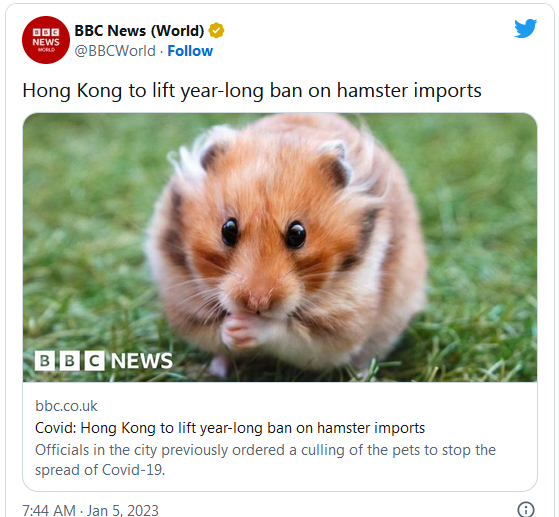 Taiwan has again offered to provide China with assistance to help it deal with a surge in COVID-19 cases but Chinese authorities have not yet responded, official Taiwan media reported late on Thursday. https://t.co/YQcjN55DeP 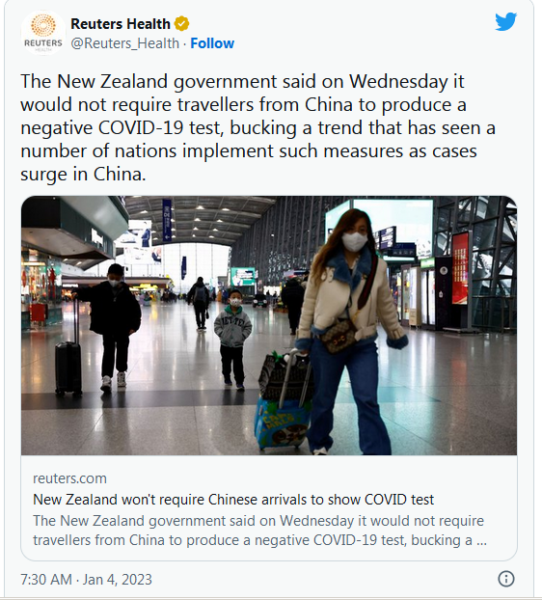 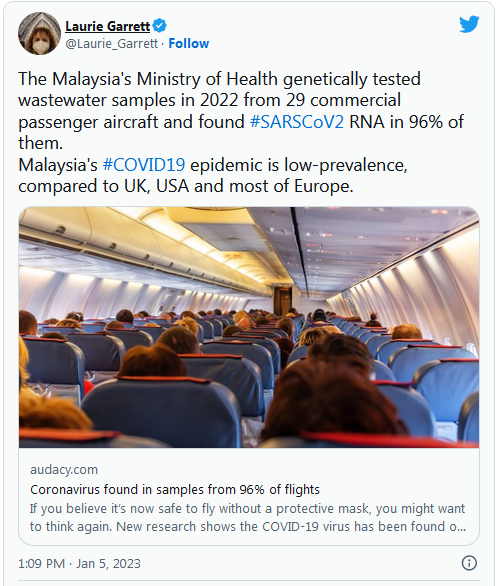 A hopeful turning point for Japan after having gone through its worst wave for fatalities pic.twitter.com/ifrPlXXEdc

In the Philippines, the sight of rows of air purifiers at the grocery store and UV-C disinfection in restaurants + cafes tells me that even in this country it's recognized that #COVIDisAirborne.

I am proud to say that this is my country of birth! 🇵🇭#CovidIsNotOver #covid19bc pic.twitter.com/4ZS9Ak2ydN

ONS deaths data has been released for week ending 23 Dec.

The Omicron subvariant, XBB.1.5, is causing concern among scientists after its rapid spread in the United States in December. https://t.co/HDioaTViWp 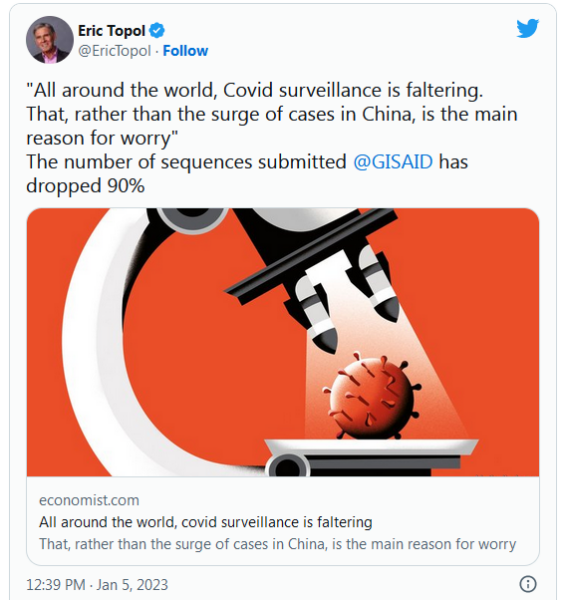 Why hasn't Paxlovid implementation lived up to its expectations?
Prescribed for only 13% in the US & 0.5% in the UK despite it working well against all variants to date, including XBB.1.5 [we've shown rebound is ~10% via systematic assessment]https://t.co/UEODG36Aza @maxdkozlov 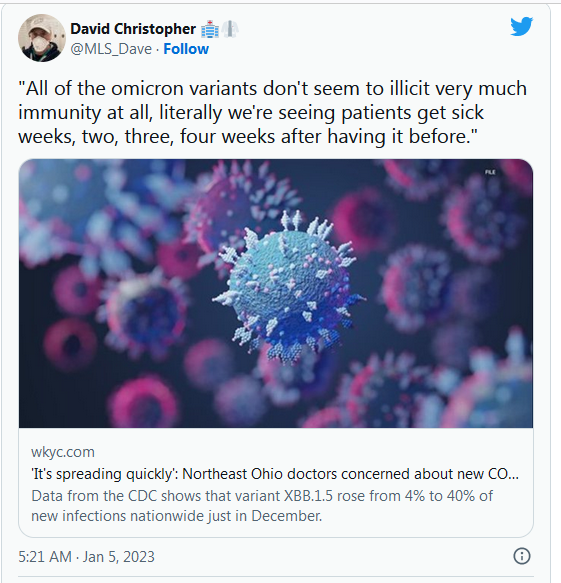 I’d forgotten about the Super Bowl… 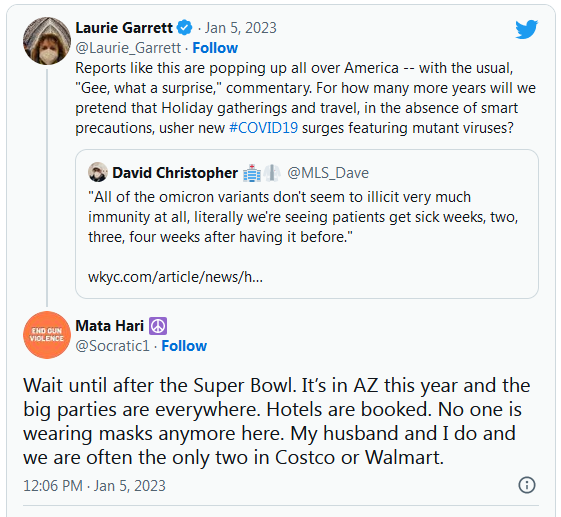 … While rare and potentially dangerous cases of heart inflammation have been associated with some Covid vaccines, these real cases have been muddled together with unrelated illnesses and misinterpreted, sometimes cherry-picked data.

Combined with a wave of anti-vaccine activity online throughout the pandemic, it has given birth to a group of activists who ascribe nearly any tragic or unexplained death to vaccines.

The loudest voices in the anti-vaccination lobby have followed this pattern throughout the pandemic, even though heart problems are a symptom of Covid itself…

Research by the Center for Countering Digital Hate (CCDH), a non-profit campaign group based in London and Washington, found that mentions of an anti-vaccine film quadrupled after the player’s collapse.

The day after the match the documentary Died Suddenly, which was released in November last year, was mentioned nearly 17,000 times, the CCDH says. The BBC previously looked into the claims in the film and found little or no evidence behind many of them.

Caroline Orr Bueno, a researcher on misinformation who has spent a decade looking at the anti-vaccination movement, says the film gave rise to communities of people across several social media platforms primed to hunt for news events to back up their views.

“They believe the anti-vaccine rhetoric that they are seeing,” she says, “and they are joining in out of genuine concern without necessarily knowing that they’re being misled.” …

While it might seem unusual for young, healthy people to experience heart problems, there are important differences between a heart attack and cardiac arrest.

Most heart attacks are caused by blockages in arteries and are associated with older people as well as lifestyle factors like smoking and diet.

Most cardiac arrests are caused by a problem with the heart’s electrical system which keeps it pumping. These heart rhythm malfunctions are often genetically inherited and can be seen in young people who appear otherwise healthy.

A 2018 study by the Football [Soccer] Association looked back over 20 years of data from screening more than 11,000 players and found not only were cardiac deaths more common than previously thought – although still rare – but that most of them were in people with no previously diagnosed heart problem.

One of the first clear examples of anti-vaccination activists taking advantage of a high-profile news event was the televised collapse of Danish football star Christian Eriksen during the European football championships in June 2021.

Only after the initial wave of speculation and misinformation was it revealed by the director of Eriksen’s club at the time, Inter Milan, that the midfielder had not received a Covid-19 vaccine prior to his collapse.

In November, Twitter stopped enforcing its Covid misinformation policy, a development that Imran Ahmed of the CCDH called “particularly worrying”.

“Anti-vax lies are deadly and platforms must stop allowing dedicated spreaders of disinformation from abusing their platforms and the trust of other users.”…