Buffalo Bills safety Damar Hamlin is partnering with a nonprofit to manage the $8.6 million that has been donated to a two-year-old GoFundMe since he was injured last week. The funds will support young people through education and sport.https://t.co/b44ixYnrYq pic.twitter.com/EUnRQ4iGZF


To start your morning, a story that doesn’t suck:

Buffalo Bills safety Damar Hamlin plans to support young people through education and sports with the $8.6 million in GoFundMe donations that unexpectedly poured into his toy drive fundraiser after he suffered a cardiac arrest in the middle of a game last week.

He will also use proceeds from the sale of new T-shirts, emblazoned with “Did We Win?” along with his hands in the shape of a heart, to raise money for the trauma center in Cincinnati that treated him. Hamlin, who live-tweeted through his team’s victory over New England on Sunday, tweeted Tuesday that he has returned to Buffalo but is still in the hospital being evaluated.

The 24-year-old has teamed with The Giving Back Fund, a nonprofit that helps athletes and celebrities manage their charitable giving, to host the “The Chasing M’s Foundation” Charitable Fund. GoFundMe representatives told The Associated Press the crowdfunding platform will soon transfer the donations that have come in since Hamlin’s injury Jan. 2 to the new fund. Chasing M’s is Hamlin’s apparel company…

At the opposite end of the spectrum, Kevin McCarthy’s Republican Q-Caucus…

my general prediction is that the republican house is going to spend two years writing ads for every democrat in america https://t.co/GUD94GjjY4

*most* people in this country do not live in the fox cinematic extended universe and have no desire to do so, but the republican house have every intention to suck all of us into it regardless of what we want

Yeah, it's been clear for some time the "swamp" refers to non-political agency staff who want to do things like enforce labor and civil rights laws and rules about when you can or cannot kill wolves or having to pay rent to graze cattle. https://t.co/I56sdHrzYM

Of course, the Senate & the WH remain in the hands of Democrats. This could make the House GOP even more prone to performative nuttery, because most members know… indulging the fringe is unlikely to have real-world legislative consequences. @RadioFreeTom https://t.co/OSXdL5ZA0U

Tom Nichols never intends to go back to the Republican Party:

… There are some on the center-right who are hoping that the GOP has learned its lesson, and will restrain its fringe and finally leave Donald Trump behind. Ross Douthat, for one, wrote over the weekend—in a column that was hopeful to the point of fantasy—that the fight over the House speakership was “the old world come again,” a return to “the G.O.P. ancien regime with all its dysfunctions, stalemates and futility,” and that Trump, although “hardly finished,” has lost much of his grip on the party.

Good luck with all of that. A more authoritative voice, the new House Majority Leader Steve Scalise, also had a few things to say. The new House Republican majority, he tweeted on Sunday afternoon, would move in its first week to pass legislation to defund “the 87,000 new IRS agents,” establish a committee on the “weaponization of the federal government against citizens,” end Strategic Petroleum Reserve oil sales to China, and, in a nice flourish, hold “woke prosecutors accountable.”

The new House Judiciary chair, Jim Jordan, will lead the committee on “weaponization,” virtually guaranteeing that its hearings will turn into a festival of prancing nonsense that is unlikely to do very much but enhance Jordan’s visibility while he tears into U.S. intelligence and law-enforcement agencies at the expense of American national security. (Jordan has also dropped unsubtle hints that he intends to impeach Joe Biden.)…

Of course, the Senate and the White House remain in the hands of Democrats. This fact could make the House GOP even more prone to performative nuttery, because most members know that most of the time, indulging the fringe is unlikely to have real-world legislative consequences. If Biden continues true to his political form, he’ll likely ignore most of what goes on in the House. Biden is 80 years old; his political career spans a half century of American history, and the antics of the extremists will probably remain in his peripheral vision, if he notices them at all. (The exception here is Jordan, who has made noise about going after Biden’s son Hunter. But even if those hearings take place, they are unlikely to have any major impact on policy over the next few years.)

The good news is that most of the U.S. government remains in the hands of functional adults. The bad news is that the House is headed down the rabbit hole to its own Wonderland, where things will become “curiouser and curiouser,” and its members will have to placate their extremists by believing “six impossible things before breakfast” every day. 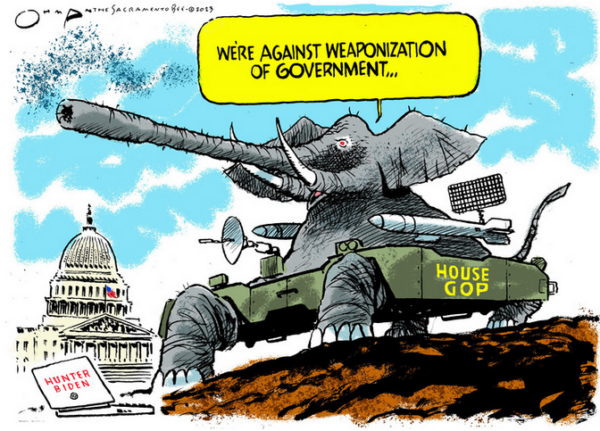