In October, I went back to Paris to visit my daughter and son-in-law. While working on her Ph.D. in French literature, my daughter spent several summers and a few semesters in Paris. She met and married a terrific young Frenchman and they now live in the17th arrondissement, north of the world-famous attractions along the Seine.

For this visit, she and I decided to spend the weekend in Lyon, France’s second-largest metro area, some 245 miles southeast of Paris. Lyon was established by the Romans in 43 BC, where the Rhône and Saône rivers meet. The city became the capital of the Gauls during the Roman Empire. Today Lyon is a UNESCO World Heritage site and the gastronomic capital of France. And while the city was a world center for the production of silk, it’s also the home of the Lumière brothers, inventors of the modern cinemascope.

We spent most of our two days in Vieux Lyon, the city’s oldest section, located in the Fourvière district, across the Saôme. At the time we were there, 1 US dollar was about equal to 1 euro, which made shopping, eating, etc., a very good deal.

On Sunday, after an amazing outdoor brunch, we went In search of the huge church high on the hill, looking down on Lyon. Getting up there was another story. 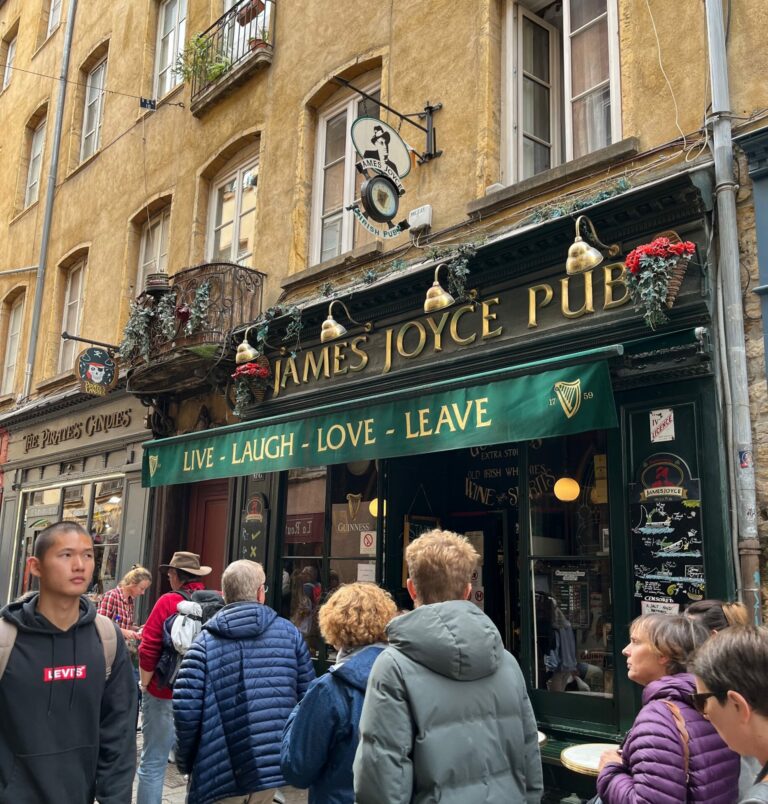 Joyce would have definitely approved of the pub’s motto! 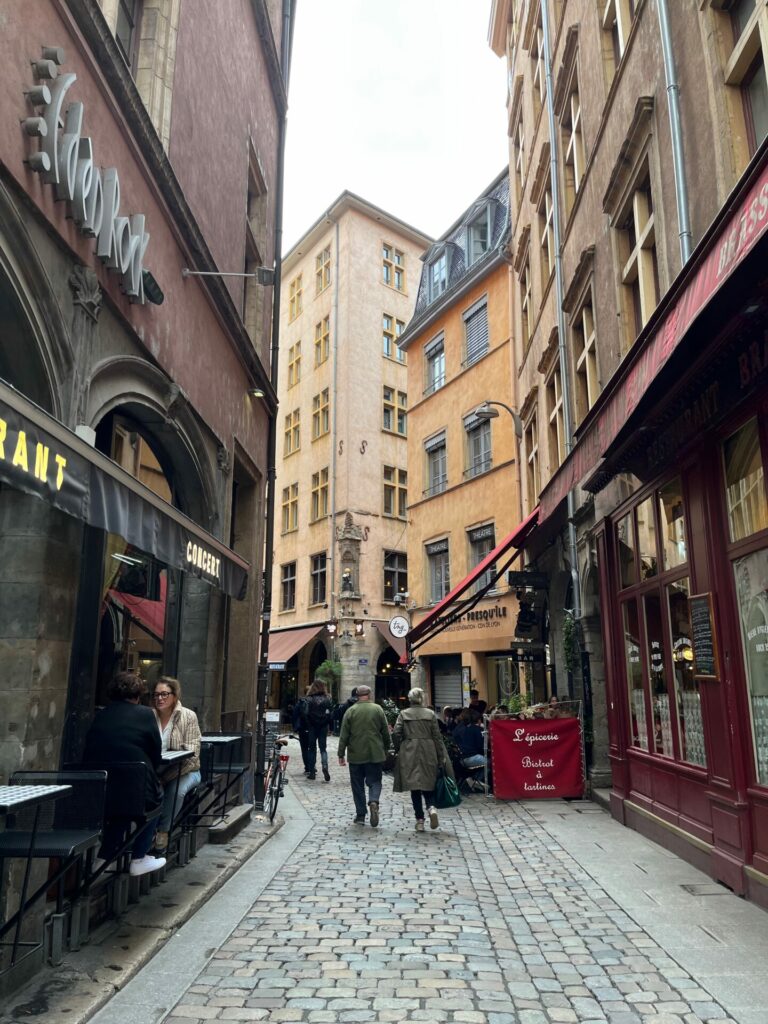 A typical street in Vieux Lyon, the oldest part of the city. 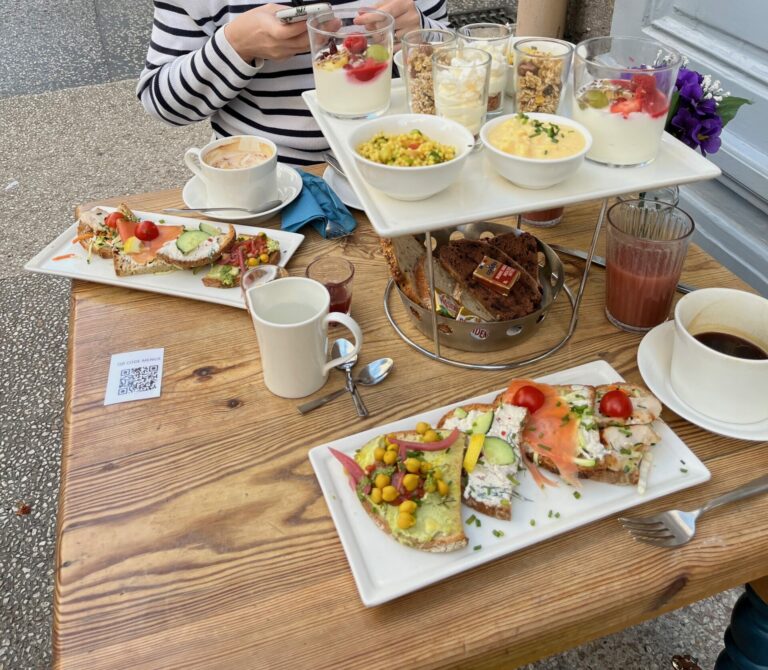 We started Sunday with brunch, and since it was only in the low 50s, the restaurant provided blankets on each chair for the outdoor diners. Brunch included yogurt and fruit, granola, 4 half sandwiches, couscous and another creamy veggie dish, several kinds of bread, mousse with crème Fraiche, and brioche aux praline, along with lots of great French coffee and a fruit smoothie. 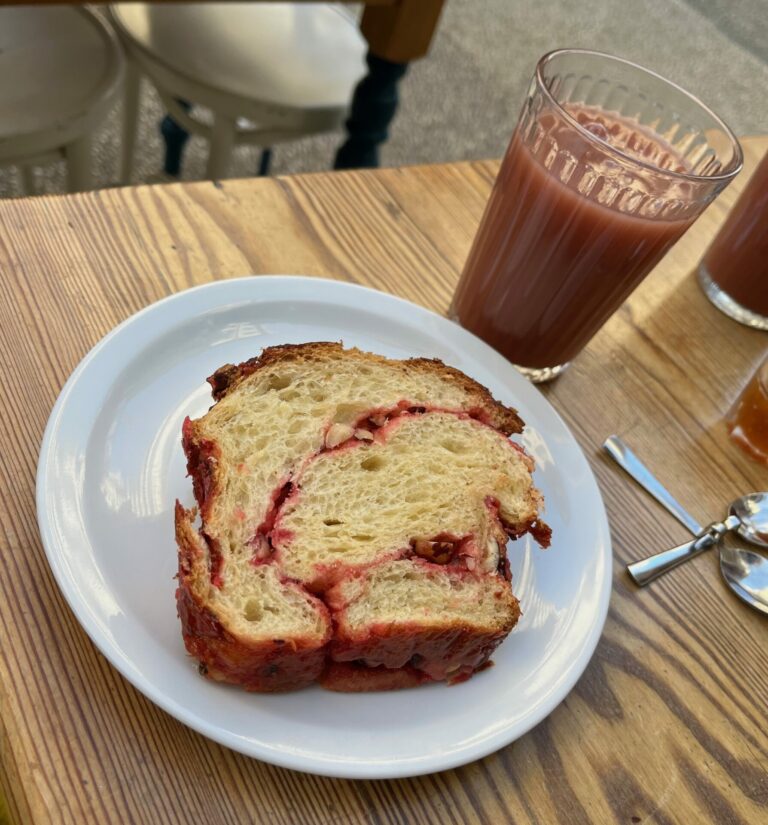 Lyon is famous for its pralines, chopped almonds coated with carmelized coated sugar, then dyed pink. Here the pralines are baked into a French breakfast brioche. But like the classic French baguette, brioche aux praline must be finished on the day they’re purchased …

While we didn’t try any of the gastronomic specialties that Lyon is famous for, on my son-in-law’s recommendation, I did order Lyonnaise quenelles. Quenelles are a kind of fish dumpling (traditionally, pike from the Saône), wrapped in panade, a dough made from flour, butter, eggs, and milk. The small dumplings are poached in broth, then topped with tomato, béchamel, or crayfish sauce and put in the oven for 15 minutes. Ils sont délicieux! 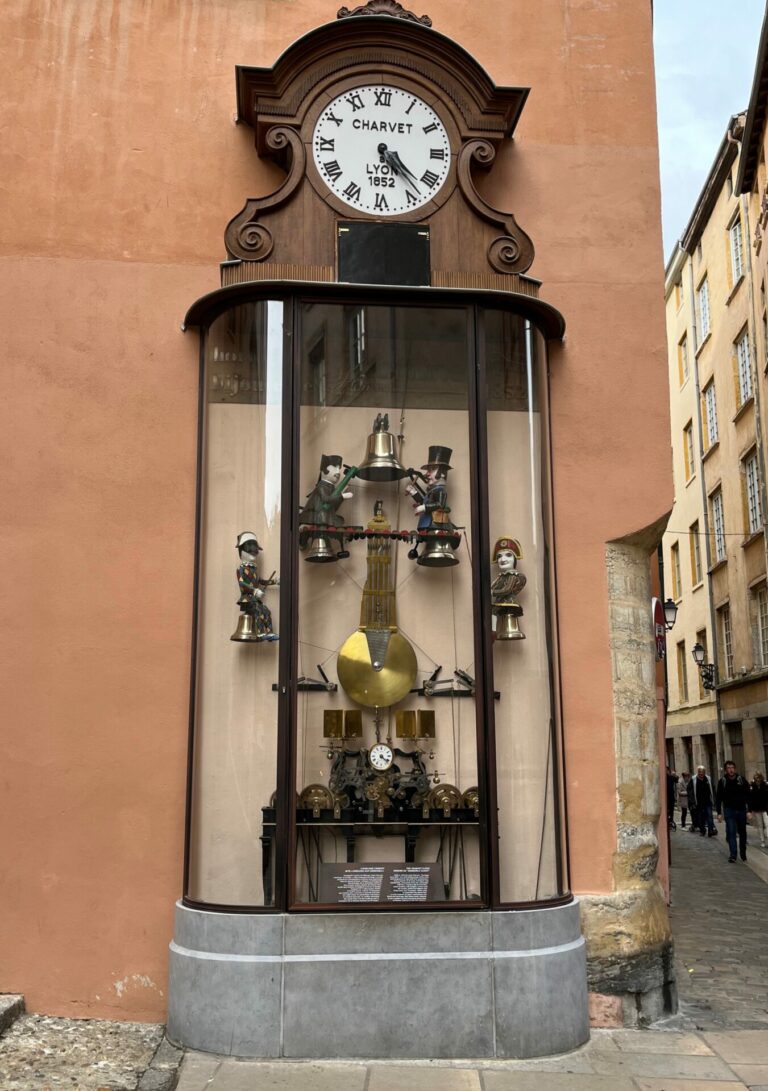 The Charvet clock, constructed by professional watchmaker Louis Charvet, was put in place on the rue de la Poulaillerie in 1864. In 2020, it was taken apart and restored, then moved to the entrance of the Renaissance-era hôtel de Gadagne. We waited about 20 minutes for the figures to begin ringing the various bells, as did a large crowd that gathered at the street corner. The hôtel has the largest courtyard in Vieux Lyon, spiral staircases, huge fireplaces, a painted ceiling, and the musée d’Histoire de Lyon, the Lyon History Museum, which we went through. 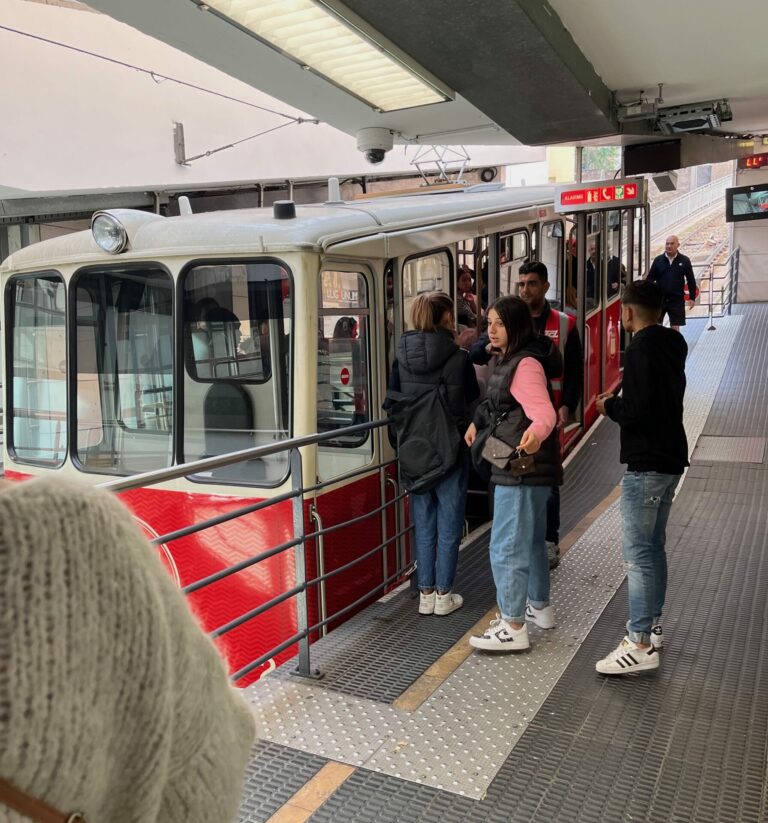 If you’re visiting a city built between two hills, you need to prepare for a lot of walking up and down. We wanted to go to the basilica of Notre-Dame de Fourvière, perched high above the city. Lyon’s city parents do need to invest in some better signage because we found no obvious signs saying “par ici,” or “this way to the big church.” We could see the massive building, but how to get up there? We did find a long steep road winding up the hill, but after watching several people stumble as they tried to maneuver back down, we decided to look for a funicular. A funicular is a very short railway, built on a steep incline. Lyon used to have five funiculars but only two are still operating. The one-way trip up the hill to the basilica was 2 euros. 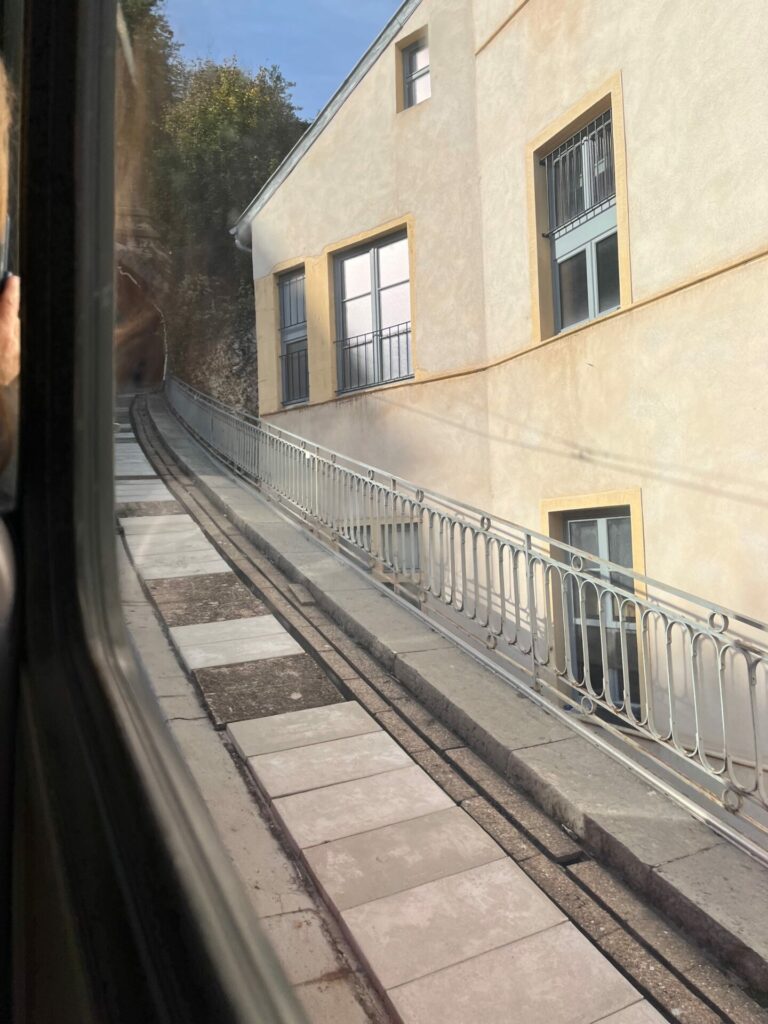 The path alongside the funicular, in case anyone still wants to walk up. 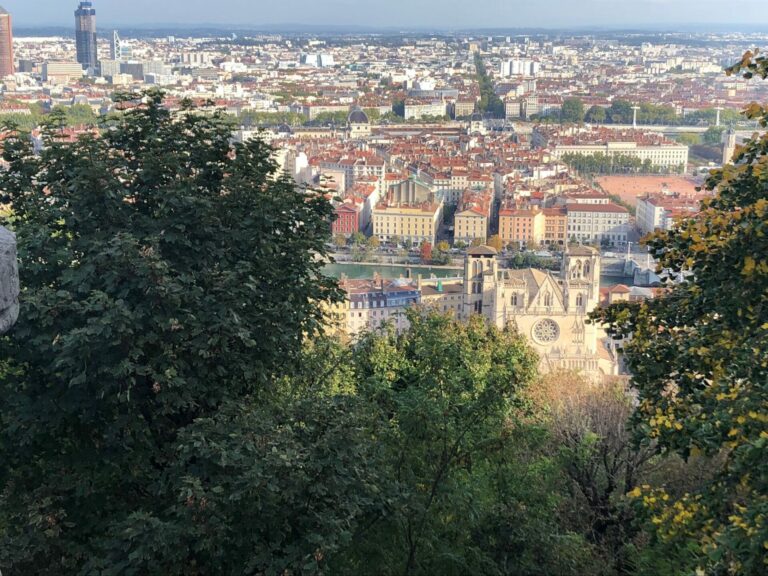 the top of Fourvière, Lyon FranceOctober 9, 2022

The basilica’s grounds are secured by a long fence (so no one tumbles down the steep hill) and provide some spectacular views of the city below. The ancient Gothic cathédrale Saint-Jean-Baptiste de Lyon is visible through the trees, as is modern-day Lyon, at the top of the picture. 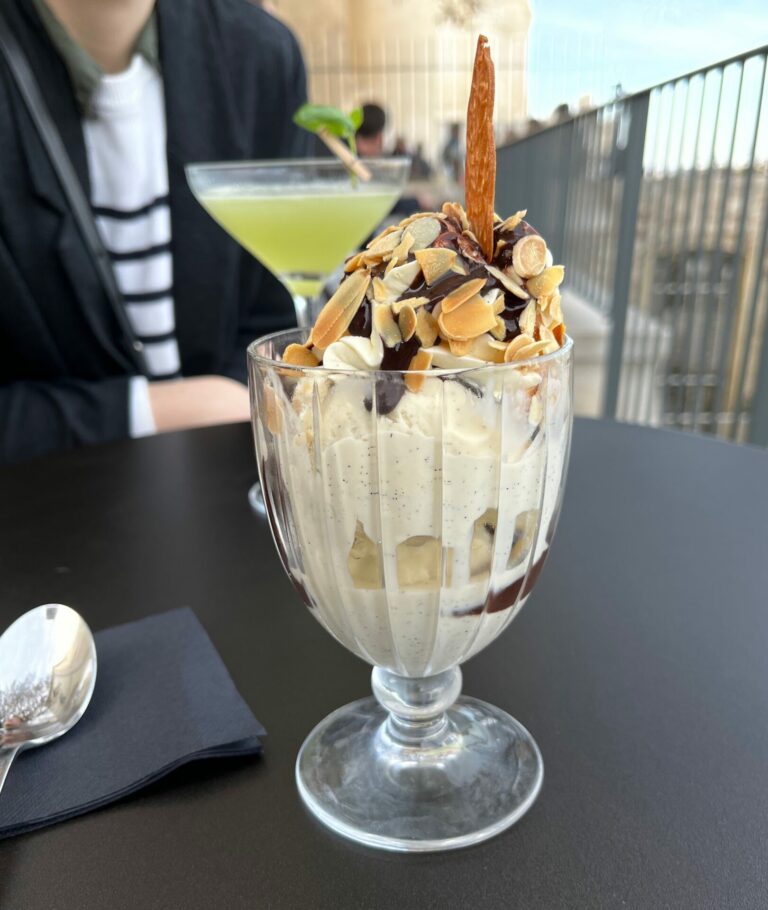 We decided to stop at the small café on the basilica grounds. I had a dame Blanche, or White Lady. Made with vanilla ice cream, thick warm chocolate sauce, toasted almonds, and a lot of whipped cream, it is similar to an American ice cream sundae. That’s an almond-based cookie sticking out the top. My daughter went for a basil-flavored alcoholic refreshment. 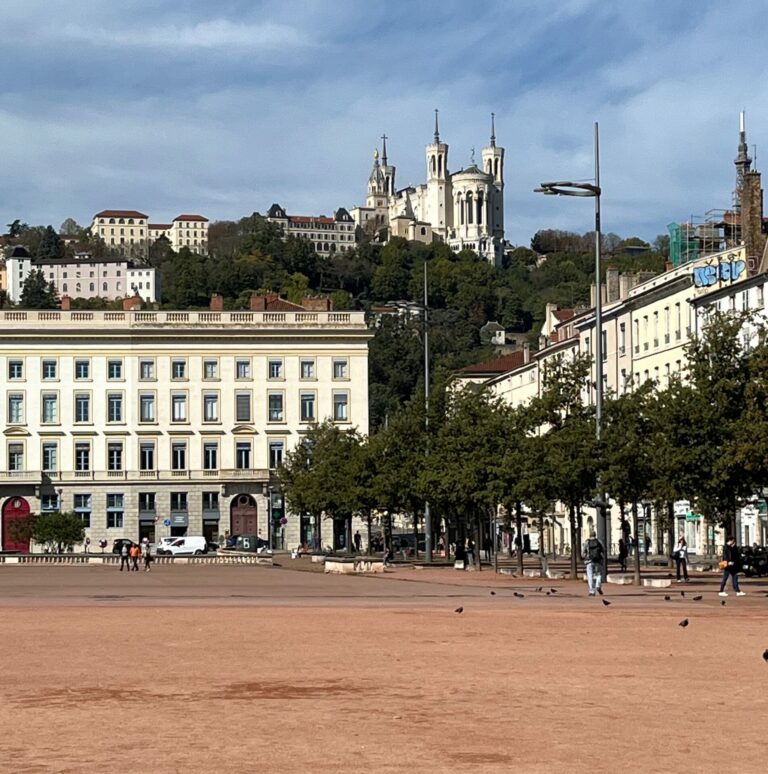 Back down at the bottom of Fourvière, at one end of le place Bellecour, Lyon’s city square, with the basilica rising high above. The place is huge, covering some 15 acres. The third largest such square in France (Paris’s place de la Concorde is about a third bigger), Bellecour is also the largest pedestrian-only public square in Europe.