Via Today, a video of dogs shaking water and/or drool all over the place:

The biggest, drooliest one is French mastiff with the fancy-sounding appellation “Dogue De Bordeaux.” Lately, the mister has been trying to talk me into adding a mastiff to our menagerie: Apparently he feels outnumbered since all the residents of our homestead aside from himself are female — yes, even the chickens.

I’m not sure how having a male dog on the place (in an “altered” state!) would really address the gender imbalance, but in any case, why a mastiff, I wonder? We’ve always had boxers, and the mister is the driver behind that — his family have all been boxer people from way back. That’s fine with me; boxers are wonderful dogs.

But if I were comparing traits of other types of dogs to add to the mix, MORE JOWLS! wouldn’t be on my list. Nor am I thrilled about the prospect of having a dog that outweighs me by a hundred-plus pounds competing for couch space. Anyone here friends with a mastiff?

END_OF_DOCUMENT_TOKEN_TO_BE_REPLACED

I’m watching the abysmal Bucs play the horrid Falcons. It is, in the theft-worthy words of Dolly Llama from yesterday’s college football thread, like watching “two mules fighting over a turnip.” But Go Bucs.

We are also monitoring Miami vs. Buffalo, where the Bills have a 14-point lead in the first quarter. Booo! The mister is a Buffalonian, so he’s happy with that development. I’m hoping Miami comes back and crushes the Bills like a rotten grape.

Please feel free to discuss football or whatever else.

END_OF_DOCUMENT_TOKEN_TO_BE_REPLACED

Lord, the Gators suck. It’s going to be a long season.

END_OF_DOCUMENT_TOKEN_TO_BE_REPLACED

George Zimmerman’s defense attorney will be the featured speaker at a Gun Rights Preservation Forum next month in Viera.

The Nov. 4 event, organized by the Republican Liberty Caucus of Central East Florida, also will include a raffle in which the prize is a Kel-Tec 9 mm semiautomatic pistol and a Bible.

Bob White, chairman of the Republican Liberty Caucus and evidently far less truthful and courageous than the species of ground-dwelling bird his name recalls, claims it’s just a coincidence that Zimmerman’s lawyer is an event speaker and that one of the raffle prizes is the same type of gun Zimmerman used to kill unarmed teenager Trayvon Martin.

That’s bullshit, and White is a liar and a sorry excuse for a human being. It would be comforting to think that such an event is just a gathering of bloodthirsty, fringe-dwelling loons who swap homemade bullet recipes and sell each other seed vaults on an obscure website.

But the article notes that event participants include the county sheriff and the newspaper’s public interest editor. This gives it an imprimatur of respectability it doesn’t deserve. Do they show up at Klan rallies too and pretend those events are just a benign component of a diverse political mosaic? Disgusting.

END_OF_DOCUMENT_TOKEN_TO_BE_REPLACED 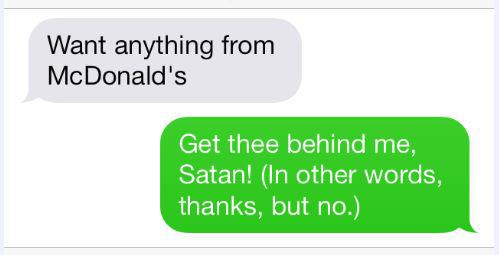 Except that I’m making enchiladas tonight. What are y’all up to? Please feel free to discuss whatever.

END_OF_DOCUMENT_TOKEN_TO_BE_REPLACED

Jim DeMint, who fittingly occupied John C. Calhoun’s old Senate seat before he decamped for a wingnut welfare gig at Heritage, published a screed in the WSJ today that was two parts “la-la-la-I-can’t-hear-you” and one part argument for a modern twist on nullification.

The editorial, entitled “We Won’t Back Down on ObamaCare,” serves notice that the teaturd lemmings in Congress will continue to try to overthrow a law that was duly debated, legislated and upheld by the highest court in the land plus a national election. DeMint gives three reasons why the gallant cause to combat ObamaCare must continue:

The first is that ObamaCare was not the central fight in 2012, much to the disappointment of conservatives. Republicans hoped that negative economic news would sweep them to victory, and exit polls confirmed that the economy, not health care, was the top issue. The best thing is to declare last year’s election a mistrial on ObamaCare.

A “mistrial” — are you fucking kidding me? We don’t need to consult a “word cloud” of Republican talking points for the 2012 election to know “ObamaCare” would show up in a big fat font. It was a major issue by any rational measure, and even if it weren’t, exit polls aren’t a sane basis to nullify laws. There was an election. The GOP lost.

Second, the lives of most Americans are not dominated by the electoral cycle. They shouldn’t have to wait three more years for Congress to give them relief from this law, especially when the president has so frequently given waivers to his friends. Full legislative repeal may not be possible while President Obama remains in office, but delaying implementation by withholding funds from a law that is proven to be unfair, unworkable and unaffordable is a reasonable and necessary fight.

Take it up with the Founders, Jimbo. And you had your shot in the last election cycle. You lost.

There’s a third reason not to stop fighting. Forget the consultants, the pundits and the pollsters; good policy is good politics. If the Republicans had not fought on ObamaCare, the compromise would have been over the budget sequester. Instead, they have retained the sequester and for the past three months ObamaCare and its failings have been front and center in the national debate. Its disastrous launch was spotlighted by our defund struggle, not overshadowed, as some contend. With a revived and engaged electorate, ObamaCare will now be the issue for the next few years.

No, what’s been front and center is the irresponsible and reckless behavior of the GOP — so much so that it’s overshadowed the glitchy healthcare exchange rollout. Only someone who is irrevocably divorced from reality could claim that Cruz & Co.’s disastrous nullification attempt was a win for the GOP. And make no mistake, fellow citizens, that’s what we’re dealing with here: people who are completely unmoored from facts. The kicker:

These are the reasons we fought so hard to get Washington to listen to the American people and take action to stop ObamaCare, and it is why so many are thankful for the courageous leadership of people like Sens. Ted Cruz and Mike Lee, and conservatives in the House of Representatives. The law is economically unstable, financially irresponsible and harmful to hardworking Americans.

No, the Republicans are fomenting economic instability, behaving in a financially irresponsible manner and doing measurable harm to hardworking Americans. It’s been laid bare for all to see, and the American people reject DeMint’s Calhoun Doctrine 2.0 by huge margins.

When he was still a senator instead of a wingnut welfare queen, DeMint famously predicted that healthcare reform would be Obama’s Waterloo. But it’s looking more like the GOP’s Appomattox.

END_OF_DOCUMENT_TOKEN_TO_BE_REPLACED

You can watch it live here.

ETA 1:
Yay! He’s calling bullshit on the Republicans for manufacturing crises! Pointed out that shutdown was costly and damaging. Pointed out that deficits were already falling. “The only thing putting us at risk is repeated brinksmanship” — quote from credit analysts.

ETA 2:
“To all my friends in Congress, the way we do business has to change.”

“We need to stop focusing on lobbyists, bloggers [WTF?!?!–ed.], activists on talk radio, and do what we were sent here to do…that’s why we’re here.”

ETA 3:
Three things we should focus on:

1) Balanced approach to a responsible budget — “budget shouldn’t be an ideological exercise…deficit is getting smaller, not bigger now…need to close corporate tax loopholes and invest in education, research, infrastructure…”

2) Finish the job of fixing our broken immigration system — “broad coalition behind reform…Senate has a bill with strong bipartisan support…if the House has ideas on how to improve it, let’s hear them…”

3) Pass a farm bill — “One that farmers and ranchers can depend on…one that helps vulnerable children…Senate has passed bipartisan bill…if House has ideas to improve it, let’s see them…”

ETA 4:
“I hope all of us have learned that smart, effective governance is important…Americans got an idea of what government does…we’ve heard ‘government is the problem,’ but we’ve learned we rely on it in many ways…”

ETA 5:
“Don’t treat government like the enemy or make it work worse. If you don’t like a policy — or a president, win an election. Don’t break it.”

Message to returning government workers: “Thanks for your service. What you do is important. It matters…”

ETA 6:
That’s all, folks. Very strong statement that put the blame squarely where it belongs, thanked those who deserve it and called out the saboteurs.