Standing in front of the Department of Homeland Security seal, President Obama looks poised to bring the hammer down on the Tea o’ Pee:

“My very strong suspicion is there are enough votes there” to pass the government funding legislation, he said during an unannounced stop at FEMA National Response Coordination Center in Washington, D.C. “Hold a vote. Call a vote right now. Let’s see what happens.”

END_OF_DOCUMENT_TOKEN_TO_BE_REPLACED

I dislike flying and almost never board a plane. But a plane almost crashed into me this weekend while I was innocently consuming mimosas and jalapeno potato chips at a tailgating party prior to the Gators-Razorbacks game in Gainesville, Florida.

A banner-towing plane went down. Luckily, there were no life-threatening injuries to the two people on board the plane OR the tailgaters on the ground. The plane and someone’s pick-up truck were pretty much destroyed, though.

Please talk about whatever.

END_OF_DOCUMENT_TOKEN_TO_BE_REPLACED 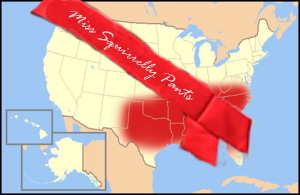 Aimai over at No More Mister Nice Blog has some interesting observations about the current budget and debt ceiling standoff. It’s worth reading in its entirety, but here’s an excerpt:

To refresh everyone’s memory we passed the 14th amendment because we were about to accept back into political life our former rebels and traitors–these men, once they were back in public life, were quite likely to repudiate the war debts of the victors or to once again engage in sabotage of the union. That is what this neo-southern confederate rump is doing: they are sabotaging the US Government and using the budget to do so. They are both smarter and more cowardly than the previous batch of Confederates. Let’s hope the current President can save the Union.

A guest on Chris Hayes’ program last night (a former official in the Reagan administration, IIRC) made a related point about the GOP morphing into a neo-confederate insurrectionist party. As we all know, Nixon’s “Southern Strategy” used the civil rights movement as a wedge to coopt the Dixiecrats. This former Reagan administration official argued that the Dixiecrats coopted the GOP instead, implying that “reasonable Republicans” like himself were then left behind.

The part about the Dixiecrat takeover is true enough, but when disgruntled Republicans heap all the blame on their Bible Belt crazies, it conveniently lets a lot of guilty people off the hook. Like Reagan himself, who inexcusably launched his presidential campaign from Philadelphia, Mississippi (where the three civil rights workers were famously murdered in the 60s) and trafficked in blatantly racist tropes throughout his presidency. As did every single one of his Republican successors.

As MLK noted, the arc of the moral universe is long, but it bends toward justice. The arc of the immoral universe is long too, and it bends toward insanity. Thus we behold the spectacle of the current Republican Party, with craven bagmen cowering before a phalanx of gibbering, bomb-throwing nutbags who are intent on bringing the whole edifice crashing down on the heads of the righteous and unrighteous alike.

The loons aren’t just from the former Confederate states either; they hail from Alaska, Minnesota, Iowa, Nebraska, Utah, Arizona, Kansas, Colorado – even California. Patient Zero may have been caught the fever south of the Mason-Dixon line, but Republicans in every region avidly aided the spread of the infection by splicing Confederate grievances and religious zealotry with anti-government paranoia. Exhibit A: Michele Bachmann.

The Republicans transformed the traditional Bible Belt into a Sash of Insanity that stretches from the Gulf of Mexico to the Arctic Ocean. They built that.

END_OF_DOCUMENT_TOKEN_TO_BE_REPLACED 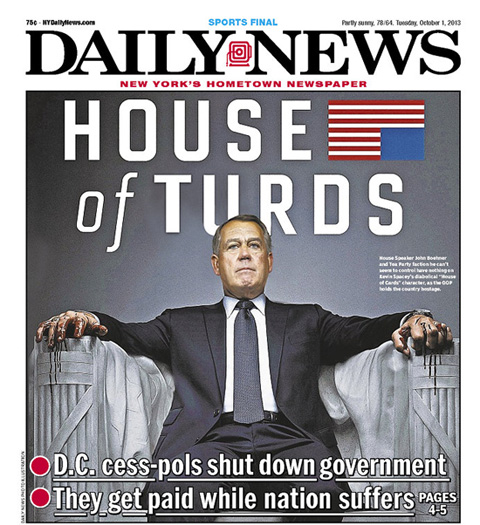 Well! How is your local news covering the shutdown? My media market paper also features a photo of Boehner, in which he looks somewhat poleaxed, with Cantor lurking in the background.

RE: the photo above, via TPM:

Under the headline “House of Turds,” the latest cover of the New York Daily News shows Boehner seated at the Lincoln Memorial with blood dripping from his hands — a send-up of the popular Netflix series “House of Cards.”

Uh, I don’t think that’s supposed to be blood…

Also, my local news channel app just informed me that President Obama will address the government shutdown in a statement at 12:25. Good. I’m hoping he takes a tone similar to yesterday’s, in which he made it clear who the miscreants are. He didn’t sound ready to negotiate with the anarchist wing of the plutocrat party then, and I sincerely hope he holds firm today.

END_OF_DOCUMENT_TOKEN_TO_BE_REPLACED

President Obama just concluded brief remarks on the impending government shutdown, and it was a strong, targeted statement, laying the blame exactly where it belongs. One quote:

You don’t get to extract a ransom for doing your job.

I’ll add a link to a transcript when one becomes available.

UPDATE: And here’s a link.

END_OF_DOCUMENT_TOKEN_TO_BE_REPLACED 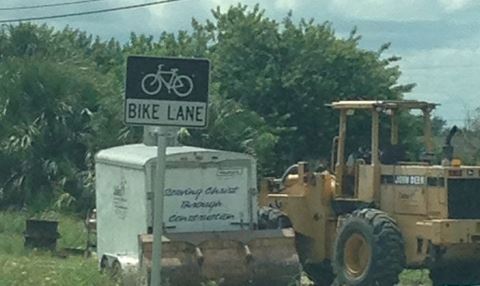 In case you can’t make out the message on that roadwork trailer, it says, “Serving Christ Through Construction.” Lord knows that particular stretch of highway could use some patchwork, and if the project makes bike lane users less likely to get sideswiped by a rock truck, we shouldn’t begrudge a job creator a few jewels in his heavenly crown, right? Please feel free to park your random comments, complaints and observations here.

END_OF_DOCUMENT_TOKEN_TO_BE_REPLACED

And Christ on a cracker — bobbled punt already? But the ‘Tors recovered a fumble on the next play. Chomp!