Republicans hate it, Democrats love it and independents narrowly approve:

END_OF_DOCUMENT_TOKEN_TO_BE_REPLACED

It probably speaks poorly of my character that I post more about conservative tribulations than liberal triumphs. But that’s how I roll, and there’s no shortage of good news posts around here these days, so let us savor the impending downfall of a lawless scoundrel who richly deserves the dump truck-load of trouble that’s barreling his way: James O’Keefe, the proprietor of the mendaciously misnamed Project Veritas.

An unmitigated asshole, O’Keefe rose to prominence in conservative circles with a “sting” video, which, despite being ridiculous and deceptively edited, brought down ACORN, an organization that had the temerity to ensure poor people were counted in the U.S. Census and encouraged to vote. Thanks to O’Keefe’s lies (and cowardly defensive crouches assumed by some Democrats who should have known better, it must be noted), ACORN was effectively destroyed in the U.S.

O’Keefe never quite matched that “success.” Subsequent stunts aimed at a woman who worked for CNN, New Jersey teachers, Medicaid offices in several states, polling places, newspapers, etc., were redolent of flop sweat and misogyny. That odor wafting from O’Keefe reached Donald Trump’s nostrils in 2016, and Trump donated (other people’s money for sure) to Project Veritas and eagerly elevated an organization and leader almost as gross, tacky and deceitful as himself.

In 2020, O’Keefe attempted to repay the favor by helping the future twice-impeached, two-time popular vote loser Trump secure another term — with the aid of a pair of Florida scumbags who stole a diary belonging to President Biden’s daughter. The scheme backfired spectacularly, and last fall, the feds raided O’Keefe’s NYC apartment and the homes of some of his associates.  [NYT]

The raid occasioned much meeping about press freedom from fascists who would shut down the independent press within five minutes of getting their fat fascist fingers on the levers of power. And if O’Keefe had just paid the Florida scumbags for the diary, that would be sleazy but possibly protected by the First Amendment.

But O’Keefe also instructed the Florida scumbags to steal more stuff and dispatched an employee across state lines to transport the stolen goods, activities that are not protected by the First Amendment and are in fact crimes that can result in serious legal consequences. O’Keefe is not now and never has been a journalist, and the Florida scumbags who stole the diary flipped and have text messages that detail the shady scheme, so it looks like O’Keefe is probably o’fuct. [TPM]

This is all extra-hilarious because O’Keefe never even published the fucking diary! Before the election, he tried to conduct yet another lame “sting” on Biden’s daughter, whose lawyers took his “interview” request as an extortion attempt. That prompted them to alert federal prosecutors, and here we are. To sum up, it appears O’Keefe’s grift empire will collapse in yet another epic flop.

END_OF_DOCUMENT_TOKEN_TO_BE_REPLACED

Happy Redacted Affidavit Day! I’ll post a link to the doc online when I find one. Here’s an excerpt from WaPo’s breaking news page on the event:

A redacted version of the affidavit supporting the request to search former president Donald Trump’s Mar-a-Lago residence and club was released in a federal courthouse in Florida, potentially shedding new light on the high-profile investigation into the possible mishandling of classified documents…

The affidavit likely contains key information about the investigation into classified documents that were kept at Mar-a-Lago after Trump left office, including why FBI agents suspect crimes may have been committed. On Aug. 8, FBI agents searched the estate in Palm Beach and carted away about 20 boxes from a bedroom, office and a first-floor storage room. Authorities have said some of the seized documents included highly classified national secrets.

The warrant authorizing the search said agents were seeking all “physical documents and records constituting evidence, contraband, fruits of crime, or other items illegally possessed in violation of three potential crimes,” including a part of the Espionage Act outlawing gathering, transmitting, or losing national defense information. The warrant also cites destruction of records and concealment or mutilation of government material.

According to CNN, the documents included sensitive material on the country’s human intelligence assets. Big if true! The person on camera waving the print-out around showed off some pages that were basically all blacked out. The intel analysts on CNN seem horrified by the descriptions of the documents, for what it’s worth.

UPDATE: Read the document at the NPR site here.

END_OF_DOCUMENT_TOKEN_TO_BE_REPLACED

Just after it released the ad, Masters’ campaign published an overhaul of his website and softened his rhetoric, rewriting or erasing five of his six positions. NBC News took screenshots of the website before and after it was changed. Masters’ website appeared to have been refreshed after NBC News reached out for clarification about his abortion stances.

“I am 100% pro-life,” Masters’ website read as of Thursday morning.

That language is now gone.

So the people who’ve been selling themselves as hard-right culture warriors for months are going to switch gears and market themselves as moderates for the duration? I mean, that kind of thing can work — we’ve all seen it.

But the switcheroo might be a harder sell since the extremist kooks Republicans put on the SCOTUS have ripped a right away from half the voting population. Even DeSantis is subtly back-pedaling: [Politico]

DeSantis said he was in favor of additional “pro-life protections” after the Supreme Court overturned Roe. He recently signed Florida’s ban on abortions after 15 weeks into law, but the governor has not articulated what other steps he would take or accept. During a press conference Tuesday, DeSantis said “the first thing” is to “defend what we’ve done,” a reference to the ongoing legal challenge to the new ban. “We want to make sure what we’ve done will stick,” said DeSantis, adding that the current law was “difficult to achieve.”

Framing it as an issue of legal caution is absurd because DeSantis is already shoveling millions of Florida taxpayer dollars to a wingnut chum’s fancy DC law firm to defend the many unconstitutional laws he’s already signed. At $725 an hour!

The linked Politico article also includes results of a new poll on the Florida gubernatorial race. The news isn’t great — DeSantis is up 51% to Crist’s 46%. But the poll also found that independents — about a third of FL voters — are “turning on DeSantis,” and it was taken before Crist walloped Fried this week.

According to the pollsters, DeSantis drops below 50% when the homeowners insurance crisis and abortion rights topics are introduced. So Crist knows where to focus. I hope he also pounds on the guns issue because DeSantis has said he will pursue “open carry” in a second term, and the last fucking thing on earth Florida needs is open carry. Jesus God, read a room.

Anyhoo, it’s an uphill climb, but I’m not giving up on this race. It is definitely possible to make DeSantis a one-term governor and zero-term president.

PS: Twice in the last year, most recently yesterday, I helped someone move. Why the fuck are people asking a not very fit and decidedly middle-aged woman to carry heavy objects in the hot sun? If I’m ever asked again, I’m just gonna laugh and say, “I’m an old woman! Fuck off!” I mean, there have to be some advantages, right? I’m going to claim that one, goddamnit!

END_OF_DOCUMENT_TOKEN_TO_BE_REPLACED

I think this was the first drawing I ever posted here. It illustrated a post that attempted to explain the Florida electorate in the context of the 2012 GOP primary. Not much has changed except The Villages is bigger and now merits its own regional designation that is distinct from Orlando, which could be labeled something like “MIGHT AS WELL BE INDIANA.” 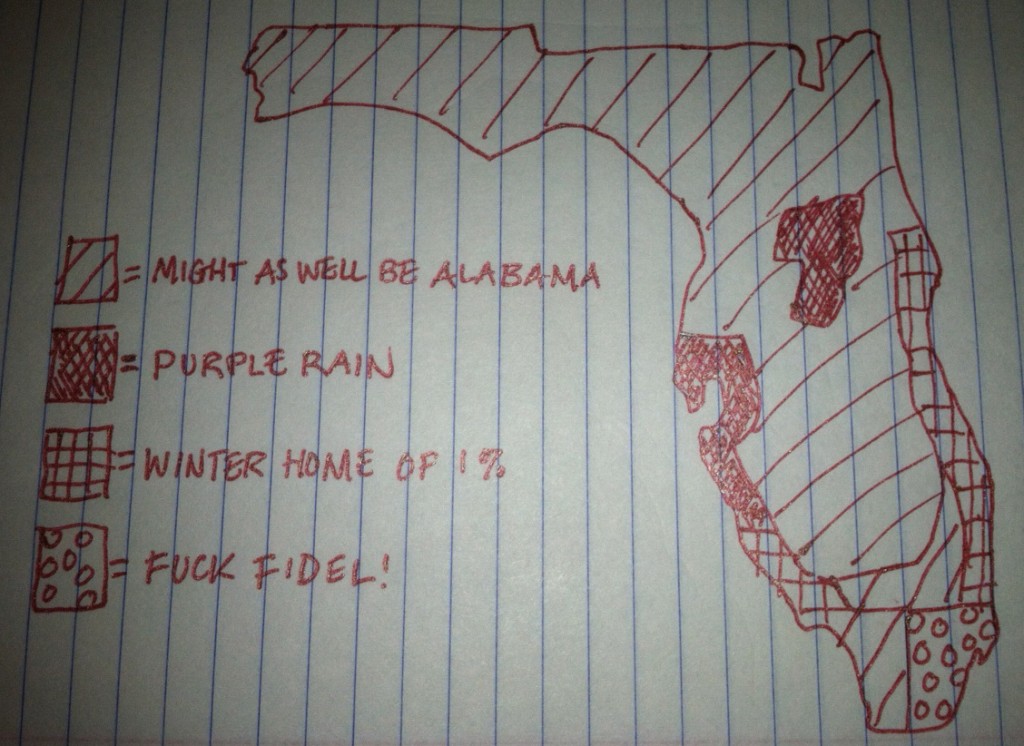 Things I’ll be watching for tonight:

On the latter point, if Loomer wins the GOP primary, she wins the general election. Period. Doesn’t matter how fucking nuts she is or how strong her resemblance to the love child of Elvira and Max Headroom. That’s the way the 11th rolls. Recent reports show her out-raising Webster and winning The Villages Trump-Hump Hookup Hoedown straw poll (not the real name of that organization, but I’m too lazy to look it up).

That said, when DeSantis tore up the map approved by his Republican sycophants in the Florida statehouse and redrew it himself to disenfranchise black people even more, he nudged the Florida 11th to the east a bit and dragged the coastal border of the 12th north, meaning we won’t be represented by either Loomer or Webster because now we’re in the 12th. Our rep will be a different garden-variety corrupt Republican.

END_OF_DOCUMENT_TOKEN_TO_BE_REPLACED

Who could have predicted that putting a crook like Rick Scott in charge of the National Republican Senatorial Committee would make all the money go poof? Excerpts from an article in The Washington Post:

Republican Senate hopefuls are getting crushed on airwaves across the country while their national campaign fund is pulling ads and running low on cash — leading some campaign advisers to ask where all the money went and to demand an audit of the committee’s finances, according to Republican strategists involved in the discussions…

“If they were a corporation, the CEO would be fired and investigated,” said a national Republican consultant working on Senate races. “The way this money has been burned, there needs to be an audit or investigation because we’re not gonna take the Senate now and this money has been squandered. It’s a rip-off.”

The NRSC’s chairman, Sen. Rick Scott of Florida, has already taken heat from fellow Republicans for running ads featuring him on camera and releasing his own policy agenda that became a Democratic punching bag — leading to jokes that “NRSC” stood for “National Rick Scott Committee” in a bid to fuel his own presumed presidential ambitions.

Seriously, what did they think was going to happen? It would be like entrusting me with the nation’s store of pinot noir. It’s only slightly less dumb than leaving a big fat bag of money with Trump and being shocked when it disappears. And also, hahahahahaha!

END_OF_DOCUMENT_TOKEN_TO_BE_REPLACED

There’s been a ton of analysis of Russia’s military failure in Ukraine — including in the nightly reports of our own Mr. Silverman. But an in-depth WaPo article published this morning suggests Russia’s intelligence failure was possibly even more catastrophic, or at least it set the stage for the fail-parade that followed and continues to this day. A few excerpts:

So certain were FSB operatives that they would soon control the levers of power in Kyiv, according to Ukrainian and Western security officials, that they spent the waning days before the war arranging safe houses or accommodations in informants’ apartments and other locations for the planned influx of personnel…

An agency whose domain includes internal security in Russia as well as espionage in the former Soviet states, the FSB has spent decades spying on Ukraine, attempting to co-opt its institutions, paying off officials and working to impede any perceived drift toward the West. No aspect of the FSB’s intelligence mission outside Russia was more important than burrowing into all levels of Ukrainian society.

And yet, the agency failed to incapacitate Ukraine’s government, foment any semblance of a pro-Russian groundswell or interrupt President Volodymyr Zelensky’s hold on power. Its analysts either did not fathom how forcefully Ukraine would respond, Ukrainian and Western officials said, or did understand but couldn’t or wouldn’t convey such sober assessments to Russian President Vladimir Putin.

Just massive hubris all around, it sounds like. The whole thing is worth a read.