Ambulatory Sears mannequin Mitt Romney made a swing through the Sunshine State this week, kissing ass (“Gosh! The energy. The Cuban American energy and passion is so wonderful!”) and collecting a couple of mill from wizened snowbird socialites for his campaign war chest.

He also delivered speeches containing scads of well-documented lies. So what does PolitiFact do when a big fat liar comes to its hometown to tell big fat lies?

It sifts through the veritable mountain of bullshit disgorged from the Romney gullet and finds a meaningless, minor pebble of a point to subject to its high-powered scrutiny. It finds Romney wrong in a minor way on the facts and disingenuous in a major way on the substance and renders its verdict: MOSTLY TRUE!

Don’t ever change, PolitiFact: You are the appendix of our political intestines.

END_OF_DOCUMENT_TOKEN_TO_BE_REPLACED

The Marquis de Mittens’ former Lt. Governor Kerry Healey went on CNN yesterday to counter charges that her old running mate is a heartless prick. As evidence, she cited his reaction during a GOP debate when a certain goofy bastard could not remember all three of the government agencies he vowed to abolish as president:

In defending Romney as “deeply compassionate” and “unfailingly kind,” she pointed to moments during the GOP primary when Romney was “being attacked from every side.”

“His response was always professional, calm, civil,” she pointed out. “In fact, he even intervened on behalf [of] — to try to help — Gov. Perry when he was stumbling [in attempting to remember a talking point during a debate]. His impulses are very kind impulses and there should be no debate about whether or not Gov. Romney is a bully.”

For some reason, I was reminded of this scene from “There’s Something About Mary:”

Matt Dillon’s character is a lot like Romney, only without the gazillions of dollars. He’s a liar who tries hard to be ingratiating but kind of sucks at it.

END_OF_DOCUMENT_TOKEN_TO_BE_REPLACED

NEW YORK – May 11, 2012 – Roiled by a lengthy Republican primary that featured sickly-wife dumper Newt Gingrich in the role of family values advocate, prissy uterus invader Rick Santorum as a small government champion and multimillionaire vulture capitalist Mitt Romney shedding Armani suits in favor of mom jeans and “work” shirts as he positioned himself as a regular guy (with a car elevator), the global parody and satire industries utterly collapsed Friday.

The market sector had teetered on the verge of collapse this week following an accusation from four-times-married drug addict Rush Limbaugh that President Obama had attacked the institution of marriage by coming out in favor of same-sex unions. But some analysts had thought the sector was positioned for recovery.

Those hopes were dashed early Friday when parody and satire futures were bludgeoned by the publication of an opinion piece by 21-year-old single mom Bristol Palin. The daughter of failed vice-presidential candidate and serial quitter Sarah Palin criticized the president for allowing his daughters to influence marriage equality policy, decried the persecution of conservative Christians and urged the president to direct his children since “dads should lead their family.”

“Parody and satire were already on life support thanks to Rush,” said analyst Seymour Butts of the Under the Bleachers Report. “But when Bristol let loose, even hard-bitten industry veterans who had survived the Nixon and Reagan years threw in the towel.”

Most experts were unable to articulate a scenario under which parody and satire could recover. However, at least one long-term analyst envisioned a resurgence contingent upon a direct asteroid strike on the earth that wipes out all existing life, after which single-cell organisms might once more emerge and evolve to acquire language skills.

END_OF_DOCUMENT_TOKEN_TO_BE_REPLACED 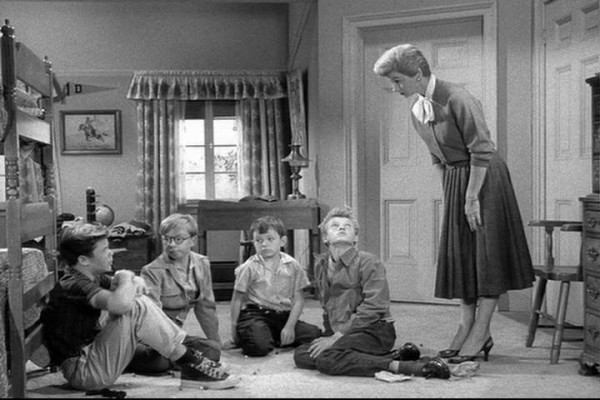 Mrs. Mitt seems like a nice enough person — she comes across as exponentially more human than her husband. Admittedly, that’s a low bar since anyone who seemed less human would be relegated to the cargo hold of a commercial airliner without a notarized document from an anthropologist.

But Mrs. Mitt seems as pleasant as a clueless rich lady could possibly be when she’s trying to sell you an animatronic plutocrat with an anti-99%, anti-woman and anti-gay agenda. Sort of like a defanged Lynne Cheney. So I don’t mean to pick on her. But this passage of a Mothers’ Day op-ed she penned for USA Today struck me as odd:

People often ask me what it was like to raise five boys. I won’t sugarcoat it. There were times I wanted to tear my hair out. I can remember visiting my friends’ houses, seeing their daughters’ manners, the way they helped with the chores. Then I would return home to my boys, hoping only that my house was still intact.

Sweet al dente Flying Spaghetti Monster, is she actually suggesting that daughters are universally better mannered and tidier than boys? I’d disabuse her of that notion by posting a picture of my teenage daughter’s room right now, but that would be invading the kid’s privacy. Trust me, I’d stack that girl’s smart mouth and capacity for generating household-roiling mayhem against all five Little Lord Fontleromneys.

But that’s not all that bugs me about the piece. It illustrates something more broad and disturbing — a weird trapped-in-amber vibe to both Romneys, something that can’t really be explained away as a generational thing. They are about the same age as my parents, and though my parents’ political views differ significantly from the Romneys’ (my dad is way to their right and my mom is way to their left — divorced ages ago, obviously!), you can tell my parents experienced the decades that followed 1959 and took away certain lessons, for good or ill.

The Romneys, not so much. To paraphrase a line from “Field of Dreams,” it seems like they had six helpings of the 1950s and landed in the second decade of the 21st century pretty much unscathed. It will be a weird rolling-back in more ways than one if, FSM forbid, Mittens becomes president.

END_OF_DOCUMENT_TOKEN_TO_BE_REPLACED

So who will have the dumbest, most hysterical response to President Obama’s announcement that he favors marriage equality? It’s impossible to say and too early to tell, but here’s the immediate reaction of a go-to source for internet stupidity:

Yep, it’s all about attacking the Christian Church. Sweet Merciful Flying Spaghetti Monster, that nitwit must scoop up his bean dip with lead paint chips.

END_OF_DOCUMENT_TOKEN_TO_BE_REPLACED 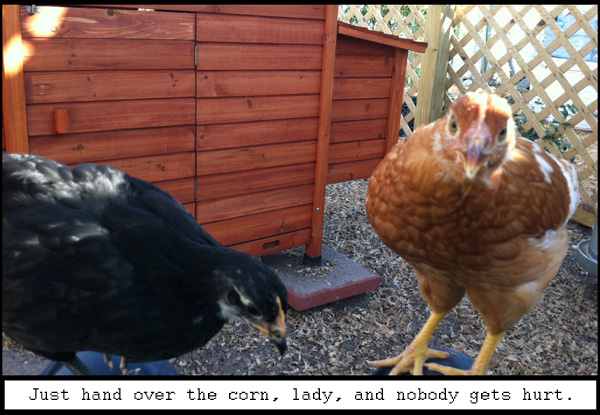 I thought we could use one. Here’s a couple of my chickens, as of yesterday. The red one is named Ravenclaw, and the black one is called Ninja. (The kids named them that, not me.)

END_OF_DOCUMENT_TOKEN_TO_BE_REPLACED

Well, at least the Obamacare-inspiring heretic isn’t a blah person.

Honest to god, I have zero faith in the American people’s sagacity (the dumb motherfuckers almost elected George W. Bush twice!), and the economy will probably still be in the shitter this November, which should doom the president’s reelection chances under normal circumstances.

But these aren’t normal circumstances. Romney is just an awful, horrible, terrible, heinous, unlikable candidate, and I’m not sure “at least he’s not Obama” will be enough to put Mittens over the top, since that line really only resonates with people insane enough to think Santorum, Gingrich, Perry, Bachmann, Cain, et al, aren’t bug-eyed loons and/or booger-eating idiots.