Hello kiddies… are we all enjoying day three million of the 2016 election campaign?

I’m distracting myself from refreshing PEC just one more time by listening to the big, beautiful and very sexy Lizzo, while baking laxative-laced treats for the Trump campaign after party.

What’s keeping you sane? (I know, there are some fundamental assumptions there that may not be justified)

END_OF_DOCUMENT_TOKEN_TO_BE_REPLACED

Note that this video has trigger warnings for meat and cold rooms.

END_OF_DOCUMENT_TOKEN_TO_BE_REPLACED

1 The fool hath said in his heart, There is no God. Corrupt are they, and have done abominable iniquity: there is none that doeth good.

2 God looked down from heaven upon the children of men, to see if there were any that did understand, that did seek God.

3 Every one of them is gone back: they are altogether become filthy; there is none that doeth good, no, not one.

4 Have the workers of iniquity no knowledge? who eat up my people as they eat bread: they have not called upon God.

5 There were they in great fear, where no fear was: for God hath scattered the bones of him that encampeth against thee: thou hast put them to shame, because God hath despised them.

6 Oh that the salvation of Israel were come out of Zion! When God bringeth back the captivity of his people, Jacob shall rejoice, and Israel shall be glad.

EATA: I think I broke the internets.

I may just be very drunk.

EOATA: Shorter: Drunk fictional old lady likes a piece of music and makes an ass of herself. Normal day really.

I can’t remember who pointed to this in the comments, but thank you, and pipe up if you’d like a hat tip.

END_OF_DOCUMENT_TOKEN_TO_BE_REPLACED

Dear old Harry Reid continues to be out of fucks to give.

This is a moment of truth for Republicans. It is time for every Republican elected official in this county to revoke their endorsements of Donald Trump and state that they will not vote for their party’s nominee, who has been caught on tape bragging about routinely sexually assaulting women. There is no way to defend the indefensible. In the name of decency, Republicans should admit that this deviant – this sociopath – cannot be president.

My counterparts, Senator McConnell and Speaker Ryan, have endorsed a man who brags about sexually assaulting women. Many of my Republican colleagues have said they believe this man should be president. One even called him a role model.

What will it take for Republicans to walk away from Trump?

Bragging about sexually assaulting women is just his latest atrocity. He has called Mexican immigrants rapists. He has insulted our veterans and ridiculed the parents of a fallen soldier. He has called for discriminating against people based on their religion. He has cozied up to dictators like Putin and invited Russia to launch a cyberattack against America. He has encouraged violence at his rallies, especially against African Americans. He is clearly a racist. He questioned the judgment of a respected judge based purely on his Mexican heritage. He elevates those who traffic in White Nationalist rhetoric, and even hired a man with White Nationalist sympathies to run his campaign. He uses his charity to enrich himself and lies about his wealth. He is the first nominee in decades to refuse to release his tax returns, because he knows they will expose him as a fraud and reveal that he is not as rich as he says he is. He has a long history of discriminating against African Americans and still believes the Central Park Five are guilty even though another man confessed and was proven to be guilty by DNA evidence. He has repeatedly promoted anti-Semitic sentiment on social media.

What are Republicans waiting for?

What is it going to take for Republicans to discover even the barest modicum of decency and respect?

For the good of the country, I hope that my Republican colleagues do not try to circle the wagons around a man who brags about sexually assaulting women. Never in history has a party nominated someone more unfit to be president. There is still time for Republicans to acknowledge their mistake and salvage their dignity. They can do so by finally deciding to put the good of our country first.

END_OF_DOCUMENT_TOKEN_TO_BE_REPLACED

In yesterday morning’s open thread, p.a. (First!) mentioned this BBC article about Matthew Anderson’s tweet about Mark Forsyth’s claim (I think this sentence has gotten away from me) in his book “The Elements of Eloquence: How to Turn the Perfect English Phrase” that: 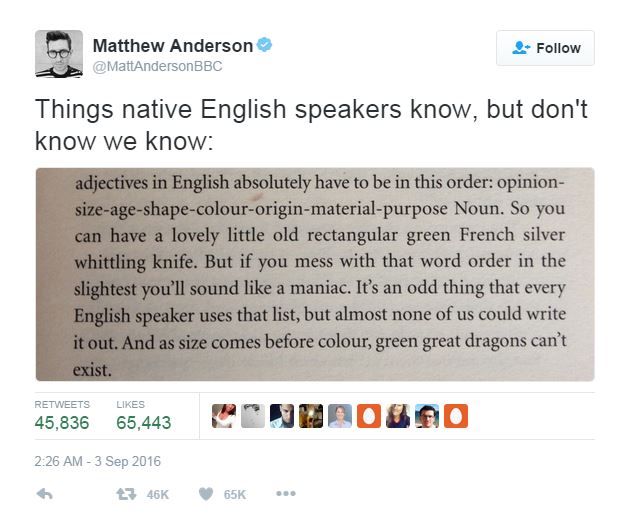 As Mark Liberman and his commenters point out at Language Log, Forsyth’s rule – a fixed order of adjectives from which an English speaker can never depart without sounding like Donald Trump on a meth and moonshine bender – is mostly bollocks. Beware of anyone who tells you that there are any unbreakable rules in English – a language which has fifteen different kinds of exceptions from every purported rule, just to fuck off the foreigners.

The reality is much more interesting and complex than Forsyth’s unbreakable rule – yes, we tend to use adjectives in a particular order, but we also swap them around depending on what idiom we are using, what effect we are trying for, what particular meaning we are trying to convey. “Grumpy old drunk lady” is subtly different to “Drunk, grumpy old lady”, although perhaps not when she’s pressed up in your face and breathing booze at you. Most of us would say “ugly little hands” but “big ugly hair”. We take pleasure in the leaping, lilting rhythm of words like “tiny fingered, cheeto-faced, ferret wearing shitgibbon” or “limping invisible down to the sloeblack, slow, black, crowblack, fishingboat-bobbing sea” – even if that “slow” (being, I suspect, opinion under Forsyth’s Rule) should really go in front of all those colours, and definitely not in the middle of them, unless you want to sound like a maniac, Mr Thomas.

There’s a lot of good stuff in the Language Log thread, including links to some very interesting articles.

Shorter Jonah Goldberg: Why is the Main Stream Media not talking about how it’s ok to refuse to make a Trump 2016 cake for a 17 year old girl?

END_OF_DOCUMENT_TOKEN_TO_BE_REPLACED

I didn’t encounter Phyllis Schlafly often – we were on opposite sides of the ERA campaign, and I made sure to avoid her for the most part because, well, because she wasn’t a very pleasant woman. I did once slip her a shit ton of acid stashed in a blueberry brownie before a debate, but frankly I couldn’t tell the difference. After that I stuck to laxatives in the brownies, but she still ended up wining that one. 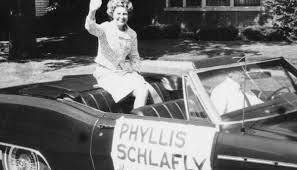 She was a nasty, hypocritical, unchristian old baggage – she believed in jobs and power for her, but not for other women, that there was no rape inside marriage, that Anthony Kennedy should have been impeached for abolishing the death penalty for minors, and that all Muslims should be banned from the armed forces and political office.

She endorsed Donald Trump, but that might just have been because she was bats at the end.

She was a prude whose hatred of sex and those who dared to have it – in particular those who she thought God had cursed with disease for having it – somehow made her the respectable face of a campaign to stigmatise people with HIV and AIDS (and not just the gays) which gave the Reagan administration cover to ignore the AIDS crisis, held back AIDS education and funding of AIDS research for years, and therefore directly or indirectly resulted in the deaths of hundreds of thousands of people and the infection of twice that many again.

Phyllis Schlafly was a cruel woman – the kind of woman who, in November 1985, as hundreds, and soon thousands of people were dying every month, could write:

… At least 10% of AIDS sufferers are innocent, involuntary victims such as babies.

Male homosexuals are the principal victims of AIDS but they are also the principal carriers of the contagion. The public health problem has been spread throughout our country by an identifiable class of people who engage in a bizarre risk taking recreation: frequent promiscuous (often anonymous) homosexual sex. …

Has the homosexual lobby really persuaded us that their right to engage in perverted, promiscuous sex takes precedence over the rights of the rest of us to have uncontaminated blood available for medical emergencies?

The New York school system asserts the right of a child who has AIDS to attend school and thereby run the risk of exposing healthy children. Where are the rights of the healthy children and their tens of thousands of protesting parents? …

Other proposals include making it a felony for homosexuals and intravenous drug users to donate blood; quarantining AIDS victims; barring children with AIDS from public schools; prohibiting anyone with AIDS from working in the health-care industry; assuring protection for health-care workers against AIDS patients; requiring a test which detects AIDS antibodies for workers in certain occupations like food handling.

The whole thing is posted after the fold.

Phyllis Schlafly was, in short, the kind of person who sees a kiddie with a fatal disease and wants to kick them out of school, lock them away from everyone else, and prevent them from ever getting a job or going to a hospital when they are sick.

In memory then of Phyllis, who is still dead, I give you this (via Queerty) – a sweet little story about a deaf Lyft driver, his passengers, young love and, probably, perverted homosexual sex – because it makes me feel all mooshy inside that young gay/trans/whatevers are out there making sweet little love stories like this, and because the mere existence of this video would have fucked up Phyllis’s day completely.

Although probably not as much as dying did.

Cheers, you old trout. Say hello to Fat Tony for me before the little devils stick their toasty hot pitchforks into you.

END_OF_DOCUMENT_TOKEN_TO_BE_REPLACED

So, I’m serving seared tuna (which has been marinating in teriyaki and rice wine for a while) with a mint, coriander, savoy cabbage and bean sprout salad, drizzled with argan oil and lime juice

And I’m stuck as to what cocktail to serve with it on a warmish spring evening. Mai tais to start, but then I need something to go with the fish. I’m thinking gimlets or white ladies at the moment. 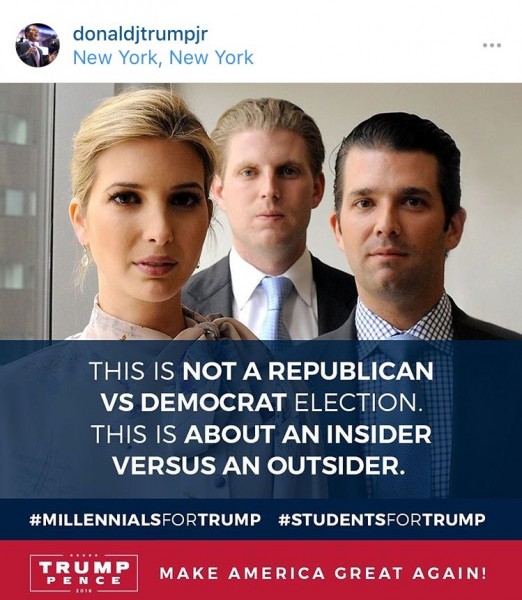