You are here: Home / Archives for Civil Rights / LGBTQ Rights / The Gay Enemy Within

The Gay Enemy Within

…which is all well and good, but it still rankles just a bit.

I can usually make it through days ending in ‘y’ without having to come out to somebody, but it definitely happens more than once a year. As a cis white man with no behaviors that scream ‘gay!’ to the uninitiated, I’m not as likely to experience anti-LGBT prejudice as most community members, but I do have to tell people I’m gay an awful lot.

I’m not saying that this is an actual burden, relatively speaking. But I’m definitely not alone in being a little annoyed by the official annual reminder that it’s not my world, I just live in it. It can be so stressful that, when I was in college, the observance was delayed by two weeks, so that people could get settled into the semester before having to deal with it.

National Coming Out Day began in 1988, on the premise that visibility is good, which is true. Many did not know that they knew an LGBT person. This is the case for fewer people nowadays, but still too many. So, in the spirit of the holiday, I will get the ball rolling: Hi! I’m a gay man! (More of a Kinsey five, but who’s counting.)

(h/t Sister Golden Bear, who reminded me to write something!)

In other gay news, bonus Elizabeth Warren below the fold.

.@ewarren responding to the idea that marriage is between one man and one woman:

“Well I’m gonna assume it’s a guy who said that. And I’m gonna say then just marry one woman… assuming you can find one.”

The crowd is beside itself. ??? pic.twitter.com/IBaIm8Pp88

Slay, queen, etc., in the parlance of our times.

END_OF_DOCUMENT_TOKEN_TO_BE_REPLACED 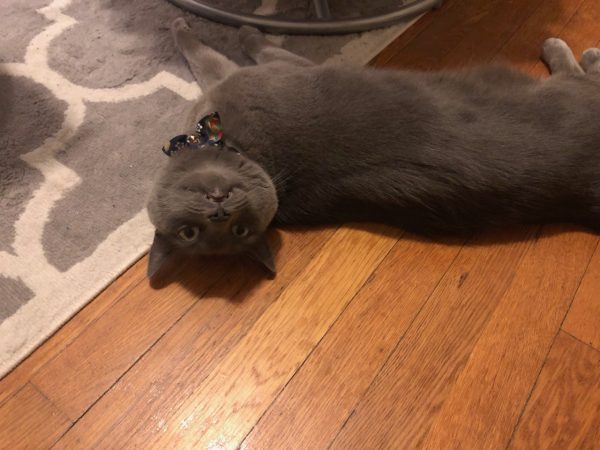 It’s been a smidge hot lately; that’s how much energy Samwise could muster for greeting me after brunch. We keep the AC on in the bedroom, but I guess he decided the muggy living room was more his speed.

Happy Pride! How are you all? Got any Netflix/Hulu/Prime recommendations? I’ve been watching Neon Genesis Evangelion, which holds up surprisingly well.

Parting observation: Marianne Williamson has suddenly taken on a huge memetic presence in my Twitter feed. One of my Very Online friends even bought her shirt. You know, ironically.

When Gay Twitter finds out that Laura Dern was once Marianne Williamson’s roommate…. it’s over…

END_OF_DOCUMENT_TOKEN_TO_BE_REPLACED

Try the shoe department. You'll probably want something with thick soles since it seems like you have pretty thin skin.

sorry they sold out of the ones you wanted pic.twitter.com/T3dRKD7OEo

Sir, I believe you belong in a Wal Mart.

END_OF_DOCUMENT_TOKEN_TO_BE_REPLACED

As many of you already know, I’m a prolific commenter here. (For those who didn’t know that, now you do.) Recent-ish-ly, I’ve been working with Alain on various improvements to the site. These efforts kept hitting the same snag: developing anything for a system you don’t have access to is terrible. So Alain gave me the keys to the production server. Somebody had the bright idea to give me the keys to WordPress too, so here we are.

I know I’m supposed to say something snarky here, but I really do think it’s kind of an honor, so hey, thanks!

Now. Before you complain about the site in the comments, let me say that we are aware there are many issues. We might even be aware of yours! But BJ is nobody’s full-time job, so, well, you know how triage works.

As for posting, I’m going to keep that light. As Alain mentioned, I’d like to start a twice-monthly series where we can all talk about good books to read. I may do the first one on Sunday. If there’s interest, I may also start a feature where we can talk about video games. Let me know. Finally, I may jump in with a west coast late night open thread on evenings where there’s a need.

Bio and pet pics below the fold…

I’m a web developer in San Francisco with an enormous cat named Samwise and a husband named something else. Generationally, I’m an early millennial, which basically means I’m a digital native but I don’t understand Snapchat. I am on Twitter though, so if that’s your thing, feel free to follow me. It’s mostly art and nerd humor, programming stuff, and the expected politics of a neoliberal shill.

(Speaking of my Twitter account, my identity is obviously not a secret, but my name is very rare and I ask that you not use it here in text.)

I am also apparently a writer, in the sense that somebody recently paid me for a short story, which comes out next Friday. I’m also working on my third novel, which is the first good one I’ve written. 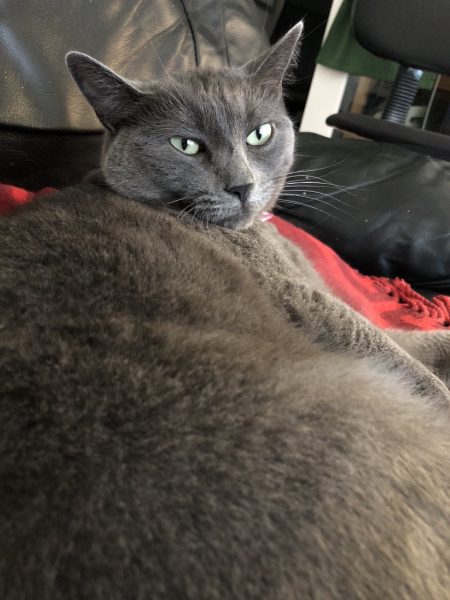 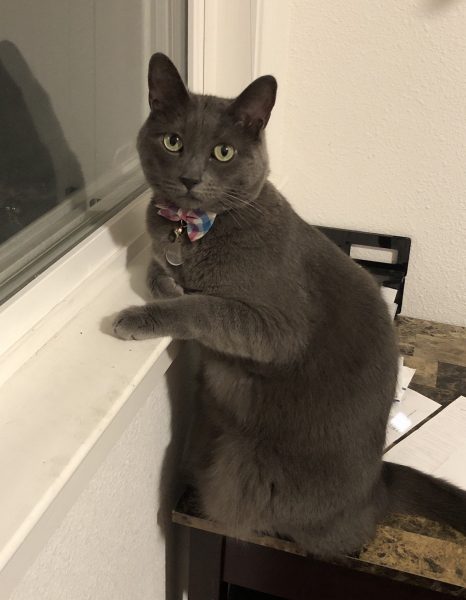 END_OF_DOCUMENT_TOKEN_TO_BE_REPLACED

Two same-sex couples (so far) have been issued marriage licenses in Rowan County, Kentucky, US America, after the martyr for Jesus clerk was thrown in the hoosegow yesterday.  Here’s a taste of the welcome they got:

When the couple got inside the office Friday, a man harassed them, saying “More sodomites getting married?”
[…] In a heated exchange, Davis’ supporters yelled, “I’m telling you the truth because I love you,” while opponents yelled back, “Jesus loves everyone.”

Since I was raised Catholic and therefore know nothing of the Bible, I’ll leave it to the real Christians in the audience to find the verse where Jesus said, “I show how much I love you by telling you the truth about how much I hate you”.

The highlight of this whole shitshow, for me at least, was this “you know who else jailed county clerks who failed to do their job?” quote from our martyr’s lawyer:

“Does that mean that if you’re Christian, don’t apply here; if you’re a Jew, you gotta get — what happened in Nazi Germany, what happened there first, they removed the Jews from government public employment, then they stopped patronizing them in their private businesses, then they continued to stigmatize them, then they were the ‘problems,’ then they killed them,” Staver said. “The fact of the matter is, she has a right to this employment and you don’t lose your constitutional liberties just because you are employed by the government.”

If I were philosopher-king, the first first thing I would do is ban all WWII analogies, including all “Munich” and “Chamberlain” references. They’re like songs by Air Supply or “screw in a lightbulb” jokes — everyone has heard enough of them for this lifetime. The second first thing I would do is fire all the “Christians” who won’t do their fucking jobs because they think Jesus is whispering in their ear.

END_OF_DOCUMENT_TOKEN_TO_BE_REPLACED

Meanwhile, the saga of the quixotic enigma that is the Rowan County, Kentucky Clerk’s Office continues.

A federal judge on Wednesday ordered Rowan County Clerk Kim Davis to resume issuing marriage licenses despite her religious objection to same-sex marriage, but Davis quickly filed an appeal and continued her refusal to issue licenses.

Davis will ask Bunning to stay his injunction while she appeals it to the 6th Circuit U.S. Court of Appeals, said her attorney, Roger Gannam.

“Kim Davis is resolute in vindicating her rights,” said Gannam, senior litigation counsel at Liberty Counsel, a religious advocacy group. “Fundamentally, we disagree with this order because the government should never be able to compel a person to violate their sincerely held religious beliefs.”

The martyr-splosion that the GOP wants here won’t happen until Davis is fired or otherwise removed from office, and the instant that happens, it’s PERSECUTION OF CHRISTIANS BY GAY LIONS or something, not to mention an immediate headache for AG Jack Conway, who is busy both A) suing the hell out of the EPA to show he’s tough on that Obama fella, and B) trying to actually save the state from Matt Bevin as governor.
Anyhow, something’s got to give here, the county hasn’t issued any marriage licenses since the SCOTUS ruling came down in June, so we’ll see what current Gov. Dinosaur Steve Beshear decides to do about it. I still stand by my prediction that this case is destined for SCOTUS somehow.

END_OF_DOCUMENT_TOKEN_TO_BE_REPLACED

Louisiana’s version of Indiana’s now infamous”Religious Freedom” bill has died screaming in legislative committee, so Gov. Bobby Jindal is just going to declare it law anyway because EAGLE and MURICA.

Proponents of the bill, including sponsor Rep. Mike Johnson (R), claimed that it had nothing to do with enabling discrimination against LGBT people. Nevertheless, he specifically cited the cases of florists, bakers, and event venues that have been punished in other states for refusing to serve same-sex couples as the reason the bill was necessary. Stephen Sabludowsky of Bayou Buzz highlighted some of other examples of discrimination that the provision seems to open the door to. “A doctor working at a state institution could not be fired by the state if the doctor refused to treat a same-sex couple,” he explained, nor could the state “take action against a teacher who refused to visit with the same-sex parents of a student.”

If your argument is literally “Well, we can’t allow the state to do anything about hating the gays because God,” then good luck winning the White House in 2016. Not that Bobby here had a chance in hell anyway, but he went ahead and made good on the threat late yesterday.

Please note that just a few months ago, Jindal attacked President Obama for issuing executive orders on immigration, calling the president “lawless”.  I guess that makes Jindal just as bad, but nobody in Republicanland will point that out.

No wonder that Jindal’s approval ratings in Louisiana are tanking hard, he’s down to that magic number of 27%, which actually puts him below President Obama in the state.

Funny how that works.