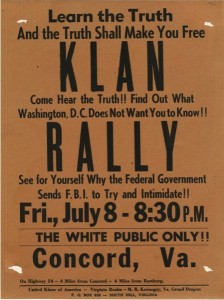 Apparently the KKK is trying to increase their membership, and they’re using Obama’s second term to do it. At first it doesn’t make a whole lot of sense since the very fact of Obama’s presidency means we’re living in a post-racial society, so we don’t need the KKK.

Then again, it’s fairly apparent that Obama plans to enslave whitey in his second term, so you better rise up against your Negro oppressors before I pick one of you to be my butler.

END_OF_DOCUMENT_TOKEN_TO_BE_REPLACED

A guy in South Carolina named Bob Cramer (who is totally not racist, by the way) is selling t-shirts featuring that image of President Obama dressed like a witchdoctor with a bone through his nose. You know the one — it was all the rage during the Death Panels Will Kill Us All era of the Obama presidency.

Bob has been told that it’s racist, but it’s not, he says. It’s political, he says. Besides, no black people have said shit to him about it, so… no fuss, no muss.

END_OF_DOCUMENT_TOKEN_TO_BE_REPLACED

What is with gun nuts drawing crazy comparisons between guns and black people stuff?

First the NRA ex-president claimed that people are racist against guns. Then Ted Nugent claimed that gun owners are the new Rosa Parks. Now, Larry Ward, the organizer of Gun Appreciation Day, is claiming that slavery might never have happened if black people — excuse me — “African-Americans” had owned guns.

The irony of how Africans became African-Americans is, apparently, lost on crazy white folks.

Jesus beat me about the head and chest with the wheel.

END_OF_DOCUMENT_TOKEN_TO_BE_REPLACED

LaRue Ford was forced to spend the holidays in Berrien County jail in Michigan because Judge Dennis Wiley saw fit to hold her in contempt of court (and, later, to revoke her $5000 bond). Why?

Because she cursed under her breath in the Secretary of State clerk’s office.

asiangrrlMN will be along (at ABLC) forthwith to provide the appropriate profanity-laced tirade that this story deserves, but I have been yammering about this on Twitter and wanted to post it so people will know what the hell it is I’m yammering about.

Oh, and if anyone can explain to me how this judge could hold LaRue Ford in contempt of court for muttering “fuck this shit” under her breath at the clerk’s office, I would love to hear it.

***Notably, Benton Harbor is in Berrien County. If you’ve been following the emergency manager law shenanigans that Chris Savage of Eclectablog has been covering for the past year, you likely understand why this is relevant.

END_OF_DOCUMENT_TOKEN_TO_BE_REPLACED 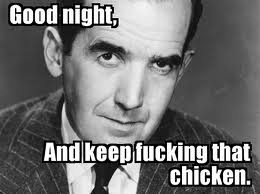 Members of the Electoral College formally cast their ballots for the 2012 presidential election in traditional ceremonies across the country today. In Arizona, three electoral voters — including state GOP Chairman Tom Morrissey — took the opportunity to question President Obama’s birth certificate as they cast their ballot for Mitt Romney, the AP reports.

“I’m not satisfied with what I’ve seen,” Morrissey said, according to a local radio station. “I think for somebody in the president’s position to not have produced a document that looks more legitimate, I have a problem with that.”

Actually? Better get a new chicken, because y’all done fucked this one to death.

As you may recall, Tom Morrissey was diagnosed with Obama Derangement Syndrome long ago, so this isn’t new. (I wrote about Morrissey here.) Still, its pretty goddamn embarrassing.

These fools are just yelling at the sky at this point. They need to sit down and shut up. The election is over. Nobody has time for this birther crap anymore.

Seriously. Shut it down.

END_OF_DOCUMENT_TOKEN_TO_BE_REPLACED

From Matt Viser, at the Boston Globe:

WASHINGTON – Mitt Romney and President Obama dined together at the White House on Thursday afternoon, attempting to heal campaign wounds over a lunch of white turkey chili and Southwestern grilled chicken salad….

According to the White House, the two former rivals also “pledged to stay in touch, particularly if opportunities to work together on shared interests arise in the future.”…

That’s quality MBA-speak, that is. Or, as Paul Constant puts it: “‘Let’s stay in touch, particularly if opportunities to work together on shared interests arise in the future’ is the new ‘fuck you, you fucking fuck.'”

… Romney was driven to the side door of the White House in a black Lincoln Navigator, but he opened his own car door and stepped out alone. He was within eyesight of a stage being built for the inauguration, but it was for President Obama’s, not his…

Don’t forget the chicken salad. President Obama is not at all the sort of man to refer to that old marketing chestnut about chickenshit & chicken salad… out loud.

…The two were together about 70 minutes, and both sides tried to keep low any expectations of news. Romney entered a side door, with photographers using long lenses to capture him in the brief seconds he was visible.

Several minutes later, White House press secretary Jay Carney began a briefing at which he was asked whether there would be a joint appearance by the two men.

Meanwhile, from the other end of the social scale, another Romney defector, via NYMag‘s Daily Intel:

… 30-year-old Eric Hartsburg of Indiana is removing the Romney/Ryan logo tattood on his face. Hartsburg had vowed to keep the tattoo, even after Romney lost and he received an offer to have it removed for free, but Romney’s “gifts” remark changed his mind. “It stands not only for a losing campaign but for a sore loser,” Hartsburg said. “He’s pretty shameful as far as I’m concerned, man. There’s no dignity in blaming somebody else for buying votes and paying off people. I can’t get behind that or stay behind that.” …

END_OF_DOCUMENT_TOKEN_TO_BE_REPLACED 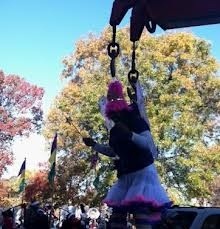 If you are unfamiliar with the Twitter account, @yesyoureracist, you must check it out. The idea behind it is to pick out tweets from various ign’ant ass people, and to reassure them that despite their protestations to the contrary, they are, in fact, racist.

Yes you are. RT @naomisharif: I’m not racist….but I don’t like Chinese people

Yes you are RT @enjoycaroline Three black kids are in the hallway of my apartment building. i’m not racist but i think they’re here to steal

Piggybacking on that idea, I think someone should create a Twitter account “dear media: yes, that’s racist,” [working title] because watching the media attempt to avoid calling racist shit “racist shit” is starting to grate on my last nerve. There are certain things that are blatantly in-your-face racist, and when those things happen, they should be called blatantly in-your-face racist or holy-shit-that’s-racist, and not “some-call-it-racist,” or “some-say-it’s-racist” or other mealy-mouthed nonsense.

For example, when a radio station’s Christmas Parade float consists of dragging a black guy behind a tow truck while some asshole shock jock cracks jokes about a black Christmas fairy turning “crackers” into Beyonce, for the love of blog, call it racist:

G-105 apologizes for parade float that some called racist

Neither the G105 “Showgram” nor its host, Bob Dumas, are strangers to controversy. The popular local morning radio show is known for a range of stunts over the years that follow a familiar pattern: the hosts enrage some of the local citizenry, Showgram fans rally to their defense, the station gets free publicity and then apologizes.

This week, the Showgram is under fire for its float in last Saturday’s Raleigh WRAL Christmas Parade. The entry featured a black man dressed in a skirt with fairy wings, strapped to a harness that was suspended from the back of a tow truck. Dumas, riding on the float, described the scene to parade goers as “Tyrone the Black Christmas Fairy” who was going to turn “crackers” into Beyonce.

Many people watching the parade or reading accounts of it later called the image inappropriate and took to Facebook and Twitter.

“I cannot believe that this happened,” Raleigh Mayor Nancy McFarlane wrote on Facebook to a concerned citizen. “Raleigh will not tolerate racism or anything that comes remotely close. This parade is a Raleigh tradition that includes everyone and should be treated as such.”

Michael “Breeze” Rackoff, who up until late last week was the director of the Showgram, said he questioned the concept of the Christmas fairy when Dumas first proposed it in a staff meeting. The man suspended from the truck, Tyrone Dunston, is not a Showgram employee but is a longtime fan of the show.

Rackoff thought the show’s parade entry should have had a different motif.

“It was originally going to be a military theme, up until the very last week,” Rackoff said Wednesday. “There was also that idea of Tyrone hanging from a tow truck as a Christmas fairy, and I specifically remember looking at several people and saying, ‘Ah, isn’t that kind of racially insensitive to drag a black man behind a tow truck, be it in good spirits or not?’

“Obviously, no one thought it was an issue,” he said.