You are here: Home / Archives for Civil Rights / Women's Rights / A Woman's Place Is In The House

A Woman's Place Is In The House

WASHINGTON (AP) — Nancy Pelosi, who's likely to be the next House speaker, says Democrats running the chamber next year will make initial moves toward getting President Donald Trump's tax returns.

Nancy Pelosi Will Quit Being Speaker Soon As The Rest Of Y'all Dead https://t.co/vgw6Y9yB6w via @EvanHurst

… OK, we are saying a hyperbole, but she promises she will quit being speaker once she is 83. (83!) She is 78 right now, so basically she is saying she’ll be the boss of two more Congresses and then she will hand her gavel to somebody who’s ready on day one like a common Nancy Pelosi. (Presumably, this gives her a chance to finish grooming whomever is best suited to take her spot.)

‘Her skills are real’: How Pelosi put down a Democratic rebellion in bid for speaker Via @mikedebonis and @costareports https://t.co/NMHUdUD7Ok

… Pelosi, 78, clinched the votes she needed late Wednesday after announcing support for a term limits deal that would allow her to serve as speaker for another four years. Seven dissident Democrats immediately said they would support her, paving the way for her election Jan. 3.

“The fact that she’s been speaker and will be speaker again is testimony to her enormous ability, her toughness, her off-the-charts work ethic, and her ability to interact with people and negotiate with people and come to a conclusion,” he said. “She works harder than any human being I’ve ever known.”…

You won’t have any sustained success in politics if you’re only looking out for yourself, and you can’t be trusted by your ostensible allies; e.g., Seth Moulton:https://t.co/P2zxAwsExm

… The six-week battle over the speaker’s chair was vintage Pelosi. Relying on a mix of pressure tactics she’d sharpened during three decades in Congress, Pelosi waited out her critics, wore them down and then threw them a bone as they looked for a way out.

The group of anti-Pelosi rebels faced an uphill battle from the start. Pelosi maintained immense support within the caucus, and she had powerful allies outside Congress whipping for her. And opposition from the massive incoming class of freshmen wasn’t as strong as many had thought.

The rebels, meanwhile, wanted Pelosi gone — but that’s where their agreement ended. Her critics had different motivations for opposing her and different strategies for dethroning her. That discord ultimately weakened their hand during negotiations.

“People started to get cold feet and decided they didn’t want to do it. They were under a lot of pressure,” said a regretful Rep. Kurt Schrader (D-Ore.), a Pelosi critic who still plans to oppose her on the House floor. “The goal all along — until a week or two — was to get a new, younger generation speaker of the House that represented the country and the future of our party. That did not happen.”

The rebels did win a victory — just not the one they sought. Pelosi will be in the speaker’s chair in January, to the chagrin of most of Perlmutter’s group. She remains the face of the party and the new House Democratic majority and will become the most important Democrat in the nation, at least until the party anoints a presidential nominee…

Rep. Moulton is not a stupid person (he’d be a perfectly fine New England moderate Republican, if the breed still existed), so it is to be hoped he’s learned some valuable lessons from his premature stunt-challenge. (And soon, because right now there’s support for a primary challenge in 2020.) Nancy Pelosi is ‘Nancy Smash’ because she’s remembered the basic rule for success: Never promise what you can’t deliver, and always deliver what you’ve promised.

No wonder the Squatter-in-Chief is having a bad weekend…

'I think the Oval Office is an evidence-free zone.' — Rep. Nancy Pelosi laughed off Trump's claim that he's already gotten Mexico to pay for the border wall pic.twitter.com/moh1AVLiUW

Last night the image of @NancyPelosi calmly walking away after blowing up Trump's plan was projected on the San Francisco Federal Building pic.twitter.com/QOdHePTNPh

END_OF_DOCUMENT_TOKEN_TO_BE_REPLACED

This will warm the cockles of your heart. Start at about 6 minutes to avoid Trump’s bloviating.

It looks like Pelosi and Schumer did some serious preparation for this meeting. They handled it brilliantly and walked Trump right into owning any government shutdown that may occur.

END_OF_DOCUMENT_TOKEN_TO_BE_REPLACED

For the United States of America. pic.twitter.com/sQUkMH4Urx

Meanwhile, across the aisle…

The Dow is not only down for the year but also down since the 2017 tax cuts.

Don't blame me, I don't make the rules pic.twitter.com/Ld1lYxzwkh

For the sake of my extremely modest 401(k), I take comfort in WaPo economist Jared Bernstein’s advice:

… So: tune out the market volatility, keep on eye not just on recession probabilities but on slowing growth, watch oil and its impact on real wages (+) and investment (-), and for Keynes’s sake, don’t listen to Trump!

END_OF_DOCUMENT_TOKEN_TO_BE_REPLACED

Possibly the most important Democratic political message of the moment: 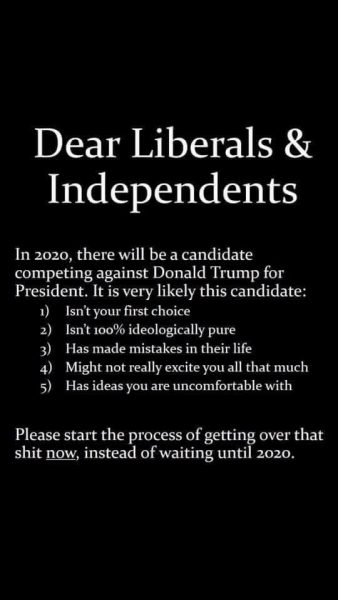 Historic: The chairs of the DGA, DSCC, DCCC and DLCC are all women now. It's a fitting coda to the Year of the Woman. I interviewed them this weekend for the Daily 202: https://t.co/ZyC8EOC2sJ

To a large degree, Trump reached the W.H. without a thorough vetting. His taxes, his biz deals, and his mob ties received little scrutiny in 2016. His admin's scandals have been mostly ignored by Republicans. Now Dems have an opportun­ity to remedy this. https://t.co/cHbOSJhKZn

And (once again) a glimmer at the end of the tunnel…

END_OF_DOCUMENT_TOKEN_TO_BE_REPLACED

House Democrats’ 1st bill is a good-government package to limit big money in politics, make it easier for citizens to vote and require presidents to disclose their tax returns. https://t.co/cwpOJ1Ys4S 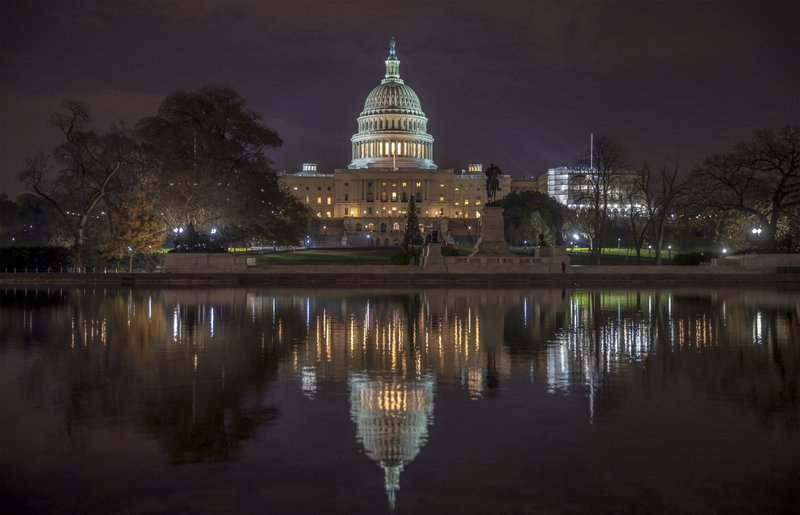 The legislation, called H.R. 1, sets the tone for Democrats as they take the majority in January.

The bill would create national voter registration and expand access to early, online voting. It would increase federal support for state voter systems, including paper ballots to prevent fraud.

END_OF_DOCUMENT_TOKEN_TO_BE_REPLACED

I keep thinking about this interview between Nancy Pelosi and Rebecca @rtraister. More specifically, the very last part. https://t.co/ByX9GnuzHq pic.twitter.com/jT8w5Y9UfQ

Earlier this month, Americans went to the polls and sent a powerful message: The election not only was a resounding verdict against Republicans’ assault on Americans’ health care and wages, but it also was a vote to rescue our broken democracy.

In the face of a torrent of special-interest dark money, partisan gerrymandering and devious vote-suppression schemes, voters elected a House Democratic majority determined to bring real change to restore our democracy.

During the campaign, Democrats declared unequivocally that we would clean up corruption to make Washington work for the people. We pledged to reduce the role of money in politics, to restore ethics and integrity to government, and to strengthen voting laws.

We now have our marching orders. The new Democratic House is ready to deliver with H.R. 1: a bold reform package to restore the promise of our democracy — a government of, by and for the people.

First, let’s end the dominance of money in politics…

Next, let’s make sure that when public servants get to Washington, they serve the public. Restoring the public’s trust means closing the revolving door between government and private industries, and imposing strong new ethics laws to stop officials from using their public office for personal gain…

Finally, let’s make it easier, not harder, to vote… We must renew the Voting Rights Act to protect every citizen’s access to the ballot box and restore the vital safeguard of pre-clearance requirements for areas with a history of voter suppression. We will promote national automatic voter registration, bolster our critical election infrastructure against foreign attackers, and put an end to partisan gerrymandering once and for all by establishing federal guidelines to outlaw the practice…

Most vampires say Buffy should not be a vampire slayer. https://t.co/rDfFF3eiUk

END_OF_DOCUMENT_TOKEN_TO_BE_REPLACED

There's something poetic about the fact that Pelosi is winning back the speakership by demonstrating that she's the best damn legislative strategist alive today.

I am a conservative Republican, so please take that as an admission against interest as I patiently explain to you that Pelosi will go down in history as one of the most effective House leaders in the modern history of the Republic given what she has accomplished for progressives https://t.co/gE5MpCnghW

In an age of extreme polarization (and hence wild swings from cycle-to-cycle in the House), effective leadership means wrangling votes and instilling obedience and unity within fractious ranks. The Democrats under Pelosi have been nearly unparalleled at this, the GOP…welp.

If you cannot respect that level of persuasion/compulsion, even as an ideological enemy, just as a model to be emulated if nothing else, then I would submit you're not being clear-eyed about politics.

The job of House Speaker isn't to represent your party on TV. It's to outmaneuver your foes in Congress. Nancy Pelosi is better at that than any Democratic in living memory. This week she proved it yet again https://t.co/3d0h1zUf7T

All the challenges to Leader Pelosi are coming from her right, in an apparent effort to make the party even more conservative and bent toward corporate interests.

Hard pass. So long as Leader Pelosi remains the most progressive candidate for Speaker, she can count on my support. https://t.co/yNVa8IorWY

9 Dems are choosing to hold the entire 220+ caucus hostage if we don’t accept their GOP-friendly rules that will hamstring healthcare efforts from the get-go.

People sent us here to get things done, not “negotiate” with an admin that jails children and guts people’s healthcare. https://t.co/ih8ygftjHo

She keeps taking notes like this, and she’ll do just fine, that Ocasio-Cortez person.