You are here: Home / Archives for 2024 Elections

Why are Democrats in trouble in blue states? Assume the headlines are correct and a red wave is coming. I’m trying to figure out why even in blue states they are in trouble. And let’s be polite and not scream about the polls being wrong. Assume they are right. Why are they right? What are Dems in blue states doing wrong?

END_OF_DOCUMENT_TOKEN_TO_BE_REPLACED

We didn’t watch the DeSantis – Crist debate last night. We banked our votes for Crist via return mail a while back, and we heard enough of DeSantis’s droning, adenoidal voice to last several lifetimes before and after the recent hurricane, so we took a hard pass on hearing more of it.

Also, the race depresses me because I suspect Crist will come up short again in Florida, even if the party does better than expected elsewhere. (Don’t @ me — it’s been my lived experience in gubernatorial elections for this entire fucking century.)

All that said, I did watch a clip or two of the debate on Twitter and read takes from several frustrated theater critics masquerading as political pundits, and outside the echo chambers, it’s obvious why DeSantis only agreed to one debate: he sucks at debating. I mean, look at this asshole:

Crist: “Yes or no, Ron. Will you serve a full four year term if you’re reelected governor of Florida? It’s not a tough question. It’s a fair question. He won’t tell ya.”

I’ve seen that animatronic glitch before — it appears whenever DeSantis wanders outside the con-media bubble and gets asked a tough question. He’s a thin-skinned prick, as is his bloated orange meat-sack mentor, but DeSantis lacks Tangerine Baal’s repertoire of dumb schoolyard taunts, so he glitches out.

Imagine what a Chris Christie (or even the original orange fart cloud himself) would do with that on a GOP presidential primary debate stage.  So, maybe those of you who think DeSantis is a Beltway pundit flavor of the month who will flop on the national stage like Scott Walker or Tim Pawlenty are right. Here’s hoping.

To follow up on yesterday’s school shooting in St. Louis, a 16-year-old girl was killed, as was 61-year-old health and PE teacher Jean Kuczka. The teacher’s daughter said she was told her mom stepped in front of the gunman to protect the kids.

Such a senseless loss. I think it’s understandable that people tend to focus on the children who die in these horrible mass shootings — children have their whole lives ahead of them, and the little ones are so innocent. But we should take time to grieve the slaughter of our educators too.

In the Post-Dispatch account, Ms. Kuczka sounds like a wonderful person and a dedicated teacher. She had a husband and five kids, and her last child had recently fledged the nest. Her daughter said Ms. Kuczka was looking forward to retirement.

Teachers almost always die in these attacks — while filling a difficult and necessary role, often for low pay and poor working conditions that now include getting screamed at and having their character impugned by hard-right political operatives pretending to be concerned parents.

Would a “Moms for Liberty” operative take a bullet for a kid? I think they’d be more likely to use a child as a human shield.

Rest in peace, Ms. Kuczka. You deserved so much better.

END_OF_DOCUMENT_TOKEN_TO_BE_REPLACED

I simply can not and will not read, link, or share any of these fucking clickbait articles predicting doom and gloom for the Democrats.

I fucking refuse. Go out and vote. The fucking end.

END_OF_DOCUMENT_TOKEN_TO_BE_REPLACED

I don’t know if this is a Florida quirk, or maybe it’s a thing in all states where Democrats don’t control the state government: our local daily newspapers sometimes scold the state and/or national Democratic Party and urge it to fix things to save us all from Republicans. I’ve written about it here before when the Tampa Bay Times did this, with some justification, as I wrote at the time.

This week, it’s the Miami Herald‘s editorial board, which is begging the party to figure out how to stop Republicans from consolidating the support of religious people and replacing democracy with a white Christian nationalist theocracy. The op-ed starts off by affirming that the U.S. is a secular nation and criticizing DeSantis’s use of Christian nationalism as a political weapon, then urges Dems to do more to counter that GOP strategy by appealing to moderate religious folks. Some excerpts:

It doesn’t seem like a coincidence that, at the same time the GOP ramps up its rhetoric on religious and culture wars, the party makes gains with Hispanic and non-white voters in places like Miami-Dade…Yes, Democrats appear in some church pulpits to rally their base during election season, and high-profile politicians like President Biden, who’s Catholic, have been open about their faith. But given the onslaught of religious talk in Florida — and the use of government to promote one conservative religious view — Democrats must find a better way to acknowledge the importance of religion and spirituality in people’s lives without crossing the line into proselytizing…

DeSantis and other conservative leaders are trying to erode the separation of church and state, a concept Thomas Jefferson wrote of in an 1802 letter and cited in landmark court rulings. Florida taxpayers are now paying for training sessions for public school teachers that deny the Founding Fathers wanted that separation. The Founding Fathers had very nuanced views about religion, as the Herald Editorial Board previously explained.

DeSantis is not alone in this. The majority-conservative U.S. Supreme Court chipped away at that wall of separation with a series of recent rulings. With Evangelicals proving to be such an important and faithful voting bloc for Trump, there’s incentive for our ambitious and savvy governor to continue to court them.

Whereas the governor’s Christian nationalist shtick only separates us, the Democrats need to counter it more boldly and bring back into their tent voters who feel that, on the issues of religion and faith, the party has nothing to say to them.

After reading it twice, I’m still not sure exactly what they want Democrats to do. Almost 90% of the people in Congress are Christians, which is far more than Christianity’s share of the general public. Every single president ever elected at least claimed to be a Christian, and I can’t recall either party ever nominating a presidential candidate who didn’t identify as a Christian.

Do you think either party would nominate an out atheist or agnostic for president? I’d like to think the Dems would, but I don’t know, even though about a quarter of Americans are unaffiliated. Based on this, my guess is that anyone who thinks the Democratic Party is hostile to religion is already a Republican and unlikely to be lured to the Dems by more professions of a candidate’s faith or acknowledgement of religion’s role in daily life.

In my opinion, the appropriate thing to say on the issue is that religious liberty means not imposing one group’s views on everyone else, and this is something most Democratic candidates already say. So do our founding documents, for what it’s worth, which is apparently nothing to the Republican religious fanatics on the Supreme Court.

One fruitful angle Dems here in Florida could perhaps exploit is the evangelical griftopia DeSantis and the Republican statehouse have built, where they funnel public education money to outfits like Michigan’s extreme right-wing Hillsdale College for charter schools and teacher training. Given a chance, Florida Republicans will shovel even more taxpayer dollars to hard-right “crisis pregnancy center” outfits as they impose more restrictions on reproductive health.

Anyhoo, the Herald may be barking up the wrong tree here. DeSantis is open about who and what he is, and Democrats are offering an alternative for voters who want to get off the autocracy expressway. It’s up to voters to take that exit. Or not.

END_OF_DOCUMENT_TOKEN_TO_BE_REPLACED

Rarely has a snapshot of Memeorandum so starkly depicted the current state of play in U.S. politics: 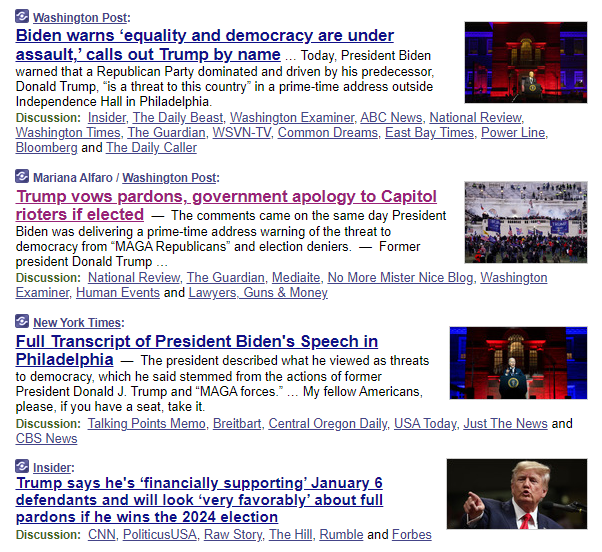 Trump couldn’t have more efficiently underscored the righteousness of Biden’s accusations if he had explicitly set out to do so. I assume that last item about Trump financially supporting the insurrectionists is a bald-faced lie since Trump doesn’t even support his blubbery orange self. But it’s unambiguous confirmation that he supports the violent overthrow of the democratically elected government.

The mister and I watched Biden’s speech last night and found ourselves cheering at several points, which is unusual for such a reticent pair of odd ducks. My inner theater critic is generally not a fan of Biden’s anger-bear mode; empathy is his métier, so sometimes anger can sound strained and cloud-shouty coming from Biden. But last night, it sounded genuine and righteous and timely.

The usual suspects sank into the usual fainting couches, but to quote a great man, “Fuck ’em!” And those meeping that Biden promised to be a uniter should understand that he is a uniter — he’s uniting people who support democracy against the fascists who are trying to destroy it.

Also, this headline makes me want to break shit:

Sweet weeping Jeebus. How about this instead:

Opinion: How clickbait media hacks can avoid burning Cassandra at the stake for telling the goddamn truth next time

As Biden said, “it is within our power to stop this assault on democracy.”  Trump is certainly doing his part to demonstrate the urgency of the situation. The Beltway media is focused solely on theater criticism. All that remains is to see whether normie America will wake up to the peril and act accordingly.

END_OF_DOCUMENT_TOKEN_TO_BE_REPLACED

One of the January 6th insurrectionists was sentenced to 10 years in prison today. From NBC News:

WASHINGTON — A retired New York City Police Department officer who was convicted of several felonies for attacking a D.C. cop with a flag pole on Jan. 6 and then tackling the officer to the ground and attempting to rip off his gas mask was sentenced to 10 years in federal prison on Thursday. Thomas Webster was sentenced by Judge Amit P. Mehta to the longest sentence yet in a Jan. 6 case.

Former president Donald Trump said he would issue full pardons and a government apology to rioters who stormed the U.S. Capitol on Jan. 6, 2021, and violently attacked law enforcement to stop the democratic transfer of power.

“I mean full pardons with an apology to many,” he told conservative radio host Wendy Bell on Thursday morning. Such a move would be contingent on Trump running and winning the 2024 presidential election.

Do you reckon President Biden’s speechwriters are editing the draft of the speech on saving democracy right now? Good lord, these people are nuts.

END_OF_DOCUMENT_TOKEN_TO_BE_REPLACED

I've seen enough: in a huge victory for the pro-choice side, the Kansas constitutional amendment to remove protections of abortion rights fails.

It's possible the margin for "No" in red Kansas will be a resounding double digits, a sign of just how unpopular overturning Roe v. Wade is nationally.