I gotta say, it’s getting bitter out there in the healthy drink world. 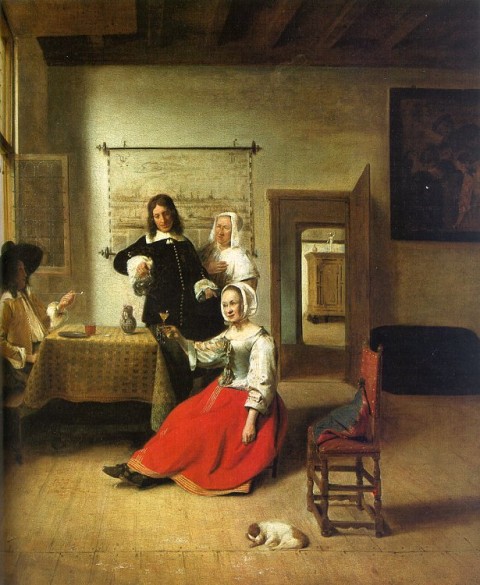 That would account for this story of butt-hurt Republican marketing, via the Harpers Weekly Review:

“I’m very open about it, very public about it, that I’m going to charge them a little bit more, and I have liberals come in and pay the extra dollar surcharge,” [George] Burnett said, referring to his unique pricing structure.

Yep, Burnett, the diehard supporter of domestic energy and longtime health food fan, charges those who identify themselves as liberals one dollar more for their drinks. The money, along with any tips received, is donated to conservative causes like The Heritage Foundation. [h/t @DylanByers’ twitter feed]

As Burnett’s shop is in the heart of Utah oil and gas country, it’s not particularly surprising that this isn’t much more than a gum-flapping exercise.  As of the date of this local story (Jan. 14) the smoothie merchant said that “all three liberals have been happy to pay” his liberal tax.

Still, this has to rank as one of the most pathetic forms of political expression I’ve come across in the more than three decades since I first achieved the franchise.  I suppose it may count as smart marketing in Burnett’s catchment area; the crowd that thinks buying cardboard chicken sandwiches in opposition to same-sex marriage is a peach of an idea would no doubt be willing to gulp down some yogurt drinks in solidarity with this attempt to stick it to the Liberal Man.

But as long as our opponents want to emphasize that they see us not merely as political adversaries but as illegitimate others, I’m actually a happy clam.  These are not the actions of a majority coalition.

And if by some sweet chance this guy starts to struggle to make his rent?  No tears, dude:  welcome to the free market.

END_OF_DOCUMENT_TOKEN_TO_BE_REPLACED

Republican wackaloon Rep. Paul Broun thinks that evolution and the big bang theory are lies told by librul soshulists to keep righteous dudes from allowing God to go traipsing through the tulips of their hearts.

He is a doctor — a medical one! — and he serve on the Congressional science and technology committee because that’s clearly where he belongs, mirite?!

END_OF_DOCUMENT_TOKEN_TO_BE_REPLACED

Part of the deal with libertarianism, in my experience, is that you get to embrace the “me first” economic school while still holding your nose about those churchy rubes in mainstream conservatism. You get all of that welfare mother hating without that anti-science, apocalyptic aftertaste. The only problem is that you always end up supporting social conservatives anyway. I can’t tell you how many people have acted all hurt and offended when I point out that the Koch brothers are just garden variety Republicans. Also too, libertarians get offended when you point out that, however many position papers they published on the police state, Cato’s biggest effect on the world is to elect Republicans– and there’s nothing the GOP likes as much as unfettered police power. It’s tense, is what I’m saying.

One issue that libertarians and social conservatives can always agree on is voucher schools, right? Get the government out of our government schools! Let the benevolent power of the market fix all of our problems. Including the problem where our students are taught that the massacre of American Indians and the Klan weren’t so cool. From Indian Country:

Louisiana Gov. Bobby Jindal’s voucher program to privatize public education has come under fire recently for spending state tax dollars to teach Bible-based curriculum. An August 7 post on MotherJones.com, a news outlet covering the 2012 elections, took a look at the program and 14 “wacky facts” kids will learn under the state’s new program.

One of those “facts” is that “God used the Trail of Tears to bring many Indians to Christ.” The tidbit comes from a 1994 A Beka Book, which offers Christian education materials, titled America: Land I Love.

Another “fact” the schools will teach is that the Ku Klux Klan “in some areas of the country tried to be a means of reform, fighting the decline in morality and using the symbol of the cross. Klan targets were bootleggers, wife-beaters, and immoral movies. In some communities it achieved a certain respectability as it worked with politicians.” That information comes from United States History for Christian Schools (Bob Jones University Press, 2001).

Whoops. Although if you can smash a union or two and get some teachers off of the government dole, small price to pay, amirite?

END_OF_DOCUMENT_TOKEN_TO_BE_REPLACED

It seems that Rush Limbaugh Fat Bastard has uncovered the secret agenda of the Kenyan usurper and his alliance with al-Qaida:

What if Ayman al-Zawahiri and other al-Qaida leaders gave up Osama Bin Laden for the express purpose  of making Obama look good? Giving Obama stature, political capital. Obama got Osama! I mean really, do you think al-Qaida depends on Osama Bin Laden any more, like it did?… So they give him him, they give away his location. We go in, SEAL Team 6, Obama puffs up… Keep him in power, furthers the cause… Do you think the militant Islamists will be as hopeful of getting rid of Israel with a Republican president or with a Democrat president? Just throwing it out there.

Just throwing it out there.

END_OF_DOCUMENT_TOKEN_TO_BE_REPLACED

…does it mean you might not be ready for Prime Time.

Unless the Romney campaign has gamed this crisis out in some manner completely invisible to the Gang of 500, his doubling down on criticism of the President for the statement coming out of Cairo is likely to be seen as one of the most craven and ill-advised tactical moves in this entire campaign.

Romney’s decision to use a fatal attack on Americans as an opportunity to seek political gain based on a complete lie is just the latest example of his copyrighted #romneyshambles campaign. It is a classic #romneyfail.

The debates are weeks away and Romney has many, many more opportunities to dig his hole deeper (like his sit-down with Univision on 9-19 to discuss Latino issues).

Sure Bill Krystol still has his back, but it won’t be long before even he joins other nutters in marking Mitt as roadkill.  The Paulites and Teabaggers will move their support to the Libertarian candidate (to punish the GOP for nominating Mitt-the-fuck-up) and everybody else in Wingnutopia will move their energy towards saving GOP control of the House.

Asshole is way too polite to describe a craven creature like Mitt.

END_OF_DOCUMENT_TOKEN_TO_BE_REPLACED

Not much new to report. We drove through the tunnel that separates West Virginny and Virginny. I announced that I would try to hold my breath the way we woodwind nerds did back when I went on road trips with the Philadelphia Youth Orchestra in high school. I don’t have the lung capacity that I did back then (when I played the clarinet), but I think I would’ve made it if the Cranky White Guy hadn’t started slowing down in an effort to make me pass out. ::shakes fist at front seat::

We’re still rocking the First Wave Sirius channel. JG is yelling at it to play some more New Order. I don’t think it’s sentient, but who knows — I’m in a car with John Cole, so clearly the normal rules have flown right out the window. Up is down. Black is white. Cats and dogs living together. It’s sheer madness.

Oh, and John Cole forgot his pants at home. D’oh! I have confirmed that he is wearing shorts and not driving Miss Crazy in his underwear… Yet.

END_OF_DOCUMENT_TOKEN_TO_BE_REPLACED

Cole (or JG as his friends and family call him) lovingly dotes on his tomatoes, and it shows. They are delicious. He packed a cooler of snacks so we don’t have to eat fast food. He’s full of good ideas. 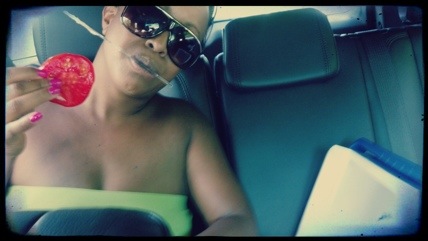 He is being a big baby about “unauthorized photos,” but that isn’t going to stop us from trying: 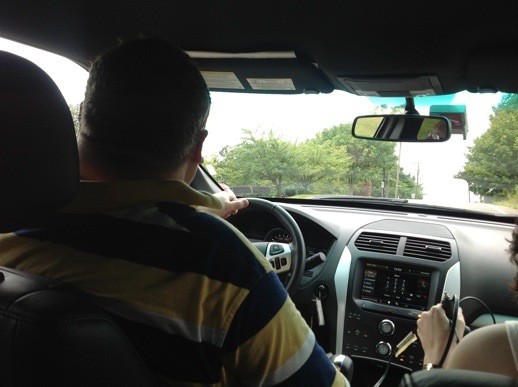 I scolded him and said that the people paid for our trip, so we should give the people what they want. His response? “Fuck the people.” And people** say, I’m the angry one: 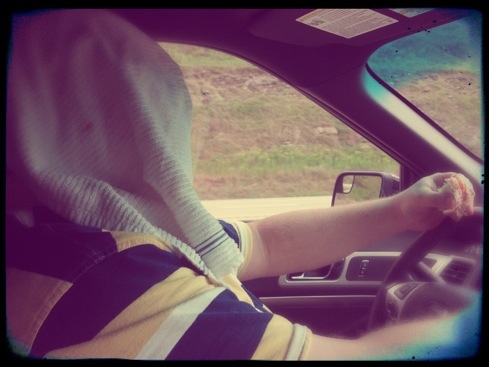 **Yeah, I know. Self-titled and all that. Just go with it.