You are here: Home / Archives for Foreign Affairs / Countries / Canada

'There's a price to pay for what Putin has put us through now. This isn't, bully the world and then take a walk and you're off the hook,' U.S. House Speaker Nancy Pelosi said after participating in security talks in Germany pic.twitter.com/ypHVV4lIfb

The thing about Biden is that he would much rather be embarrassed than right on this one, which is why he's a good president. https://t.co/ukaaJLShnE

??Asked what US should be prepared to brace for if “war” happens, @VP Kamala Harris tells me Americans may have to “put ourselves out there” and may see energy costs rise. “But we are taking very specific and appropriate I believe steps to mitigate what that cost, if it happens.” pic.twitter.com/Wcqi31OYxk

This is my shocked face. https://t.co/9KbZa6nczF

The Mayor of Ottawa just said the city is looking into selling the seized trucks from the Freedumb Truckers to help offset costs of the occupation.

Tell me you don’t know a thing about Tiananmen without telling me. https://t.co/S1pOGUZopv

I swear I will physically tackle the next person who pulls up references to tank man, June 4th massacre, the Cultural Revolution in relation to the current crackdown in Ottawa.

END_OF_DOCUMENT_TOKEN_TO_BE_REPLACED 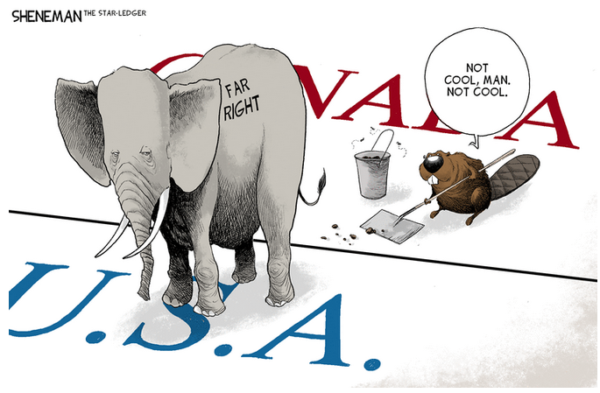 Saturday morning megaphone: protesters proclaim “you’ve got nothing to fear. The police are our brothers.” In full sight of them, there are two police armoured vehicles and tactical officers getting ready to roll. Video by @crystaloag pic.twitter.com/9FdIhN0nU0


F*cked around, found out…

Tow trucks hauled away vehicles blockading central Ottawa and protesters scuffled with police who made arrests on Friday to end a trucker-led movement that has challenged Prime Minister Justin Trudeau's government https://t.co/7RZPVqqlra pic.twitter.com/W0D33CmAQA

This is the funniest AND scariest thing, from 1/6 to this convoy crap etc etc. They truly believe they're allowed. That the police are their people. That overthrowing elected officials is their unimpeachable right. When they find out otherwise, they leap to violence & revenge. https://t.co/By5OWb6xCh

#BREAKING: Ottawa police say they have arrested 47 people on Saturday and towed 38 vehicles since Friday.https://t.co/5kaJH1rDWN

I am no lawyer, but I am pretty sure waving your underwear on a stick to escape crimes does not give you status under international law. ?? https://t.co/hI2RuBBIv5

These are real truckers pic.twitter.com/2F8jpM4xty

I wrote about the truckers in Canada in “Wait, What” in ⁦@TheAtlantic⁩ https://t.co/HagbGTE2UF

… But all the conservative think pieces in the world can’t change the facts: The group doesn’t represent anything near a majority of either truckers or Canadians. According to Trudeau, almost 90 percent of Canadian truckers are vaccinated. And many in the convoy aren’t even truckers. This isn’t a movement; it’s a Rorschach test, and the far-right media (including the polite right) see working men rising up against their oppressors. The rest of the media, meanwhile, are reporting on the protests without jumping to the conclusion that society is crumbling in Canada. (In fact, Ottawa’s chief of police has resigned following criticism over the weak response to the protests, which led to supply-chain issues for American carmakers and millions of dollars in lost wages for American workers. Eventually Trudeau declared a national public-order emergency.)

Tucker Carlson? He’s selling “I ❤️ Truckers” shirts that are a play on his name for 35 bucks. Elsewhere on Fox News, Sean Hannity told his viewers on February 11 that if Canadian-government officials “dare send the military in or cops or law enforcement in to arrest these guys, that’s on them. Whatever the result of that is will be on them.” Hannity also told Fox’s Sara Carter to “send our solidarity, love and support to all of the brave people who are there.” Solidarity! That’s quite a break from how Hannity, vocal critic of the Black Lives Matter movement, tends to talk about protesters. Turns out he doesn’t “back the blue” when it comes to the Canadian police or anyone who’s trying to police something he likes… 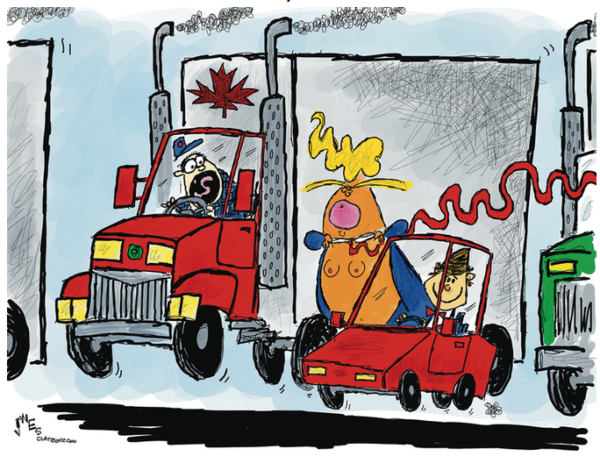 END_OF_DOCUMENT_TOKEN_TO_BE_REPLACED

Last night in the comments to my post on the Rittenhouse case and trial, Cacti posted this comment:

And I posted this reply:

I’ve moved from group 1 to group 2 over the past 6 years as a national security professional!

As a result of my disillusionment, it is nice to be reminded of when we actually live up to and live the ideals that are the real America, rather than the degraded dregs of white supremacy unfortunately deeply interwoven into our structures and institutions and those who see nothing wrong with this unfortunate reality that we saw so clearly on display yesterday.

Here’s a great example provided to us by the folks at Canadian Forces in the US. I’m going to put most of this below the read more widget as it is a LONG thread and I know on older machines that how Twitter’s code interacts with our code can cause people problems:

It's December 1917. Canada has been at war for more than three years.

But children in Halifax are excited because it's almost Christmas.

Vince Coleman did not. pic.twitter.com/CBb66m0rLo

Canada saw them as a problem merely because they existed on their own land.

The explosion leveled the Mi’kmaq community of Turtle Grove, or Kepe'kek, killing most of its members.

Canada’s long-term relief efforts were readily available for some, non-existent for others. pic.twitter.com/W1WnT3IX3W

USS Tacoma was 52 miles away when the crew felt the blast. Captain Powers Symington altered course to head towards the explosion.

They went towards the explosion. pic.twitter.com/RRShCdz1mL

Captain Symington’s report to his squadron commander, Rear Admiral Johnson, from 6 DEC 1917 is below the jump followed by the rest of the thread:

SUBJECT:  Report on disaster in Halifax.

Doctors and nurses pour in from neighboring provinces.

Doctors and nurses rushing toward danger. Familiar then. Familiar now.

A relief committee in Boston raised the equivalent of $1.9 million within an hour.

The people of Massachusetts sent the equivalent of $15 million in total to support relief efforts.

Joseph Ernest Barss was recovering in Halifax after being wounded in the war. He said the city looked worse than Ypres.

After three sleepless days of caring for victims, he was relieved by medics from Boston.

“It brought tears to all our eyes. They can have anything I’ve got." pic.twitter.com/LQ7iJ8OV82

In less than 24 hours, members of the Maine National Guard transformed a badly damaged building into a hospital with 200 beds.

They treated patients through the night.

Americans stayed behind for months, years in some cases.

How could we ever forget? pic.twitter.com/boHrMwFNsm

This tree in Boston Common is from Nova Scotia.

The Nova Scotians send one every year.

To say we remember.
To say we'll never forget.
To say thank you, neighbors. pic.twitter.com/2WvqHPGrWn

END_OF_DOCUMENT_TOKEN_TO_BE_REPLACED 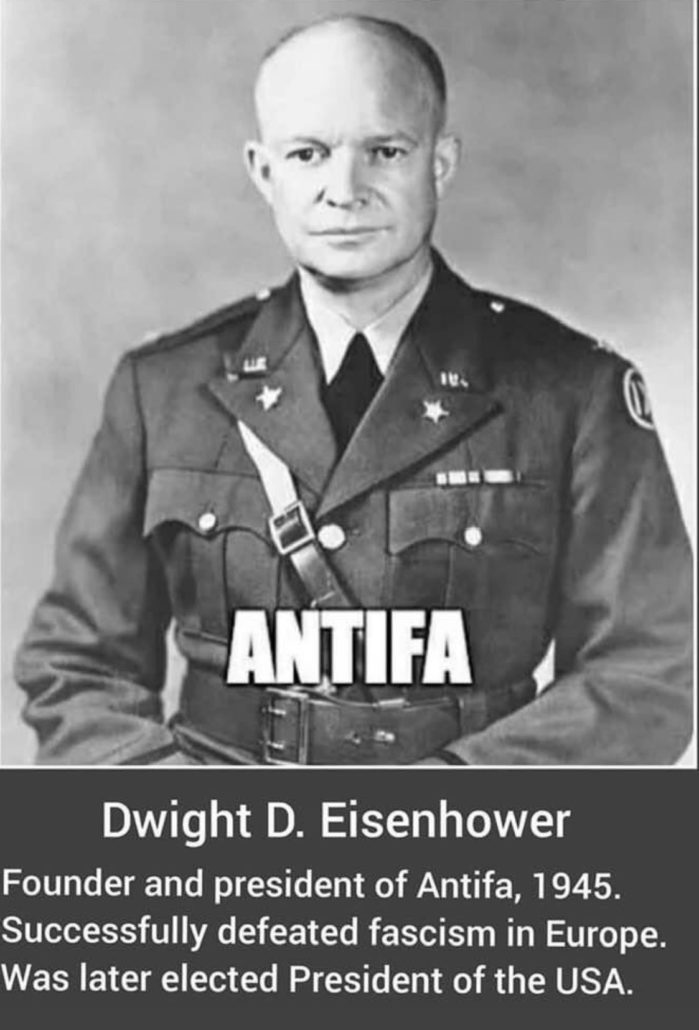 77 years ago today, the Allied Expeditionary Forces of Britain, Canada, Free France, and the United States undertook the D-Day invasion of Normandy. The US landed its forces on beaches code named Utah and Omaha, the Canadians on Juno, the Free French on Sword, and the British on both Gold and Sword. For a more detailed description of the invaluable contributions of our British, Canadian, and French allies on D-Day, please see my post from 2018.

Her is the audio of General Eisenhower’s Order of the Day to the Allied Expeditionary Forces on 6 June, 1944:

And here is the audio of NBC’s radio broadcast coverage of the initial stages of the Normandy landings: 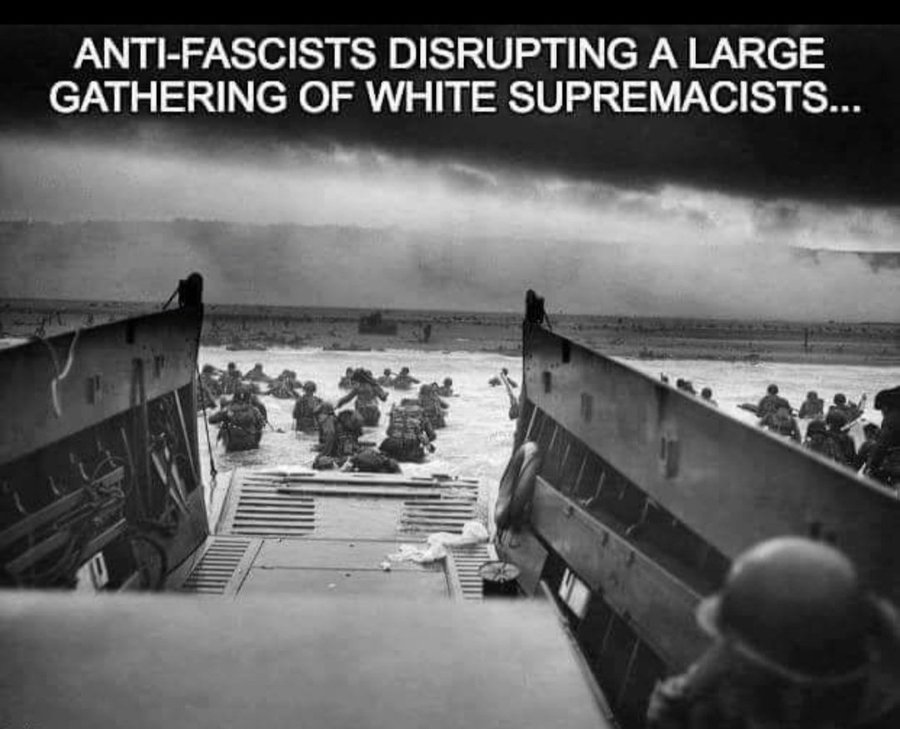 While he was not part of the D-Day operations, it is somehow fitting that the news of the passing of David Dushman, the last of the Red Army Soldiers who liberated Auschwitz, should be reported today. Dushman, who was Jewish, was a young tanker in the Soviet Army.

END_OF_DOCUMENT_TOKEN_TO_BE_REPLACED

I spent a couple weeks in Montreal last month as a half-working half-vacation. I’d never been, but I’d heard such good things, and we got a very good deal on a sublet. Lovely city; I’d happily settle down there, though I’d have to learn French for real, which isn’t la fin du monde.

Anyway–they seem to be very proud of one of their local boys who made good:

I share their love of Leonard Cohen. There’s actually a much bigger mural downtown, but I couldn’t get a good shot of it. I’ve been meaning to share this with y’all, and this gloomy-slow-day-at-work seemed like the right time.

So, without further ado, here’s a song that I find calming and centering, even (especially?) when the world is on fire.

Below the fold, a deep cut live video featuring Sonny Rollins, and a picture from a visit I made to his grave…

One of my favorite saxophone solos ever: 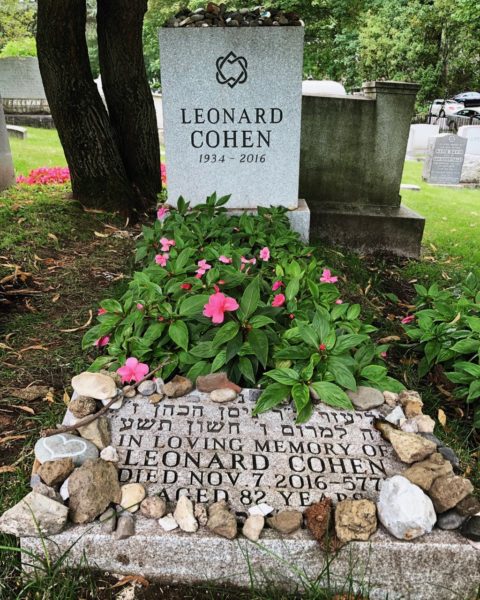