You are here: Home / Archives for Gun Issues / gun safety

Welcome to the Gunshine State!

Take it away Daytona Beach News-Journal!

A handgun was swiped from a Deltona home during a weekend sex party and the gun owner couldn’t give detectives any names of possible suspects because the culprit — like the 20 or so other guests at the party — was wearing a mask, deputies said.

“We’re probably not going to solve this one,” Volusia County Sheriff’s Sgt. Todd Smith said during a public meeting Thursday. “And DNA (identification) is not going to be an option.”

Guests who were invited to the party near Saxon Boulevard were encouraged to “come and go as they pleased” throughout the weekend and were told to bring friends and acquaintances if they so desired, the report stated.

Additionally, guests were told to use fictitious names or no name at all, the homeowner told the Sheriff’s Office.

The homeowner eventually told the detective that 20 or so people were in his house that weekend and he guessed that he only knew five or six of them, the report stated.

The party was advertised on a social media site, deputies said.

All this needed to achieve peak Floriduh! Man is an alligator, a golf cart, and several kilos of cocaine!

END_OF_DOCUMENT_TOKEN_TO_BE_REPLACED

Tim Ryan announces he’s withdrawing from presidential race and tells Republicans to “get their shit together” in same clip. #WhiteNationalistTerrorism pic.twitter.com/mhRiHN3l2m

It's been pointed out that he said "suspending" and not "withdrawing"

(IIRC, ‘suspending’ means he doesn’t lose access to any presidential-campaign funds he may have collected, so it may be just a legalism)

The Democratic candidates are not mincing words in their reactions to this weekend’s horrors. https://t.co/ljAfu58qel

What an astonishingly gross for McDaniel to say. El Paso is O'Rourke's home town and the congressional district he represented.

In a society with any sense of decency, a GOP chairwoman would resign over making a comment like this. https://t.co/1sspMLbTWn

HOW TO TAKE ACTION: The Senate needs to come back from recess NOW and vote on background checks and Red Flag legislation.

Text CHECKS to 644-33 to be connected with your Senators and tell them to act on background checks. pic.twitter.com/QJ1IHWjZ28

END_OF_DOCUMENT_TOKEN_TO_BE_REPLACED

While we wait for details on the most recent mass murder (the one in Ohio), further evidence is emerging that the El Paso shooter was a Trump-supporting, immigrant-hating white supremacist who was radicalized online and committed his horrific crime to achieve political ends. In other words, a terrorist.

Many lines from the so-called manifesto the terrorist published could have been tweeted by Trump, GOP Chairwoman Ronna Romney McDaniel or the perpetrator’s own US Senator, John Cornyn:

Trump tweeted the following this morning:

The FBI, local and state law enforcement are working together in El Paso and in Dayton, Ohio. Information is rapidly being accumulated in Dayton. Much has already be learned in El Paso. Law enforcement was very rapid in both instances. Updates will be given throughout the day!

Thanks, President Police Scanner. Now go load your ass into a cart and play 18 holes at your self-branded resort on our fucking dime, you worse than useless sack of shit.

Regarding the El Paso shooting, Trump can’t and won’t connect the dots since they lead directly to his bloated orange carcass. The mainstream media is unlikely to connect the dots forthrightly today, if ever. TPM describes the terrorist’s gaslighting strategy:

There’s abundant evidence the shooter is a big fan of President Trump and certainly of his worldview. And yet the manifesto includes a sort of preemptive rebuttal of any claims that he is a Trump supporter or that Trump influenced. He predicts that “the media” will identify him as a white supremacist and blame President Trump’s racist and xenophobic rhetoric for radicalizing him and provoking the attack. Such claims would be “fake news” and such claims will indeed only prove that “the media” is “fake news.

It’ll be clarifying to see which non-Fox News media outlets participate in the white supremacist terrorist’s clumsy attempt at obfuscation. So far, the signs are not encouraging.

We’ve had a rise in hate crimes every single one of the last three years during an administration where you’ve had a president who’s called Mexicans “rapists” and “criminals,” though Mexican immigrants commit crimes at a far lower rate than those born here in the country. He is a racist and he stokes racism in this country, and it does not offend our sensibilities, it fundamentally changes the character of this country and it leads to violence.

END_OF_DOCUMENT_TOKEN_TO_BE_REPLACED

An estimated 20 are dead and many more wounded. The shooter opened fire in a Walmart with an assault rifle.

Texas Lt. Governor Dan Patrick told Fox News that 21-year-old man is in custody in connection with the shooting, which unfolded in the area of Cielo Vista Mall in El Paso. As many as 20 people are dead, Patrick said. https://t.co/kCGFlgPAdf

There are rumors that the killer published an anti-immigrant screed on one of the chans, but it hasn’t been confirmed. Jesus, this is sickening.

END_OF_DOCUMENT_TOKEN_TO_BE_REPLACED

They said “send her back” but Speaker @SpeakerPelosi didn’t just make arrangements to send me back, she went back with me ???

So grateful for the honor to return to Mother Africa with the @TheBlackCaucus and commemorate The Year of Return! #Doorofreturn #Ghana pic.twitter.com/0yVBLcAEs5

Looking at my timeline about all that the Democrats are doing wrong again, and thinking how much worse it would be if the Dem presidential candidates had won the popular vote in only four and not five of the last six presidential elections.

Oct 2, 2019- @GiffordsCourage
& March for Our LIves (@AMarch4OurLives) will host 1st Presidential forum ever on guns in Las Vegashttps://t.co/HioSvSJek7

I will max out my donation to the first major candidate to say that hardcore gun people are insane weirdos who can only get aroused at the thought of shooting a home invader, and no one needs to respect them or care about what they think

"I’ve worked my ass off for everything I have. I know this race is gonna get dirty, gritty, sexist, maybe even racist. And I have no fear. I’m working my ass off again, because I don’t intend to lose this election.”
Really good read from @joanwalshhttps://t.co/6Haah6vZfn

END_OF_DOCUMENT_TOKEN_TO_BE_REPLACED

We already knew the National Rifle Association laundered Russian money and spent $30 million to elect the corrupt and incompetent Trump and millions more to stock Congress with spineless toadies like Marco Rubio. This ensures that a dwindling cohort of gun-humping nutbags prevail in policy decisions over the will of the American people.

Now there’s proof that the gun manufacturers’ lobbying organization actively works with crackpots to harass and defame survivors of the inevitable massacres that occur as a result of those policies. Via The Post:

But the day after the Feb. 14, 2018, shooting, an NRA training coordinator based at the group’s headquarters in Fairfax, Va., sprang into action behind the scenes. He sought information countering the official version of the grisly, and familiar, events, which involved a lone gunman and a legally purchased firearm.

For support, he turned to Wolfgang Halbig, a conspiracy theorist intent on proving that the 2012 shooting at Sandy Hook Elementary School, which left 26 students and staff members dead in Newtown, Conn., was a hoax.

“You have included me with a lot of Information since the Sandy Hook Incident and I do appreciate it very much,” the NRA coordinator, Mark Richardson, wrote on Feb. 15, 2018, according to emails published by HuffPost on Wednesday. “Concerning what happened in Florida yesterday, I have been asking the question and no one else seems to be asking it.”

He pushed the deluded idea that the gunman, a former student at the school, had not acted alone, posing questions about how he had gained entry and where he had kept his equipment…

In a sane country, it past misdeeds would have already made the NRA more toxic than a Chernobyl urinal cake, and no politician would dare accept a dime from it for fear of massive constituent backlash. In this country, not only do Republicans at every level continue to eagerly accept millions from this vile propaganda outfit, the current Republican president spoke at its convention last year, and he and his VP invited one of the blood-gargling sociopaths who lead the NRA to the White House immediately after the Parkland massacre to weigh in on policy, if not write drafts of legislation outright.

I understand the House Democrats are busy sifting through the mountainous evidence of the Trump administration’s unprecedented corruption. But I do hope they find the time to investigate and expose the NRA’s financial malfeasance and psychotic attempts to foment hatred toward victims in its fanatical cult following. Wiping that wretched hive of scum and villainy from the political landscape would not only strike a blow for good governance, it would be a favor to humanity.

END_OF_DOCUMENT_TOKEN_TO_BE_REPLACED

This weekend was the anniversary of the nationwide March for Our Lives rallies led by survivors of the massacre at Marjorie Stoneman Douglas High School in Parkland, Florida. It seems much longer ago somehow. Here’s Emma González’s speech at the event last year:

She doesn’t speak for most of her time at the microphone, commemorating with her silence and tears the six minutes and change it took for a deranged shooter with an AR-15 to end 17 lives. Then she said this: “Fight for your lives before it’s someone else’s job.”

I went to a local March for Our Lives event last year, as did our late jackal friend Schlemazel. He sent me some photos of the march he attended in Minnesota, including this one: 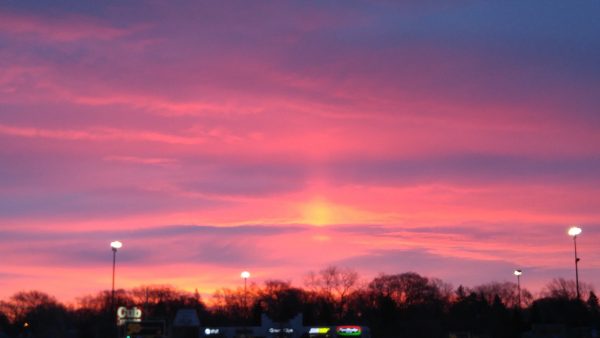 Here’s what he wrote about it:

“It was a gorgeous sunrise this morning and it gave me hope.”

The March for Our Lives founders went silent on the anniversary of the massacre last month. Via The New Yorker:

“It’s about recognizing that we need to take time for ourselves because we’ve been going so strongly for the past year without a breather,” Jaclyn Corin, a senior at Stoneman Douglas and one of the co-founders of the movement, told me in a recent phone call. “We’re giving ourselves that time to be with our friends and our family.”

It still amazes me that those students were able to pull together a movement that resulted in nationwide rallies just a little over a month after the trauma they endured.

The cost was terrible for all of them, and for some, it was unbearable. Last week, two Parkland students committed suicide. The father of a murdered Sandy Hook first grader, a man who created a foundation to prevent violence through research in the wake of his daughter’s senseless killing, was found dead today; he also apparently took his own life.

Those three names won’t be added to the tally of the victims of mass shootings in America, but they’re part of the toll. So now, speaking up for gun safety is our job, not theirs.