You are here: Home / Archives for John Cole Presents "This Fucking Old House"

Lily is very tired of this bullshit Mo-Do discussion, so she is racked out on the couch while Shawn plays the bass: 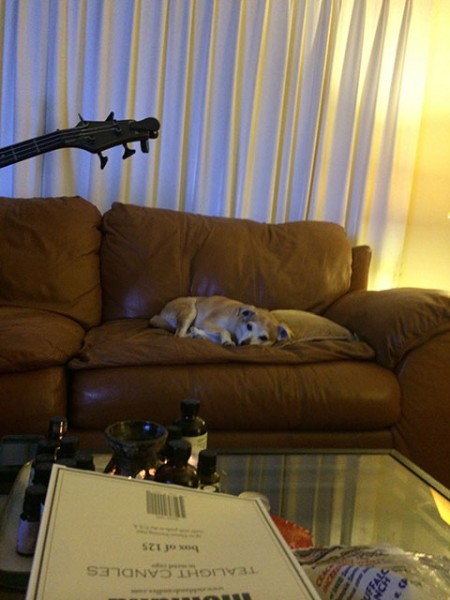 We’re actually playing Frampton (our buddy Geoff was a big Frampton fan, as well as Traffic), I just brushed Steve, Lily is approving of the music selection, all the pets have been pottied and treated, and I seriously think I am the luckiest person in the world. I have good pets, my folks are alive and healthy and live down the street, my brother and sisters are all healthy and I get along with them most of the time, and this is what Steve looks like right now as Shawn plays along: 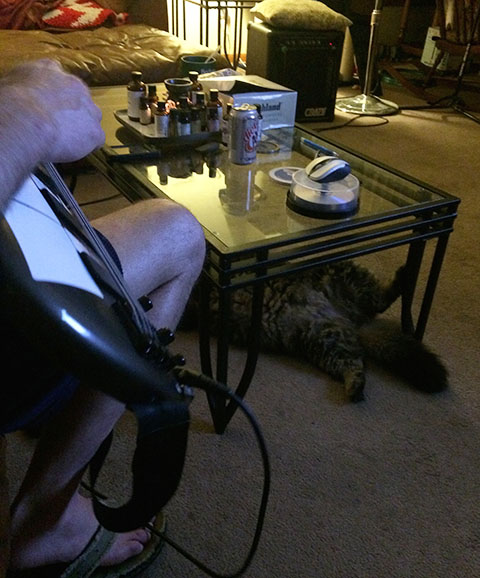 I have good animals, good family, good friends, good food, good essential oils, a calm and caring environment, and I just feel like I have finally figured shit out. Not to get all maudlin, but a lot of things in life take time to sort out and you have to figure out what matters. Sometimes it takes longer for others (translation- ME), sometimes the things you have gone through make the process slower. But when you get there, it’s so fucking sweet. Like honeysuckle plants in June with a cool breeze and no humidity and the Allman Brothers.

We all need a separate peace.

END_OF_DOCUMENT_TOKEN_TO_BE_REPLACED

A couple of the boys came down and did some yard work for me- I had a ton of poison oak and ivy in the back yard, and Christion is immune to it (he claims it is because he is black and Native American), so he pulled that out and we got a bunch of other stuff done before dinner. Shawn and I get poison ivy and oak so bad that if it is within a country mile and gets weed-eated we would need to go to the ER. I spent four days in the med unit during Basic Training at Ft. Knox because I got poison ivy the day before we had to spend 24 hours in MOPP IV, in June, in Kentucky, with 90 degree heat and 275% humidity. Yay, steroids. The upside was that I briefly had a nine inch long and four inch wide penis. Sadly, it was too painful to touch.

At any rate, I found some cheap chicken cutlets and C. and I flattened them out and breaded them and deep fried them with a bunch of sides and a salad you don’t care about, and then worked on some frat stuff. We hammered a bunch of stuff out about how we are going to approach the alums, and generally got a lot of important stuff done.

I’ve decided I am the weirdest misanthrope ever. I generally, instinctively, hate other people until they give me a reason not to. I hate meeting new people. Having said that, I am perfectly content with a couple of friends over every night. As long as I am in my own house, it’s all good. And it works out well- we all have a division of labor- the frat boys know when they come over that they are doing the dishes when dinner is done, Christion and I do the cooking, Shawn handles the pets, others handle the music and take the trash out or deal with what not. It’s oddly communal, but at the same time I would not hesitate to kick anyone out if they disrupt the serenity. As it is now, everyone takes care of the things in their niche.

It is weird, though, to spend so much time with young men half your age. Weird in the sense that a lot of the time when I hear them talk, all I can think is “Man, I remember saying and doing stupid shit like that.” All I can think is “I thought the same stupid things and was just as confused at one point, but I got out of it because I had older guys who got me right.” I guess Shawn and I are doing the same thing, telling them “You’re wrong, and this is why.” Not that we have shit figured out, but we’re pretty stable and harmless guys when left alone.

At any rate, tonight’s education is I am making them watch Richard Pryor Live on the Sunset Strip. Why? Because they need to see it. That’s why.

END_OF_DOCUMENT_TOKEN_TO_BE_REPLACED

There is just something magical about this time of spring in West Virginia when everything is lush and green and the skies are blue and there is a cool breeze and the humidity and unfavorably high temps have not set in quite yet. Just my favorite time of the year because you get to plant things and the birds are back and you realize that you and your sun lamp made it through another winter.

At any rate, I made some crab cakes and a garden salad and some yam fries, and we are watching hockey and brushing the critters, who are all shedding like mad. I honestly think I am to the point where I can say I like the NHL more than football. It’s just a better game and far more exciting to watch.

Heading to the greenhouse tomorrow to get the rest of the plants for the garden. What are you all up to?

END_OF_DOCUMENT_TOKEN_TO_BE_REPLACED

I have nothing to say.

END_OF_DOCUMENT_TOKEN_TO_BE_REPLACED

Name five people you would like to go to dinner and party with, and your answer can not be five supermodels (female or male) who all for some strange and inexplicable reason want to sleep with you.

I don’t know my five yet.

I am replacing my old 4 year old CyberPower PC (well, not replacing it, moving it to the second desk so Shawn can have a desktop) and am just going straight iMac. Got two 27″ monitors, 32 gigs of ram, top of the line graphics card, and am just going to run VMWare Fusion so I can still have access to Windows programs, so expect a shitload of frantic tech questions tomorrow. I’m to the point now that Ijust want shit to work, and Apple does that for me.

END_OF_DOCUMENT_TOKEN_TO_BE_REPLACED

Now that everyone, from President Obama on down, has denounced & repudiated racist arsehole Donald Sterling — SB Nation has a whole section devoted to the issue — what’s the National Basketball Association going to do about this stain on humanity? There was a former Clippers player on the local news tonight, saying that nothing could be done as long as Sterling “keeps paying his bills, and he’s paying them.” But Tom Ziller at SB Nation asks, “Will NBA owners fight Donald Sterling as hard as they have fought players?”:

… When the fraternity of NBA owners and their hired ringleader — the league commissioner — want something, they tend to find a way to get it done…

Just about any time an owner wants a public subsidy for a new or updated arena, they get it. When they don’t get it, the other NBA owners line up to approve relocation. The vote that killed the Seattle SuperSonics in 2008 was 28-2. When David Stern decided he wanted Sacramento to have a shot at keeping its team, he got it done despite threats from the Maloofs and it being a hard sell overall.

This is important: when Stern has wanted owners out — from George Shinn to the Maloofs — he worked the situations expertly and got the job done.

I have no question that several owners, maybe the majority of them, would like Donald Sterling to sell the Clippers and go rot in a dark hole. I have little doubt Adam Silver wants the same. The question at this point is how badly they want it. We’ve seen what the owners can do to players — primarily Black players, mind you — when they set their collective minds to it. They can win almost $3 billion in salary concessions over a decade. And they shut down the business to get it…

What do the owners and Silver think getting rid of Sterling: a proven racist scumbag, a repeat sexual harasser, a constant embarrassment, a man creating a rather hostile environment for his employees, a destructive member of society, a total idiot and a crummy team owner in a wonderful market to boot. Do they think getting rid of that is important enough to fight for?…

END_OF_DOCUMENT_TOKEN_TO_BE_REPLACED

Someone in the last thread mentioned white privilege, and I was reminded of something I meant to post a couple weeks ago. While I was doing my car search, I hit a lot of places to test drive a lot of cars even though I knew I was going to buy a Subaru. At any rate, I was absolutely shocked how many dealerships I went to, just walked in, said my name was John Cole and that I needed a car and was willing to spend up to 20k on a used one, but would prefer value.

Talked to them for a while, and at five different dealerships, without even showing a driver’s license, salesmen gave me the keys to a car and let me test drive the vehicles. On three occasions, they didn’t even ride with me- they just gave me the keys and slapped a dealer plate on it and let me drive off.

I’d like to think this is all because of the club tie, the firm handshake, and the easy smile, but I am almost certain it has something to do with the fact that I have blonde hair and blue eyes. It’s the little shit you don’t even notice about white privilege that makes it so hard for white people to recognize how fucking good we have it and how different our lives are from other Americans of different hues.

The whole experience reminded me of the Eddie Murphy SNL skit when he was in white face and went to the bank for a loan, and they just threw money at him.