You are here: Home / Archives for Photo Blogging / On The Road / French Basque Country

Steve from Mendocino takes us to French Basque Country

Having wound up my chronicle of time with Anee-Marie’s family in the Basque country, I find myself with a few leftover images of that and nearby areas.  I’m happy that many of you found this story entertaining. 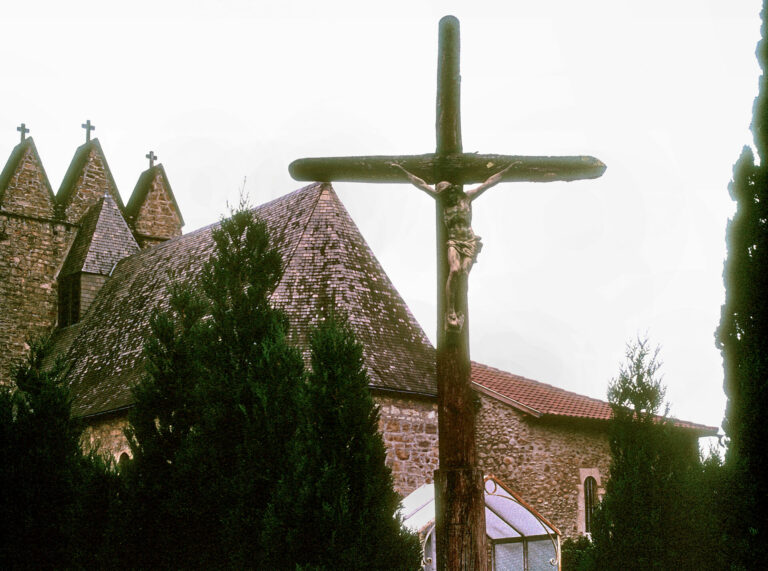 Another Basque church with the three crosses up top.

END_OF_DOCUMENT_TOKEN_TO_BE_REPLACED

Sauguis was the home of Bonne Maman and her kids and they would gather at her house during summer vacations.  They had their own vacation houses in the Basque country, but would meet often at her house for meals and cards and just hanging out. 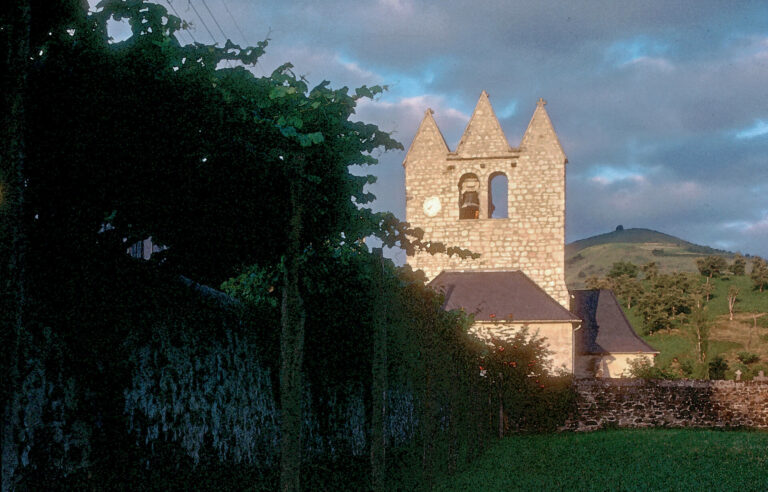 The Sauguis church with its typical three crosses.

END_OF_DOCUMENT_TOKEN_TO_BE_REPLACED

The Basque coast is absolutely charming, but during the summer, especially late summer, it’s mobbed, and driving and parking are a nightmare. Biarritz and St. Jean de Luz are obvious destinations, but Bayonne is the city that really anchors the area. Bayonne is less of a tourist destination and has more of a year-round population – or at least it did during the period when I was visiting in the summers. The area from Bayonne to St. Sebastien in Spain is an uninterrupted urban/suburban environment. 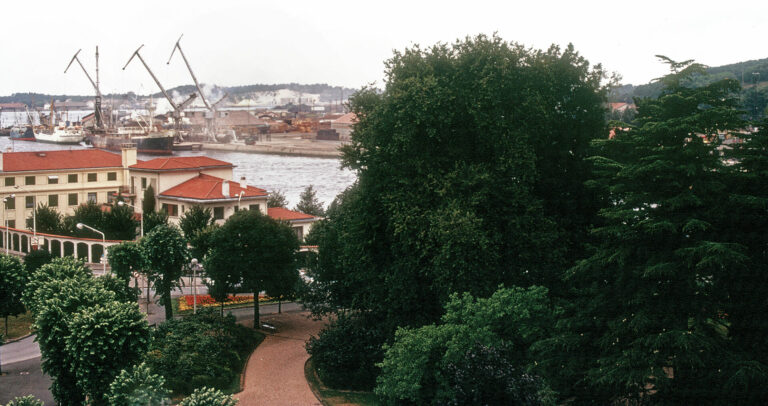 View of the Bayonne harbor taken from Anne-Marie’s aunt’s apartment.

END_OF_DOCUMENT_TOKEN_TO_BE_REPLACED

The accents in southern France are similar in that they all pronounce much more of the spelling than in other parts of France.  You can hear this in the Provençal accents in the twin movies “Jean de Florette” and “Manon des Sources” (which I heartily recommend in that order).  The accent in the southwest is similar enough to that in the southeast that I have a hard time distinguishing between them, but I’m sure the difference is obvious to many.  Like the Canadian accent, it’s much more pronounced among the working class than the college educated.

All of Anne-Marie’s uncles and aunts on her mother’s side moved to Paris for work and their accents softened a bit, but her parents and grandmother kept that sound in its delightful purity.  Parisians, of course, look down on nearly everybody from the provinces.

Today’s post is dedicated to Anne-Marie’s uncles and their kids. 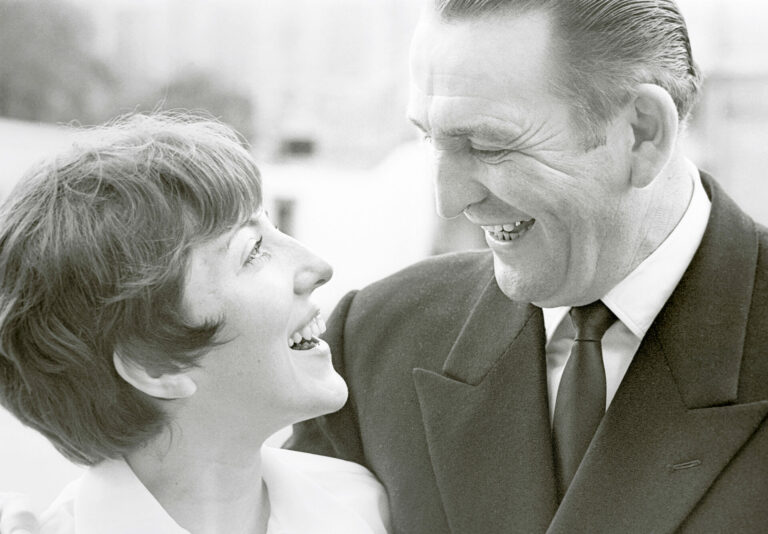 The oldest in the family was Marcelin.  He had a big booming voice and, as Anne-Marie says, “he talked with his finger,” waving it around to make a point.  He was in the French underground during World War II and was once hiding in a hay loft while the Germans were hunting with dogs.  Luckily a distraction came up and the Germans left.  Marcelin was gentle and kindhearted and had that generosity of spirit that every one of them had.

END_OF_DOCUMENT_TOKEN_TO_BE_REPLACED

There are seven Basque provinces, four in Spain and three in France.  St. Jean Pied de Port is the center of the three French ones arrayed along the Spanish border in the Pyrénées-Atlantiques mountains.  It was classified among the Most Beautiful Villages of France in 2016. 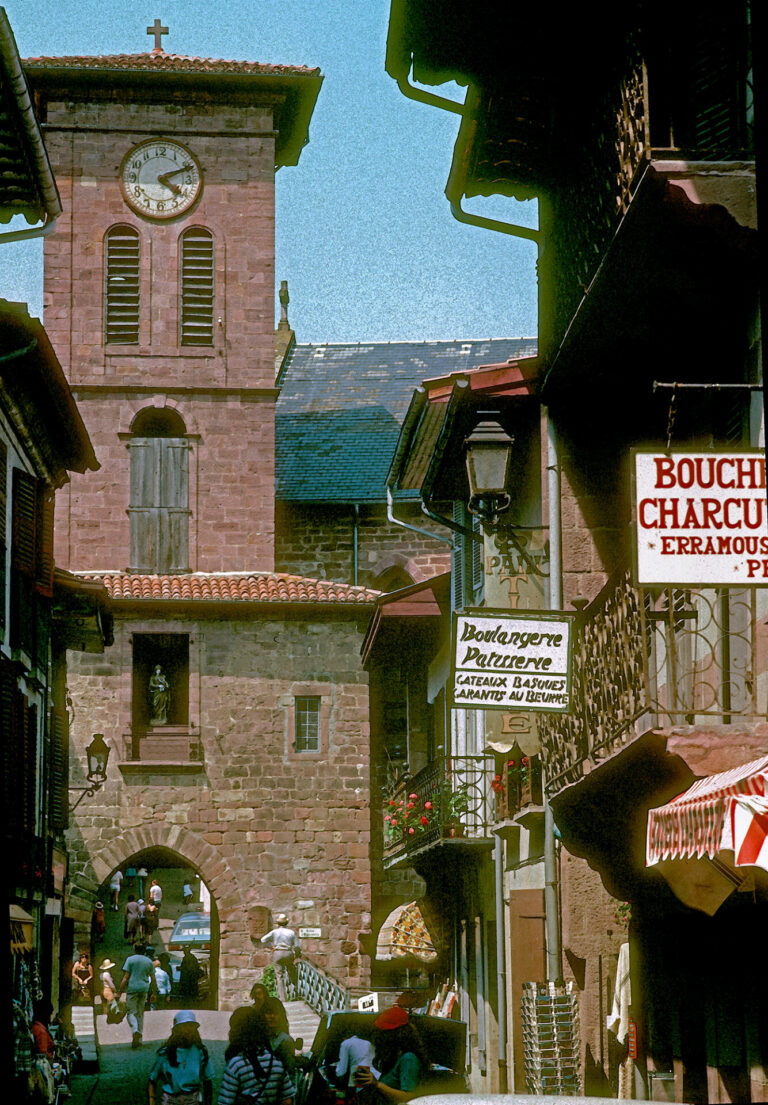 These first three photos are of the main street, rue de la Citadelle, which runs down hill and over the river Nive.

END_OF_DOCUMENT_TOKEN_TO_BE_REPLACED

On my first day back in France, I arrived alone for some reason.  I suspect Anne-Marie hadn’t yet finished the school year, or alternatively, she’d arrived before me.  I forget.  I came with my luggage to the restaurant owned and operated by her aunt and uncle, who concocted a joke for Anne-Marie’s sister.  The restaurant was full at lunch as usual, and they put me alone at a table for two.  When Monique arrived for her usual weekday lunch at the restaurant, they sat her with me on the pretext that they needed the other tables for service.  Monique knew of my scheduled arrival and asked me at one point during the meal whether I was “Steve.”  I denied it, and we all had a good chuckle later at Monique’s expense.

Anne-Marie and I stayed for a week in a spare bedroom in the apartment over the restaurant.  It sat on a side street off l’Avenue de l’Opera, opposite a premium horse butcher shop and a few doors down from a fire department.  Trash collection was loud and took place every weekday at 5:00 a.m. right outside our second story window.  Not something I was used to.  The bar opened every day at 6:00 am and workers came in for coffee, not infrequently accompanied by a shot or a glass of wine.  The work day for Anne-Marie’s aunt and uncle began at 5:00 a.m. and ended at 11:00 p.m.  Saturdays were slower and more relaxed for them, and Sundays were for cleaning.  The restaurant closed every year for the month of August.

The food was a reasonably high level of Dijonais and Lyonais cuisine.  The menu changed daily and included half a dozen main courses.  Andre, chef and half owner, produced 60 full meals every weekday lunch and about half that for dinner, with nobody helping him in the kitchen.  His wife ran the bar and handled the front end with the help of a server.  Every Sunday she took down every bottle behind the bar and dusted it, as well as scrubbing all surfaces and laundering napkins and towels.  Andre spent Sundays in the small cellar refilling bottles of Morgon and Côtes du Rhône from barrels.  About once a month he would prepare family meals for relatives who lived and worked around Paris.  At one of these he served a Grand Marnier soufflé.  I asked him how he made those.  He replied “with a bicycle pump.”

This was my introduction to the acceptance and generosity and love that Anne-Marie’s family extended to me for as long as they lived.  This is why I wanted to move to France. 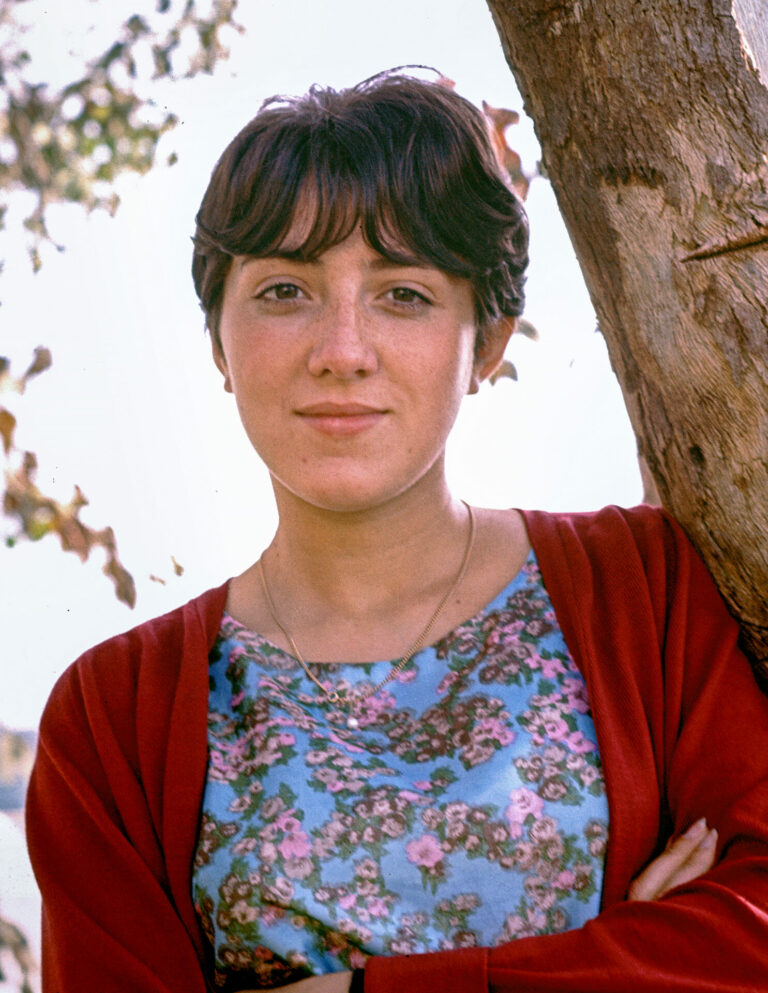 END_OF_DOCUMENT_TOKEN_TO_BE_REPLACED

These photographs are special for me in that they document a period and place and experiences that are more dear to me than any others and that profoundly changed my life. I grew up in a household of some affluence, although not opulent or without limits. School was easy for me through the second grade, at which point I transferred to a public school and classes became impersonal sources for assignments and evaluation. I got my first D in 4th grade, first F in 5th, and 3 F’s in 6th.

My parents sent me to an excellent prep school that lacked the social cachet of the schools where my friends and brother and sister went, but where my grades were ignored in favor of my score on the entrance test. After two years at this school I was thrown out, and my parents put me in a little international school on the outskirts of Lausanne, Switzerland, where I a year mostly focused on studying French, becoming fairly fluent in conversation and remaining largely illiterate in writing.  The usual unwillingness to study but more than happy to talk to people from Switzerland, France, Germany, Holland, Finland, Italy, Greece, England, America, Saudi Arabia, Turkey, and Africa.

After one year I was back at the prep school for another year before flunking out one more time. I spent the balance of my high school studies at average schools where I did reasonably well thanks to the education I’d gotten from my three years at that prep school. Upon graduation I went to UC San Diego in the last class that permitted admission based on SATs and subject tests alone. A year of hanging out with my stoner friends ended with me at risk of Vietnam and beginning to worry about prospects. I’d dabbled in photography during high school, and now I became determined to go to Art Center College of Design for a BFA. Admission required repair of my GPA, which I did with a year at Los Angeles City College.

How does all of this relate to the Basque country in France? During my year at UCSD I developed a relationship with my conversational French teacher, who was a student teacher working on her master’s in American literature. She is Basque on her mother’s side, Bearnaise on her father’s side, and grew up just outside the Basque country in Oloron-Sainte-Marie. At the end of her year at UCSD, her student visa expired and she was required to return to France. I was devastated, and we began looking for ways that would allow her to return. My father’s Sunday tennis group sometimes included the headmaster of the top women’s high school in the city, and he responded to my father’s query about job openings for French teachers by saying that their very old French teacher was no longer effective.  The spot was available to Anne-Marie, although the headmaster put my dad on notice that if the visa didn’t pan out, my dad was on the hook for teaching French. (He had spent a year at the same school in Switzerland that he sent me to).  She joined the school with a student/teacher visa and continued teaching there for the next 40 years.

Anne-Marie and I began living together immediately after she returned from France. My mother insisted that we have separate apartments, so we rented a second apartment that was never used. At the end of the first year of her high school teaching we flew to France — my first return to Europe after the 1960-61 year in Switzerland. I was confident that my French would be brilliant from the moment I got off the plane in Paris. Wrong. French at the airport was like a wall of alien noise. It took me a couple of days to settle back in.  My adventure with Anne-Marie’s family had begun.

I would remind everybody that these photographs were all shot on Kodachrome, which can be beautiful if handled carefully, but I was extremely casual. In daylight I used variations on f16 at 1/25 (f16 at 1 over the ASA); if there were clouds, I would open up a couple of stops. Kodachrome is unforgiving, and I’ve had to stylize a number of my photos to give them some semblance of artistic quality by making them look vaguely like paintings instead of badly clipped photos taken in high contrast conditions. I apologize. This is what I have. 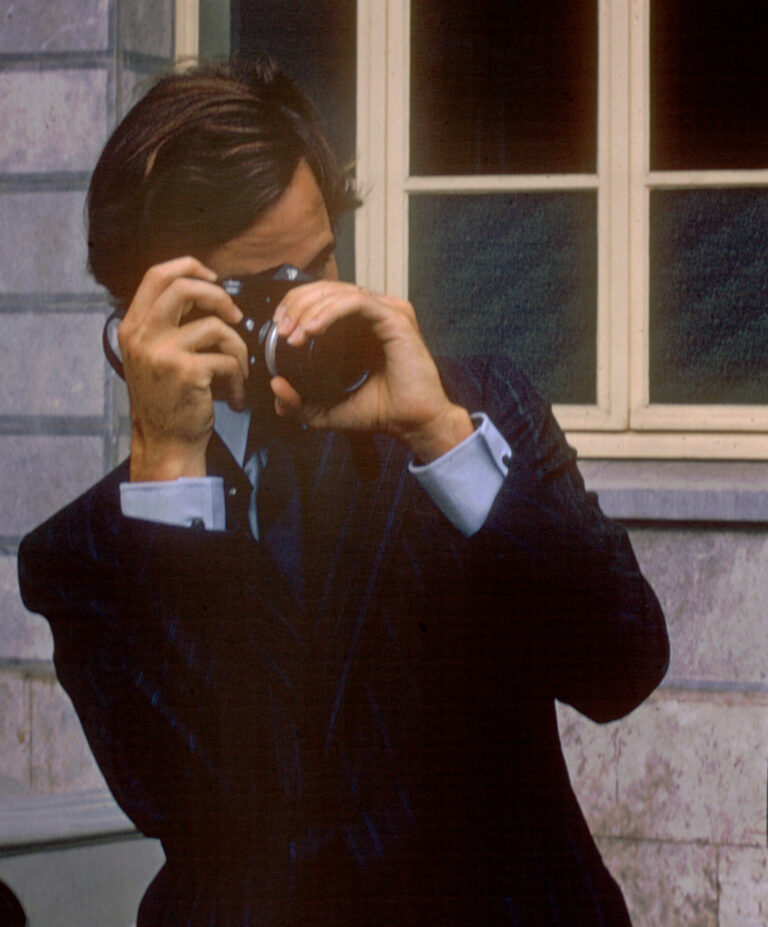 In France I almost always had a camera in my hand. This is me immediately after my exit from the mayor’s office where I’d just married Anne-Marie.  I was chasing around photographing Anne-Marie’s family as they organized their transportation to the country restaurant hired for an afternoon of delicious food, lots of wine, and delightful and hilarious family celebration.