You are here: Home / Archives for Photo Blogging / On The Road / New Zealand 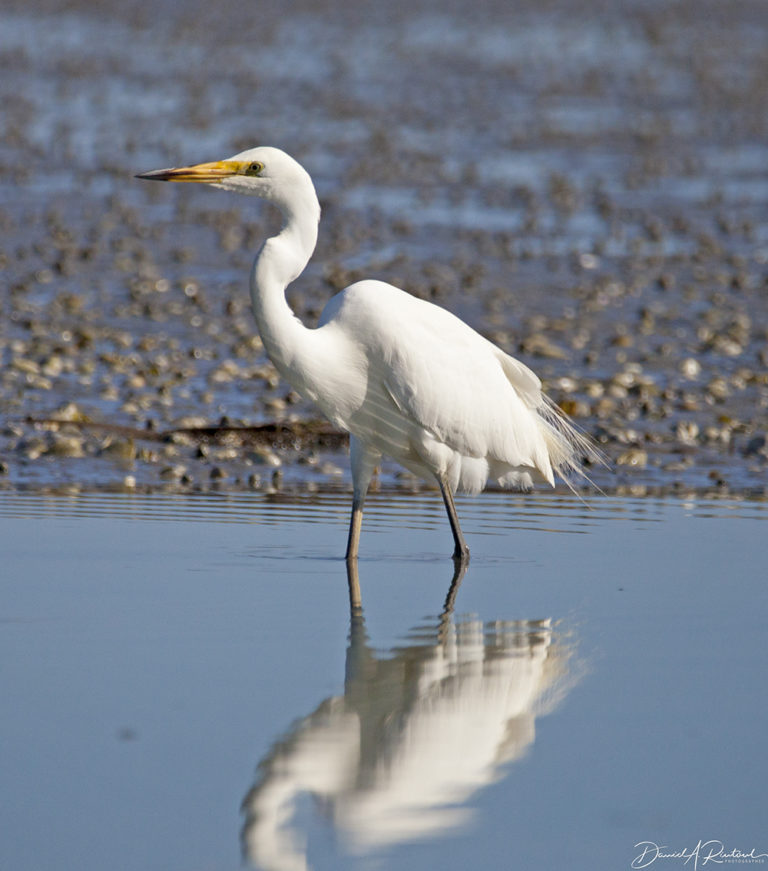 The White Heron (Ardea modesta, kotuku) is considered by some authorities to be a subspecies of the cosmopolitan Great Egret (A. alba), but New Zealand ornithologists are notorious “splitters” and have given it species status. And there are some morphological and behavioral differences to support that decision. They are a critically endangered species in New Zealand, with one known breeding site (approximately 30 pairs of birds) in the Okarito lagoon. After the breeding season they disperse widely across the country, but since there are less than 200 of these birds in the entire population, your best bet for seeing one is to go to Okarito and take a leisurely boat tour of the lagoon.

END_OF_DOCUMENT_TOKEN_TO_BE_REPLACED

The birds of the oceans around New Zealand have not been nearly as impacted by humans as the land birds, although that is changing rapidly as humans begin to impact the oceans more and more. It is still possible to see lots of seabirds, shorebirds, and waterfowl there, and some of them are unique to that country. Since I live in a part of the country that hasn’t had beachfront property for the past 70 million years, I really enjoy seeing seabirds when I get the chance. And New Zealand offers you lots of chances, so this post and tomorrow’s post will feature just a few of those. 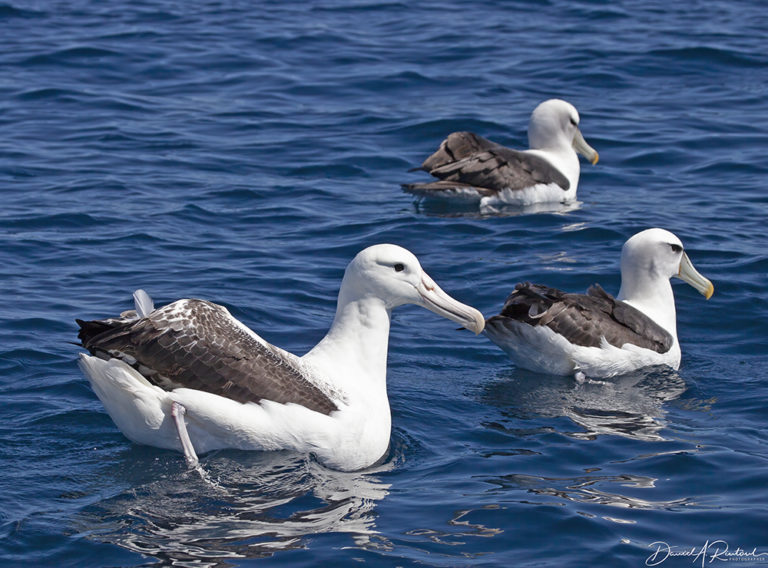 There are 22 species of albatross in the world, and 16 of these have been seen in New Zealand waters. I’ve seen six of them there, so obviously I have some work to do. One of the most spectacular is the Northern Royal Albatross (Diomedea sanfordi), a New Zealand endemic species. The Maori name for this species, and for all the other species of albatrosses, is toroa. When one of these approaches the boat, that 3 m (10 ft) wingspan gets your attention. This one was near Stewart Island, in the company of these two White-capped Albatrosses (aka Shy Albatross depending on which taxonomic authority you subscribe to), which have a wingspan of 8 ft, but obviously are much smaller than their huge Wandering companion.

END_OF_DOCUMENT_TOKEN_TO_BE_REPLACED

It is often said, and not entirely in jest, that if you drop your camera in New Zealand and it accidentally takes a picture, the picture will be stunning. There are indeed some beautiful landscape photo opportunities in that country, and although none of these were the result of a dropped camera, I hope you enjoy them anyway! 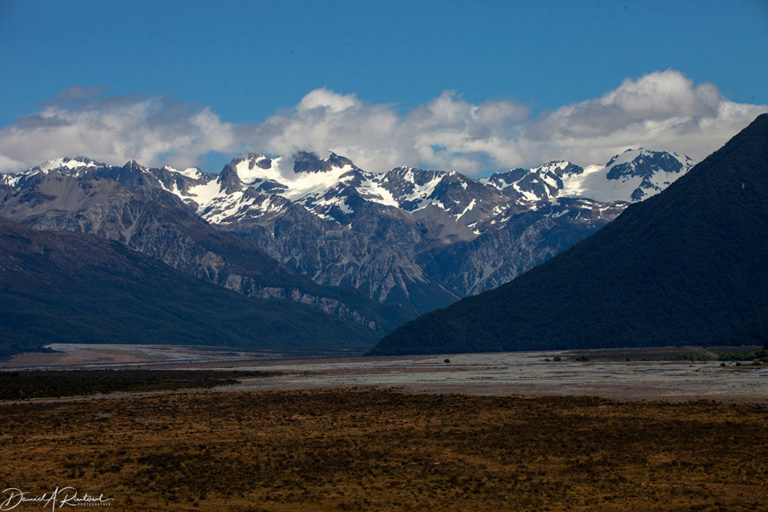 The Southern Alps run down the spine of the South Island, and dominate the scenery in much of it. This is a view on the road from Christchurch to the west coast of that island, via Arthur’s Pass, Midsummer snow is still on much of the alpine landscape, and a glacial river valley is in the foreground.

END_OF_DOCUMENT_TOKEN_TO_BE_REPLACED

The next set in this series is non-native animals in New Zealand. And there are a lot of those, from insects to fish to birds to large mammals, thanks to the intervention of the so-called Acclimitisation Societies in the 19th Century. It is almost directly across the globe from England, and the early European settlers missed their native land, so they set about to make it as much like England as possible. Besides clearing forests and planting crops and fighting with the Maori, they imported English and North American creatures. Some were to be hunted (moose, deer, quail, turkeys), some were to provide native birdsong (thrushes), some were to provide good fishing (salmon and trout), and some merely escaped or went feral (rats, cats, stoats, etc.).

All of these animals, if they persisted in this strange part of the world, had a deleterious effect on the native birds. In fact, the only known specimens of an endemic (and now extinct) NZ bird, the Stephens Island Wren, were collected by a single cat that belonged to the lighthouse keeper. Stoats and rats were the primary predators that nearly exterminated the Takahe. And the non-native birds and insects compete for nesting habitat, insect food, nectar, and other items that are important to the survival of the native birds. This scenario has been repeated on islands around the world, but nowhere was it as purposeful and widespread as it was in New Zealand. 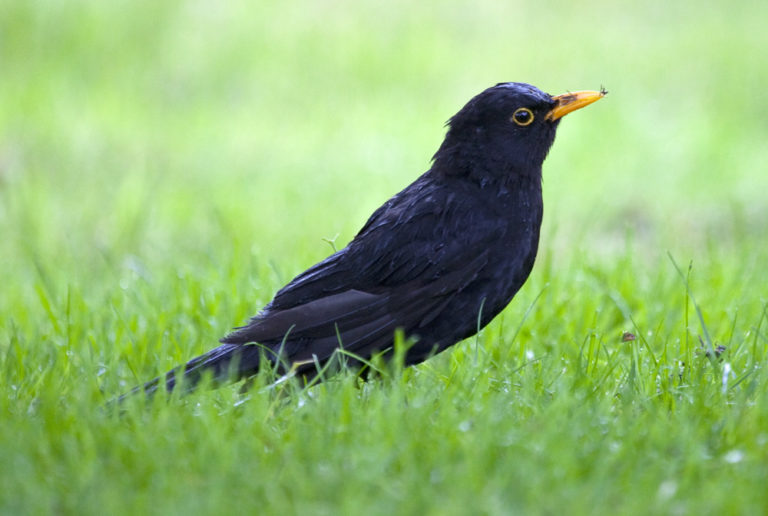 European birds were imported many times, and although not all of them became established, enough did so that the English settlers could hear birdsong reminiscent of their native England in woods and gardens throughout New Zealand. This European Blackbird (Turdus merula), photographed in Auckland, was introduced multiple times in multiple locations starting in 1862, and is now probably the most widespread bird in the country. Four-and-twenty of them are needed to make a pie, I recall.

END_OF_DOCUMENT_TOKEN_TO_BE_REPLACED

As a special holiday treat, we have a week in New Zealand, courtesy of Albatrossity.

Starting tonight, for this week and next week: Ghosts of Holidays Past.  Send in your photos!  You can send a full set with the On the Road form, or just send one or two that will go into a group post.  Be sure to include some text so we know what we’re looking at.  If you want to send photos but not have them identified as yours, let me know that, too.

I have been fortunate to visit New Zealand 5 times. The first in the early 1990’s, to attend a scientific conference, and it was in August (mid-winter in the Antipodes). I remember marveling at the cold drippy weather, the American TV shows that seemed popular there (e.g., WKRP in Cincinnati, why?), and the fact that sporting events being broadcast included lots and lots of sheep dog trials. The people were incredibly friendly, the scientific conference was productive, and I wanted to go back sometime.

Several years ago my brother-in-law and his wife emigrated there, and are now permanent residents. The process of immigrating to NZ is long and arduous, but they decided (most presciently) that US politics was in a continuous down-spiral and they wanted to be in a civilized country instead. They settled in Nelson, which is at the north end of the South Island and at a latitude similar to that of Arcata CA, or Providence RI for you east-coasters. It is a lovely city, and, as the locals will tell you even without you asking, it is supposedly in the sunniest part of New Zealand.

Since they moved there we have spent four Christmases with them, and a trip to the Southern Hemisphere in late December is indeed a holiday treat in itself. We have spent time on the North Island, the South Island, and several of the other islands in the archipelago that calls itself New Zealand. Some of the place we saw were the standard tourist stops (Auckland, the Southern Alps, Wellington), others were more idiosyncratic (wildlife sanctuaries and coastal towns with interesting opportunities like birdwatching trips or penguin colonies).

Lots of folks go to NZ to see Lord of the Rings sites or trivia; others go for the adventuring venues like spelunking, fishing, or bungee jumping. We did none of those; if you were hoping to hear about that sort of thing, there are other venues. So here are five OTR posts with my photos and commentary about the parts of that beautiful country that I have visited and even re-visited. I hope you enjoy them, and I urge you all to find a way to get to New Zealand if you can, no matter what attractions you wish to visit there. Here is a map showing all the places mentioned in this post.

Today’s post is about the native landbirds of NZ. You may not know this, but the landmass that would become New Zealand split off from Gondwanaland before the extinction of the dinosaurs, and mammals at that time were small and rare. None of them survived in New Zealand; the only land mammals are three species of bats. The descendants of the dinosaurs that we know as birds filled all of the available niches, and, in a land without mammalian predators, evolved in interesting ways.

Many nested on the ground. Many were flightless. Many have a detectable odor, which would be disadvantageous if olfactorily-adept predators were around. Many were huge. All of which became immediate disadvantages when the Maori arrived, only 800 years ago. So a lot of them are now extinct, either at the hands of the Maori or the later European arrivals, and many as a result of the introduction of rats, cats, stoats, and other mammalian predators. Although depleted by these extinctions, the avifauna is rich, unique, and a great attraction for birders and biologists around the world. 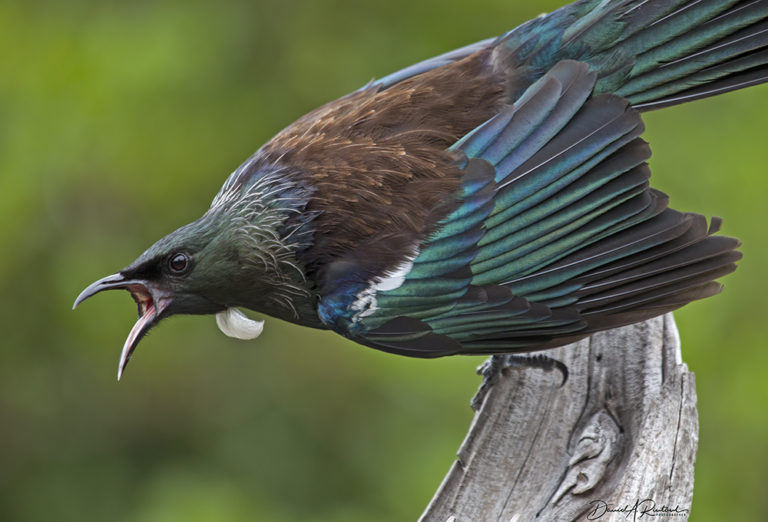 It would be hard to pick an iconic bird for New Zealand, but this one, the Tui (Prosthemadera novaeseelandiae) might be at the top of my list. It is endemic to NZ, and the only species in the genus). It is a honeyeater, dependent on nectar from flowering plants, and is found throughout the country in areas both urban and rural. Loud and attention-getting, unlike most New Zealanders, this one was defending its territory from a juvenile interloper on Tiritiri Matangi Island, a wildlife sanctuary in the Auckland area.