You are here: Home / Archives for Politics / Trumpery / Dolt 45

A missive from our President:

Like every American, I deserve to meet my accuser, especially when this accuser, the so-called “Whistleblower,” represented a perfect conversation with a foreign leader in a totally inaccurate and fraudulent way. Then Schiff made up what I actually said by lying to Congress……

His lies were made in perhaps the most blatant and sinister manner ever seen in the great Chamber. He wrote down and read terrible things, then said it was from the mouth of the President of the United States. I want Schiff questioned at the highest level for Fraud & Treason…..

In addition, I want to meet not only my accuser, who presented SECOND & THIRD HAND INFORMATION, but also the person who illegally gave this information, which was largely incorrect, to the “Whistleblower.” Was this person SPYING on the U.S. President? Big Consequences!

These Radical Left, Do Nothing Democrats, are doing great harm to our Country. They are lying & cheating like never before in our Country’s history in order to destabilize the United States of America & it’s upcoming 2020 Election. They & the Fake News Media are Dangerous & Bad!

James Risen overheard Jay Sekulow, the President’s personal lawyer who probably will have to be Rudy’s cleanup brigade, in a green room. They’ve lost control of the narrative, and they’re frightened.

A moment or two later, Sekulow added: “He’s going all around town, stirring things up. It’s not helpful.”

END_OF_DOCUMENT_TOKEN_TO_BE_REPLACED

BREAKING: Here's the 218th lawmaker to support an impeachment inquiry (217 Dems plus Amash). This puts a majority of the House on record in support.https://t.co/3RIKRLxnic https://t.co/KWCHpQdazA 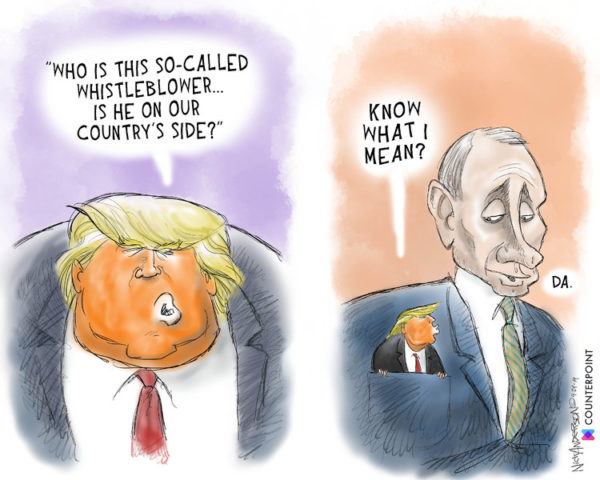 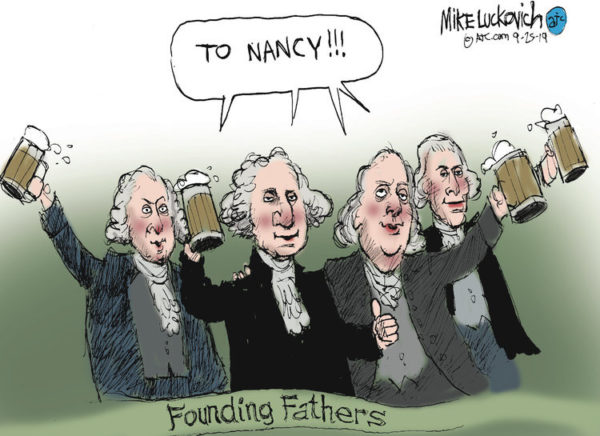 END_OF_DOCUMENT_TOKEN_TO_BE_REPLACED

Presumably they will update as more documents are generated.

The story in these three documents:

We support the bi-partisan, unanimous resolution passed by the Senate regarding our client’s lawful whistleblower complaint and call upon the Acting Director of National Intelligence to transmit the complete disclosure to the two Intelligence Oversight Committees.

The letter to the DNI states that the whistleblower intends to contact the Congressional committees directly and asks for the guidance prescribed by law from the DNI.

The DNI’s letter, signed by the Office’s General Counsel, leans on the previously-stated fact that the complaint includes potentially privileged communications with people outside the Intelligence Community to delay thing. They are consulting with other government agencies.

SCOOP: The White House is preparing to release the whistleblower complaint + IG report to Congress by the end of the week, per a senior administration official. POTUS has signed off on it — for now: https://t.co/dy7v5DqxZ1

Open thread. [Regrets to Watergirl – I have added a new category.]

END_OF_DOCUMENT_TOKEN_TO_BE_REPLACED

There are at least two things going on in what we might call the whistleblower saga. I got confused by them last night, so let me try to clarify them for myself and whomever else might be confused.

More specifically, a telephone conversation that included a promise to a foreign leader was said to be part of it. Initial speculation centered around Vladimir Putin and possible sharing of information about agents inside Russia. Then we were told that the country involved was Ukraine and its new president, Volodymyr Zelensky.

There was a great scramble to find recent news about Trump’s interactions with Ukraine, and a timeline suggested that Trump had withheld aid that Congress had voted for Ukraine until Zelensky agreed to find (or manufacture) dirt on the business dealings of Joe Biden’s son, Hunter. And there seems to have been an additional $140 million that went to Ukraine later.

This is where the story bifurcates. On the one hand, we have the whistleblower complaint, about which we know little. The reports of a promise and multiple interactions seem not to fit with what Giuliani and Trump have admitted to. The Acting DNI continues to (probably illegally) stonewall Congress.

On the other, we have the admission of the President and his lawyer that they were engaged in strongarming the new president of Ukraine to help them with Trump’s re-election campaign. This is clearly a misuse of power, a high crime or misdemeanor, suitable for a charge in impeachment. This is what the news has been running with.

Both stories are important, and different from each other. Trump’s Ukraine blackmail/ extortion/ soliciting campaign assistance from a foreign country did not come directly from the whistleblower complaint. It came from Trump and Giuliani’s admissions in response to speculation about what that complaint contained. Trump has (sorta, in his confusing way) offered a transcript of the telephone conversation, maybe redacted.

That’s not enough. The stories have become separate, but they are related at a fundamental level that has to do with Trump’s corruption. Congress must continue to investigate the whistleblower complaint and include the Ukraine connection.

Trump loves to confuse things, and that’s what he’s doing now. We’ve got to keep things clear in our minds.

Update: Profile of Michael Atkinson, the ICIG, “a straightshooter.”

END_OF_DOCUMENT_TOKEN_TO_BE_REPLACED

We’ve all been wondering about the subject of the whistleblower complaint being withheld by Acting DNI Joseph Maguire from the House Select Intelligence Committee.

Tonight, Washington Post has a hint for us. Twitter is exploding with speculation, and why should they be the only ones?

From Adam Schiff’s letter to Maguire, it can be surmised that the incident that provoked the whistleblower’s concern had to do with someone in the White House.

The whistleblower complaint that has triggered a tense showdown between the U.S. intelligence community and Congress involves President Trump’s communications with a foreign leader, according to two former U.S. officials familiar with the matter.

Trump’s interaction with the foreign leader included a “promise” that was regarded as so troubling that it prompted an official in the U.S. intelligence community to file a formal whistleblower complaint with the inspector general for the intelligence community, said the officials, speaking on the condition of anonymity because they were not authorized to discuss the matter publicly.

What was the “promise”? And which foreign leader?

Have at it. Here are some tweets.

JUST IN: The Acting Director of National Intelligence will testify publicly before the House Intel committee on Sept 26 in relation to the whistleblower complaint received by ODNI. The Intel community inspector general will testify in closed session tomorrow, per @RepAdamSchiff pic.twitter.com/wfTXjlh7MP

"The individual once worked on the staff of the White House National Security Council, which frequently borrows intelligence community personnel"https://t.co/AQPNQMRtFrhttps://t.co/kpkyDEl9Wg

What if the whistleblower complaint is not Sue Gordon but John Bolton?

The White House readout made mention of only Siberian wildfires and trade as topics of discussion. The Russians, as their tweet above suggests, came away think normalization of relations was on the table. ?

So, if this is a senior IC guy, he can't be filing over something the President has the right to do, like reveal classified info. I wonder if the "promise" contravened U.S. law, and thereby made it legit territory for a whistleblower complaint. https://t.co/2190Z5okLx

END_OF_DOCUMENT_TOKEN_TO_BE_REPLACED

The Friday night news dump was unusually late this week.

Adam Schiff, Chair of the House Permanent Select Committee on Intelligence, wrote a letter to Joseph Maguire, Acting Director of National Intelligence. Read it – it’s short and to the point.

It looks like Schiff has also requested the material from Maguire. That would mean he heard about it through another channel, possibly notified by the IC IG.

His basis for not turning the material over is that

That describes people who are most likely to be trying to do something bad, like spies, and of course confidential information would be part of it. No point to whistleblowing on something that’s been in the news. “Potentially privileged” might suggest presidential communications. Like other legal arguments the administration makes, it boils down to “No, we don’t want to disclose and will use an utterly transparent excuse.”

Schiff puts all that together

Schiff wants the material by Tuesday, emphasizing that it is an urgent matter. If Maguire doesn’t come up with it, Schiff wants him in front of the committee by Thursday. He also says that the whistleblower had better be protected from reprisal. Good luck with that.

I can imagine a great many possibilities for the content of the complaint, but that’s because there is so little information and the administration is so corrupt.

Next week should be interesting.

END_OF_DOCUMENT_TOKEN_TO_BE_REPLACED

So, this image showed up in my messages: 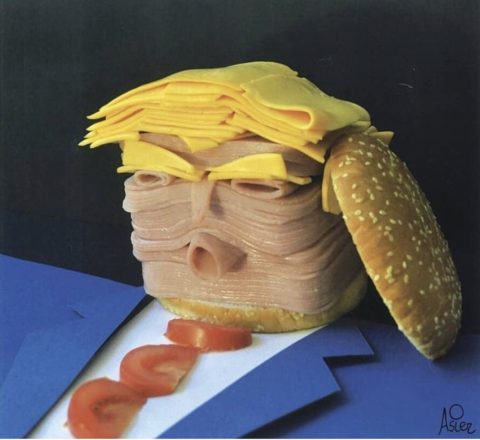 I’m just hoping this isn’t a Betty Cracker creation already featured here that in my semester-starting-addled brain I somehow forgot.

Anyway: here’s a chance to talk about anything to do w. abuse of or abusive foodstuffs — or anything else that whets your appetite.