You are here: Home / Archives for Politics / Trumpery / Trump-Russia

The White House and Wingnut Wurlitzer chorus are still singing from the “Hillary Clinton did the real Russia collusion” hymnal, as if Mueller Monday never happened. Trump, Huckabee-Sanders, Fox News, etc., are still yapping about emails, uranium, blah blah blah. If anyone pulls that bullshit on you, Joy Reid shows how to shut that person all the way up:

Watch the brilliant @JoyAnnReid shut down this RNC spokesperson on the bullshit Hillary/Uranium One conspiracy pic.twitter.com/G5vnMmCf2e

Reid produces a pile of receipts, arranges them just so around that woman’s specious argument, lights them on fire and burns that bullshit distraction to the fucking ground. It’s a thing of beauty and a joy forever.

END_OF_DOCUMENT_TOKEN_TO_BE_REPLACED 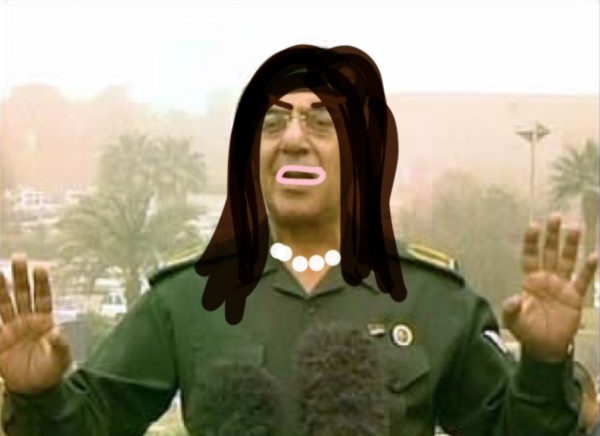 Team Trump is so incompetent that it’s impossible to tell if they’re truly blindsided by events or just acting as a group of stupid people would in response to circumstances for which they’ve had time to prepare. But man, Huckabee-Sanders looked even more pole-axed than usual at today’s briefing.

I’ve not allowed allowed myself to hope that the Mueller investigation could take Trump down. Pessimism still seems the wisest policy. But it does sorta feel like the whole rotten edifice is tottering.

END_OF_DOCUMENT_TOKEN_TO_BE_REPLACED

Some choice quotes for those who can’t / won’t watch the video:

“Nothing that he said in his tweets today was truthful… I would hope the staff over there would figure out ways of controlling him when they know that everything he said today was untruthful.”

“It’s amazing. Unfortunately, I think world leaders are very aware that much of what he says is untrue. Certainly people here are because these things are provably untrue. I don’t know why he lowers himself to such a low, low standard and debases himself the way he does, but he does.”

“The president has great difficulty with the truth. On many issues.”

“We’re going to be in our hearing process addressing the fact that he with only the one other person on the defense side has tremendous powers [i.e., nuclear launch capabilities]… I expressed concerns a few weeks ago about his leadership, stability and lack of desire to be competent on issues…”

Corker also said he wouldn’t support Trump for president again. And I suppose it’s a good thing that he’s speaking out now, if only on the infinitesimally small chance that it might inspire other Republicans to sack up (haha — not gonna happen!).

But hearing those remarks also makes me want to grab the (liddle’) sumbitch by the shoulders and shake him until his teeth rattle. Exactly what part of Trump’s mean-spiritedness, instability, incuriousity, incompetence and mendacity wasn’t blazingly obvious all along?

Corker says “debasement of the country” will be Trump’s legacy. Enabling Trump will be Corker’s.

END_OF_DOCUMENT_TOKEN_TO_BE_REPLACED

We’ve got our own oligarch problem. While Trump has thus far proved too soft and stupid to replicate a Putinesque regime on American soil, it hasn’t been for lack of trying or scarcity of resources. In addition to the Republican Party, Trump has American oligarchs in his corner, including Robert and Rebekah Mercer.

The Mercers, along with Steve Bannon, are investors in Cambridge Analytica, the shady data company that played a role in Russian interference in the 2016 election. Mr. Mueller’s team and the congressional committees are investigating.

The jury is still (technically) out on whether the Mercers colluded with a hostile foreign power to swing the election. But earlier this month, BuzzFeed exposed the Mercers as direct funders of Nazi and white supremacist outreach on behalf of Trump and the Republican Party, via Bannon and his repulsive henchman Milo at the Breitbart hate site.

These Nazi-linked American oligarchs are continuing to amass wealth and influence, largely under the radar — and some of our most well-known institutions are helping them do it via a hedge fund called Renaissance Technologies. Jedd Legum and Danielle McLean at ThinkProgress published a terrific piece yesterday about “RenTech” and how foundations, public sector pensions, scientific institutions, etc., are funding white supremacy, whether they know it or not. An excerpt:

Neither Mercer’s involvement in Breitbart, nor his support for Yiannopoulos, nor charges of discrimination, have appeared to negatively impact his business. Renaissance Technologies now manages $45 billion in assets, up from $27 billion at the start 2016, according to Forbes. Outside investors pay a hefty fee for the privilege of accessing a Renaissance fund and a good deal of that money ultimately ends up in Mercer’s pocket.

The identity of Renaissance’s investors has largely remained secret. The company is not obligated to disclose their clients, who are generally required to invest at least $25 million. ThinkProgress, however, has been able to identify numerous investors in Renaissance by identifying institutions that, either voluntarily or by law, disclose how they invest their money. This includes reports from public pension plans, non-profit filings, and university endowment reports.

Here are the 10 RenTech investors ThinkProgress revealed in the piece:

When I was a college student back when dinosaurs roamed the earth, anti-apartheid activists took on universities, pressuring them to divest from US-based multinational companies with South African holdings. Shouldn’t companies run by American oligarchs with Nazi ties get the same treatment?

It’s likely the institutions ThinkProgress revealed as RenTech investors had no idea they’re helping to inject Nazism and other flavors of white nationalism directly into the bloodstream of one of our two major political parties, thus undermining American democracy itself. Well, now they know, and it’s time for them to choose a side.

END_OF_DOCUMENT_TOKEN_TO_BE_REPLACED

KKKeebler Elf brings his outraged honor act to the Senate Judiciary Committee — for an audience of one. Senator Franken isn’t taken in by the moonlight and magnolias act:

"We're moving the goal post every time." The full heated exchange between Franken and Sessions (via ABC). pic.twitter.com/PijoXBvpQ3

Franken rightly calls the pint-sized bigot out for moving the goal posts on campaign collusion with Russia in the 2016 election, which is what Team Trump has done from the beginning. First, they were all, “Russians? What Russians?” Then, they said, “Okay, some operatives may have talked to Russians, but no one close to the campaign.” Next, it was, “Well, not every single surrogate talked to the Russians.” And finally, “How dayuh you impugn mah honah, suh?”

Good God, what a clown show.

END_OF_DOCUMENT_TOKEN_TO_BE_REPLACED

Guys, I’m starting to think there’s something to this Trump-Russia business…

Anyone want to start a pool on which Trump operative will be busted for collusion first? My money’s on Parscale, the digital director who raked in $90M. Just a hunch.

END_OF_DOCUMENT_TOKEN_TO_BE_REPLACED

The New York Times has the latest scoop:

WASHINGTON — Robert S. Mueller III, the special counsel, has asked the White House for documents about some of President Trump’s most scrutinized actions since taking office, including the firing of his national security adviser and F.B.I. director, according to White House officials.

Mr. Mueller is also interested in an Oval Office meeting Mr. Trump had with Russian officials in which he said the dismissal of the F.B.I. director had relieved “great pressure” on him.

The document requests provide the most details to date about the breadth of Mr. Mueller’s investigation, and show that several aspects of his inquiry are focused squarely on Mr. Trump’s behavior in the White House.

I know, I know, Fitzmas, blah blah blah. Still, I hope the ochre ogre is sweating it out.

Also, MAGAts in Florida and elsewhere served as Putin’s pawns, lured to Trump rallies via Facebook pages created by Russian troll farms. Courtesy of valued commenter Rikyrah, here’s a link to a Washington Monthly piece that summarizes the reporting on that.

So, to sum up, Mueller is examining Trump’s obstructive behavior in the White House, and reporters are uncovering incidents where Russian trolls led idiot Americans around by the nose with the intent to install Putin’s preferred candidate. My guess is this Facebook thing is just the beginning and that other shoes will drop in the social media realm.

Do we have the national will to do something about it? That’s really the only question that remains.