You are here: Home / Archives for Politics / An Unexamined Scandal

The Center for Responsive Politics has taken a look at lobbying expenses for 2009 and found that we have a new record. $3.47 billion was spent by 13,741 registered lobbyists to lobby the Congress in 2009. In 2008 $3.27 billion was spent. And this is only the spending for those folks who have to register under the extremely weak Federal lobbying disclosure laws. Billions more have been spent by PR firms, think tanks, front groups, shadow groups and other entities and individuals operating with carefully designed work-plans crafted to escape oversight and disclosure.

The recent Legislation enacted by the Bush/Roberts Court will flood the zone with even more money. This is another indication of just how deep in the shit our Democracy finds itself in these days.

It has been almost six years since the Abramoff scandal broke on the front page of the WaPost. The story was followed for a while, but now it is just old news. Except that it isn’t. The system of corruption that Jack Abramoff helped to build is as strong today as it ever was. All the scams that Jack used to run are still being run today. The only difference is that Washington is now filled with “Baby Jacks” running these cons. And this corruption is a bipartisan project–perhaps the only bipartisan project that functions inside the beltway.

The Abramoff scandal is a Rosetta stone of how the system of lobbying, money laundering and influence works in Washington. This scandal needs to be examined and expose if we hope to reclaim our democracy from those who seek to bleed it dry.

There are Millions and millions of pages of Abramoff related documents, emails, testimony and other evidence that have been gathered by the DOJ. Another 750,000 pages of documents were gathered by John McCain and then sent to the National Archives to be swept under the rug of history. In these documents is a clear road map of how “legal” lobbying works in Washington. As some wise folks have observed, the worst part of the Abramoff scandal are all the things he did that are legal .

It is time to demand some action by Congress when it comes to out-of-control bribery (also known as lobbying). The measures put in place in the wake of the Abramoff scandal were only designed to deal with the low hanging fruit–the most obvious examples of pay for play. Everything else was left in place.

It is time to demand that Congress does its job.

A Member of Congress (especially on the Oversight and Government Reform Committee) or a Senator could launch an investigation into the Abramoff scandal and use this mountain of documents to expose the system of lobbying. Such a report could lead to stronger disclosure laws and an expansion of the definition of a “lobbyist”. It would also help if Congress gave prosecutors new laws and tools to help convict corrupt lobbyists, staffers and elected and appointed officials. As things stand right now most crimes of lobbying are “legal”.

And the Bush/Roberts Court is working on new Legislation from the bench to weaken and obstruct the current laws on the books that have been used in most prosecutions of public corruption over the last thirty years. Think of it as companion Legislation for the Unlimited Corporate Money Bill the Court enacted a few weeks ago.

If you divide the money spent by lobbyists last year it comes to about $11 for every Citizen of America. Most of us are not seeing any benefit for that. Ponies are not in the mail.

If one wants to focus on the root of dysfunction in Washington, you have to look at lobbying. The Executive Branch under President Obama has put in place the toughest rules and the most transparent disclosure of lobbying contacts in the history of America. While this is great news, it will matter very little if Congress does not act to clean-up its own rules and pass real lobbying reform laws.

And as the most activist Court in American history continues to legislate from the bench, Congress needs to act to protect its right to make the laws of the land from the rogue Bush/Roberts Court.

We live in interesting times.

END_OF_DOCUMENT_TOKEN_TO_BE_REPLACED

The pro-corruption caucus never rests and it rewards their foot soldiers with work through the many brushes with the law that they have.

A good case in point is Susan Ralston. She was Jack Abramoff’s secretary/confidant and gate-keeper for years. Then she went to work in the same role for Karl Rove (and serve as an important member of Team Abramoff in the White House. Here you can see a photo of Susan with Jack and many members of the gang (she is the one sitting in front of Jack). Most folks in that photo have either had charges filed against them or are still under investigation. Susan falls into the latter category. It was only last August when the Department of Justice named her as a co-conspirator in the Abramoff Scandal.

To say that she is under a cloud of suspicion would be an understatement. And yet, Republicans are more than willing to hire her to raise money for them and organize their affairs. The St. Petersburg Times reported yesterday that Ralston is the point of contact for a major GOP fundraiser for seven Republican Candidates for Senate this year. Here is the invite: 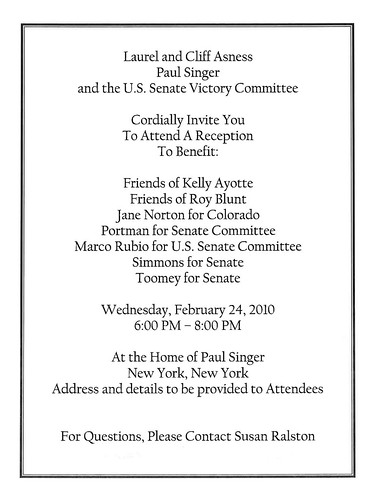 It looks like the corruptionist wing of the Republican Party is getting the band back together. This kind of fundraising work was always a big part of what Jack did for the GOP so it is not a surprise that Ralston has started a DC-based firm to do the same.

I guess it is something to do while you’re being investigated by the Feds and waiting for your plea deal/indictment to drop.

ps: feel free to treat this as an open thread.