You are here: Home / Archives for Politics / Biden Administration in Action

Just when I thought he couldn’t top the last one, Raskin goes right at Massie and his dumb ass Ray Epps conspiracy. pic.twitter.com/RC2vD1arBb

Massie got a degree from MIT; he’s not dumb enough to believe that Ray Epps was a mastermind double agent, instead of just another hapless middle-aged authoritarian out of his depth. Massie and his cronies are desperately flinging spaghetti (with ketchup) at the walls, hoping that something will stick — or at least provide enough of a distraction they can escape in the ensuing chaos.

Back among the sane people:

Under temporary changes made by the Biden-Harris Administration to the Public Service Loan Forgiveness program, it’s easier than ever for public servants – including veterans and servicemembers – to get loan forgiveness.

Another job for the internet defense squads!

Details of the Senate legislation 👇

It’s headed for committee markup next week. Unclear when a floor vote would be but the expectation is lame duck.https://t.co/QpHGqoNHuU

95% of Republicans oppose making coups harder, which is both not surprising and also very distressing https://t.co/bvV83HrjrH

Please, Murphy, let this be a overdue, party-wide extinction burst…

END_OF_DOCUMENT_TOKEN_TO_BE_REPLACED

If she is announcing that it’s her birthday or that she is stepping down or that they are dropping their investigation into Donald J. Trump, I am going to regret taking the time to add all those colors above!

I am guessing that we will hear something from him about Ukraine?  Will he also talk about the threat to democracy here at home and the threat of autocracies all over the world? I would like to see him do that.  Anyone think he will?  What do you think he will say besides America’s back, baby!

END_OF_DOCUMENT_TOKEN_TO_BE_REPLACED

Vice President Kamala Harris is visiting two historically Black colleges in South Carolina to push for voter registration. She’s focusing on places and demographics that will be key to Democrats’ chances to hold on to Congress in midterm elections. https://t.co/ekfEbYAUK1

Borrowers who paid down their student loan debt during a pandemic freeze that started in March 2020 can in fact get a refund, and then apply for forgiveness.

If you think you’re eligible, here’s what you need to know. https://t.co/gnwijORDTy

NEW: Cheney & Lofgren unveil their 38-page Presidential Election Reform Act to overhaul the laws on counting electoral votes and to prevent another Jan. 6.

The comment at the end is important: As Cheney notes, a member filing an objection knowing it's false is an unconstitutional act. https://t.co/DkhPO2Ex8x

END_OF_DOCUMENT_TOKEN_TO_BE_REPLACED 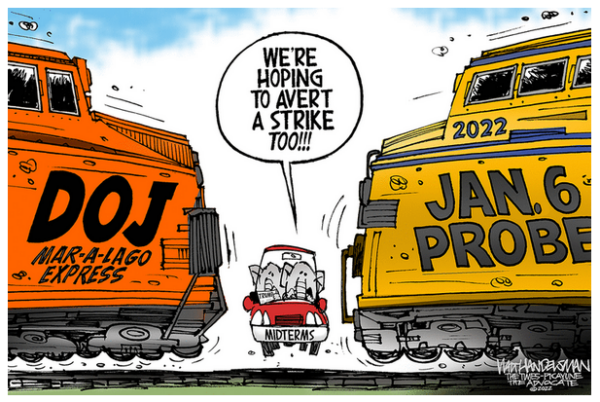 Ohana: Nobody gets left behind, or forgotten…

The MAGA Republicans believe that for them to succeed, everyone else has to fail. I believe America is big enough for all of us to succeed, and that is the nation we’re building: a nation where no one is left behind.

I got to be the third Property Brother for a day and talk with @MrDrewScott and @JonathanScott about why we’re excited about the Inflation Reduction Act. It’s going to lower costs for families and combat the climate crisis. pic.twitter.com/gx7M8xSywD

Feels like we can say now that there was no real backlash to (at least) modest student debt relief, everyone’s forgotten about it unless it effected them and if it did it made you like Biden. Seems like a win. https://t.co/5ESSIVXtvr

You have the right to vote even if you don’t speak or read English. This guide will tell you about your right to ask for help, how to vote and what to do if you have problems.


If you want to share this info, tweets in the other ten languages available at the link!

END_OF_DOCUMENT_TOKEN_TO_BE_REPLACED


Another Biden admin guy who’s putting in the work:

With President Joe Biden insistent and the U.S. economy in the balance, there was no room for failure and no time for a traditional style of negotiations with rounds of document exchanges, he said in an interview.

“I wanted to get this deal done,” said Walsh, a former Boston mayor who canceled a trip to Ireland and speech to Irish legislators to broker the talks.

After more than two years of negotiations, railroads and unions faced a 12:01 a.m. Friday deadline to reach a contract and avoid a rail shutdown. That would cost the U.S. economy $2 billion daily by stranding critical goods, closing factories and paralyzing industries and travelers…

“I did not celebrate until I had initials on the document,” Walsh said. He called White House National Economic Council director Brian Deese to give him the good news early Thursday morning.

Walsh said it was a good contract for both workers and employers. He urged both sides to begin the next contract talks earlier to avoid a repeat of the last-minute negotiations.

Biden met with government officials, railroad and union leaders at the White House after the deal was announced and paid tribute to Walsh “for his tireless round the clock work.”

"Heavens to Betsy," exclaimed one railroad baron as his monocle dropped. "Days off for medical care without being subject to discipline?!" https://t.co/6SI0NkBels

@JStein_WaPo reports that Biden was personally animated about the lack of leave for railroad workers, and brought up that he did not understand why they could not be granted more flexible schedules.

So, in the same week that things seem to be turning around dramatically in Ukraine, a potential railroad strike in this country was threatening to cut the legs out from under the still-staggering supply chains and damage the general economy going into the extended holiday season. And you could see it coming: The Republicans would use a railroad strike to blunt the apparent momentum that the Democrats had derived from the Supreme Court’s radical destruction of reproductive rights. The elite political media, dedicated as always to its role as national racetrack touts, would play along. Republicans would force the president to choose: appear as a tool of the unions and, thus, play the scapegoat in an economic car crash; or lose a lot of his most valuable political capital, namely his close relationship with organized labor. It looked like a nifty trap for a party hamstrung by its cracker-factory roster of candidates.

The union still has to ratify the deal, but it also includes a mandatory cooling-off period if the union votes the agreement down, so a strike would not automatically ensue if the deal is rejected. However, after the events of the past seven years, avoiding a catastrophe ranks as an unalloyed triumph.

The railroad companies are moving towards a LOCKOUT.

There is not a single worker on strike on the US rails right now.

There *are* CEOs shutting down rail lines and withholding goods to shock Congress into forcing a deal on 100,000 workers. https://t.co/HDyEueQvLe

Some useful reading on the causes of the railroad strike, including Wall Street squeezing so much in profits out that it broke the industry and the miserable rise of "precision scheduled railroading."https://t.co/gmiHhhH3wOhttps://t.co/ntUc0Jczglhttps://t.co/793YtsSL6Q

Wow sounds like being in a union is pretty great, thanks Ben

END_OF_DOCUMENT_TOKEN_TO_BE_REPLACED

If you go to minus 2:45 or so, that’s the start of Susan Rice, Merrick Garland, and others.  And then Heather Hoyer’s mom and then President Biden.

END_OF_DOCUMENT_TOKEN_TO_BE_REPLACED

What a great idea!

Today, at the White House, President Biden is hosting the United We Stand Summit to counter the corrosive effects of hate-fueled violence on our democracy and public safety. The Summit will honor the resilience of communities who are healing from hateful attacks, including mass shootings, from Oak Creek to Orlando, Charleston, Pittsburgh, El Paso, Atlanta, Buffalo, and beyond.

The Summit will put forward a shared vision for a more united America, demonstrating that the vast majority of Americans agree that there is no place for hate-fueled violence in our country, and that when Americans stand united to renew civic bonds and heal divides, we can help prevent acts of hate and violence. Today’s Summit is just the beginning of this work, and every American has a role to play in this cause. Today, President Biden will rally a whole-of-society response to prevent, respond to, and recover from hate-fueled violence, and to foster national unity.

The White House is announcing a historic package of new actions the federal government, civic, faith, philanthropic, and business leaders will take to address hate-fueled violence and advance national unity:

The President will announce new agency actions to strengthen the federal government’s coordination and community engagement to prevent, respond to, and recover from hate-fueled violence.

Federal agencies are announcing new steps to strengthen the resources available to local schools, law enforcement agencies, and cultural institutions like museums and libraries to prevent and respond to hate-fueled violence.

Bipartisan former White House officials will launch Dignity.us, a Citizens’ Initiative to Address Hate-Fueled Violence in America, to foster dialogue in communities across the country and identify solutions to address hate-fueled violence. The Citizens’ Initiative will be coordinated by four former Directors of the White House Domestic Policy Council under Republican and Democratic presidents. The Presidential Centers or Foundations of Presidents Obama, George W. Bush, Bill Clinton, and Gerald Ford will support the initiative.

New Pluralists, a cross-partisan group of philanthropic and field leaders, is mobilizing $1 billion in new investments to increase support for programs that build bridges among Americans of different backgrounds to foster unity.
Compact to Combat Hate and Extremism, committing to stand up against hate-fueled violence and increase their support for local initiatives that heal divides.

Service organizations, led by Interfaith America, the YMCA, and Habitat for Humanity, are launching A Nation of Bridge Builders, a new partnership that will train 10,000 Americans to be bridge builders in their neighborhoods, and will host over 1,000 bridge building events in over 300 communities.

Technology companies, including YouTube, Twitch, Microsoft, and Meta are announcing new actions their platforms are taking to prevent hate-fueled violence.

At the Summit, the White House will also honor 16 “Uniters” from across America.

How it’s being reported.

Today, President Biden is hosting a White House summit aimed at combating the kind of hate-fueled violence that emerged at a gay nightclub in Orlando in 2016, a Walmart in El Paso in 2019 and a supermarket in Buffalo earlier this year. Aides said Biden will deliver a speech calling for a “whole-of-society” response at the United We Stand summit, where several new actions are expected to be unveiled, including some measures from technology companies to address hate-based content.

Madison energy entrepreneur Masood Akhtar is one of 21 Americans who are set to be honored at the White House this week for their work in uniting their communities.

The honor coincides with a “United We Stand” Summit at the White House on Thursday. That event “will bring together heroes from across America who are leading historic work in their communities to build bridges and address hate and division, including survivors of hate-fueled violence,” White House Press Secretary Karine Jean-Pierre said in a statement last month.

Akhtar founded and serves as the president of We Are Many-United Against Hate, which aims to bring people together to stand up to hate, prejudice and violence. Wisconsin Sen. Tammy Baldwin nominated Akhtar for the honor.

Channel 3000 (local man is one of the honorees)

President Biden will host a summit at the White House Thursday on combating hate-fueled violence.

The White House says the event, called the “United We Stand Summit,” will gather experts and survivors and will include bipartisan local leaders. It will also honor communities who have been through hate-based attacks, including the mass shootings that took place at gay nightclub in Orlando in 2016, at a Walmart in El Paso in 2019, where the assailant said he was targeting Mexicans, and the expressly racist shooting that killed 10 Black people in a Buffalo supermarket Buffalo earlier this year.

The program will include remarks by Vice President Harris, a presentation on the state of hate-based violence in the United States and a conversation with a former neo-Nazi who has since disavowed the white supremacist movement.