You are here: Home / Archives for Politics / Biden Administration in Action

Twitter needs to give its moderators a … But they’re fine! extension, to use whenever a public figure over a certain age is trending.

Jimmy Carter said: "A full investigation would show that Trump didn't actually win the election in 2016. He lost the election, and he was put into office because the Russians interfered on his behalf."
As did James Comey, who was investigating Trump but hid that from voters.

If you can’t remember another year when so many people went to work in this country, there’s a reason: it’s never happened before.

Last year was the biggest year for job growth in our history.

The hardships of the past two years are hard to overstate. But please know that our country and economy are in a much better place today. There is still more work to be done, but we are doing everything we can to prepare for a future beyond the pandemic.

His #InfrastructurePackage was the key 2nd step.

And the rest of his agenda could lift us even higher.#DemocratsDeliver pic.twitter.com/xgbM39cKjt

The Cook Political Report now forecasts that House Democrats are on track for a narrow net gain of seats from redistricting nationwide, amid a cycle that has proven far more favorable to Democrats than many expected. @CookPolitical

And on another front:

When Ketanji Brown Jackson’s daughter was 11, she wrote a letter to President Barack Obama suggesting her federal judge-mom fill a vacancy on the Supreme Court.

Jackson wasn’t nominated then. But she might have another shot. https://t.co/CSRFQAXrgQ

END_OF_DOCUMENT_TOKEN_TO_BE_REPLACED

Here’s the deal. Folks, this is not hyperbole, the #BidenBoom is real. https://t.co/Uc0nC4itCk

I like this framing, and think we need to do more of it!

In every media report on inflation, there is one BIG thing missing. Corporate profits as a % of total US income are at their highest level in decades. Prices go up because corporations can raise them, not for all the other reasons they state publicly. https://t.co/JJ65eQqmds

Fundamentalist Christians are imposing their morality on the rest of us with the help of utterly immoral fascists who care only about looting the nation.
Working together, they’re the Talibandits.

oh, i absolutely believe this, and i believe the counter is true as well, that low-engagement voters generally think that the democrats simply can’t be that much better at everything that the republicans are https://t.co/Ue3jUV10G3

if you offer someone the opportunity to critique your work (which is kinda sorta what an election does), they will find things to critique. a thing that republicans have gotten very successful at is simply refusing to offer any work to critique.

END_OF_DOCUMENT_TOKEN_TO_BE_REPLACED

Does anyone else have mixed feelings about the national prayer breakfast?

At least with President Biden and VP Kamala Harris attending the prayer breakfast I don’t have to wonder like I did during the former guy’s years – will the absolute horror and hypocrisy of it cause the earth to open up and attempt to swallow them whole?

President Biden Delivers Remarks on a Successful Counterterrorism Operation in Northwest Syria to Protect the American People and Make the World a Safer Place.

The remarks at the prayer breakfast is over.

END_OF_DOCUMENT_TOKEN_TO_BE_REPLACED

I suppose there’s room for two Commanders in this town. pic.twitter.com/xqlHzp6rq0

It’s one way to drive his enemies crazy…

Today, I’m proud to announce our plan to supercharge the Cancer Moonshot as a central effort of the Biden-Harris Administration.

Our goal is to cut the cancer death rate by at least 50% over the next 25 years.


More at the link:

Joe Biden plans several stops during a visit to Asia this spring, which will be his first to the region as president and include a summit with three key regional allies in Japan, a senior administration official told Reuters.

The official brushed off questions about whether the Ukraine crisis could distract the administration’s attention from Asia, saying: “We continue prioritizing our Indo-Pacific focus and will have more to come.”

The official, speaking on condition of anonymity on Wednesday, declined to give details of the other stops in the region, which Biden’s administration has declared its priority as it seeks to push back against China’s expanding power and influence.

U.S. officials have said Biden has accepted an invitation to visit Japan in late spring to attend the summit of the Quad, which groups Japan, the United States, Australia and India, but details were still being worked out.

A person familiar with the matter told Reuters on Tuesday the trip could be in May, with concerns over China and North Korea on top of the agenda, and that Washington was looking into having Biden visit South Korea at the same time…

Joe Manchin praised all five of President Biden’s nominees for the Federal Reserve, an important signal for their confirmations https://t.co/APxNnqXdfb

Be careful about storm conditions, everybody — especially you Texans:

50/50 odds that he recommends burning libraries for warmth https://t.co/SS5n3N9ypI

END_OF_DOCUMENT_TOKEN_TO_BE_REPLACED

“I intend to make this decision and get it to my colleagues by the end of the month — that's my hope,” Biden repeats in his Oval meeting with Grassley and Durbin on the US Supreme Court vacancy. https://t.co/fJufvDtG8s

Biden didn't discuss individual names for possible US Supreme Court picks with @SenatorDurbin and @ChuckGrassley in Oval today, the senators say–he just chatted about his hope that the process can be wrapped up in within about 40 days after the White House sends the nomination.

Former Senator Doug Jones will be the "sherpa" who will guide President Biden's Supreme Court nominee through the Senate, according to a person familiar, confirming @katierogers reporting. Biden had considered Jones for AG.

Psaki: Just over a year ago, the previous President also promised to select a woman for the Supreme Court. Not only were there no complaints for choosing a nominee from a specific demographic but there was widespread praise.. *reads statements from Ted Cruz* pic.twitter.com/r6qeSi5dSt

If I was a Louisiana voter I’d want a Senator who isn’t a total embarrassment https://t.co/LJRBUueQrh

woman who held 130 campaign events in NH and got 3% of NH primary vote is lecturing folks abt competence https://t.co/b9a6p2vKZa

END_OF_DOCUMENT_TOKEN_TO_BE_REPLACED

Continuing the not-so-great American tradition where Repubs break things, and Democrats come in to fix the mess as best as can be done… literally!

After decades, some of America’s most toxic sites will finally get cleaned up https://t.co/dYTMp7nRNk

A U.S. judge’s surprise decision this week to annul the Biden administration’s first Gulf of Mexico oil lease auction because of its climate change impact has raised questions about the future of the nation’s federal drilling program – and played directly into the president’s hand.

President Joe Biden, a Democrat, made a campaign pledge to end federal oil and gas drilling to fight climate change, and he quickly announced a suspension of all new lease sales pending a broad review of drilling’s impact on global warming after taking office. Some 25% of U.S. oil and gas production comes from federal lands and waters.

But this administration was later forced into the sale after several drilling states successfully sued in federal court in Louisiana. They argued that U.S. law requires the federal government to hold auctions on a regular basis to enhance energy independence and generate revenue…

This week’s ruling, from a judge in the District of Columbia who was appointed by former President Barack Obama, came after a challenge by environmental group Earthjustice. The judge vacated the auction entirely, saying the Interior Department failed to properly account for its impact on global warming.

Biden’s Interior Department must now do what it originally intended: take a fresh look at environmental and climate impacts of drilling. It has not yet said yet whether it will suspend other planned drilling auctions pending review, or how long the review will take…

Chevron CEO Michael Wirth, whose company was one of the high bidders in the Gulf of Mexico sale, said Chevron was reviewing the decision.

“We’re disappointed because these lease sales have been conducted successfully in the Gulf of Mexico for decades now and have resulted in us being one of the largest leaseholders out there with over 240 leases,” he said.

One’s heart just breaks at the thought of this man’s suffering, no? (No.)

Up to $43.7 million is headed to New Mexico to clean up abandoned oil & gas wells, protecting our environment & providing good-paying jobs.

END_OF_DOCUMENT_TOKEN_TO_BE_REPLACED 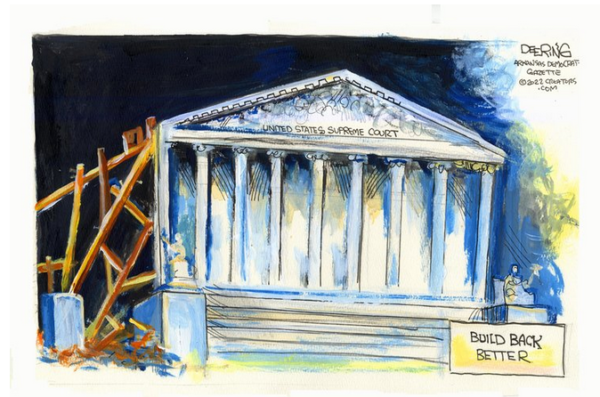 Full quote, because I missed he said "integrity": "The person I will nominate will be someone of extraordinary qualifications, character, experience and integrity."

Psaki says that anyone calling Biden's Supreme Court "extreme" before Biden has chosen her, "they just obliterated their own credibility."

"The fact that no Black woman has been nominated shows a deficiency of the past selection processes — not a lack of qualified candidates to be nominated to the Supreme Court," @PressSec says.

NBC News: Senate Democrats are aiming to confirm President Biden's Supreme Court nominee in a similar timeframe to the one Republicans used to confirm Amy Coney Barrett, who was confirmed just 27 days after her nomination. @NBCNews

Impact of the Georgia runoffs will be felt here. If Democrats didn’t capture both those seats, Mitch McConnell would get to decide whether Biden’s SCOTUS nominee is allowed a vote. Instead it’s Chuck Schumer who makes that call.

Whomever she is, she'll be a heck of a lot better than Coney Barrett.

I wonder if the same people bitching about Biden wanting to choose a Black woman – something long overdue – felt the same way about Reagan committing to a first woman or GHWB replacing Marshall with a Black nominee.
Note: I’m not actually wondering.

Reagan promised to name a woman during the 1980 campaign and did. Eisenhower chose Brennan because he wanted to win Catholic Democratic votes in 1956. It's always been a coalition-building tool. https://t.co/hiio2DOZmW

Setting aside the treatment of Ed Whelan here as a serious person, if you’re a New York Times reporter, before you cite something like this as a good or smart or relevant point I implore you to think for two fucking seconds about why this might be the case https://t.co/HBnNNmz4vC pic.twitter.com/vZucZtGpIn

Amy Coney Barrett never tried a case to a verdict. Not once.

Who was one of her biggest cheerleaders to get on the Supreme Court?

I'm sorry, I wasn't aware that ads were placed in the papers for SCOTUS justices.

The job of Supreme Court justice is hard. When Breyer retires, Biden should replace him with five people.

Every liberal account with 50 followers right now: Biden is going to pick one of these two highly qualified Black women.