Both Sides Do It!

You are here: Home / Archives for Both Sides Do It!

Wonder if he owned a liberal hunting license:

A California man accused of threatening to kill Seattle Congressman Jim McDermott has been arrested and charged in federal court.

Charles Turner Habermann — a 32-year-old Palm Springs, Calif., resident with a $3 million trust fund — was arrested Wednesday morning on allegations that he made threatening phone calls to the office of the Seattle Democrat late last year.

“He said he was trying to scare them before they spent money that didn’t belong to them,” FBI Special Agent Dean Giboney told the court.

“Habermann stated that he never had any intention of hurting anyone,” the agent continued, “and that he had too much to lose — referring to his $3 million trust fund — to ever do anything which could get him sent to prison.”

Habermann also disparaged Democrats for their views on tax cuts and unemployment insurance, according to the statement. Habermann is alleged to have threatened to kill McDermott in an effort to interfere with his vote on the tax cut proposal in December 2010.

A McDermott staffer contacted the FBI on Dec. 10, reporting that the congressman’s Seattle office had received the offending phone calls.

In one, the caller was heard calling McDermott “a piece of human filth,” “a communist,” and a “piece of (expletive) garbage.”

“Thomas Jefferson, James Madison, or George Washington, Alexander Hamilton, if any of them had ever met uh, uh Jim McDermott, they would all blow his brains out,” Habermann said in the first rambling message, according to charging documents. “They’d shoot him, in the head. They’d kill him, because he’s a piece of, of, of disgusting garbage.

Oddly enough, I thought every trust fund baby bitching about unemployment insurance wrote for the National Review. Guess I was wrong about that.

And, in fairness, I yelled at a Comcast operator a couple years ago, so it is important to recognize that both sides do it.

END_OF_DOCUMENT_TOKEN_TO_BE_REPLACED

Saw this one coming, too:

As soon as I saw the phrase uttered in the WSJ by the Instapundit and then immediately tweeted by Republican operative Jon Henke, I knew this was the new “beclowned” or “liberal fascism.” Remember, words mean what ever wingnuts want them to mean- that is how it works when you are creating your own reality.

END_OF_DOCUMENT_TOKEN_TO_BE_REPLACED

As I documented at length this weekend, Michelle Malkin, John Hinderaker, Red State, David Horowitz and many others of that sort spent the weekend engaged in the most vicious and self-evidently misguided attacks on The New York Times based on a puff piece in this weekend’s “Escapes” section. Because the article contained a photograph of Don Rumsfeld’s vacation home, they insisted that this was reckless and even retaliatory– i.e., done with the intent to enable Al Qaeda operatives and other assassins to murder Rumsfeld (as well as Dick Cheney), and that it was further evidence of the war being waged by the NYT and its employees on the Bush administration and the U.S.

For so many obvious reasons, based on easily obtainable information — including the fact that multiple right-wing news outlets such as NewsMax and Fox and others had previously disclosed this same information months earlier, that this information is commonly reported about government leaders in both parties, and the fact that we always know where our top government officials live and spend their weekends because they have Secret Service protection — these accusations were as false as they were hysterical.

That, of course, led to them doing the following:

This weekend, prominent neoconservative David Horowitz proclaimed that the United States is fighting a war and “the aggressors in this war are Democrats, liberals and leftists.” In particular, he cited the now infamous NYT Travel section article on Dick Cheney and Don Rumsfeld’s vacation homes as evidence that the employees of the NYT are among the enemies in this war, and he then linked to and recommended as a “proposal for action” this post from his associate, Front Page contributor Rocco DiPippo. The post which Horowitz recommended was entitled “Where Does Punch Sulzberger Live?” and this is what it said:

I issue a call to the blogosphere to begin finding and publicly listing the addresses of all New York Times reporters and editors. Posting pictures of their residences, along with details of any security measures in place to protect the properties and their owners (such as location of security cameras and on-site security details) should also be published.

Good times. Just thought that was worth remembering that publishing an aerial shot of a house is a call to violence now that I have learned this week that it is completely inappropriate for people to be upset about violent rhetoric and crosshairs over politicians after one of the targeted politicians is almost assassinated by a deranged lunatic. Normal people might think this is reasonable, even if the assassin wasn’t directly motivated by said rhetoric. It’s just the sane way to look at things, or so I thought. I’ve also learned, interestingly enough, that opponents of gun violence have a moral obligation to just shut the fuck up about gun violence whenever there is… horrible gun violence. Additionally, I’ve discovered that when you say “We need to tone things down a bit and tamp down the violent rhetoric,” you are actually launching a full frontal assault on Republicans. Who knew?

I try to keep up on the rules of discourse, but it is so hard these days. On the upside, at least the shooter didn’t do something really horrible, something that might have sent the right-wing into a full-on frothing tizzy. Something like say “putting lipstick on a pig.” If that shit had happened, Republicans would be calling for apologies and more civil discourse. As it is, he only put a bullet in a Democrat, and it is totally unreasonable to look around at violent imagery and rhetoric and tell people to stop it. Because shooting liberals, as we know, is no big deal: 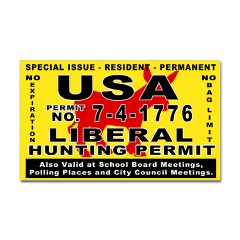 Provided the right paperwork, of course.