Bring On The Meteor

You are here: Home / Archives for Bring On The Meteor

And here I was, all ready to write about how Benjamin Netanyahu’s call for early elections in September meant A) he didn’t have the domestic backing to lob bunker busters in the general direction of Tehran and B) he was rolling the dice in order to try to get a better result.  Turns out I was right in a sense.  He just bypassed the whole early elections and democracy thing on the way.

The move came as the Knesset was preparing to disperse for early elections, which were expected to be scheduled for September 4.

Under the agreement, Kadima will join Netanyahu’s government and commit to supporting its policies through the end of its term in late 2013. Mofaz is expected to be appointed deputy prime minister, as well as minister without portfolio.

Mofaz will also serve as a member of the security cabinet, and Kadima members will serve as chairmen of the Knesset foreign affairs and defense committees, the economics committee, and any others that are agreed upon by both sides.

Mofaz ousted former Kadima head Tzipi Livni a couple weeks back as head of the opposition.  Ambitious doesn’t begin to describe the guy, apparently.  Now thanks to Mofaz, Bibi is holding all the cards and the rest of his coalition government can suck it.  Dice were loaded all along.

So the question now is what will Bibi do with his new instant majority government?  We know what Mofaz is getting out of it.

As talk of early elections heated up in recent weeks, polls have shown Kadima losing significant strength, winning perhaps a dozen seats rather than its current 28, a clear incentive for Mr. Mofaz to make the unity government deal. Several other centrist and left-leaning parties would have each won about a dozen seats, according to the polls, leaving a divided opposition that would likely only have increased Mr. Netanyahu’s power and hold on the government.

Plus he’s now Bibi’s right hand man and Vice Minister.  And as such, Netanyahu now has free reign to do whatever he wants for the next 18 months or so.  I actually have to hand it to the guy, this is a pretty epic win on his part.  Opinions differ on what Bibi will do with his new power but nobody’s disputing he has it.  Somewhere, a bunch of Republicans are looking into how to pull this off here.

I’m sure this will end well for everyone involved.  Yep.

END_OF_DOCUMENT_TOKEN_TO_BE_REPLACED

Remember, America doesn’t have a right-wing domestic terrorist problem.  We have a long string of completely unrelated “mass shooting” events where gunmen declare that various minority groups or random bystanders are the enemy and kill a bunch of them seemingly out of the blue in an attempt to strike fear into the hearts of millions and/or to force political change through bloodshed, but since these folks are FOX News viewers, it’s just “unfortunate” when this happens every couple of months or so.   Meanwhile, the real terrorists are the New Black Panther Party because OOGA BOOGA BLOOGITY BLACK.  Cue the scary chyron, folks.

Longtime white supremacist and border vigilante JT Ready saw himself as part of a war that few others would fight. He amassed weapons. He donned a uniform. He formed his own brigade of volunteers to walk alongside him as he hunted what he described as “narco terrorists” flowing across the Arizona-Mexico border.

On Wednesday, reports out of Arizona said Ready died, not at the hands of drug runners, but with his own gun during a mad rampage inside a suburban home just east of Phoenix. Along the way, the reports said, he took the lives of four other people, including a toddler.

The Arizona Republic reported the victims were Ready’s girlfriend, her daughter, the daughter’s boyfriend and the daughter’s 18-month-old baby. Ready still somehow managed to use the event to blame immigrants even after his death. A posting on his Facebook page appeared hours after the massacre took place.

“Reports are unconfirmed that a cartel assassination squad murdered JT Ready and several of his friends and family this afternoon in Gilbert Arizona,” the posting said. “This page’s admin will keep you updated of the situation as soon as possible.”

Don’t dare call them racists, don’t dare say we need law enforcement to look into the militia and white supremacist movements, don’t dare point out the people going on shooting rampages are not young urban minorities, don’t dare point out how easy it is to get firearms and ammunition in this country,  don’t dare point out the people who actually are mounting up for a shooting war in our midst, because you should really be worried about the fellow down the street with the different religion or no religion at all or the unarmed black kid with the hoodie or the dirty effing hippie Occupy protester on the street corner or the Latino family driving along the border state highway or the people who want marriage equality for their loved ones, or the woman who wants to get rid of the fetus she’s going to be unable to care for in six months.

These people, I am told, are the terrorists among us who will kill people, and not REAL ‘MURICANS like JT Ready.  And man, this one stomps on all the asshole buttons, he gets all this hardware to play Metal Gear Solid on the border to shoot him some brown people because he has to protect the white way of life, and in the end the person who was the greatest threat to his loved ones was JT Ready him-goddamn-self, who took the chickenshit way out and punched his own clock after murdering a toddler.  Now that’s freedom, my droogies.

America, you need a good swift kick in the ass.  Here’s hoping this wakes up the somnambulant among us.

[UPDATE]  And let’s be clear here, this asshole apparently had a plan that consisted of A) kill his family, B) then kill himself in order to C) make it look like The Great Brown Horde offed him so D) he’d be some sort of white supremacist martyr and his angry nutjob buddies would E) then start a race war in Arizona.   He’s not just a terrorist, he’s a complete “New branches of mathematics are necessary in order to sufficiently quantify how evil this asshole is” type of terrorist. [UPDATE, THE SECOND]  But didn’t you know that Ready was secretly a far-left dirty hippie Occupy protestor?  I know because the Dumbest Man In Saint Louis said so.

END_OF_DOCUMENT_TOKEN_TO_BE_REPLACED

Paul Krugman and Ron Paul, arguing over whose policy cuisine reigns supreme. It’s worth a gander.

This could lead to a fighting or a challenge. Ron Paul repeatedly uses Get Your Socialism Off My Lawn from his stump speeches where he’s still running for Dwarf-in-Chief of Lost Carcosa (he’s short, cranky, good at digging himself into holes and obsessed with obsolete relics and gold), but Kroog’s Mighty Beard Tentacles invade the argument with sanity at several points throughout and he’s clearly having none of Ron’s crap, pointing out that Diggy Diggy Hole’s arguments here have been applied in the real world through austerity cuts and the results have been kind of poopy.

END_OF_DOCUMENT_TOKEN_TO_BE_REPLACED

… but the politically engaged conservatives mostly are. Thomas Edsall, at the NYTimes, on “Finding the Limits of Empathy“:

… Ravi Iyer, a post-doctoral researcher at the University of Southern California who analyzes the differences in the moral outlook of conservatives and liberals, has posted an exceptionally interesting collection of data on his “Politics and Moral Psychology Blog.” (Iyer’s research is reinforced by the work of Philip E. Tetlock at Wharton and Linda J. Skitka of the University of Illinois.)… 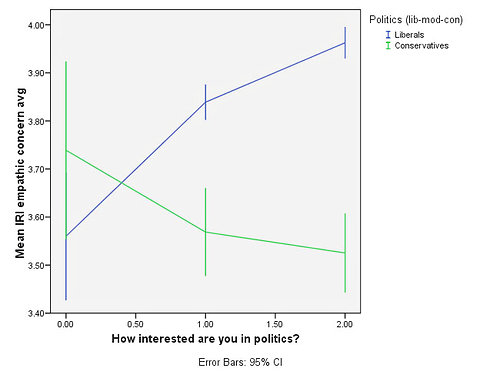 The more interested in politics a conservative is, the lower his (or her) level of empathy. Liberals move in the opposite direction: the more interested in politics they are, the more empathetic. Empathy, in case you’re wondering, is measured by responses to 28 statements in the “Davis Interpersonal Reactivity Index,” including “I often have tender, concerned feelings for people less fortunate than me,” “I sometimes find it difficult to see things from the ‘other guy’s’ point of view,” and “Sometimes I don’t feel very sorry for other people when they are having problems.”

In the 2010 election, 42 percent of voters identified themselves as conservative; 38 percent said they were moderate; and 20 percent said they were liberal. If that division obtains in 2012 and beyond, the proportion of conservative to liberal voters in the electorate should give liberals pause, especially insofar as they expect elected officials to propose and pass legislation the underlying purpose of which is to help those most in need…

I’m a little suspicious of the sudden rush to “prove” that if our political process is irretrievably borked, it’s all down to what’s broken in our individual brains. But there is a certain logic, if you accept the theory that people mostly get interested in politics — in spending precious time and energy on elections that could otherwise go towards work, family life, getting more use out of that expensive gym membership, or keeping up with the local sports franchise — when they perceive that something is “wrong” with the existing order. For conservatives, that “wrongness” is hardly likely to be an overwhelming sense that Tha Gubmint just isn’t doing enough for those people who are… unlike the aggreived conservative.

END_OF_DOCUMENT_TOKEN_TO_BE_REPLACED

Not gonna link, but the Washington Post has Frank Luntz tell us about “five myths of conservative voters.” And then Jonah Goldberg tells us about “Liberals’ top five cliches.”