You are here: Home / Archives for Clown Shoes

Looking at one of today’s amusing events, one of the things about contrarians and people who always play the Devil’s Adovcate is that they spend so long going against the grain that they naturally start to think that any time someone tells them they are wrong or full of it, then that just means THEY ARE ON TO SOMETHING and THE MAN IS TRYING TO KEEP THEM DOWN. So the more you try to tell them “umm, this is bullshit, show some receipts,” the more they think they are right and correct and the ONLY ONE WHO GETS IT. This then pushes them to find those who are more like them and to seek out those voices who reinforce what they are thinking. And pretty soon, before you know it, you go from reasonable posts about the NSA having way too much authority and doing all sorts of objectively wrong shit to “ZOMG I TOTALLY A THINK THESE OBVIOUS FAKES OF HUNTER BIDEN BANGING TEENS ARE REAL AND EVERYONE IS TRYING TO SILENCE ME DAMNED SHEEPLE.”

And such is life.

On another note, it is amusing to me that many people seem familiar with the concept of cokeheads but clearly have never spent any time with them. It would not at all surprise me that three eightballs and 4 gallons of scotch into a three day bender, Hunter Biden was caught on tape with any number of crazy business propositions. I bet he and his friends have had literally hundreds of conversations about ways to make money- in one night. Probably at 5 am with the curtains drawn as the sun comes up as they call someone looking for something to take the edge off when doing more lines doesn’t get them more high but does keep them from crashing and man their jaws are sore from grinding.

If you know, you know. What does this have to do with Joe Biden? Approximately fuck all. Unless you are an idiot.

And people who try to use the drug addiction and trouble of someone’s kid against the parents is the lowest form of fucking low.

END_OF_DOCUMENT_TOKEN_TO_BE_REPLACED

I supposed it was inevitable: 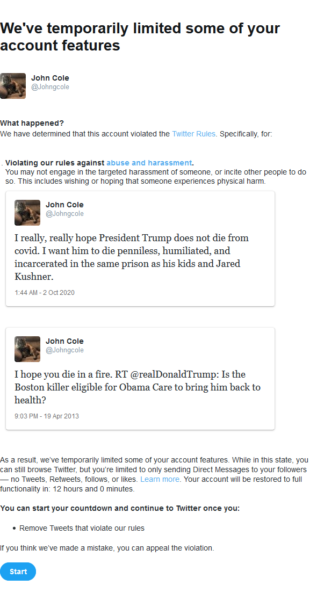 Pretty clearly they did a search for hope+die. Team of rocket scientists at twitter.

END_OF_DOCUMENT_TOKEN_TO_BE_REPLACED

Cleek is a visionary:

i can do it in one word: ~liberal

or, for those of you who don’t grok the boolean: today’s conservatism is the opposite of what liberals want today: updated daily.

or: cowardly authoritarians pretending to be individualists.

or: the cynical leading the stupid.

or: I Got Mine

or: who said we weren’t tolerant? we tolerate racists just fine!

The RNC has released their 2020 platform, and boy howdy is it a doozy:

RESOLUTION REGARDING THE REPUBLICAN PARTY PLATFORM

WHEREAS, The RNC has unanimously voted to forego the Convention Committee on Platform, in appreciation of the fact that it did not want a small contingent of delegates formulating a new platform without the breadth of perspectives within the ever-growing Republican movement;

WHEREAS, All platforms are snapshots of the historical contexts in which they are born, and parties abide by their policy priorities, rather than their political rhetoric;

WHEREAS, The RNC, had the Platform Committee been able to convene in 2020, would have undoubtedly unanimously agreed to reassert the Party’s strong support for President Donald Trump and his Administration;

WHEREAS, The media has outrageously misrepresented the implications of the RNC not adopting a new platform in 2020 and continues to engage in misleading advocacy for the failed policies of the Obama-Biden Administration, rather than providing the public with unbiased reporting of facts; and

WHEREAS, The RNC enthusiastically supports President Trump and continues to reject the policy positions of the Obama-Biden Administration, as well as those espoused by the Democratic National Committee today; therefore, be it

RESOLVED, That the Republican Party has and will continue to enthusiastically support the President’s America-first agenda;

RESOLVED, That the 2020 Republican National Convention calls on the media to engage in accurate and unbiased reporting, especially as it relates to the strong support of the RNC for President Trump and his Administration; and

RESOLVED, That any motion to amend the 2016 Platform or to adopt a new platform, including any motion to suspend the procedures that will allow doing so, will be ruled out of order.

Also, all the speakers are either Trumps or married to Trumps. Interestingly enough, Tiffany is scheduled to speak, so apparently she is back in the will.

END_OF_DOCUMENT_TOKEN_TO_BE_REPLACED

I mean, of course the RNC is being cancelled. Everyone without an (R) behind their name knew it was going to be cancelled. The Democrats decided this MONTHS ago, and thus will be able to hold a good, strong, virtual convention with lots of programming and as much pageantry as is possible in such a setting, and the Republicans will basically have an unscripted zoom meeting and some fucker will Leni Riefenstahl up a zoom meeting for Cheeto Benito.

It’s the same with the coronavirus stimulus. The Democrats passed a bill in the house two fucking months ago, because it was obvious where we would be today (although, it was not entirely obvious that Republicans and Trump would botch this so bad). The Republican caucus in the Senate still does not know what the fuck they are going to do.

It’s literally the same with everything they do. They are reactionaries, and Cleek’s Law is as accurate as the crazification factor. They just want what they want when they want it and then when things go to shit say no one could have predicted and find a way to make things worse or just lie that things aren’t bad.

It’s who they are. It’s what they do.

END_OF_DOCUMENT_TOKEN_TO_BE_REPLACED 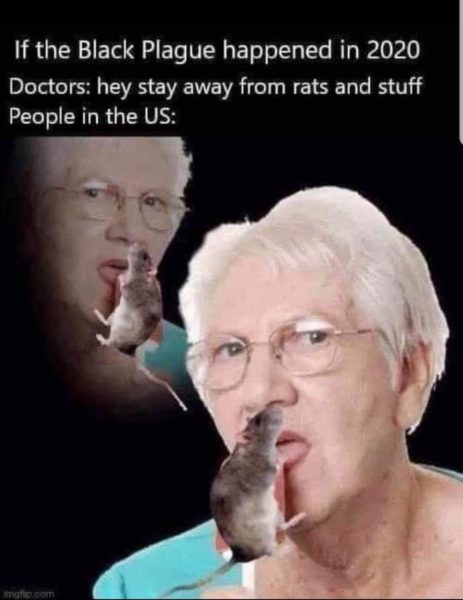 END_OF_DOCUMENT_TOKEN_TO_BE_REPLACED

This is just *chef kiss*:

Of all of the scummy, lowlife hacks at the National Review, the one stepping up to attempt to try to smear the victim and rehab the image of that racist Central Park Karen is a guy named Kyle and I just can not get enough of it.

END_OF_DOCUMENT_TOKEN_TO_BE_REPLACED 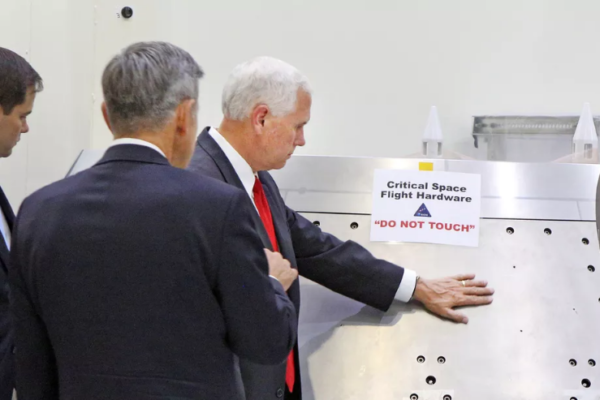 Further evidence that the President and his team are a bunch of fucking idiots:

President Trump was pushing to get out in the public eye in recent weeks and tout his leadership during the pandemic, and White House staff thought they had hit on the ideal event: a presidential visit to thank the Pennsylvania factory workers who had recently taken herculean steps to ramp up U.S. supplies of protective equipment.

Workers had received national attention after dozens of them lived for 28 days inside their factory so they could ensure they were virus-free and their production was not contaminated or disrupted by illness.

White House officials pressed to hold an event at the Braskem factory, initially scheduled for last Friday. But after extensive back and forth, factory officials ultimately asked to postpone, worried that a visit from Trump could jeopardize both the safety of the workers and the plant’s ability to produce special material for masks and other medical gear, according to two people familiar with the decision and documents reviewed by The Post.

First off, the last fucking thing any of these factories need is a bunch of idiots tromping through them in the midst of a pandemic. Any normal, sentient human being would have understood this already.

But what makes this extra special amazing is that President Shit-For-Brains, desperate to Leni Riefenstahl his ass out of this mess, can’t even do that because of his own idiotic bravado of refusing to wear a mask. The last god damned thing any company that has quarantined their staff for months to safely produce sterile equipment will do is allow this dipshit and his team of choads to flounce off Pox Force One, refuse to wear masks and gloves, and then drool all over everything in sight.