You are here: Home / Archives for DC Press Corpse

Trump currently screaming like a maniac at reporters who will all later say that Democrats have an optics problem.

Pelosi basically told Democrats to use the recess to get a feel if their constituents support impeachment, so now's the time to make yourself heard on that. It's actually you who can DO SOMETHING now.

Republicans JUST blocked 2 election security bills — hours after Mueller said Russia is actively trying to sway the 2020 elections — showing in plain sight that they’re willing to dismantle our democracy & take help from our most dangerous adversary to win https://t.co/yfEdJr7v7U

The most important part of the #MuellerHearings.

A hostile foreign power interfered with our elections.

They will do it again. 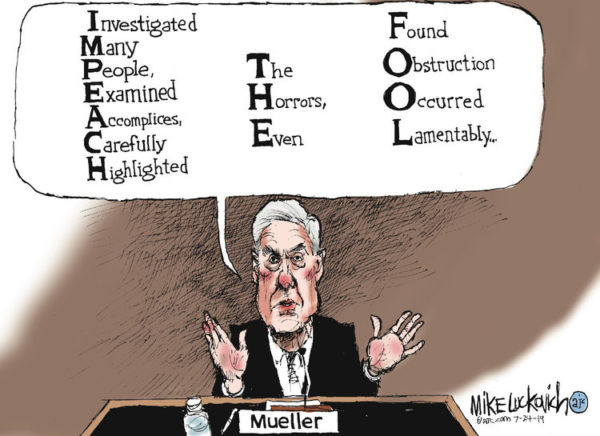 END_OF_DOCUMENT_TOKEN_TO_BE_REPLACED

There may come a day when I do not reshare this picture… but today is not that day!!!! pic.twitter.com/sf35FpomLv

This used to be one of the slowest weeks of the news year, when reporters and political cartoonists could go on vacation with little fear of missing a big story. I’d like to go back to those halcyon days, thank you!

I dunno, if I spent my entire life shilling for a grotesque ideology that led in a straight clear line to a President so repugnant that I had to publicly repudiate him and the party that supports him, I might not be so interested in what DEMOCRATS need to do.

We should just ditch this whole primary thing and just have a small panel of Never Trump Republicans solomonically decide which Democrat would make them most comfortable.

i don't think it's certain trump will lose but it is very strange to see pundits act as if trump won a decisive majority in 2016 rather than squeak by in the electoral college by the thinnest of margins while losing most voters. https://t.co/Re5k7FNRfX

Like, sorry that u wrapped your terrible greedy swamp monster plans in a pretty racism bow & it's all come back to haunt u, but it's not Democrats' job to then regurgitate those same terrible plans in a slightly less racist bow 2 restart the whole dumb-plan-hidden-in-racism cycle

"We're NEVER TRUMP. We HATE TRUMP b/c he tortures children but really can the Democrats be less nice to these same children? Otherwise we will never vote for Democrats Also Elizabeth Warren Kamala Harris women so angry something something. women women. I'm uncomfortable. women."

"You broke it, you bought it," and in the meantime, we're gonna have our own little party over here, is what I am trying to say.

END_OF_DOCUMENT_TOKEN_TO_BE_REPLACED

This is impolite to mention, but one thing about anti-Trump conservative professional political pundits (as opposed to rank and file ex-Republicans) is their job essentially *requires* them to be perpetually saying Democrats are failing to win them over.

A normal person can be a Republican with an unusually high-openness personality, be alienated by Trump, and then go become a regular Democrat.

But if you’re a #NeverTrump pundit it’d be a bad career move to just become a replacement level liberal pundit.

This is true! Spare a single tiny tear for the professional Panglossians, paid by Our Betters to remind all ‘sensible’ readers that well-groomed center-right white men with the correct credentials are obviously the best people to lead us, that’s just science. The Oval Office Occupant has been almost as much a disaster for their quiet careers as he is for the rest of the world… a sloppy, shambling, semi-literate professional faker who continually demonstrates not only his own unfitness, but the general shoddiness of the Panglossians. One tear, maybe a swift kick, and move on without them.

If your only option is to vote for a racist, misogynistic, bigoted, transphobic, xenophobic authoritarian because you can’t abide Democrats’ stances on healthcare and immigration, then you’re not even in the car, David Brooks. pic.twitter.com/WPpnksx93h

When you’re a privileged white dude, not getting first chair (and right of refusal) feels like a demotion…

It’s a national emergency, join our unity government; also we offer you nothing and we’re moving full speed to the left.https://t.co/WaGj67OrwJ

I also feel like sanity and a lack of corruption is not nothing, as a start. Respect for NATO, for the Intelligence agencies, for the rule of law, for the first amendment, for compliance with the emoluments clause. But yeah we are going to disagree on policy and it is a Primary.

Sorry Brian, rather the government murder brown children than people who earn 100X more than me have to pay the same tax rate as teachers.

Ross Douthat in the 1930s would absolutely be arguing that the fascists are a totally reasonable response to liberal democracies giving in to those radical Bolsheviks demanding the end of segregation and for women being allowed to divorce. https://t.co/kRwiUYQLgO

someone who’s not an incompetent, ignorant, narcissistic sociopath would be a significant improvement so the bar’s pretty low https://t.co/70S5P9YFPq

END_OF_DOCUMENT_TOKEN_TO_BE_REPLACED

NEW: Democrats say new DNC debate rules are forcing them to distort their 2020 campaigns to get 130k donors.

A flood of money to Facebook just as Ds complain about the tech giant… https://t.co/bdifDo0Z9F

… or perhaps they are just worried that, without a sufficient number of nearly identical white men on the debate stage, mere Democrats might be enticed to make a wrong choice of candidates? As they did (according to the NYTimes) in 2016?

I mean, I’m not shedding a tear here pic.twitter.com/mQKHfdG1xj

If Seth Moulton has more brains than ambition — and I’m told he’s a very bright man! — he’ll dedicate the months after September 2019 to winning back the support of his current constituents. As will Bill deBlasio, Tim Ryan…

END_OF_DOCUMENT_TOKEN_TO_BE_REPLACED

For the 65,853,514 millionth time (the exact number that voted for @HillaryClinton, 3 million more votes than Trump):

Yes, America has already shown at the ballot box that we are READY for a woman President and VP.

It would greatly simplify the Media Village Idiots’ job if we could all pretend that the Oval Office Occupant actually got more votes than Hillary Clinton. But it would not be true.

Among the many delights of the day when a woman (Harris? Warren? Klobuchar? Gillibrand?) faces a (no doubt fuming) John Roberts on Inaugural Day… will be watching people like Chuck Todd and Jonathan Karl earnestly inquire of each other how ‘The American voter could possibly have made such a counterintuitive choice!’…

I would argue the person who gets the most votes is the most inspiring. https://t.co/KYBubXyFiJ

END_OF_DOCUMENT_TOKEN_TO_BE_REPLACED

I haven’t been posting because I’m in the heartland, taking care of my elderly parents. And, as we all know from the Times, we don’t do anything here except vote for a bigot for President every four years.

Today I was fetching the newspaper (yes, on real paper, old people still read it that way), and the front page story was from a local journalist who apparently writes a weekly column about his experiences. This one explained that he doesn’t join local organizations so he can retain his “objectivity”.

Perhaps we can quibble with this use of the term, but I’d say that he used “objectivity” in a sentence much better than the average DC journalist. “Objectivity” isn’t some kind of balancing act where saying the same amount of the same kinds of words about either side of an issue magically balances a heavenly scale that keeps track of some abstract and useless notion of fairness. Instead, a big part of good journalism (“objective” or otherwise) is not becoming involved with your sources.

The journalist in the local paper understand that it’s a problem if your covering the White House and Cindy McCain praises you as a journalist but above all, a friend. Kelly O’Donnell apparently doesn’t understand something that’s obvious to a heartland goober.

Make friends with your neighbors, keep in touch with old school mates, but don’t buddy up with the people you cover. Why is that so god damned hard?

END_OF_DOCUMENT_TOKEN_TO_BE_REPLACED

Yes, let's wave away accusations of sexual misconduct so we can all bask in the brilliance of a guy who told us John McCain's campaign gaffes were good news for John McCain.https://t.co/GwvPAj8QGV

… except for a handful of his fellow Media Village Idiots, and the Pale Male Oligarchs who enjoy his very special attentions.

But they have money! So — bygones?

The thing about Mark Halperin is that he was the most toxically useless tapeworm in all of DC media, and THEN he got exposed as a horrifying sex creep.

I’m no lawyer but this seems kind of fucking bad. https://t.co/l2N6ga9JwE

If only there were some women who could do his job, like binders full of them.

Where is this generous sentiment for all the women whose professional careers were extinguished by workplace sexual harassment, through no fault of their own and often because they stood up for themselves? https://t.co/09JASimx6N

V important that Halperin get back in the game for 2020 pic.twitter.com/w8szShFusL