You are here: Home / Archives for Decline and Fall

*into a vehicle with a hostage https://t.co/qYvWhv1rc1

In a world with less terrible / outrageous news every day, I have the feeling this incident might’ve gotten more attention.

… Most of those officers — 13 — were from Miami-Dade Police Department, having followed the truck into Broward County during a long chase, said Rod Skirvin, president of the Broward County Police Benevolent Association.

Four people were killed in the shootout Thursday evening at an intersection in Miramar: two robbery suspects who’d hijacked the truck; a UPS driver they had taken hostage; and a bystander, police said.

The shootout happened as a police chase ended after the hijacked UPS truck got stuck in traffic. Gunfire erupted from inside and outside the truck, though it’s not clear who fired first.

Police officers left their vehicles and crouched behind cars — their own and others at the intersection — as shields as they approached, video from the scene showed.

Suspects Lamar Alexander, 41, and Ronnie Jerome Hill, 41, both of Miami-Dade County, were killed, the FBI said.

Also killed were the hijacked UPS driver, Frank Ordonez — who relatives said had been substituting for a colleague who’d called out from work — and bystander Richard Steven Cutshaw, officials said.

Whether Ordonez and Cutshaw were shot by police is under investigation, the FBI has said.

At least 13 police officers were shot at, but none was injured, according to Steadman Stahl, president of the South Florida Police Benevolent Association.

The chase began after Alexander and Hill robbed a jewelry store Thursday afternoon in Coral Gables, near Miami, and hijacked the UPS truck, police said.

Police radioed that gunfire occasionally erupted from the truck even as police chased it, CNN affiliate WSVN reported…

Ooooh, hot pursuit! Stealing jewelry is wrong, and pistol-whipping a store employee is worse, but I can’t see how making sure the perpetrators didn’t escape was worth shooting two people whose only crime was going to work that day.

… “Just about everything that could go wrong did go wrong,” said David Klinger, a criminal justice professor at the University of Missouri in St. Louis. The incident “was really, really bad.”

But as chaotic and calamitous as the episode was, it was also “a perfect example” of why police are allowed to use deadly force against dangerous criminals, Klinger said. Authorities said Lamar Alexander and Ronnie Jerome Hill had left a trail of violence behind them that evening. Stopping them by any means — even with bullets — was “absolutely the right thing to do,” Klinger said.

“In a situation like this, the police are reactive,” Klinger added. “This is not a situation they want to be in. Their hand was forced.”

END_OF_DOCUMENT_TOKEN_TO_BE_REPLACED

I understand the argument when people say Trump isn’t the worst president ever — or even the worst this century. In terms of body count through pointless military actions and the number of lives ruined through financial malfeasance and mismanagement, Trump doesn’t come close to George W. Bush (yet).

But Trump is in a class by himself in his willingness to recklessly gin up rage against entire groups of people and tell outrageous lies that endanger individuals. He eagerly and often does both for political gain, to get himself off the hook or to paint himself as less sleazy by comparison to others. It’s grotesque and repellent, and, as far as I know, it’s unmatched in US history. In this way, Trump has exposed countless people to crackpots and mobs and has caused death and mayhem, though not at scale…so far.

Two of his favorite targets are former FBI lawyer Lisa Page and agent Peter Strzok. Trump defames them not because they engaged in official misconduct (investigations turned up indiscreet behavior but nothing illegal) but rather because they were critical of Trump in text exchanges, which Trump latched onto as evidence of a “deep state” conspiracy. Trump has relentlessly mocked the two and called for their jailing, just like the tinpot authoritarian he aspires to be.

Trump’s behavior toward Page and Strzok is particularly disgusting to me because they aren’t public figures. The way he leers about “lovely Lisa” and lingers over the word “lovers” when talking about Page and Strzok at his hate rallies is grotesque because no one deserves to have their private business publicly mocked by a foul, degenerate hypocrite like Trump. (It’s also jarring to me because I once found it impossible to imagine Trump using the word “lovers” outside the context of a food order in which it immediately follows the word “meat.”)

Anyway, after remaining silent and hoping in vain that Trump would move on, Page has had enough of the shitgibbon’s shit, as she says in an interview with Molly Jong-Fast in The Daily Beast. Here’s an excerpt where Jong-Fast describes why Page decided to speak out:

I asked her why she was willing to talk now. “Honestly, his demeaning fake orgasm was really the straw that broke the camel’s back,” she says. The president called out her name as he acted out an orgasm in front of thousands of people at a Minneapolis rally on Oct. 11, 2019.

Ugh. That’s just so many shades of fucking cringe.

I hope Ms. Page gets some measure of relief from breaking her silence and highlighting the many ways Trump and his nasty sycophants have subverted our federal law enforcement institutions. The whole interview is worth a read.

END_OF_DOCUMENT_TOKEN_TO_BE_REPLACED

Coach of the American sycophancy team arrives at the Olympic Village for the opening games. pic.twitter.com/zMeEg4NwIk

Well, THIS is embarrassing: Nine conservative groups or officials have been accused of inflating sales of Donald Trump Jr.’s new book by purchasing it in bulk. https://t.co/ibT306z3J7

this is doubly hilarious because they’ve got these books that they purchased to butter up to don jr. stacked under a sign that says ‘capitalism not cronyism’ https://t.co/AOPsEXXuPI

The NRCC is supposed to spend money on house races, so if they want to waste it fluffing book sales for Uday instead, totally fine by me. https://t.co/nivH8jkk2x

Chick Fil A betrayed us.

We stood by them for years during every attack and controversy

Despite this they announced they will no longer support Christian organizations

Even worse, it has come out they support the Southern Poverty Law Center!!

No more Chick-Fil-A, ever!

Literally all that happened was Chik Fil A realizing that owning the libs was not a sustainable business model.

END_OF_DOCUMENT_TOKEN_TO_BE_REPLACED

“A thing called space. You know about that right? Space. We’re going to have space covered very well. We’re covering it now but we have to cover it to a much greater extent” pic.twitter.com/FYq1JQ36C7

Cranky grandpa, like others of his ilk, gets hauled away from his comfort zone for the big media-friendly “family” holiday. (Hey, it’s not like anyone in his biological family was gonna miss him.) Kudos to his handlers, who seem to have succeeded in readjusting his meds to the point where he can, however briefly, perform well enough to excite the Media Village Idiots. Such as Politico, back to d/b/a Mr. Pierce’s Tiger Beat on the Potomac:

… It was a journey shrouded in more secrecy than usual even for a presidential trip into a war zone. And it merged the made-for-TV drama Trump savors with a military display he loves: the U.S. commander-in-chief on Thanksgiving, less than a year from the next election, surrounded by cheering troops in Afghanistan.

For a president who at times seems to be at war with his own military leaders, it was a celebration of America’s troops that a small circle of White House aides planned carefully for weeks to prevent leaks that could scuttle the trip…

This time, 12 of the 13 journalists who traveled with Trump — representing news wires, print and broadcast outlets — were picked up on the roof of a public parking garage near Joint Base Andrews just outside Washington and not even told where they were traveling until just before they arrived in Afghanistan. Cell phones, hotspots and any other devices emitting a signal were confiscated from everyone traveling on Air Force One — yes, even the president himself…

The president moved through the sprawling base in a 15-vehicle motorcade that included tan Toyotas with soldiers standing in the truck beds holding combat rifles. Trump was followed into each location by teams of heavily armed combat troops in fatigues, helmets and night-vision goggles.

[Just like a Tom Clancy movie, if Tom Clancy’s hero was a fat old man who can barely strut from his motorcade to his golf cart.]

END_OF_DOCUMENT_TOKEN_TO_BE_REPLACED 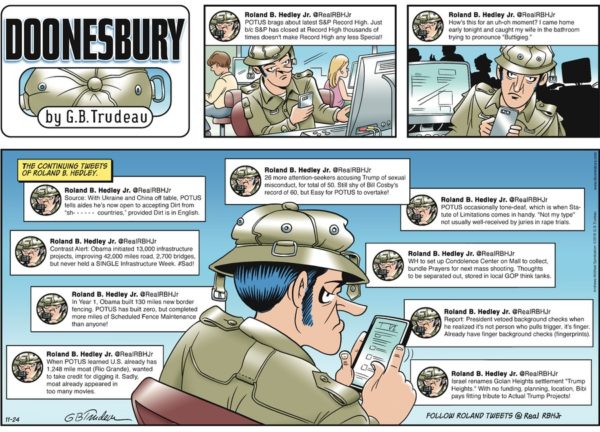 Donald Trump has taken to “working” from his private quarters in the White House rather than the Oval Office because he distrusts the staff around him. https://t.co/TbogjsPREs pic.twitter.com/CyFvdjLSem

This maaay sound familiar to those of us old enough to remember Nixon during the Watergate investigation. Per Politico:

… President Donald Trump is increasingly morphing the White House residence into a second Oval. It’s become the place where Trump feels most productive, where he avoids meddling by his staff and where he speed-dials his network of confidantes, GOP lawmakers and TV pundits.

The residence was where Trump made the infamous July 25 phone call to the Ukrainian president that’s now at the center of impeachment proceedings. It’s where Trump often meets his personal attorneys to plot legal strategy or campaign advisers to shape 2020 campaign moves. And last week it became the location for a Trump meeting that’s as official as any, hosting Federal Reserve chair Jerome Powell — the target of countless Trump twitter attacks — along with Treasury Secretary Steven Mnuchin for a Monday morning discussion of monetary policy.

Maintaining a sanctuary to work and think has taken on greater importance for the president as he increasingly feels under siege by the Democratic impeachment inquiry. Frustrated by the whistleblower complaint and a parade of administration officials testifying on Capitol Hill, Trump is as wary as ever of the staffers around him and distrustful of the traditional White House infrastructure. Working from his private quarters gives him space away from what he perceives as prying eyes and guards against his omnipresent fear of leaks to the media.

It also gives Trump a greater sense of control as he faces the dual challenges of impeachment and his reelection, according to interviews with a half dozen current and former senior administration officials…

END_OF_DOCUMENT_TOKEN_TO_BE_REPLACED

Incredibly cursed and also substantially less unrealistic than you would hope https://t.co/1teA7YAPxI

I mean, Priebus is out there too while we’re at it pic.twitter.com/F0DBlMxwLK

I *think* we can still joke about this, because Spicer doesn’t “look great on TV”, and Priebus hasn’t shown sufficient doglike loyalty to the Oval Office Occupant. As long as Pete Hegseth doesn’t want to give up his Fox News duties…

END_OF_DOCUMENT_TOKEN_TO_BE_REPLACED

It could be worse, you could be a Republican (assuming you could drop 40 IQ points and every moral qualm)…

With Thanksgiving coming up, Doocy and Kilmeade give a masterclass here on uncomfortable inquisitive faces when a relative is saying something widely inappropriate or awkward. https://t.co/webrJpXHg5

I insist that you take 5 minutes and listen to every mini-clip in this thread from this morning. No, don’t read the summaries: LISTEN. 5 minutes. This is the President of the United States. https://t.co/z6jz72TLkj

Dunno why people are assuming he misspoke ;) https://t.co/yEGntYMlIT