Did You Know John McCain Was A POW?

You are here: Home / Archives for Did You Know John McCain Was A POW?

According to a PPP poll released yesterday, Arizona conservaturds have a raging hate-boner for RINO John McCain, and the right god-bothering, anti-immigrant, gun-fondling primary opponent could pick the bitter old anger muffin off:

John McCain’s troubles with conservatives have him in a whole lot of trouble for reelection next year. Even among Republican primary voters just 41% approve of the job he’s doing to 50% who disapprove. Only 37% of primary voters say they generally support him for renomination, compared to 51% who say they would prefer someone ‘more conservative.’

In a lot of ways this is reminiscent of the 2012 Senate race in Indiana. Richard Lugar- like McCain- had enough popularity across party lines that he was going to be pretty safe if he got into a general election. But when conservatives rooted him out of office in the primary and Democrats had a solid candidate lined up, the Democrats picked up a surprising victory. It’s unclear who will challenge McCain in the primary and what Democrat might sign up for the general but at this early stage the conditions appear somewhat Indiana-like.

Here’s hoping the AZ GOP finds its very own Richard “Squeee! Rape Babies!” Mourdock to take down McCain. Not only would that NOT be good news for McCain, it would leave a gaping hole in the lineups of the crappy Sunday poli-hack shows and leave Lindsey al-Graham flying solo as a sad little wingman.

END_OF_DOCUMENT_TOKEN_TO_BE_REPLACED 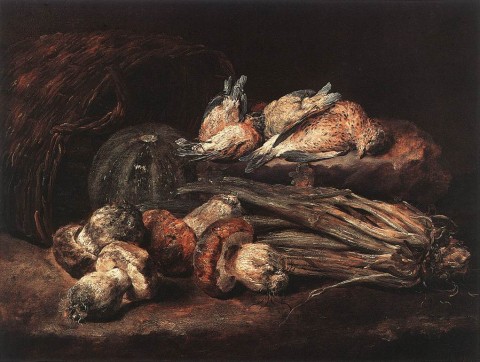 In the meantime, here’s the debate prompt:

Worst deal since Munich or worst deal ever?

Image: Jan Fyt, Mushrooms, first half of the 17th century.

END_OF_DOCUMENT_TOKEN_TO_BE_REPLACED

They are the future MT @bungdan: "McCain is planning hearings with Kissinger, 91, Scowcroft, 89, and Brzezinski, 86." http://t.co/3bOtz63pvl

Sheryl Gay Stolberg, in the NYTimes:

… [S]ix years after losing the presidential election to Barack Obama, Mr. McCain finally has the only job in Washington, other than being president, that he ever wanted: chairman of the Senate Armed Services Committee, overseer of the American military and the nation’s defense policy. The question is whether he will use his new clout (and ability to subpoena) to make war or some accommodation with the White House.

“McCain now has the power either to destroy the president’s national security policy or shape it constructively,” said Leslie H. Gelb, president emeritus of the Council on Foreign Relations. “This is the first step to see whether he is going to use his new power to clobber Obama as he has for the past six years, or whether he will use it to try to shape and improve Obama’s policy.”

For now, despite hints that he is trying to reinvent himself from cantankerous Obama critic to elder statesman, Mr. McCain still seems to be in clobber mode. In an early assertion of his new authority, he said on Tuesday that he would push legislation to block Mr. Obama from sending detainees at the Guantánamo Bay military prison to Yemen.

He said in an interview last Thursday that Mr. Obama’s decision not to send more American troops to Iraq to thwart the Islamic State had put America at risk. “That attack you saw in Paris? You’ll see an attack in the United States,” Mr. McCain said. He repeated his frequent assessment that the president’s foreign policy is “a disaster” and “delusional.” He said “of course” he would have made a better commander in chief….

Denis McDonough, the White House chief of staff, said the president sees Mr. McCain as possessing “a very important viewpoint to consult with,” even if Mr. Obama rejects Mr. McCain’s interventionist stance. Mr. McDonough said Mr. McCain had influenced the Obama administration’s foreign policy, although when he was asked how, he paused.

“The reason I’m pausing,” he finally said, “is I’m trying to give you a concrete example.”…

In Gulliver’s Travels, Jonathan Swift spoke of the Struldbrugs, born immortal but not ageless:

As soon as they have completed the term of eighty years, they are looked on as dead in law… After that period, they are held incapable of any employment of trust or profit; they cannot purchase lands, or take leases; neither are they allowed to be witnesses in any cause, either civil or criminal, not even for the decision of meers (metes) and bounds… Otherwise, as avarice is the necessary consequence of old age, those immortals would in time become proprietors of the whole nation, and engross the civil power, which, for want of abilities to manage, must end in the ruin of the public…

Three hundred years of improvements in medical science don’t seem to have had much effect on the “necessary consequences” of angry, self-centered old men.

END_OF_DOCUMENT_TOKEN_TO_BE_REPLACED

I have no idea whether Petraeus should be indicted, but this is a good indicator:

Dianne Feinstein, the senior Democrat on the Senate intelligence committee, and the Republican senator John McCain told CNN Petraeus should not be indicted. Speaking to the same channel, Holder refused to comment on the case other than to say: “Frequently these things are linked to the media by people not in a position to know.”

I don’t know about you, but whenever DiFi and Walnuts agree on something, I take a damn good look at the other side of the story.

END_OF_DOCUMENT_TOKEN_TO_BE_REPLACED

And don’t say “yeah, except for John McCain”….

The Russian military has moved artillery units manned by Russian personnel inside Ukrainian territory in recent days and is using them to fire at Ukrainian forces, NATO officials said on Friday….

“Russian artillery support — both cross-border and from within Ukraine — is being employed against the Ukrainian armed forces,” [NATO spokeswoman Oana Lungescu] added.

Putin’s playing a very dangerous game, obviously, and we’re seeing the prescience of those who suggested that he hadn’t, or couldn’t, figure out how turn the knobs up and down on the nationalist wave he hopes to use to distract from his crappy governance. 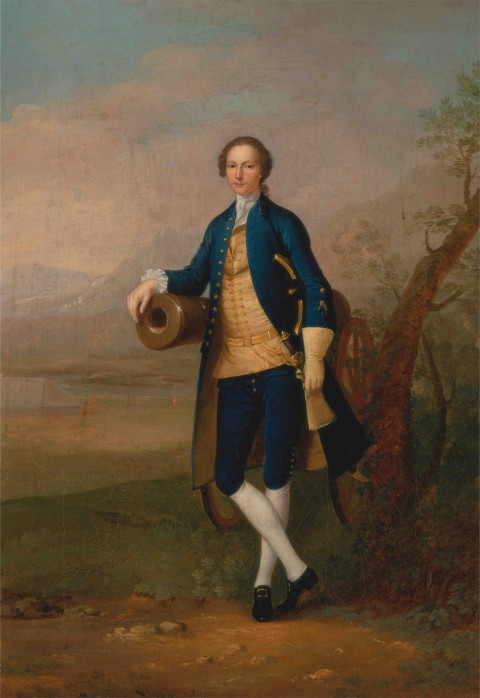 And with that bit of obviousness, I’ll stop, given that my analysis of Russian politics and the regional dynamics is worth not what you paid for it, but quite likely less.

Discuss — and may the more knowledgable among us lead us to wisdom.

END_OF_DOCUMENT_TOKEN_TO_BE_REPLACED

War-boner twins John McCain and Lindsey Graham are slightly tingly about the recent bombing of ISIS forces in Iraq, but they’re begging the president to grant them full engorgement by engaging in further sorties in Iraq and Syria (I’m sure Assad and the Russians won’t mind!) and distributing weapons more liberally throughout the region:

We need to get beyond a policy of half measures. The President needs to devise a comprehensive strategy to degrade ISIS. This should include the provision of military and other assistance to our Kurdish, Iraqi, and Syrian partners who are fighting ISIS. It should include U.S. air strikes against ISIS leaders, forces, and positions both in Iraq and Syria. It should include support to Sunni Iraqis who seek to resist ISIS. And none of this should be contingent on the formation of a new government in Baghdad.

As insane as the first part of that paragraph is, their waving away concerns about the dysfunctional clusterfuck of a government in Baghdad truly reveals the pair’s stupidity and shortsightedness. Why do they suppose the Iraqi military flung its weapons down and ran away from ISIS faster than Rand Paul from an immigrant schoolgirl? Why have Iraqi Sunnis allowed the ISIS dirtbags to roll into their territory relatively unopposed?

Maybe it’s because the Sunnis and Shia don’t trust each other, and the Sunnis despise the Baghdad government. The Iraqis have to sort out their government or this shit will keep happening over and over. Adding more guns to the mix will just give the crazies more guns to pick up next time it all falls apart. That’s why Obama declined to get involved before, despite McCain, Graham & Co. bellowing like ruptured cows from the sideline.

You can make a credible case for US military strikes to prevent an imminent massacre, and Obama did yesterday. (I thought the regional players whom we’ve armed for decades should take the lead on that, but what do I know? Maybe they couldn’t or wouldn’t.) However, the US taking a central military role on an ongoing basis sounds like a perfect recipe for a giant cock-up as well as an obstacle to ever achieving a lasting resolution.

“If ever there were a time to reevaluate our disastrous policy in the Middle East, this is it. Because of the President’s hands-off approach, the threats in the region have grown and now directly threaten the United States. We are already paying a very heavy price for our inaction, and if we do not change course, the costs of our inaction will only grow.”

Well thanks, Alexander the Great and Napoleon Bonaparte! Jesus, I wish Obama would sign an executive order that requires McCain and Graham to punch themselves in the face if they ever utter the phrases “disastrous policy” and “the Middle East” in the same sentence again.

This is the same bullshit those two were spewing back when they were pissing themselves about Saddam’s WMDs and mushroom clouds. Do they think we don’t remember that? Probably. Their media hosts are rarely rude enough to bring that up when they make the Sunday rounds.

Anyway, I hope and trust President Obama will have the good sense to continue to ignore that pair of foreign policy trolls.

END_OF_DOCUMENT_TOKEN_TO_BE_REPLACED

The one tiny consolation, for those of us who were against the C-Plus Augustus’s Excellent Iraqi Adventure from the get-go, is that at least we’re not looking at President McCain right now. I’m with Mr. Charles P. Pierce:

The past continues to shoot at the present in Iraq. Yet another day, and yet another public pronouncement from the president, and yet another spasm of outrage from the foreign-policy claque that got us into the Iraq debacle in the first place. It is going to be a terrible couple of months for anyone who opposed the entire clusterfck from jump and now has to listen to the likes of this tripe from the people who have not yet apologized for the worst foreign-policy decision of my lifetime…

… We are going to hear about making sure that those Americans did not “die in vain.” In fact, as it turns out, they did. They died because the people who sent them to war without the proper equipment and under false pretenses, and the people who encouraged the war itself, like John McCain, who seriously doesn’t know what he’s talking about and hasn’t for years, did not have a plan. They had fantasies. These soldiers died so that Washington neocons could live out their dream of a purgative war of civilizations. These soldiers died because there was oil that people in this country, and around the world, wanted. These soldiers died so that the likes of Richard Cheney could continue to infest the corridors of power, and so that his worthless daughter could continue to have a gig. Hundreds of thousands of Iraqi civilians died for all the same reasons. If we forget all that in our attempt to salvage our Iraqi misadventure, and if we allow the architects of that misadventure to use the current crisis to rehabilitate their crimes and malfeasance, then thousands more people will die in vain…

Apart from nursing the sick certainty that we’ve watched this melodrama before, what’s on the agenda for the day?

With John McCain as Our Co-Pilot: A brief history of the Senator's policy pronouncements on the Iraq War http://t.co/8g0m4m53HG