You are here: Home / Archives for Get Angry

To the fainting couches, gentlemen!…

The brief time when we were *not* accusing those we disagree with of murder was nice while it lasted. https://t.co/qr1rzon1cg

I prefer to assume you aren't TRYING to kill anyone with this bill, you just honestly don't grasp that that'll be the consequence.

The party that elected Donald Trump complaining about caustic language against their wealth care bill is so rich they gave it a tax break.

Clutching-pearls and elbow patches at the ready!

This type of language doesn't increase civility, but furthers divide. It's possible to oppose the bad bill without using such a caustic tone pic.twitter.com/efBqqDSWG7

"They're free-enterprisers. The earth is just another developing planet. Their third world." pic.twitter.com/yDi1eUgfC8

Because TONE is more important than FACTS!

No, it's all about how you do it. Making an argument is fine, labeling people the "death party" is obscene. https://t.co/jyyrNCwvhg

Labeling people the "death party" is "obscene" but choosing to condemn tens of thousands of people to death is… not? https://t.co/pka5KnzPji

Say, wasn't "The Party of Death" the EXACT TITLE of a book by @NRO writer Ramesh Ponnuru? Did you denounce him? https://t.co/cLEo5QxUJK https://t.co/lCZanUGjw0

(The facts, after all, are almost never on the side of the Republicans.)

GOP, 2017: you saying that people will die because of our bill gives us the sads

END_OF_DOCUMENT_TOKEN_TO_BE_REPLACED

Call the Senate. Tell them that the AHCA is horrendous policy that actively and aggressively harms people and that you expect them to vote No.

Be polite but be clear and firm as to what you want your Senator to do.

If you live in a state with two good votes on the AHCA, call them as well. They like to hear that they have support back home. It makes it easier.

The Senate was always going to be where the greatest chance of stopping a policy and moral disaster so let’s get to work.

END_OF_DOCUMENT_TOKEN_TO_BE_REPLACED

1: This is it. This is everything. Next week, Trumpcare will live or die. And it depends on you. Some resources follow in this thread => https://t.co/B3pHCd309i

We know the AHCA is extraordinarily unpopular.  We know that it is unpopular even among Republican voters.  We know that the Senate is far thinner margins than the House and we almost won there.  So the goal this week is to let your Senators know that this is a very bad bill with very real consequences for their constituents.

In latest @QuinnipiacPoll, only 20% approval for #AHCA. Fun game: find atrocious movies that somehow have more than 20% on @RottenTomatoes. pic.twitter.com/BOfySnmYhs 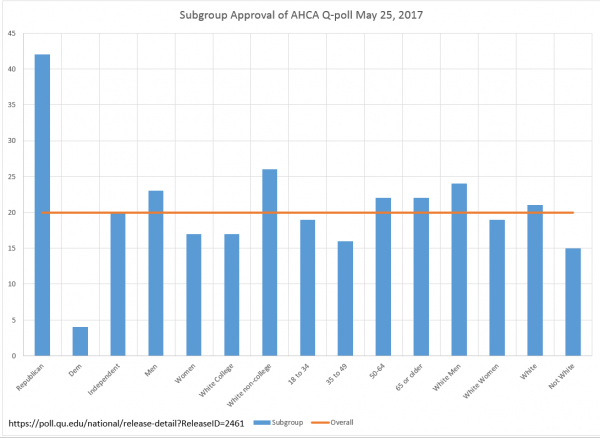 END_OF_DOCUMENT_TOKEN_TO_BE_REPLACED

Investigations take a long time because the facts can be hard to find. But what if the perps make no serious effort to hide the bad facts?

Everyone drawn in to Trump orbit is being destroyed. If he’s gone before he destroys us all, he’ll at least have destroyed many GOP careers

.@SenWhitehouse on reports of Trump sharing intel after criticism of Clinton's emails: The irony is "astounding." https://t.co/ntXIxsm1Vk pic.twitter.com/jOALp06amH

END_OF_DOCUMENT_TOKEN_TO_BE_REPLACED 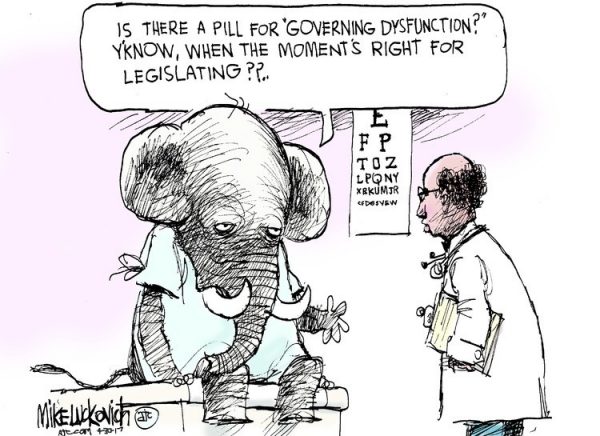 Credit where due: The NYTimes is where most of us who aren’t econ majors first heard about Paul Krugman. “Judas, Tax Cuts and the Great Betrayal”:

The denarius, ancient Rome’s silver coin, was supposedly the daily wage of a manual worker. If so, the tax cuts that the richest 1 percent of Americans will receive if the Affordable Care Act is repealed — tax cuts that are, obviously, the real reason for repeal — would amount to the equivalent of around 500 pieces of silver each year.

What inspired this calculation? The spectacle of Mitch McConnell, the Senate majority leader, and Paul Ryan, the speaker of the House, defending Donald Trump’s firing of James Comey.

Everyone understands that Mr. Comey was fired not because of his misdeeds during the campaign — misdeeds that helped put Trump in the White House — but because his probe of Russian connections with the Trump campaign was accelerating and, presumably, getting too close to home. So this looks very much like the use of presidential power to cover up possible foreign subversion of the U.S. government.

And the two leading Republicans in Congress are apparently O.K. with that cover-up, because the Trump ascendancy is giving them the chance to do what they always wanted, namely, take health insurance away from millions of Americans while slashing taxes on the wealthy.

So you can see why I find myself thinking of Judas.

For generations, Republicans have impugned their opponents’ patriotism. During the Cold War, they claimed that Democrats were soft on Communism; after 9/11, that they were soft on terrorism.

But now we have what may be the real thing: circumstantial evidence that a hostile foreign power may have colluded with a U.S. presidential campaign, and may retain undue influence at the highest levels of our government. And all those self-proclaimed patriots have gone silent, or worse…

END_OF_DOCUMENT_TOKEN_TO_BE_REPLACED

The subpoenas represent the first sign of a significant escalation of activity in the FBI’s broader investigation begun last July into possible ties between Trump campaign associates and Russia.
The subpoenas issued in recent weeks by the US Attorney’s Office in Alexandria, Virginia, were received by associates who worked with Flynn on contracts after he was forced out as director of the Defense Intelligence Agency in 2014, according to the people familiar with the investigation.
Robert Kelner, an attorney for Flynn, declined to comment. The US Attorney’s Office in Alexandria, the Justice Department and the FBI also declined to comment.

CNN reports that this was not just leaked tonight – they’ve been working on the story for several days. And their reporting is a sign that it will not be easy for the Administration to simply make this all go away now that they’ve fired James Comey. Though the President’s surrogates are making those suggestions as they make the rounds on cable news this evening.
Andrea Chalupa reported earlier this evening, on her twitter feed, that:

Members of Congress, in both chambers and on both sides of the aisle, are now calling for a special prosecutor and/or an independent investigation. Pressure will continue to build. And we do not have to passively wait and see what happens. We can help to increase the pressure. Call your members of Congress, both representatives and senators. Tell them you expect them to support the appointment of a special prosecutor and the creation of an independent investigation. Tell your senators that you expect them to take no action on the nomination for a new FBI Director until the Administration provides answers. Tell both your representatives and your senators that you expect no business that is not absolutely necessary to keep the government functioning, such as raising the debt ceiling, to be conducted until a special prosecutor is appointed, an independent investigation is established, and the Administration is forthcoming with answers. Tell them this is not a partisan issue. It is an issue of patriotism. Of country before party. And that you will vote against any senator or representative that puts party before country. America exists because of the participation of its citizenry in a self governing republic. Now we all must take the steps necessary to conserve and preserve our inheritance as Americans for those Americans yet to come. The fate of the Republic is in all of our hands. It is worth fighting for even if it isn’t perfect. And fighting for it is far better than giving in to despair.

END_OF_DOCUMENT_TOKEN_TO_BE_REPLACED

Here’s a tweet from The Hill a couple of days ago and my response: 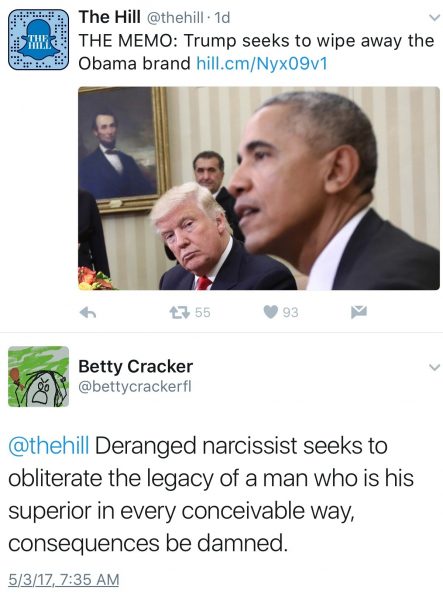 Here’s a link to the article. I think it’s spot on regarding Trump’s goal here, and I’m glad the writer used the word “brand,” even though it’s usually annoying to see life-or-death matters discussed in the language of an ad campaign.

It’s appropriate because Trump thinks in those terms. Fellow citizens, our country has empowered a malignant narcissist with a massive inferiority complex. And he is bent on unmaking President Obama’s legacy because it drives him insane(r) that Obama is more loved, accomplished and respected than Trump will ever be.

Does Trump have a fucking clue what’s in the AHCA? Nope. He might actually believe the lies he’s telling about the bill covering more people and costing less. More importantly, that’s not what matters to him. Probably the only thing that confers wood to the flaccid little appendage Trump’s wife dreads is the prospect of undoing something Obama achieved.

What’s worse, the Republicans have figured this out, so they’ll continue to manipulate Velveeta Voldemort to their nefarious ends with “wins,” like ripping away healthcare for millions, unleashing predatory bankers, getting rid of consumer protections, disenfranchising voters and persecuting women, gay people, black and brown people, Muslims, immigrants, etc.

They’ll stop at nothing, the GOP — both in Congress and their hate-filled base — including collusion with a hostile foreign power. So we have to stop them. We simply have no other choice. Suit up, Juicers. We’re in for the fight of our lives, and I don’t know about you, but if I’m going down, I’m going down swinging.