You are here: Home / Archives for Get Angry

Every single fucking word, especially this:

END_OF_DOCUMENT_TOKEN_TO_BE_REPLACED

All of the different surveys on insurance status measure slightly different things. But they all point in the same general trend. Uninsurance is consistently dropping, the private ESI based system has not changed much in either direction and most of the uptake is in government sponsored programs.

Keep this in mind as we watch Republicans try to take us back to 2008.

END_OF_DOCUMENT_TOKEN_TO_BE_REPLACED

Jim Newell has an omnibus piece on how the Democratic Party is going to be adapting its messaging and the DNC to respond to the groundswell of demonstrations and activism that have been sweeping the country:

It is much easier to harness energy than it is to be tasked with mustering energy where there is none. The DNC isn’t going to come up with “the message” any more than House Democrats are, or any more than Chuck Schumer is. The message is going to be determined on the ground and filter up to its politicians, and some of the best messaging in years is coming out from these packed town halls. The video of Jessi Bohon’s Christian defense of universal health coverage at a Tennessee town hall for Republican Rep. Diane Black has exploded. The clip of a Republican official in Florida being instantly jeered to silence after saying “death panel” was the most effective rejection of that lie since Sarah Palin first invented it eight years ago. Official Democrats don’t need to come up the message. They just need to get out of the message’s way.

I finally got a chance to listen to three of the candidates for DNC Chair on Josh Marshall’s podcast. As Newell points out in his piece, the characterization of this as a horserace between the “Bernie faction” (Keith Ellison) and the “Establishment faction” (Tom Perez) is silly. Both have a similar plan for Democrats: running races up and down the ballot, channeling the energy of recent protests, and re-building state and local party organizations. Either would be a good DNC leader. My only concern about Ellison was that DNC chair in 2017 is a full-time job. Since he’s committed to resigning his seat if he’s elected, that’s a non-issue.

END_OF_DOCUMENT_TOKEN_TO_BE_REPLACED

This may become the first case in the emoluments clause. Keep an eye on this. https://t.co/qux3PN63hO

A lobbying firm working for Saudi Arabia paid for a room at Donald Trump’s Washington hotel after Inauguration Day, marking the first publicly known payment on behalf of a foreign government to a Trump property since he became president.

Qorvis MSLGroup, a communications firm that lobbies for the Saudis, has been organizing veterans and other activists to come to Washington to urge Congress to repeal the law letting 9/11 victims’ families sue the kingdom. Between 20 and 40 veterans, with the assistance of the advocacy group NMLB, stayed at the Trump International Hotel on Pennsylvania Avenue in December and January.

One of those veterans checked in on Jan. 23 and left on Jan. 26 at a rate of $250 to $325 a night plus tax, according to NMLB president Jason Johns. The bill was paid by Michael Gibson, a subcontractor to Qorvis representing the Saudis, according to disclosures filed with the Justice Department.

The Emoluments Clause of the Constitution prohibits U.S. officials from receiving payments from foreign governments. Lawyers started warning about the potential for violations at Trump’s Washington hotel and overseas properties after he won the election, but the clause didn’t start applying to Trump until he took office on Jan. 20…

“The problem with Donald Trump’s constitutionally forbidden foreign government cash and other benefits is not just that any one particular payment is problematic — it’s also a systemic problem,” said Norm Eisen, who was President Barack Obama’s ethics czar and is now part of a lawsuit accusing Trump of violation the Emoluments Clause. “It’s another tile in the mosaic of unconstitutional behavior.”…

Before the inauguration, Kuwait and Bahrain held events at the Trump hotel, and other foreign diplomats reportedly patronized it to curry favor with the incoming president.

Trump leases the building for the hotel from the General Services Administration, part of the executive branch. Democrats are pressuring the agency to evict Trump because a line in the contract prohibits it from benefiting an elected official. Trump’s lawyer and some contracting experts dispute that interpretation.

Shortly after his inauguration, Trump replaced the agency’s designated temporary chief with his own pick.

END_OF_DOCUMENT_TOKEN_TO_BE_REPLACED

By a 49-to-43 vote, Senate rules that Elizabeth Warren broke rule impugning a senator. She now cannot speak during debate on Jeff Sessions.

I spoke out about @SenatorSessions – until @SenateMajLdr McConnell decided to silence me. https://t.co/qbty7x0iLl

It’s not as though Mitch McConnell would be going down in the record books for any positive actions, after all. Given the history of Southern racists’ fragile ‘honor’, I suppose we should be grateful these ‘gentlemen’ are no longer allowed to carry weapons in the chamber. Per the Washington Post:

In an extraordinarily rare move, Majority Leader Mitch McConnell (R-Ky.) interrupted Warren’s speech, in a near-empty chamber as debate on Sessions’s nomination heads toward a Wednesday evening vote, and said that she had breached Senate rules by reading past statements against Sessions from figures such as the late senator Edward M. Kennedy (D-Mass.) and the late Coretta Scott King….

“Sen. Warren was giving a lengthy speech. She had appeared to violate the rule. She was warned. She was given an explanation,” he said. “Nevertheless, she persisted.”

Other Democrats later came to her defense and tried to have King’s letter placed into the Senate record. But Republican senators quickly objected. They did so again when Sen. Kamala Harris (D-Calif.), the chamber’s only African American woman, asked that Warren be allowed to resume participation in the debate…

Here is the section of the 1986 Coretta Scott King letter that McConnell is now silencing @SenWarren for reading https://t.co/4Wc2toARFO pic.twitter.com/K5jzNiszYY

It’s unacceptable & inappropriate that @SenWarren was stopped from reading a letter by Coretta Scott King on the Senate floor #LetLizSpeak pic.twitter.com/etP0ZCQlAy

"Nevertheless, she persisted" is likely showing up on a lot of protest signs this weekend. https://t.co/dbA1UaqwUU

READ THIS. Tonight the GOP silenced @SenWarren AND Coretta Scott King. Below is the letter… https://t.co/3mExB55u5N pic.twitter.com/lMHqP0asY0

(Olivia Pope would’ve told McConnell he was making a serious mistake, one suspects.)

END_OF_DOCUMENT_TOKEN_TO_BE_REPLACED

Quinnipiac finds immigration ban much more polarized and less popular (except among Republicans) than before Trump's order pic.twitter.com/6p7JwgDaDb

The Repub response, fronted by the “leader of the smart Congressional conservatives”:

50% less immigration in next 10 years proposed in legislation to be introduced in the Senate https://t.co/A2qsZuyc5M

Sen. Tom Cotton and Georgia Sen. David Perdue have started taking steps to crack down on legal immigration, a focus shared by the Trump administration, per Politico. They’ll formally propose legislation on the matter as soon as today. The details:

– Eliminates multiple avenues for U.S. citizens and permanent residents to sponsor family members for green cards.
– Gets rid of the diversity visa lottery, which allots 50k visas per year for citizens of countries with low levels of immigration to the U.S.
– Restricts the number of refugees allowed into the country to 50k annually, similar to rates outlined in Trump’s travel ban.
– If approved, the number of legal immigrants allowed into the U.S. under the bill would plummet by 40% in the first year and by 50% over the next 10 years, according to Cotton’s aides.

Of course, count on Rep. Steve ‘Pig Muck’ King to lunge for the moral sub-sub-basement, just to stay in contention for Worst Congresscritter…

Some people have lost their minds: @SteveKingIA: Putin Allows Freedom of Dissent Because He Hasn’t Murdered @Kasparov63 in NY Yet. pic.twitter.com/Whq5FefiHR

Don’t think you can call this behavior “normal”, but it’s become the Republican standard.

END_OF_DOCUMENT_TOKEN_TO_BE_REPLACED

I’ve been playing a bit more with the 2016 and 2017 QHP data in an attempt to figure out the incremental cost of the Trump Executive order.  I think 4.25% is a good lower estimate.

My data is still here:

I again excluded Kentucky and Louisiana.  Kentucky was switching from Kynect to Healthcare.gov while Louisiana had a mid-year Medicaid expansion.  I wanted to isolate the effect of the executive order from whatever the general trend in enrollment was.  I used the CMS enrollment snapshot for 2016 and 2017 that contained January 14th.  2016 was goes through January 16 while 2017 only goes through January 14th.  The 2016 report contains two extra days worth of data and more importantly, 2016 contains a deadline day as people who buy coverage by the 15th would see their policy start on February 1st.  We know deadlines spur enrollment.

More than 8.8 million Americans were signed up for 2017 coverage through HealthCare.gov as of January 14, 2017. This compares to about 8.7 million sign-ups as of January 14 last year, as Americans continue to demonstrate strong demand for 2017 Marketplace coverage.

So the question is what was the deviation from 1/15 to 1/31? If the Executive Order and the dropping of advertising and potentially elite knowledge networks disseminating anti-enrollment messaging or more likely fear, uncertainty and doubt about PPACA being a good play?

2017 using my known flawed data was running .96% behind 2016 on the January 14th inclusive update.  2017 ended up running 5.25% behind 2016 on Healthcare.gov states.  The increment (using favorable to the null hypothesis data) slowdown in pace that can be attributed to Trump Administration actions is 5.25-.96 or 4.29% of enrollment was lost due to the executive order and other Trump administration actions such as shutting down some outreach and advertising in the last eleven days of enrollment.

4.29% is a minimal level of enrollment loss.  Using the January 14th pace, 2017 was running 1.1% ahead of 2016.  Charles Gaba is collecting data from the state based exchanges.  The state based exchanges ran their own marketing campaigns that did not get shut off on 1/20/17.  He is showing at least a 1.5% enrollment increase.  So more aggressive baselines can credibly argue that the Trump Administration actively discouraged 6% of the market from signing up.

Finally, here are some charts that I had fun creating as I worked through this problem. 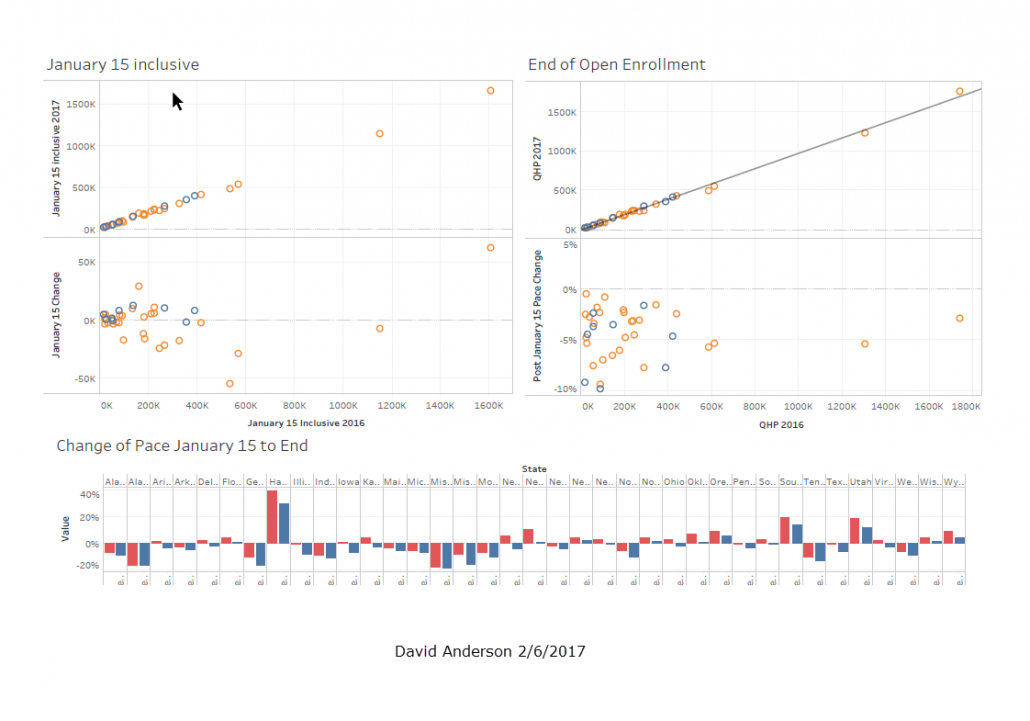