Just Shut the Fuck Up

You are here: Home / Archives for Just Shut the Fuck Up

Has a sitting governor ever taken it upon herself to absolve her constituents of murder most foul? Maybe, but I don’t recall it.

“Justice was served. The people of Oklahoma do not have blood on their hands.”

If you say so, Lady MacBeth. Fucking sociopath. I wish I thought the horror and absurdity of this would make a damn bit of difference.

END_OF_DOCUMENT_TOKEN_TO_BE_REPLACED

Modern conservatism in the US is predicated on a bizarre, ongoing inversion of reality. Item: an addled B-movie actor explodes the national debt and is lionized as a champion of small government. A cowardly, none-too-bright male cheerleader from a patrician clan is packaged and sold as a brush-clearin,’ neo-Churchillian, genius cowpoke.

The party that bankrupted the country through ruinous, pointless warmongering and Wall Street wilding markets itself as the fiscally responsible foreign policy grownups. The party that lets a gun manufacturer flak organization intimidate it into allowing terrorists and the floridly insane to purchase unlimited semiautomatic weapons bills itself as tough on crime. Etc.

So it shouldn’t be surprising that conservatives’ perception of their ongoing defeat in the culture wars is exactly the opposite of reality on every level too. But that doesn’t mean we can’t laugh at the ahistorical ranting. Cue the Powertools, lamenting the resignation of erstwhile Mozilla CEO Brendan Eich:

So the liberals claim another scalp. This is something new in our history, as far as I know. Until now, private citizens could hold whatever political beliefs they wanted, and support political causes as they chose.

Ever heard of the McCarthy hearings? Where a wingnut senator persecuted private citizens and destroyed their livelihoods because of their political beliefs? See, when the party of free markets decides to regulate political beliefs, it does so via the government.

Over at Heritage.org, they’ve discovered the power of government policy in leading social change:

Okay, so you guys were for prohibiting the government from discriminating against same sex couples in tax policy, employment, licensing, accreditation or contracting, right? Nope.

Once again, the self-proclaimed anti-nanny state crusaders and champions of free markets are revealed as sniveling hypocrites. Hoocoodanode?

END_OF_DOCUMENT_TOKEN_TO_BE_REPLACED

Perhaps this is a silly personal pet peeve, and lord knows it’s the least of Politico’s sins. But if I see this headline, I want to read an account of Sarah Palin flooring Peggy Noonan with an uppercut to the jaw. (It would also be cool if Noonan rose up from the mat, kneed Palin in the cooch and executed a pile-driver.)

That’s what “hit” means, not opening up a rarely closed piehole and letting more stupid dribble out. I also hate the term “baby bump,” but in defense of those who use it, there aren’t that many short, snappy substitutes. The same cannot be said of “hit” used in the context above: insults, taunts, heckles, jeers, etc. — all better choices, Mr. Byers.

If you were Language Emperor, what common expressions or usages would you banish from the English language?

END_OF_DOCUMENT_TOKEN_TO_BE_REPLACED

So Robert Gates has a book to sell, and the WaPo‘s favorite Beltway lifer tells us in an advance review that it further confirms Woodward’s fears that the skinny dude in the Oval Office might just be in over his head:

In a new memoir, former defense secretary Robert Gates unleashes harsh judgments about President Obama’s leadership and his commitment to the Afghanistan war, writing that by early 2010 he had concluded the president “doesn’t believe in his own strategy, and doesn’t consider the war to be his. For him, it’s all about getting out.”

Leveling one of the more serious charges that a defense secretary could make against a commander in chief sending forces into combat, Gates asserts that Obama had more than doubts about the course he had charted in Afghanistan. The president was “skeptical if not outright convinced it would fail,” Gates writes in “Duty: Memoirs of a Secretary at War.”…

As a candidate, Obama had made plain his opposition to the 2003 Iraq invasion while embracing the Afghanistan war as a necessary response to the 2001 terrorist attacks on the United States, requiring even more military resources to succeed. In Gates’s highly emotional account, Obama remains uncomfortable with the inherited wars and distrustful of the military that is providing him options. Their different worldviews produced a rift that, at least for Gates, became personally wounding and impossible to repair….

Gates writes about Obama with an ambivalence that he does not resolve, praising him as “a man of personal integrity” even as he faults his leadership. Though the book simmers with disappointment in Obama, it reflects outright contempt for Vice President Joe Biden and many of Obama’s top aides…

Gates is 70, nearly 20 years older than Obama. He has worked for every president going back to Richard Nixon, with the exception of Bill Clinton. Throughout his government career, he was known for his bipartisan detachment, the consummate team player. “Duty” is likely to provide ammunition for those who believe it is risky for a president to fill such a key Cabinet post with a holdover from the opposition party.

He writes, “I have tried to be fair in describing actions and motivations of others.” He seems well aware that Obama and his aides will not see it that way…

“All too early in the [Obama] administration,” he writes, “suspicion and distrust of senior military officers by senior White House officials — including the president and vice president — became a big problem for me as I tried to manage the relationship between the commander in chief and his military leaders.” …

Gonna be interesting to see how other readers regard Gates’ memoir, but this review does nothing to challenge the long-standing suspicion Bob Woodward has been working for the Permanent Security State since his Navy days.

END_OF_DOCUMENT_TOKEN_TO_BE_REPLACED 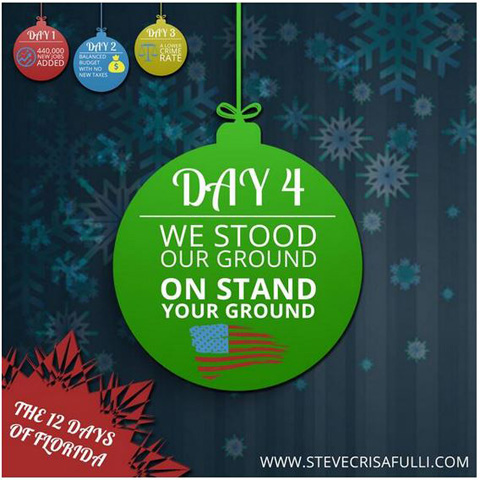 The above graphic is an actual thing someone created for Rep. Steve Crisafulli, who will be Speaker of the House in the Florida legislature next year. The future speaker commemorated the upcoming birthday of Baby Jeebus by bragging on Twitter that the state’s wingnut-supermajority legislature retained the law infamous for allowing a deranged serial domestic abuser to stroll out of a Florida courtroom a free man after shooting an unarmed teenager dead.

The “stand your ground” issue here in Florida is inextricably connected with the Trayvon Martin case; it’s just not possible to bring one up without implicitly broaching the subject of the other, at least not now, and certainly not in the context of the recent legislative review Crisafulli references. While I think SYG is a terrible law and the outcome of that trial was a grave injustice, I get that there are other ways of looking at it, in a “gosh, it’s a shame that happened, but we still need the law” sense.

But to slap that slogan on a Christmas ornament image and push it out there as a celebratory message for the people of this state? Including the Martin family? That’s just plain sociopathic.

END_OF_DOCUMENT_TOKEN_TO_BE_REPLACED

I get it. The website for 40 million previously uninsured people who are now, because of the ACA, going to get healthcare coverage, sucked.

I just watched the SNL opening skit mocking Sebelius and ACA, and the only thing I could think was thank fucking ALLAH that Social Security and Medicaid were rolled out in the pre-internet days.

Think about it, you fucking jackasses at the Wonkblog and you other alleged liberals. All the programs you claim to love, like SS, Medicare, Medicaid, etc. At this point in the rollout for these programs 50, 60, and 70 years ago, the mail would just be reaching the respective offices. Problems people are experiencing today would not even be noticed for four months in those days, yet people still participated, just as people are right now.

Ask someone who has actually struggled to get healthcare and now can, and wasn’t really put off by a couple hour wait to finally get coverage:

Obamacare is more than a website. More than half of the people I worked with on the Obama campaign in 2008 said health care reform was their reason for joining the campaign and working to elect a Democrat. Forty-seven million Americans, including me, were uninsured until now. When I finally was able to log into the site–after a few days and a few false starts–I was floored by the number of affordable options. When I scrolled through my list of choices–124 different plans to be exact–I realized that this is the reason Republicans hate the program so much: it will fundamentally change lives, including my own.

There are a few glaring omissions in the coverage of Obamacare’s shaky rollout. For the most part, those covering the problems are insured themselves and consequently greatly underestimate the patience of a chronically uninsured person who has been counting down the days until Obamacare began so they could have a little peace of mind that if they got sick they wouldn’t be staring down bankruptcy.

The website problems are being fixed–the New York exchange that I am using to compare plans is working just fine as of this morning–and the Obama administration has promised to work on the glitches to ensure that Americans who will likely wait until the last minute to sign up will have a working website. Enrollment lasts until February 15th and the coverage begins January 1st. While the early website issues are frustrating, they by no means indicate that the program as a whole has failed.

And unless you are a journalist who has been chronically uninsured, your feigned frustration about website issues reeks of privilege. To me, a few website glitches are a lot less frustrating than having to use the same inhaler for over a year because I can’t afford to go the doctor. Perspective is everything.

That’s Zerlina Maxwell, one of the nicest people I have ever met, who has spent the last week being insulted by people for refusing to fall over into the vapors over the new website and actually explaining how important this new legislation was for her.