You are here: Home / Archives for Manic Progressive

I’m sitting here, eyes watering from smoke inside my home due to the air quality outside. Don’t worry, I’m not too close. Just about 65 miles away. We’ve been an ash covered mess since Tuesday, because much to my surprise, turns out there’s a hecka lot of fires going on Cali. Brilliant, 2020.
But 1 year ago today, there was a momentous occasion. For me, at least.

This was the culmination of something I started a while back and frankly, I wouldn’t have been able to do without you guys here at Balloon Juice, so thank you. It sucked a bit, being there by myself while surrounded by so many happy families, but I like to think I wasn’t actually alone, I had the Juicitariat with me. A year later. How do I feel…? Truth is, I’m as ambivalent as when I started. At least about staying in a country that has done it’s best to demonstrate it does not want me. It only eased things for me by a modicum and the poor choices my fellow citizens made in 2016 is making me incredibly anxious as my most recent contract closes out this month with a pandemic and record setting numbers of unemployed competing with me for whatever jobs are out there. Thanks a lot, asshats of America. But my ethics and plain old comprehension of what an incredibly dangerous situation it would be for America to be the fascist powerhouse the current administration would make it still tells me my choice was the right one – if not for me, then for the good of humanity. I know, some are going to mock such a statement. My one little vote, little voice affecting humanity. Too many messages of individual powerlessness have been fed to Americans. We are very powerful as individuals and as a united team. I believe in that intensely. I believed in that enough to bypass escaping a place I felt held no love and no security for me to make sure that I did some level of work to set this Trumpian mess right. The right thing is always worth doing over the comfortable thing. … Damn, I wish I was less ethical. 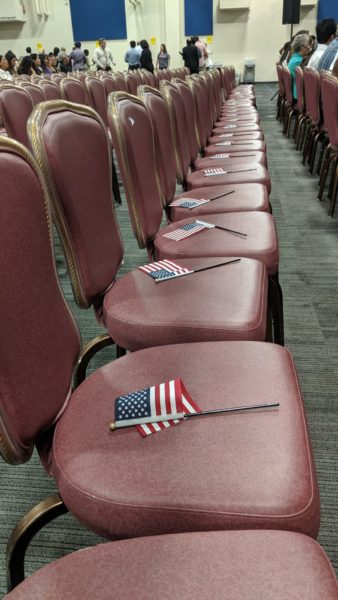 There was a lot of excitement I really didn’t feel that day. And I couldn’t stand a single moment of the pomp, plus, I think Trump spoke, I don’t know, I probably blocked it. For me, it was the start of truly understanding the sort of ambivalence Frederick Douglass probably felt when he wrote, “What to the Slave is the Fourth of July?“. The one friend who managed to meet up after to celebrate probably found me taciturn and surly. Just a lot of feels that day. But one thing gave me great joy and continues to. 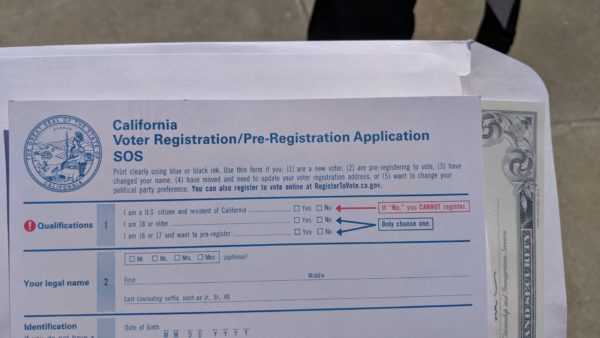 I registered 15 minutes after I was sworn in. I got my first “I voted” sticker this spring and this fall – I will vote for Joe Biden, Kamala Harris and every Dem on the ballot. I have to read up on the propositions – thanks Ballotpedia & League of Women Voters! – but I get to have my say in who runs this overgrown asylum this fall of 2020. I have to design some postcards and get geared up with Postcards to Voters, not to mention sign up to text GOTV, so things are going to get busier as we close onto the election. The fact that I can do this, that pulls me into the happy column. This was the most important thing and I am proud to be here and do this. This country deserves better than Donald Trump and his administration. I may just be one person, one little voice, but I am determined to use all my power as one person and do the work of pulling this nation back on course to be what it’s ideals claim it wants to be. And if we do it, then do it a few more election cycles, well, New Zealand will still be there for a visit.

The kidlets did not care about my personal triumph, of course. Ah well. Open thread to celebrate your achievements or whatever, I’m not the boss of you.

END_OF_DOCUMENT_TOKEN_TO_BE_REPLACED

I got no words:

Sen. Kyrsten Sinema is facing a censure vote from the Arizona Democratic Party, brought by progressives who deem her politics too accommodating to President Donald Trump at the expense of Democratic values.

Sinema, D-Ariz., built a moderate political brand during her three terms in the House of Representatives, which has extended to her early days in the Senate. According to the FiveThirtyEight Trump Tracker, she has opposed Trump while in the Senate 81% of the time. In the House, she supported Trump’s agenda 54% of the time.

While Sinema’s political centrism has earned her Republican support, it has grated on progressives — some of whom silently protested her during a state fundraising dinner in downtown Phoenix. Democratic state committeemen will consider the resolution on Saturday, at the Arizona Democratic Party’s quarterly meeting.

She barely won, and that was not because there were more progressive votes to be had left on the table. I mean, Arizona, ffs. She replaced Jeff Flake. If you know a self styled progressive in Arizona, tell them to fucking pull their shit together.

END_OF_DOCUMENT_TOKEN_TO_BE_REPLACED 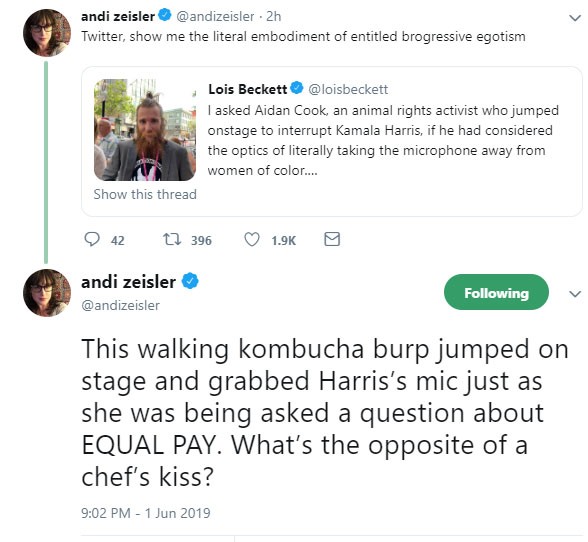 END_OF_DOCUMENT_TOKEN_TO_BE_REPLACED

This ain’t back in the day: 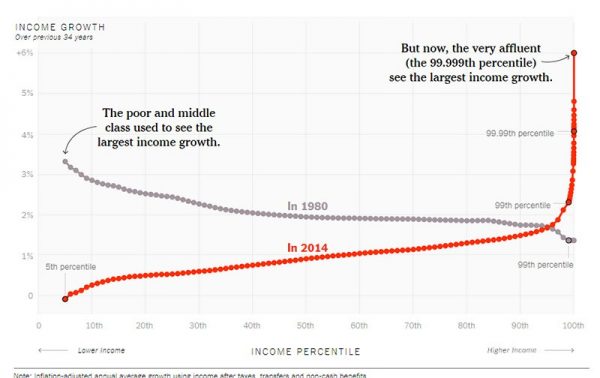 Many Americans can’t remember anything other than an economy with skyrocketing inequality, in which living standards for most Americans are stagnating and the rich are pulling away. It feels inevitable.

A well-known team of inequality researchers — Thomas Piketty, Emmanuel Saez and Gabriel Zucman — has been getting some attention recently for a chart it produced. It shows the change in income between 1980 and 2014 for every point on the distribution, and it neatly summarizes the recent soaring of inequality.

It’s been 40 years since the right wing long game to destroy the middle class and the poor began, and they are winning. Unprecedented propaganda efforts have coal miners slapping “Friends of Coal” bumper stickers on their cars, broken workers are chanting “right to work” as they struggle to crush the unions that would and once did protect them, and the courts have been stocked with corporate friendly judges. In my state, literally. There are things we can do about it (if we band together and chip away at the GOP stranglehold in Washington):

The problem is that wealth and capital income are not distributed evenly. In 2014, the average wealth of the bottom half was $349. For the top one percent, it was over $16 million.

It is worth emphasizing just how much income at the top of society comes from passive ownership of investments rather than from working. The top 0.01 percent of individuals in society have an average income of $28 million. Three-fourths of that income, or $21 million, came from capital in 2014.

If we want to get serious about creating a fair and egalitarian society, we must confront capital directly. Wage levels are important. Benefit levels are important. But getting those things right will not be enough so long as nearly one-third of the national income flows out passively to a handful of people at the top of society.

Current liberal efforts to tackle wealth inequality are woefully inadequate. Policies aimed at building the assets of low-income families, the typical approach to this issue, rarely succeed on their own terms and, even if they did succeed, would only be an insignificant drop in the bucket. For wealth and capital income to become more fairly distributed throughout society, the ownership of existing assets must be reordered towards that end.

But, as we know, the perfect was the enemy of the good in the last election, and we have this:

Different policies could produce a different outcome. My list would start with a tax code that does less to favor the affluent, a better-functioning education system, more bargaining power for workers and less tolerance for corporate consolidation.

Remarkably, President Trump and the Republican leaders in Congress are trying to go in the other direction. They spent months trying to take away health insurance from millions of middle-class and poor families. Their initial tax-reform plans would reduce taxes for the rich much more than for everyone else. And they want to cut spending on schools, even though education is the single best way to improve middle-class living standards over the long term.

I don’t know what it is going to take to unite “the left”- whatever that means anymore. Hell, I don’t even know what to call myself anymore because I support single payer, higher tax rates, higher capital gains, decriminalization, demilitarization, reinstatement of the draft, am pro-choice, etc., ad nauseum, but because I voted for Hillary I’m apparently a neoliberal. At any rate, I thought the election of Trump would unify “the left,” but it has apparently made us more fractious than ever. But we need to get our shit together, because things done changed.

END_OF_DOCUMENT_TOKEN_TO_BE_REPLACED

Stuff like this makes it hard to take Glenn Greenwald seriously.

First, Clapper is a liar so Dems shouldn’t quote him about not wiretapping Trump

Shouldn't Democrats get someone more credible than James Clapper to make these denials? Like any randomly chosen person.

A few hours later, Clapper is a trusted authority on Trump’s (lack of) ties to Russia and we get a retweet of this.

END_OF_DOCUMENT_TOKEN_TO_BE_REPLACED

I can’t think of anyone on “the left” who uses this phrase constantly, can you?

That angst over what many in the White House call the ‘deep state’ is fermenting daily, fueled by rumors and tidbits picked up by Trump allies within the intelligence community and by unconfirmed allegations that have been made by right-wing commentators. The ‘deep state’ is a phrase popular on the right for describing entrenched networks hostile to Trump.

END_OF_DOCUMENT_TOKEN_TO_BE_REPLACED

So apparently we have a new chair of the DNC, Tom Perez, and he is a fine man and will make a good chair. He immediately appointed Ellison his co-chair or whatever. This will not stop the idiot left, because poutrage is so much fun and good for attention. Not to mention, while I personally have no problem with Ellison’s religion because as an obnoxious atheist it seems pointless to differentiate between different flavors of make believe, the fact is a large portion of our country would have a problem so this will make it easier in places where Democrats have had trouble as of late.

That won’t stop the manic progressives who decided to turn this DNC chair election into a proxy Clinton/Sanders primary, so just ignore them, mock them, or tell them to fuck off. If Trump isn’t enough to unite Democrats, these fucking people are worthless and we deserve him. I swear to god these Bernie bots read the Charge of the Light Brigade and learned all the fucking wrong lessons.

In other chair related news, the police in Washington, PA called before I left to pick up chairs and informed us they had ABC’s wallet (with everything in it!), so I went the long way to Pittsburgh, picked that up on the way, got the chairs, did a bunch of other chores, and made it home in one piece. Here are the new chairs, although we are re-doing the cushions (and again, that is a royal we which means I will stand and “help” until she just tells me to grab the dogs and to unass her area of operation). 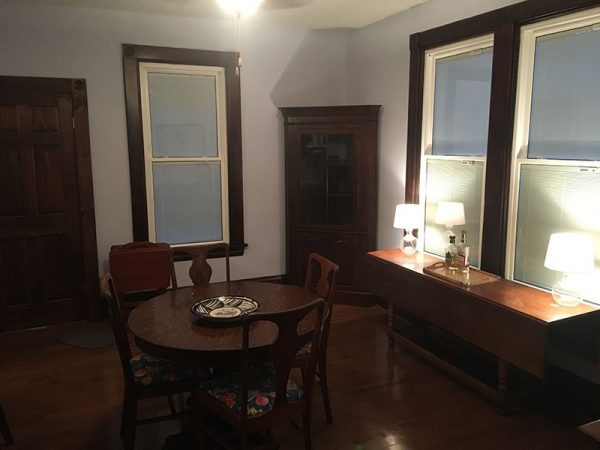