OBAMA IS WORSE THAN BUSH HE SOLD US OUT!!

You are here: Home / Archives for OBAMA IS WORSE THAN BUSH HE SOLD US OUT!!

Here’s a new report that concludes, as The Washington Post reports, that:

..raising the federal minimum wage to $12 an hour could prevent as many as half a million crimes annually, according to a new report from the White House’s Council of Economic Advisers, a group of economists and researchers charged with providing the president with analysis and advice on economic questions. (h/t Washington Monthly)

On the other hand:

…spending an additional $10 billion on incarceration — a massive increase — would reduce crime by only 1 percent to 4 percent, according to the report. 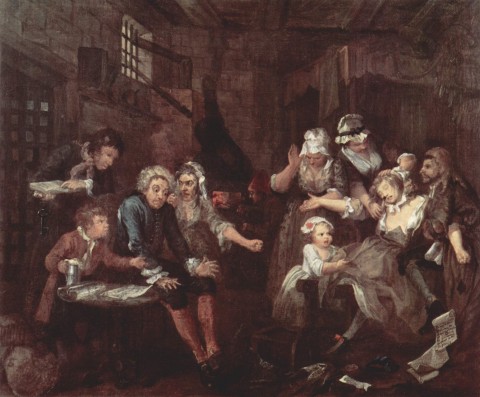 More (and, dear FSM, better) police would help too, the report suggests.  Here’s a fact I didn’t know:

Research consistently shows that departments with more manpower and technology do a better job of protecting the public, and the United States has 35 percent fewer officers relative to the population than do other countries on average….

Spending an additional $10 billion to expand police forces could reduce crime by as much as 16 percent, they project, preventing 1.5 million crimes a year.

Ultimately, the point being made through the data is that locking lots of folks up is — my gloss here — the mark of prior failures.  Or, if you’ve got the Obama gift for seeing the policy opportunity as well as the yawning need, you’d look at it this way:

In the report, the CEA argues for a broader analysis of the problems of crime and incarceration, touching on subjects that seem unrelated to criminal justice, such as early childhood education and health care. The authors of the report contend that by helping people get by legally, those other elements of the president’s agenda would be more effective in reducing crime than incarceration.

END_OF_DOCUMENT_TOKEN_TO_BE_REPLACED

Two data points that make me fairly confident of November even in an alternate universes with a mostly sane Republican party:

President Barack Obama’s job approval has hit an almost three-year high among Americans, according to Gallup.

Fifty-percent of Americans approve of Obama’s performance as the country’s chief executive, the highest level since May 2013. This is an uptick from his average approval rating during his seventh year in office, which was 46 percent, according to Gallup.

And the latest unemployment claims filing:

Initial US weekly unemployment claims fell by 18,000 over the week ending on 5 March to reach 259,000, according to the US Department of Labor

We’re at peace, there are jobs, and the incumbent President is reasonably popular.  Those are good fundamentals for any incumbent party.

END_OF_DOCUMENT_TOKEN_TO_BE_REPLACED

and the good news will probably continue for the first quarter of 2016:

So in 3 years, all of the data sources suggest that we’ve cut the uninsured rate in half and slowed the cost curve. There are another couple percentage points of easy gains once the rest of the Confederacy and the everyone between the Mississippi’s left bank and the Columbia’s south bank expand Medicaid.

Then we’ll actually need to take another whack to get the last 5% of the population covered AND get better coverage for 25% to 30% of the currently covered population.

END_OF_DOCUMENT_TOKEN_TO_BE_REPLACED

Here’s President Obama, writing in SCOTUSblog* on what he’ll look for in a Supreme Court nominee (h/t Washington Monthly):

First and foremost, the person I appoint will be eminently qualified.  He or she will have an independent mind, rigorous intellect, impeccable credentials, and a record of excellence and integrity.  I’m looking for a mastery of the law, with an ability to hone in on the key issues before the Court, and provide clear answers to complex legal questions.

Second, the person I appoint will be someone who recognizes the limits of the judiciary’s role; who understands that a judge’s job is to interpret the law, not make the law.  I seek judges who approach decisions without any particular ideology or agenda, but rather a commitment to impartial justice, a respect for precedent, and a determination to faithfully apply the law to the facts at hand.

But I’m also mindful that there will be cases that reach the Supreme Court in which the law is not clear.  There will be cases in which a judge’s analysis necessarily will be shaped by his or her own perspective, ethics, and judgment.  That’s why the third quality I seek in a judge is a keen understanding that justice is not about abstract legal theory, nor some footnote in a dusty casebook.  It’s the kind of life experience earned outside the classroom and the courtroom; experience that suggests he or she views the law not only as an intellectual exercise, but also grasps the way it affects the daily reality of people’s lives in a big, complicated democracy, and in rapidly changing times.  That, I believe, is an essential element for arriving at just decisions and fair outcomes.

Also — just in case you were worrying (I wasn’t and am not) that President Obama might take seriously for a moment any suggestion that he should punt on this choice, here’s all you need to know:

The Constitution vests in the President the power to appoint judges to the Supreme Court.  It’s a duty that I take seriously, and one that I will fulfill in the weeks ahead.

I will so miss this man.

END_OF_DOCUMENT_TOKEN_TO_BE_REPLACED

The CDC  has released their initial 2015 uninsured population counts.  Good news, for all residents of the US in the US through September 2015.  Remember, this percentage will go down a bit more as Montana and Alaska are expanding Medicaid and the 2016 Open Enrollment period pulled in more people. 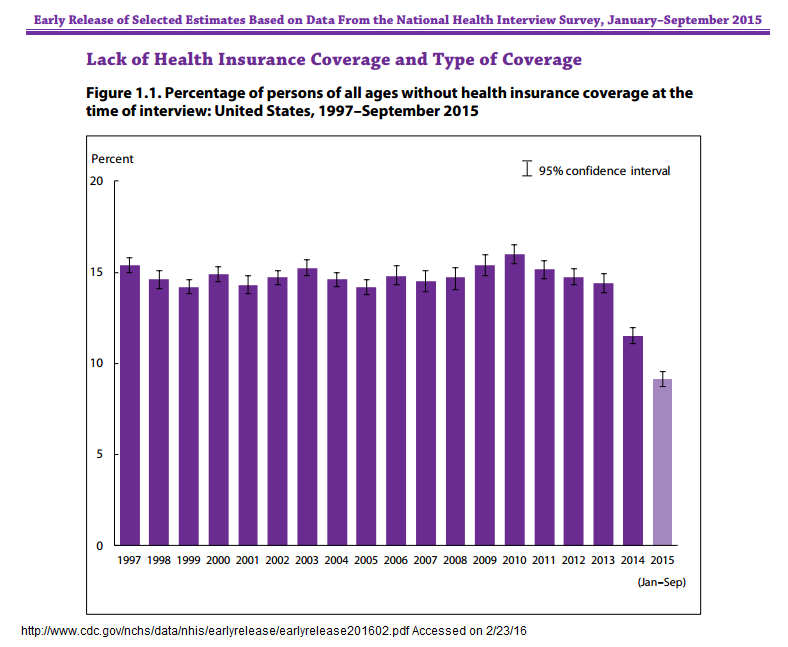 These numbers are a bit lower than Gallup and other sources because this data set includes kids and the elderly.  Both of those groups tend to have a higher insurance rate because there are more government programs aimed at those two populations.  Working age adults have a slightly higher than national average uninsured rate.

END_OF_DOCUMENT_TOKEN_TO_BE_REPLACED

The cost curve is bending to a lower slope of less cost acceleration.

We have observed many times that growth in health service prices remains extremely low, and this month’s trend report suggests that this trend is continuing, reporting an annual increase in health care prices for 2015 of 1.1 percent, the lowest recorded since Altarum’s series began in 1990. Given the flatness of this series, the two drivers of the recent growth in health spending have been coverage expansion and spending on prescription drugs.

In 2015, the nominal GDP growth was 2.9%.  Inflation was roughly 1%.  Healthcare price inflation was within rounding errors of general inflation.  This is extremely important news.

Everyone expected quantity of services to go up significantly. The CBO had projected a spike in GDP devoted to healthcare spending in 2014 and 2015 because it was projecting the US uninsurance rate to be cut in half.  Below is a November 2013 chart from the  White House  that shows how the CBO anticipated a spike: 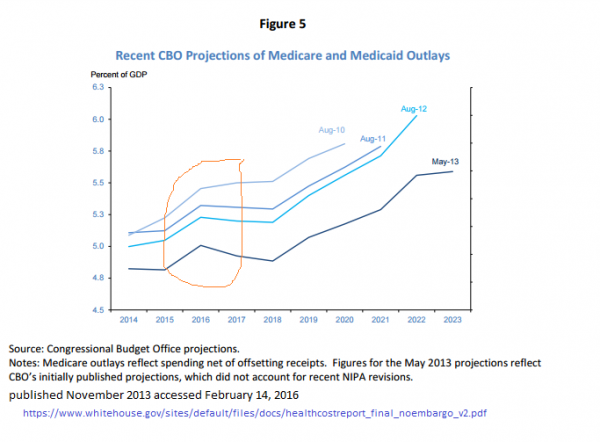 The RWJF research shows that spike shown through the data:

This month’s results are quite consistent with this foreshadowing. The quarterly trend in overall health spending growth using the Altarum Health Spending Economic Indicators series shows a clear peak in Q1 2015 at 6.7 percent, with subsequent declines every quarter. Partial data for Q4 (October and November) show a spending growth rate of 5.2 percent. While overall spending growth in 2015 will clearly exceed that of 2014, a reduction appears to be underway.

Total spending is a function of the average price per service and the number of services being sold.  Since we expanded access to health insurance and healthcare with the biggest wave of new entrants to the system happening in 2014 and 2015, the number of services being used should have gone up.  They did.  Some of that incremental increase was due to “catch-up care“.  That wave seems to have crested.  The rest of the increment is the “natural” healthcare utilization rate of newly insured people who have had their “gonna kill me now” problems taken care of.

Charles Gaba has argued, the easy large scale additions to the ranks of the insured is complete.

6. The remaining uninsured STILL haven’t a clue about the deadlines and/or tax penalties:

The final factor is one which I’ve written about before, and which there seems to be no obvious solution to: In spite of a massive outreach/marketing/eduction effort by HHS, CMS, HC.gov, the state exchanges, the private insurance carriers, Enroll America, Families USA, Planned Parenthood, the United Way and dozens of other organizations,people STILL had no idea about the deadline and/or mandate tax:

This will change once the large population former Confederate states expand Medicaid at some point in the next decade but there are not big pools of easy conversions readily available.

The cost curve is bending.  If prices can grow at roughly the rate of inflation and not even nominal GDP quite a few long term federal financing problems go from dire to manageable.

END_OF_DOCUMENT_TOKEN_TO_BE_REPLACED

This is a Big Biden Deal:

WH announces that it will allow States to use Medicaid data to automatically link low-income kids to school meals https://t.co/MPBQDjCnp4

Kids who have enough to eat and are not worried about having enough to eat have two significant advantages over kids who don’t have enough to eat and have to worry about that. The first is simple, they have more energy to spend on high intensity activities of play and learning (speaking as a dad of a first grader, those two things should be very close to the same a good chunk of the time). Secondly and slightly more subtly, kids who are not worried about their next meal are able to devote high complexity cognitive processes to other things. Kids (and adults) have a finite amount of brain horsepower available at any given time. Not worrying about food frees up capacity for other things. Kids who are worried about food are devoting a limited brain budget to that task and not to other things.

The free and reduced price school lunch program in most districts except for high poverty districts like the one my family lives in has a significant amount of paperwork and potential stigma attached. Some of that paperwork will deter people who qualify from signing up. Some proportion of those people who are deterred will have signed up for Medicaid or CHIP. Both of those programs have routine income verification processes. Both of those programs are far more valuable on a cash value basis than school lunches so the cost of not hurdling an administrative barrier is higher and more visible. Compliance is higher.

Allowing states to use pre-exisiting data to pre-qualify kids for free or reduced price school lunches will help a few more kids get a quality daily meal or two in their stomachs which should increase their well being in addition to improving school performance. It is also an example of the government working to actively improve peoples’ lives while streamlining the interaction.

This is a good thing now that it is optional. If we could only make it mandatory that states use Medicaid or SNAP eligiblity data to drive the full array of income qualified social services instead of silo-ing different categories of assistance so duplication and administrative burden increases wasted costs without providing qualified individuals the services and assistance that they need.