You are here: Home / Archives for Outrage

No matter how low you’ve seen them go, the Repubs can always find new depths!

this is absolutely mindblowing. imagine how broken your brain has to be to take part in this https://t.co/eSIwrpAPsU pic.twitter.com/QYVsCXikUI

I’m not embedding the video, but you can see it at Esquire, if you must. Their rebuttal:

… The horrors at Auschwitz were perpetrated by a government, not a terrorist organization. It was not some outside force acting on Germany: Adolf Hitler rose to power with the assent of the German people, and his crimes were possible—and, technically, legal—because he generally enjoyed the consent of a large segment of the population. The problem with Nazi Germany was not military weakness. It was the ideological depravity of a government run on a toxic brand of right-wing nationalism that demonized foreigners and multiple subgroups within German society—but most prominently, and terribly, Jewish people.

The last time Higgins made national headlines, it was when, in a Facebook post addressed to “all of Christendom” after a terror attack in London, he had a suggestion for how to treat every “radicalized Islamic suspect.”

“For the sake of all that is good and righteous,” he wrote, “kill them all.”…

This is what all visitors see at the entrance to the building where first homicidal gas chambers of Auschwitz was created by the SS. pic.twitter.com/6Mm5gTkfSl

You'd be forgiven for thinking: "Do you know who else thought strict homeland security and an invincible army were paramount?"

END_OF_DOCUMENT_TOKEN_TO_BE_REPLACED

I can’t believe more people aren’t talking about the last page of the Senate bill: 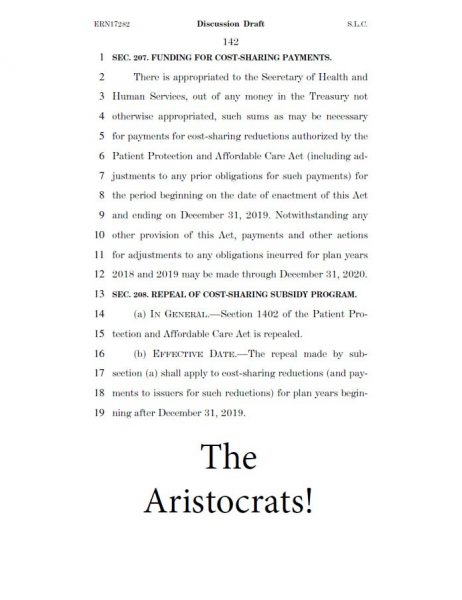 END_OF_DOCUMENT_TOKEN_TO_BE_REPLACED

Teresa May is a terrible politician:

They drove up in a green Range Rover – dog gates up at the back, although the corgis stayed at home – with so little fanfare several locals walked right past them, unaware of the identities of the latest well-wishers to Westway sports centre, applauding instead the firefighters who walked behind her.

In case you haven’t been following it, a housing block in London went up in flames – flames that were accelerated by non-fire resistant cladding applied to the building to make it look better to its Kensington neighbors. The gas lines laid in the stairways didn’t help either. At least 30 are confirmed dead and the death toll will probably be near 100 after all the bodies are found (if they can be – some will never be recovered).

END_OF_DOCUMENT_TOKEN_TO_BE_REPLACED

Guys, remember which reps decided to fuck you on your health insurance. You have 18 months to make them miserable before voting them out.

Get mad, stay mad and then be effective in doing something. Balloon Juice is adopting at least one district and perhaps more. We will be effectively active and angry.

Darrell Issa cast the 216th vote for AHCA, putting it over the top

END_OF_DOCUMENT_TOKEN_TO_BE_REPLACED

There is concern that there is a cluster or, perhaps, a spike in missing persons cases in the DC area where the missing person is either an African American or Latina teen girl.

The figure is startling — more than a dozen black and Latina teens have been reported missing in D.C. since March 1.

The apparent jump in the number of missing young people in the District has raised concern in neighborhoods and on social media.

Teen Vogue’s headline: “Most media outlets aren’t reporting on the disappearance of Black and Latinx D.C. teens.” Vibe’s report: “10 Black and Latinx teens missing in D.C. and the media is silent.”

As indicated by the social media response, DC authorities are taking the issue seriously.

Chanel Dickerson, who recently became commander of the D.C. police’s Youth and Family Services Division, said she was shocked by the number of missing children in the District. She said many of the cases involved runaways and she has pledged to publicize each case and provide equal service to all.

The 211 people who went missing in January did not reflect an increase in cases, Dickerson said, just better reporting by the families. While that may be true, it is far from reassuring. Few believe that the children are being snatched off the street in mass, but they do think that the children are endangered.

Sharece Crawford, a member of an Advisory Neighborhood Commission in Southeast Washington, said she believed that more black girls were getting involved with gangs and also being forced into prostitution.

“What we need is a citywide alert about the dangers out here and how parents can protect their children,” Crawford said. “Residents are very worried. They are wondering if the city is taking this seriously. They say things like, ‘If white girls were disappearing uptown, there would be a state of emergency.’ ”

The good news is that some of the missing teens are being found.

Amongst the teens missing, it’s been reported that 13-year-old Taylor Innis has been found in “good health.” Missing teen Antwan Jordan has been found safe.

Here’s the picture arrays with the pertinent information from one of the Essence authors/reporters.

It takes 3.2 secs to retweet and help find these 8 BLACK GIRLS reported missing in Washington, D.C. during the past three days (1/2) pic.twitter.com/xpEwNcW44S

It takes 3.2 secs to retweet and help find these 8 BLACK GIRLS reported missing in Washington, D.C. during the past three days (2/2) pic.twitter.com/kaP15Bk4Kk

END_OF_DOCUMENT_TOKEN_TO_BE_REPLACED

I just can't get over this argument.

"Look at the size. This is the Democrats. This is us." pic.twitter.com/0lPfRxFvMf

Remember the ‘tube sock full of dog turds‘ I mentioned earlier? I think someone hit Sean Spicer across the back of the head with it.

"Our hard constraint on the plan's size was that president Trump had to be able to hold it in one of his very tiny hands." https://t.co/Az5xFg06fq

Well, yeah, it doesn't need to be very long because it doesn't repeal the ACA! https://t.co/HZ52AG5aRS

Currently stress eating so it may end up being a half-filled box unless someone asks soon.

And he may not have been the only victim…

Video of HHS Secretary Tom Price claiming Medicaid has "decreased the ability for folks to gain access to care."https://t.co/H6CMt6JelH

Tom Price just put down a marker worth keeping in your ACA google doc. "We believe strongly that we will see a decrease in premiums."

Every GOP legislator gets free healthcare for doing a comically easy job.

Lemme fix that for you pic.twitter.com/DAnl1Wi5sW

END_OF_DOCUMENT_TOKEN_TO_BE_REPLACED

When a Republican tells you the Affordable Care Act is really unpopular, please remind them that is much more popular than Trump

No matter how cynical you try to be…

House is going to start having committee votes on Obamacare bill on Wednesday that they released to the public at 6 p.m. today. No CBO score

Thus beginning the process of the GOP leadership hoping the WH nudges the Freedom Caucus members along on this https://t.co/TC9hPOtkMT

In the replacement bill, Medicaid becomes a voucher. This bill is radical, not conservative. https://t.co/e9M1AYEpRD pic.twitter.com/ygfjxh5ueH