Riveted By The Sociological Significance Of It All

You are here: Home / Archives for Riveted By The Sociological Significance Of It All

Brad DeLong has an interesting review of a biography of Milton Friedman. He writes:

Part of what made Friedman a worthy adversary for American liberals was that he had a fully formed worldview, one that started with a bedrock commitment to people, to their ability to make judgments for themselves and to decide what they like best. Out of this commitment grew an imperative to maximize individual freedom. On top of that came the judgment that free markets are almost always the silver bullet to solve all of society’s problems, as well as a powerful conviction that the facts, if honestly examined, will always be on his side. And on top of that was layered a fear and suspicion of government as an easily captured tool for the enrichment of the cynical and powerful, who grab what they can.

But, perhaps more seriously, Friedman ducked the big questions regarding the relationship between economic freedom and political liberty, and he was completely incapable of seeing that political liberty is both a negative and a positive liberty: freedom from tyranny and oppression but also the freedom and power to decide on and accomplish our common purposes. These are the master questions of history and moral philosophy, and for all his brilliance and hard work, Friedman is of absolutely no help in answering them. As Posner says, Friedrich Hayek’s Road to Serfdom “flunks the test of accuracy of prediction ” [The] view that socialism of the sort that Britain embraced under the old Labour Party was incompatible with democracy [is] extreme and inaccurate.” Yet Friedman bought into that Hayekian view. And in so doing, he ultimately led his followers, and tried to lead the rest of us, down a false path.

DeLong also mentions that he himself agrees with Friedman’s monetarist explanation (novel at the time) of what caused the Great Depression and that he regards Friedman as a mostly reality-based “first class” intellect.

I can’t help but think that the problem with Friedman’s intellectual legacy (I think it’s fair to say that the Chicago school of economics has been an unmitigated disaster during the last decade, at least) has more to do with the underlying nature of contemporary conservatism than with Friedman himself. Contemporary conservatives, too often, have a mystic belief in certain texts, gurus, and ideas. American exceptionalism, THE CONSTITUTION, Hayek, Friedman, the bible, free markets, magic dolphins…once upon a time the genius George W. Bush.

They’re almost all like this, whether they couch it in terms of religion (Ross Douthat) or even some kind of neuropseudoscientific marshmallow test mumbo jumbo (Bobo). There’s always a magic bullet right around the corner, or buried just beneath the sands of time.

There are plenty of important far-left writers who I enjoy reading and who have influenced how I see things, Marx and Chomsky, for example. But I don’t see them as infallible and while I find their analysis often brilliant, I probably disagree with their prescriptions at least as much as I agree with Friedman’s.

Like a lot of liberals, I see the future as a hard slog that can hopefully be ameliorated by smart liberal policies, but I don’t think that if everyone went back and read this or that book, we’ll have paradise on earth or that understanding neuropathways better will move us all that far towards a utopia.

And, to me, that’s a crucial difference between the right and the left right now.

END_OF_DOCUMENT_TOKEN_TO_BE_REPLACED

Look.  Just before I get to the snark, I want to recall that the Democrats do not have a guaranteed lasting tech advantage. The machine knowns no party.  There are plenty of smart GOP leaning engineers.  Even more important, tech is a tool in politics, not  a magic wand — as DougJ pointed out a couple of days ago.  One of these days we’ll be back at a point of parity in the computer wizard department.

That said, I can’t help thinking that the latest GOPster attempt to bottle their answer to Obama’s data magic isn’t off to a great start.  Not with boss talk like this:

Mike Shields, chief of staff for the RNC, told NBC he’s begun the work of “fundamentally restructuring” the organization’s use of technology ….

Lots of ways to snark this, and I’m sure you all can fill that parameter space pretty well.

He actually said that?  That’s so…sweet, almost. So very ’90s.  If I’m a Republican techie hearing that, I’m weeping into my medicinal a.m. cocktail.

Put it another way:  I don’t see the RNC approaching nerdvana until Reince Preibus and his minions actually get this joke: 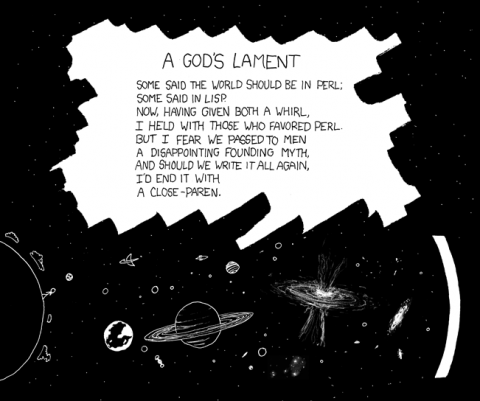 (Via the irreplaceble xkcd.)

END_OF_DOCUMENT_TOKEN_TO_BE_REPLACED

No one reads Mark Halperin anymore but this is a fascinating look into his mind:

If 2016 brings a Hillary Clinton-Jeb Bush contest (a bigger “if” for me than for many of my colleagues, but still…), the dynamics will be fascinating. Neither will go unchallenged for the party nomination, but both might avoid having to strain to become the standard bearer, fluently brandishing the elements required to win: money, fame, access to the media, compelling personal/political narratives, policy chops, top-shelf staffing, support from both elites and the grassroots, and the experience borne from a professional lifetime at the very highest levels of American politics.

Although both would face nomination competitors, there is a very solid chance Jeb and Hillary could emerge largely unscathed as general election candidates, and not forced to the extremes of their respective parties. They would both almost certainly follow the Bill Clinton-George W. Bush model, running in the ideological center throughout the entire race, with announcement speeches mirroring their convention acceptance speeches. In fact, on some issues, Jeb Bush might actually turn out to be more moderate than Hillary Clinton, and Clinton more conservative than Bush.

Jeb Bush has already succumbed to teahadist pressure on one of the most important issues in presidential general elections: immigration reform. And the primary is three years away. The notion he’s going to win while keeping to the middle is laughable.

The disconnect between pundits and voters on the subject of the Bush family is truly profound: W left office one of the most unpopular presidents in history. We regularly read right-wingers tell us that W wasn’t a “real conservative”.

And now the red sea will part and let us brother waltz to the nomination?

END_OF_DOCUMENT_TOKEN_TO_BE_REPLACED

Josh Marshall Brian Beutler has good piece up on what he describes as “The Establishment’s Obama Derangement Syndrome”.

I think things are a bit more complicated than he makes it out to be. For example, pundits like David Ignatius and Joe Klein say “both sides are doing it” because that’s what they say about everything, whereas pundits like Bob Woodward and Ron Fournier are explicitly blaming Obama because Woodward and Fournier are conservatives who side with Republicans on most everything.

The latter group doesn’t interest me so much, because that’s how things work with all conservatives. The former group is sort of interesting to me because I think the paradigm that they cling to is slowly dying. Younger non-partisan establishment journalists — like Michael Grunwald and Ezra Klein — are mostly saying (accurately) that Republicans refuse to make any compromises whereas Obama has offered quite a lot of compromise. The older ones are uniformly repeating the “both sides do it” mantra.

“Both sides do it” won’t die out altogether anytime that soon, but I think we may have hit and passed Peak Both Sides Do It.

END_OF_DOCUMENT_TOKEN_TO_BE_REPLACED

In Frederick Exley’s excellent A Fan’s Notes, the narrator describes how he set out to read a long list of great books from 1800 to the present but ended up never getting too far into the moderns because he found the pre-moderns’ — especially Dostoevsky’s and Hawthorne’s — treatment of human psychology so much more fascinating. Who needs Freud when you’ve Goodman Brown and the underground guy?

I thought of this when I was reading that dumb Walter Kirn piece about how shooting guns changes your neural pathways. Contemporary political analysts — especially but not exclusively Bobo — blab on endlessly about neural pathways and using neuroscience (or what they think of as neuroscience) to understand what motivates humans. But they rarely bother to ask simple obvious questions like this one:

If you were a GOP leader, and every time you were intransigent the Beltway blamed Obama’s failure to lead, would you be less intransigent?

END_OF_DOCUMENT_TOKEN_TO_BE_REPLACED

I haven’t read watched the interview yet…what’s the over/under on the number of times he said “man”?

END_OF_DOCUMENT_TOKEN_TO_BE_REPLACED

Greg Sargent on the Centrist Death Cult and how it enables Republicans:

The GOP’s explicit position is that no compromise solution of any kind is acceptable — this must be resolved only with 100% of the concessions being made by Democrats — which means any compromise Dems put forth is by definition a nonstarter at the outset.

Analysts reluctant to embrace this conclusion — an affliction I’ve called the “centrist dodge” — have adopted several techniques. One is to pretend Dems haven’t offered any compromise solution, when in fact they have. A second is to argue that, okay, Dems have offered a compromise while Republicans haven’t, but Dems haven’t gone far enough towards the middle ground, so both sides are still to blame for the impasse. (The problem with this dodge is that it fails to acknowledge that Republicans themselves have openly stated that there is no distance to which Dems could go to win GOP cooperation, short of giving them everything they want.)

We’re now seeing a third technique appear: Acknowledge that Republicans are the uncompromising party, but assert that it’s ultimately on the President to figure out a way to either force Republicans to drop their intransigence or to otherwise “lead” them out if it.

I’ve never understood why anyone thinks presidents have the magical ability to get Congress to pass stuff that Congress doesn’t want to pass. It’s not just Obama who isn’t magical; Bush couldn’t get immigration reform or Social Security privatization through.

I remember when it was the firebaggers who wanted Obama to be more magically powerful about health care reform. Jim Newell summed it up well:

I’m sure if Obama just had the bill on his desk and gave it to Congress and told them to pass the damned thing, Congress wouldn’t have objected or tried to change anything, and the Senate would’ve passed it all 100-0 through reconciliation—even if they didn’t need reconciliation. This is what the spineful George W. Bush would have done.

Now, it’s the Villagers who want it, and comparison is of course, Reagan and Tip.

But it doesn’t matter how much Ron Fournier and David Brooks blame the sequester on Obama. If the levee breaks, and the cuts comes, local media will give the cuts plenty of coverage, and Republicans will take a political hit.

I sincerely hope sequestration can be avoided. I think it would be terrible for the economy. Like Tim F, I have friends whose scientific careers would be adversely affected.

But if it comes, Bobo and Fournier and Woodward won’t be able to save Republicans’ sorry asses.