You are here: Home / Archives for Sweet Fancy Moses!

Via TPM, here’s a crazy story out of Ukraine about a Russian journalist (and Kremlin critic) who was reported killed yesterday:

Russian journalist Arkady Babchenko turned up at a news conference in the Ukrainian capital Wednesday less than 24 hours after police reported he had been shot and killed at his Kiev apartment building. The country’s security services said Babchenko’s death was faked to foil a plot to take his life.

Ukrainian police said Tuesday that Babchenko, a strong critic of the Kremlin, was shot multiple times in the back Tuesday and found bleeding there by his wife. Authorities said they suspected he was killed because of his work.

Vasyl Gritsak, head of the Ukrainian Security Service, announced at a news conference Wednesday that the security agency and the police had solved Babchenko’s slaying. He then startled everyone there by inviting the 41-year-old reporter into the room.

To the applause and gasps of the press, Babchenko took the floor and apologized to the friends and family who mourned for him and were unaware of the plan.

Ukrainian investigators detected an assassination plot and faked the journalist’s death to foil it, then arrested the conspirators. Maybe all countries targeted by Russia need to get more creative to keep Putin’s henchmen from acting with impunity.

END_OF_DOCUMENT_TOKEN_TO_BE_REPLACED

JUST IN: Under Secretary of State Steve Goldstein is being fired for contradicting the account of Rex Tillerson’s dismissal, White House official tells @PeterAlexander

END_OF_DOCUMENT_TOKEN_TO_BE_REPLACED

When we last discussed GOP Rep. Trent Franks, he was announcing his his retirement on 31 January for the following:

I have recently learned that the Ethics Committee is reviewing an inquiry regarding my discussion of surrogacy with two previous female subordinates, making each feel uncomfortable. I deeply regret that my discussion of this option and process in the workplace caused distress.

We are in an unusual moment in history – there is collective focus on a very important problem of justice and sexual impropriety. It is so important that we get this right for everyone, especially for victims.

But in the midst of this current cultural and media climate, I am deeply convinced I would be unable to complete a fair House Ethics investigation before distorted and sensationalized versions of this story would put me, my family, my staff, and my noble colleagues in the House of Representatives through hyperbolized public excoriation. Rather than allow a sensationalized trial by media damage those things I love most, this morning I notified House leadership that I will be leaving Congress as of January 31st, 2018. It is with the greatest sadness, that for the sake of the causes I deeply love, I must now step back from the battle I have spent over three decades fighting. I hope my resignation will remain distinct from the great gains we have made. My time in Congress serving my constituents, America and the Constitution is and will remain one of God’s greatest gift to me in life.

Today we learn his resignation is taking place immediately. Wonder why? Oh:

Arizona Rep. Trent Franks allegedly made unwanted advances toward female staffers in his office and retaliated against one who rebuffed him, according to House GOP sources with knowledge of a complaint against him.

The allegations, which reached Speaker Paul Ryan and top GOP leaders in recent days, led to Franks’ sudden resignation this week. Franks originally announced that he would resign on Jan. 31, 2018. But just hours after POLITICO inquired about the allegations, he sped up his resignation and left office Friday.

The sources said Franks approached two female staffers about acting as a potential surrogate for him and his wife, who has struggled with fertility issues for years. But the aides were concerned that Franks was asking to have sexual relations with them. It was not clear to the women whether he was asking about impregnating the women through sexual intercourse or in vitro fertilization. Franks opposes abortion rights as well as procedures that discard embryos.

A former staffer also alleged that Franks tried to persuade a female aide that they were in love by having her read an article that described how a person knows they’re in love with someone, the sources said. One woman believed she was the subject of retribution after rebuffing Franks. While she enjoyed access to the congressman before the incident, that access was revoked afterward, she told Republican leaders.

Life comes at you fast.

END_OF_DOCUMENT_TOKEN_TO_BE_REPLACED 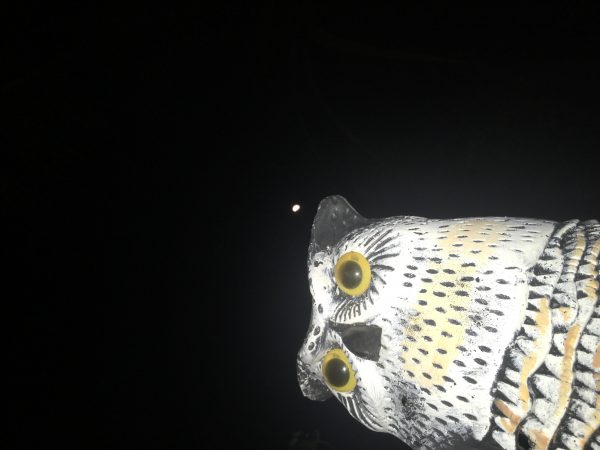 END_OF_DOCUMENT_TOKEN_TO_BE_REPLACED

Plenty of other sites feature reader-submitted scary stories on Halloween, but we’ve proved in the past that ours are better. Can we do it again this year? Maybe!

I shared my only firsthand ghost story a couple of years ago, but I have one from my mom to tell.

Mom went to high school in Inverness, Florida in the 1960s. Inverness is so-named because it’s somewhat hilly for Florida, and the countryside is dotted with lovely lakes that supposedly inspired a homesick Scotsman to give the town its name.

Mom said there wasn’t much to do in town for high school kids back in the JFK era. There was one malt shop (“the Creamette,” it was called) that they frequented under the watchful eyes of adults.

Aside from that, boat launches along the lakes were popular places to park and hang out after dark. Mom told us kids back then would find a place to park, listen to their car radios, smoke cigarettes and sip liquor stolen from their parents. (Pretty much the same shit their kids would do in the 1980s, in other words.)

Anyhoo, the ghostly encounter I’m about to describe concerns one of my mom’s high school friends, who had died in a mysterious boating accident. Mom’s friend had drowned in a lake while out boating with her mother and stepfather.

It was considered mysterious because my mom’s friend was a strong swimmer, and the lake where the accident occurred was shallow enough that you could stand up almost anywhere in it and walk to shore if your boat capsized or you fell out. Also, there was a lot of turmoil in that family, which made people suspicious. It was and is a small town.

So, many months after the accident, a carload of high school girls, my mom among them, pulled into the parking lot adjacent to a boat ramp. They had stolen someone’s dad’s bottle of Old Crow and were drinking that mixed with Cokes, smoking Pall Malls and listening to “Johnny Angel” on the radio.

It was a foggy night with no moon. A distant street light at the far end of the parking lot provided the only illumination. Mom said they had briefly discussed the friend they’d lost upon arriving at the lake where the boating accident happened, but the conversation soon turned to other things.

Mom said she was engaged in conversation with a friend who was sitting on the hood of the car, laughing about something, when the friend suddenly stopped laughing, looked horrified and pointed with her cigarette toward the lake.

All turned and saw their dead friend standing right where the shadows cast by the lakeside trees gave way to the dim light of the streetlamp. Mom said the apparition looked just as real to them at that moment as their friend had in life, and she was trying to say something.

Mom vividly remembered that their friend was gesturing with her hands, and her lips were moving. But whatever she said was lost in the din of the girls’ screams.

They piled into the car and roared off into the night, leaving their bottle of Old Crow behind. No one had the nerve to go back and retrieve it until the sun came up. They swore they’d never park by that lake at night again.

When repeating this tale, Mom always told us she regretted that terror had stopped her and her companions from listening to what their dead friend was trying to say. Maybe she was going to tell them what had happened to her — that her stepfather had killed her or something. But they never saw her again.

So, did they really see a ghost? I don’t think so. They were half-drunk teenagers and susceptible to the power of suggestion. But they believed they did, for the rest of their lives. And though I don’t believe in ghosts, I’m not sure I’d have the courage to stake out that lakeside parking lot, play “Johnny Angel” and look toward the lake on a moonless night.

END_OF_DOCUMENT_TOKEN_TO_BE_REPLACED

Thought I saw a commercial for a “Dynasty” reboot the other day. Can that be true? It might as well be; seems we’re doomed to relive the worst of the 1980s, what with Blake-Biff Ewing in the White House and all. Via CNN:

President Donald Trump’s first wife, Ivana Trump, called herself “first lady” in an interview Monday ahead of the release of her memoir, “Raising Trump.” Now his current wife, first lady Melania Trump, is firing back, slamming her comments as “attention-seeking and self-serving noise.”

Maybe the First and Third Ladies can don massive shoulder pads and stage a pay-per-view steel-cage death match in the Rose Garden. They could raise a ton for cyber-bullying charities.

END_OF_DOCUMENT_TOKEN_TO_BE_REPLACED

Seven years ago today, legendary blogger, commenter and pie-filter baker Cleek came down from the mountaintop toting a stone tablet inscribed with one short sentence and gave Cleek’s Law to the world: 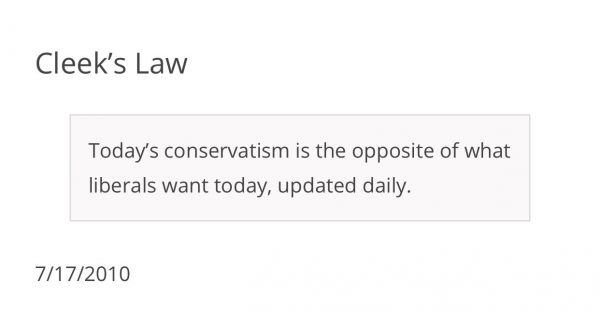 It has served as a handy Rosetta Stone for interpreting the motivations of so-called “conservatives” ever since. Others have expressed similar concepts with enviable eloquence. Valued commenter Davis X. Machina’s “sparrows and old curtain rods” is a classic of the genre. But for my money, Cleek’s simple, elegant formulation remains without peer as an all-purpose “conservatism” explainer.

The law’s anniversary came to my attention a few days ago when I hunted the quote as a response to someone on Twitter who expressed astonishment at hawkish and jingoistic Republicans’ embrace of Putin and Russian interference in the U.S. election. It all makes sense when seen through the lens of Cleek’s Law — evangelicals’ embrace of a degenerate, Republican women’s support for a misogynist, fiscal hawks’ enthusiasm for a corrupt tax cheat — all of it.

If only there were a way we liberals could convincingly pretend to be in favor of codifying Grover Norquist’s tax policy, Ann Coulter’s immigration views, Falwell Jr.’s interpretation of Christianity, Jefferson Beauregard Sessions’ notions of white supremacy, Rick Perry’s ignorance of science, Wayne LaPierre’s reverence for firearms, etc. If we could pull that off, we might usher in an age of rationality and sound governance that would put the Enlightenment in the shade.