You are here: Home / Archives for Sweet Fancy Moses!

Here’s a former FBI agent and current senior fellow at the Foreign Policy Research Institute, Clinton Watts, saying he doesn’t know what the US stance on Russia is under Trump and isn’t confident the U.S. government has his back if Russian agents come after him for testifying:

Frmr FBI agent says he doesn't know what USA stance is on Putin under Trump; concerned about safety after testifying pic.twitter.com/IKLB5z8jYh

That’s kind of astonishing. Before that, Mr. Watts answered a question from Senator Lankford (R-OK): “Why did the Russians think they could get away with [meddling in the U.S. election] this time?” I can’t find embeddable video of the exchange, but you can see it here on CNN. Watts’ answer in a word was: Trump.

Watts said Trump and Manafort repeated fake news from Russia, which we knew, but it’s…surreal to hear this said in a U.S. Senate hearing. He informed the committee that Russian outlets are still pushing conspiracy theories at Trump on social media even now. He also said that until people (Trump!) learn to distinguish fact from fiction, we’re in deep shit (paraphrasing). Wowser!

END_OF_DOCUMENT_TOKEN_TO_BE_REPLACED

Likely from the golden commode at the tackily ostentatious throne room at Disgraceland this morning, Trump dropped the following nuggets on Twitter: 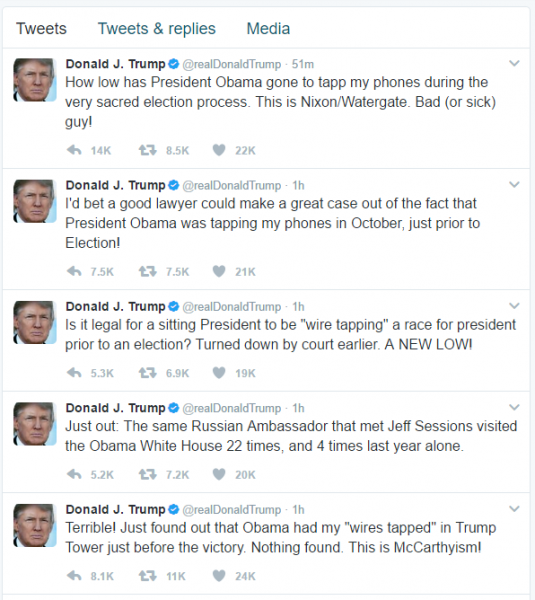 As I’ve done repeatedly in this nightmarish political cycle, I double-checked to make sure it was actually his account rather than one of the many parodies. The news sites are just now picking it up, so it’s apparently legit.

This is a serious charge, and since Trump is a pathological liar, few outside of Cult 45 are going to take his word for it. WTF? Trying and failing to imagine the end game here. What do you think?

END_OF_DOCUMENT_TOKEN_TO_BE_REPLACED

Or does this seem like something a paranoid, unhinged demagogue who doesn’t understand the role of the press in a free society would say?

The FAKE NEWS media (failing @nytimes, @NBCNews, @ABC, @CBS, @CNN) is not my enemy, it is the enemy of the American People!

I showed it to my husband (who doesn’t do the Twitter), and he thought it was a parody account. If only!

ETA: I mean what the actual FUCK? Enemy of the American people? Don’t we go to war with enemies? This is General Franco-level shit.

END_OF_DOCUMENT_TOKEN_TO_BE_REPLACED

The embattled administration’s talking points have been distributed, with two words underlined in gold Sharpie: MOVE FORWARD. First up, Mouth of Shitgibbon Kellyanne Conway on the Today show:

Next up: GOP back-bencher Rep. Chris Collins (R-NY) on CNN:

The tweeted summaries don’t do either segment justice. Lauer points out that Team Shitgibbon was told Flynn was compromised more than a month ago, and yet Flynn was functioning as the highest level adviser right up until yesterday — that’s the part that “makes no sense.” And Conway can’t and doesn’t even attempt to explain it.

Collins’ response is even weirder: After the “hoocoodanode” response didn’t pass the laugh test, Collins asserts an aggressively ignorant “50 First Dates” approach to governance, wherein every day is a new day, and treason that happened last month is treason under the bridge, damn it, so why dwell on such unpleasantness?

Both remain implacably focused on the future — move along, citizens, nothing to see here! Both (but especially Conway) maintain a flat affect when responding to their questioners’ rising incredulity, wearing expressions reminiscent of psychologically traumatized kidnap victims forced to read a denunciation of their captor’s enemy on camera. In this case, the enemy is truth.

Team Shitgibbon had all night to cobble together a media strategy to contain the damage of the Flynn implosion. That this was the best they could do is telling. Popcorn futures will skyrocket at the opening bell, and I hope one particular woman in Chappaqua has an inexhaustible supply of gourmet kettle corn laid aside.

ETA: I am calling my elected officials today — yes, even Lil’ Marco — to urge them to support a comprehensive, independent investigation of the Trump administration’s ties to Russia. I encourage y’all to do the same.

Honest to dog, it’s like Rubio’s primary programmer installed a loop in their skulls! Spicer will probably seize up upon the 40th repetition and have to be tag-teamed by the Miller Ragebot.

END_OF_DOCUMENT_TOKEN_TO_BE_REPLACED 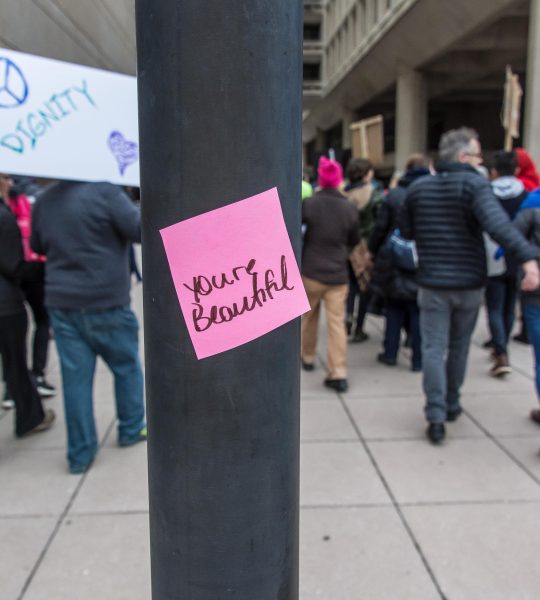 The last of my photos. I cannot tell you how much having all your emails and photos in my inbox got me through this week.  Thanks for entrusting your journey with me and I hope I covered everyone and didn’t misplace any, it wasn’t intentional.

The top photo and these are from Mingobat f/k/a Karen in GA: 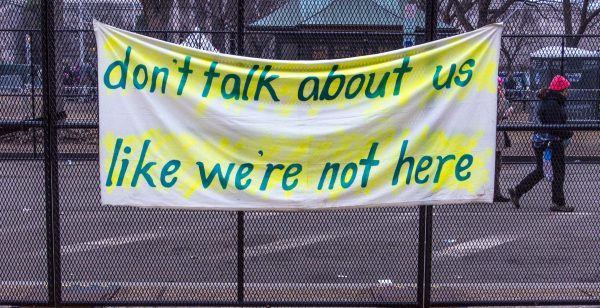 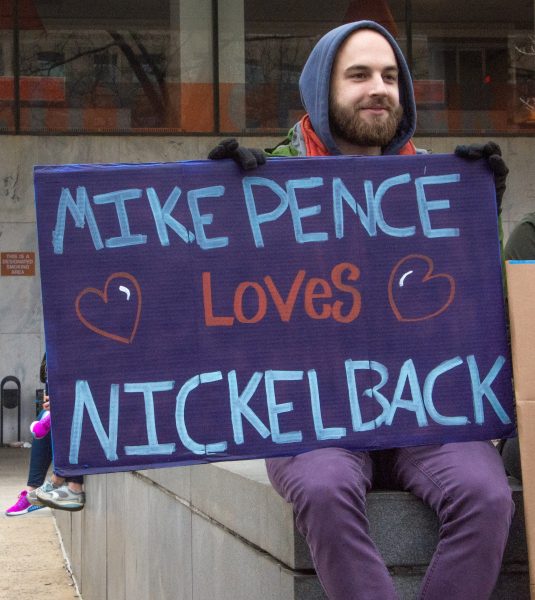 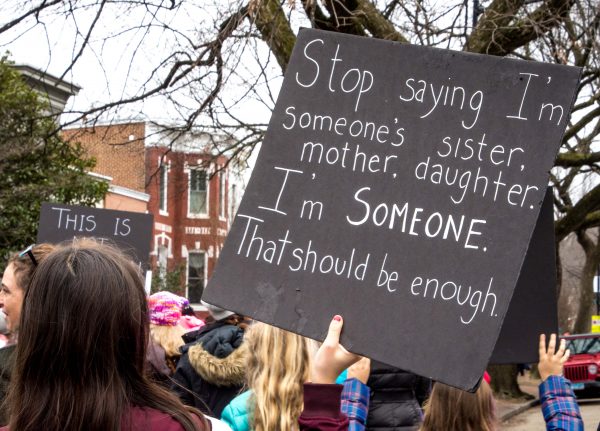 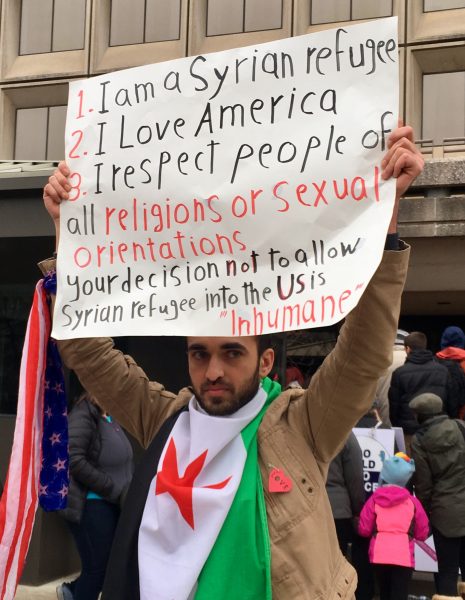 comrade scott’s agenda of rage sent in several from the St. Louis march and I had a hard time choosing:

END_OF_DOCUMENT_TOKEN_TO_BE_REPLACED 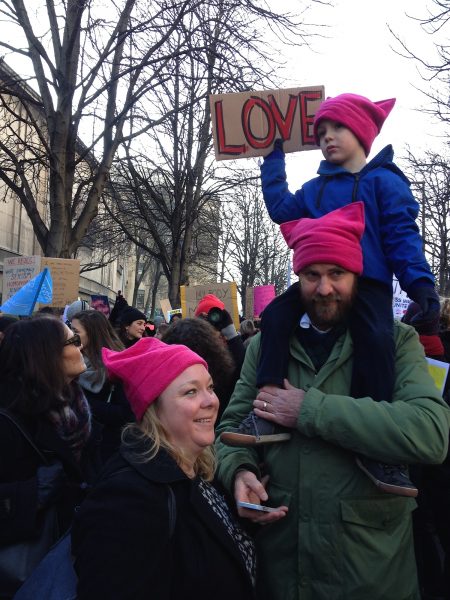 I thought this deserved to be FP:

A note on ‘the Democrats sold us out:

Your youth and naivete are adorable, love you, really.

Let me try this one more time in case the static breaks up at the perfect moment…The Democrats in office are the opposition. Yes, they should *oppose* every damn thing Trump proposes, and the winners (Gillibrand/Heinrich 2020) have that figured out. But they are not going to resist. That is not their job. It is our job. And if we do it long enough, and thoroughly enough, by pushing, pulling and dragging citizens who don’t care about politics out of the grey zone and onto our team…elected Democrats will do what we tell them to. Because they will be afraid not to.

And that, ladies and germs, is how we got Democrats to govern in the 20th century. The New Deal, the Voting Rights Act, health insurance that has to cover mammograms, marriage equality…all of those nice things didn’t just happen because Democrats are nicer, smarter and more enlightened. (Though that has since become true, more’s the pity.)

When I first attended a topical protest, 19 states enforced sodomy laws. Don’t try to tell me protest doesn’t work, because I know it does. I also know that no elected Democrats got in front of the tidal wave for marriage equality until the alternative was to lose their seats.

Light up their phones and faxes, one issue at a time, be consistent, and don’t be afraid to mass. Democrats aren’t going to lead us, but they will follow us.

Here are a few more photos…believe it or not, I still have some…so the good feels shall continue until moral improves (or at least until tomorrow).

From the Kansas March:

My niece and her friends. My niece made all the signs herself, Every time I talk with her, she gives me so much damn hope for the future. 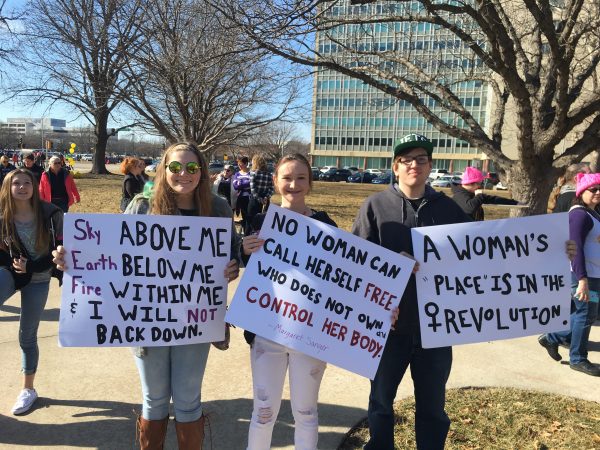 We had 4,000 people show up in front of the Kansas Capital. Lots of pink hats. Warm, wonderful crowd. Even great weather. I’m still kinda buzzing about it. Especially here in Kansas, where it’s always wonderful to find fellow lefties. Whenever I stumble across someone like that in the rural area where I live, it’s like meeting a long lost friend. 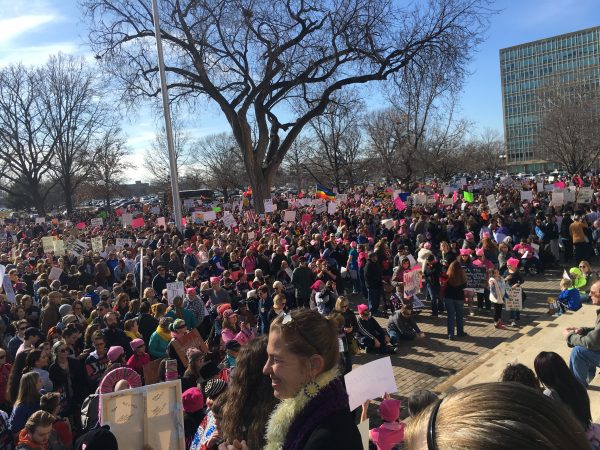 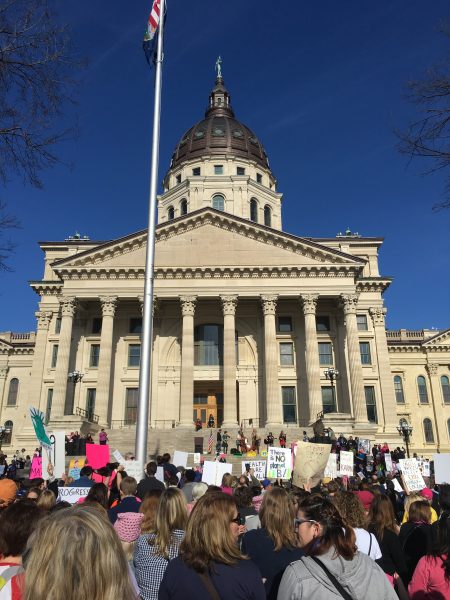 You know how I love my links, Valerie made a slideshow of all the great DC photos she had, click here

To find out who this handsome fellow is, you’ll have to check below the fold.

END_OF_DOCUMENT_TOKEN_TO_BE_REPLACED

I probably have enough photos for one more long post tomorrow. I find all these photos and BJers comments heartening. We can do this, don’t let the latest news cycles rob you of that feeling. 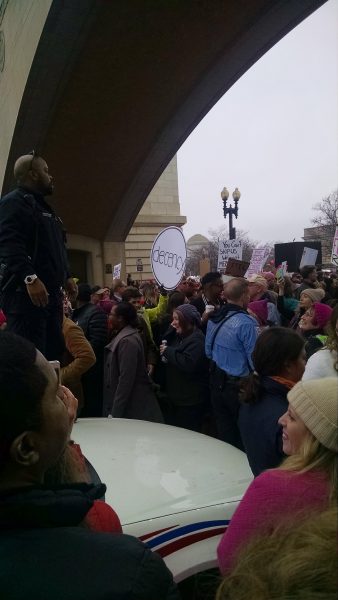 From Joel, more DC march (and I know I’ve been saying 3-4 pic limit, but these were sent in before that and I had a difficult time choosing)

So a line of cop cars tried to drive through but became engulfed by the crowd where we were.  An officer in the front of the line called out to this one who was close to the end and asked him to try and back up.   he gets up onto the hood of his car and looks behind, turns around and yells back to the front of the line “we can’t go anywhere, there’s a hundred thousand people back there!” evoking a huge roar from the crowd.  Cops were very cool – high-fiving everyone in the crowd as they worked their way through. 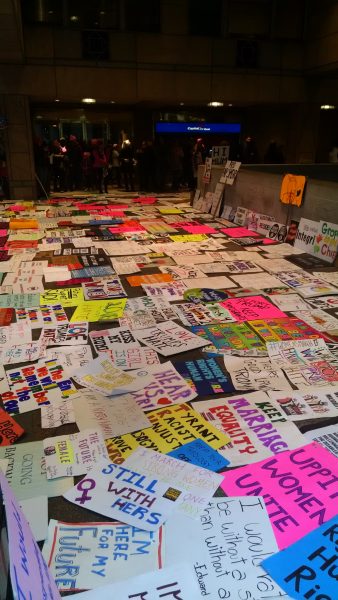 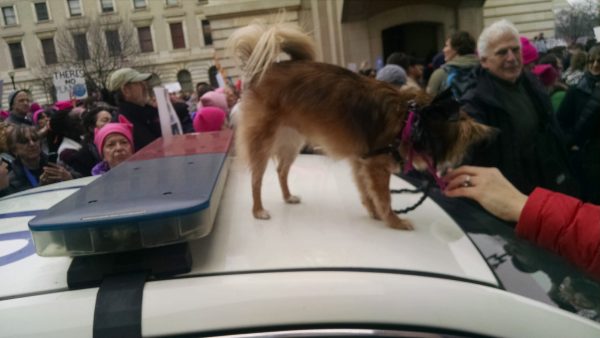 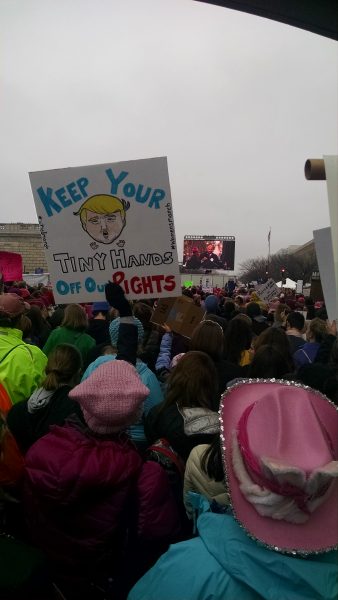 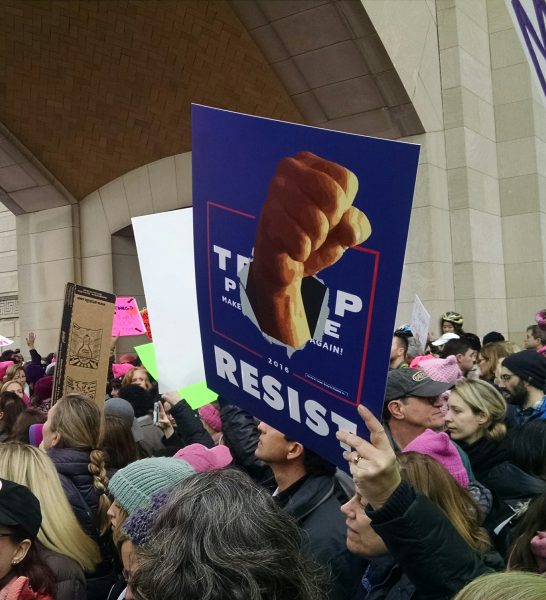 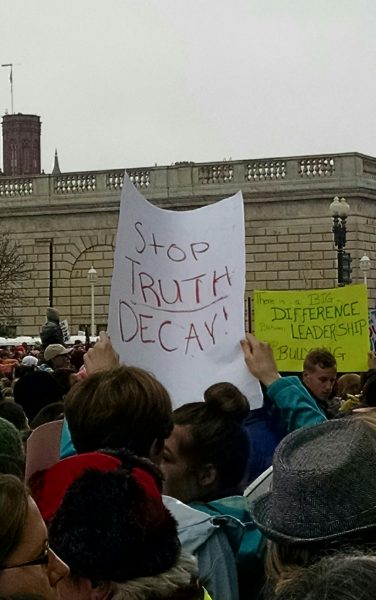 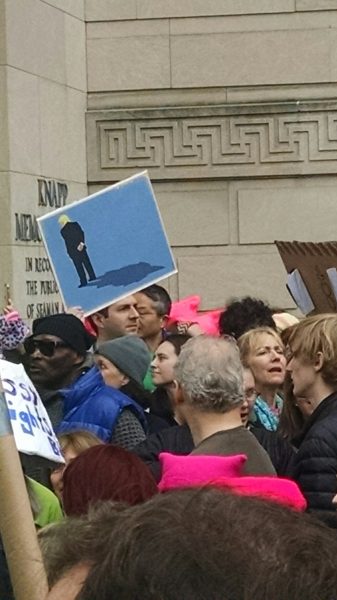 How about a video of the march (thanks to Neil Gillies)

More below the fold: